Loading
Smart Planet | Extinction
Tigers: Can we afford to save them?
Share using EmailShare on TwitterShare on FacebookShare on Linkedin 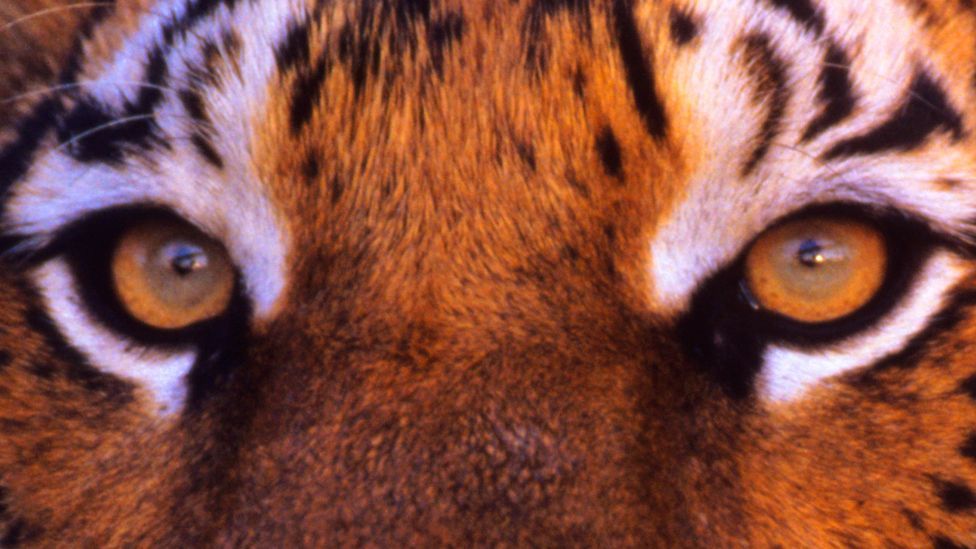 By Gaia Vince 20th March 2012
Conservationists say that the largest of the big cats may go extinct in the wild within two decades. Does it matter?
T

The tiger makes no secret of its danger, prowling around in a yellow and black stripy catsuit, a trend it shares with other perilous beasts from wasps to snakes. And it occurs to me, while I am stealthily stalking one on foot, that this is not the cleverest thing to be doing.

The wooden stick my local Nepali guide, Siteram, is carrying does little to reassure me as we follow the enormous prints through the dry forest of Bardia National Park in the far-western lowlands of Nepal, home to the country's largest remaining population of Bengal tigers. Nobody knows how many tigers there are in the park because years of insurgency in Nepal have made it difficult to carry out surveys. However, with tiger parts attracting a high price on the Asian health potions market, poaching remains a highly profitable prospect in this impoverished region.

As wild tigers (Panthera tigris) become scarcer, the price on their heads goes up: tiger bones are sold for hundreds of dollars in Taiwan, Korea and China, according to WWF figures. A bowl of tiger penis soup (to boost virility) goes for $320, a pair of eyes (to fight epilepsy) for $170, and powdered tiger humerus (for treating ulcers and typhoid) for $3,200 per kilo in Seoul, according to the conservation charity.

I was in Nepal to see one of the country's estimated breeding population of 120 - one of perhaps 3,000 tigers left in the world, down from 100,000 in 1900. They are the largest of the four “big cats”, and used to be found anywhere from Siberia to Bali to Turkey. But hunting and habitat encroachment by humans have over the past century reduced their range by more than 90% and caused the extinction of three subspecies (including the Balinese tiger).

There are now six subspecies left, all of which are classed as endangered or critically endangered by the International Union for Conservation of Nature, including the Siberian tiger, which, weighing up to 660 pounds (300 kilogrammes), is the largest; and the Bengal tiger, which, with almost 2,000 individuals is the most numerous.

More worrying, their numbers have fallen by at least 40% in the past decade alone. Conservationists say that the animals may go extinct within two decades.

But here is the big question: Does it matter if we “run out” of tigers?

After all, most people never get to see them in the wild anyway, and for those who want to, we have ample footage and photographs of them in their natural habitat. Moreover, all the alarming figures above relate only to tigers in the wild – they are far from endangered in captivity. More than five times as many tigers live in captivity as in the wild, perhaps 20,000.

As we bring about what Anthony Barnosky, of University of California Berkeley, and other biologists fear may be the sixth mass extinction in the Earth's 4.5 billion-year history, we are inevitably losing different species. Saving biodiversity would cost $300 billion a year, according to the chief of the UN Convention on Biological Diversity.

If we are not willing to spend that level of money in the Anthropocene, the new “human age”, we are going to have to prioritise conservation efforts towards the species we do want to save. And are wild tigers worth the $350 million global fund set up to rescue them?

There is no evidence whatsoever that potions made from tiger parts have a medicinal effect that cannot be attained using other ingredients. We do not depend on tigers for meat or skins. They do not provide transport or help plough our fields. Unlike their far smaller cousins, you can't keep one at home to stroke and pet – well, not unless you want your face ripped off.

In short, they are useless to us. And as harsh as this sounds, that has been humanity's conservation decider to date: if it is useful, we will keep it; if not, well, I do not fancy its chances. So, while dairy cows are far from endangered, the last auroch, their wild ancestor went extinct in Poland in 1627. Likewise, there are plenty of dogs in Britain, whereas the wolf was eliminated from the island state by the 18th century.

In fact, more than 90% of the weight of all the land vertebrates is now made up of humans and the animals we have domesticated. Megafaunal biomass (that's anything weighing more than 97lbs, or 44kg) is greater now than at any time since humans evolved 200,000 years ago, Barnosky says, despite our voracious impact on everything from giant sloths to North American bison. And that is because of the recent huge population expansion by us and our chosen creatures.

But many people would argue that tigers are an iconic animal; culturally important in several nations. That has not been enough to protect other iconic animals, such as the Asiatic lion, which once ranged from northern Europe down to South Asia and now persists in tiny numbers (reportedly derived from just 13 individuals) in one small reserve in India. Or the Barbary lion, the biggest and heaviest lion that was used by the Romans to fight gladiators, and which went extinct in 1922 when a hunter shot the last one.

The WWF justifies protecting tigers by pointing out the co-benefits for other wildlife. Individual tigers have such a big range that by protecting each tiger, around 38 square miles (100 square kilometres) of forest is conserved, including other endangered animals such as rhinos, as well as the vital ecosystem services humans rely on from food to water management. Because tigers are a top predator, they help regulate and conserve local biodiversity by, for example, helping keep the herbivore numbers down, which allows tree saplings to mature. Conservationists also argue that tigers are good for the local economy because they attract wildlife/eco tourists to deprived areas in the developing world.

So, if we are going to keep wild tigers, how will we do it? Most conservation strategies rely on guarding the cats against poachers and protective farmers. Successful efforts on India have relied on bureaucratic form-filling with identification requirements for everyone who wishes to visit tiger reserves, armed guards and compensation for villagers whose cattle are eaten by tigers.

Habitat conservation is key to preventing the animals' extinction in the wild. Consumers are urged not to buy timber products made from tiger-inhabited forests, such as Asia Pulp & Paper brands accused by the WWF and Greenpeace of rainforest destruction in Sumatra. But consumer pressure is unlikely to be enough. One option might be to improve tigers’ commercial value in the wild through tourism. A plan being mooted to save the orangutan, an endangered ape that shares territory with tigers, is to charge tourists a hefty “conservation fee” to see them. Permits to view mountain gorillas in Rwanda cost at least $500.

Perhaps the biggest problem with conserving the tigers' habitats, though, is that the cats typically inhabit the crowded regions of the world most heavily populated by humans, including India and China. The answer in the Anthropocene, may be assisted migration - to create a new habitat for them in foreign parts.

That's what Li Quan, a former fashion executive is trying to do. Li took two South China tigers, which are extinct in the wild and number less than 60 in captivity – from zoos in China to a reserve she has created in South Africa. There, she hopes to successfully breed them, allow them to learn the skills of a wild tiger, and eventually introduce them into reserves back in China. It is an ambitious plan and one that may be helped by findings that captive tigers in China actually retain broad genetic diversity now lost in their fewer wild relatives, meaning that there is a the possibility of “rewilding” tigers. And this genetic wealth also allows for the option of cloning tigers, should we be reduced to the last few.

Ultimately, the reason for conserving tigers may be less to do with their ecosystem or tourist economy benefits, but simply because they are magnificent creatures. "We have a moral and ethical imperative to save them in the wild," Barnosky contends. "I don't want to be part of generation that destroyed the last wild tiger."

I too like knowing that there are still tigers living in the wild. Back in Nepal, I hear the unmistakable sound of bones being crunched by a hefty jaw. Siteram motions for me to remain still, while he tiptoes forward. I can smell the tiger now – an incredibly strong musky odour, mixed with the scent of meat – and I start to sweat and my knees tremble a little. As I round the bush, a dry twig snaps loudly beneath my foot and I catch sight of a blur of powerful movement. With a massive bound, the enormous flame-coloured beast leaps away, disappearing deep inside the forest.

It is still warm where he had been lying, with fresh blood and chewed up deer bones. It takes a while for my heart to return to its usual pace, but it takes longer for the grin to fade. That heart-thudding glimpse of copper fur “burning bright“ will stain my memory forever; it will be truly devastating if mine is the last generation to have this experience.

One of around 3,000 tigers left in the world, down from 100,000 in 1900. Conservationists fear that tigers may go extinct within two decades. (Copyright: Science Photo Library)

One of around 3,000 tigers left in the world, down from 100,000 in 1900. Conservationists fear that tigers may go extinct within two decades. (Copyright: Science Photo Library) 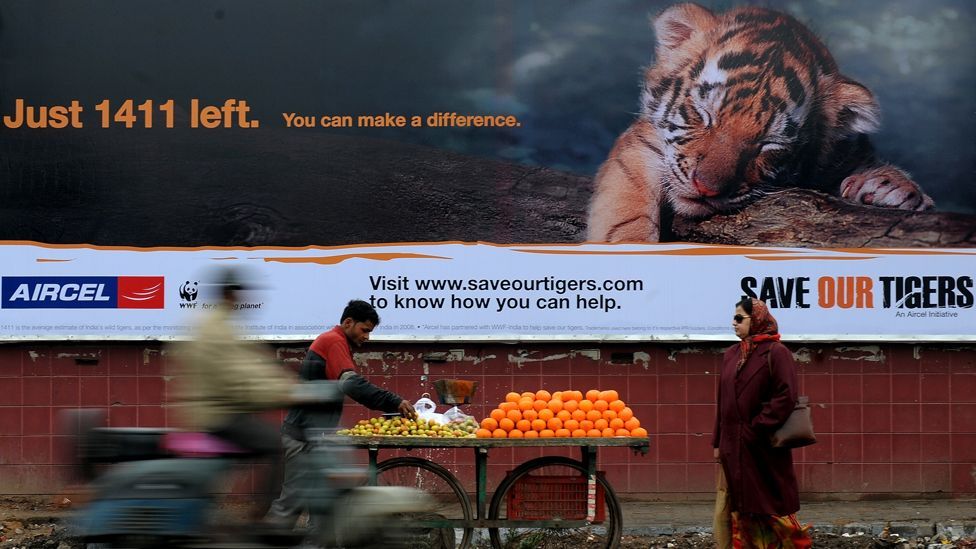 A spate of recent awareness-raising efforts in India provide a constant reminder about the dwindling tiger population. (Copyright: Getty Images)

A spate of recent awareness-raising efforts in India provide a constant reminder about the dwindling tiger population. (Copyright: Getty Images) 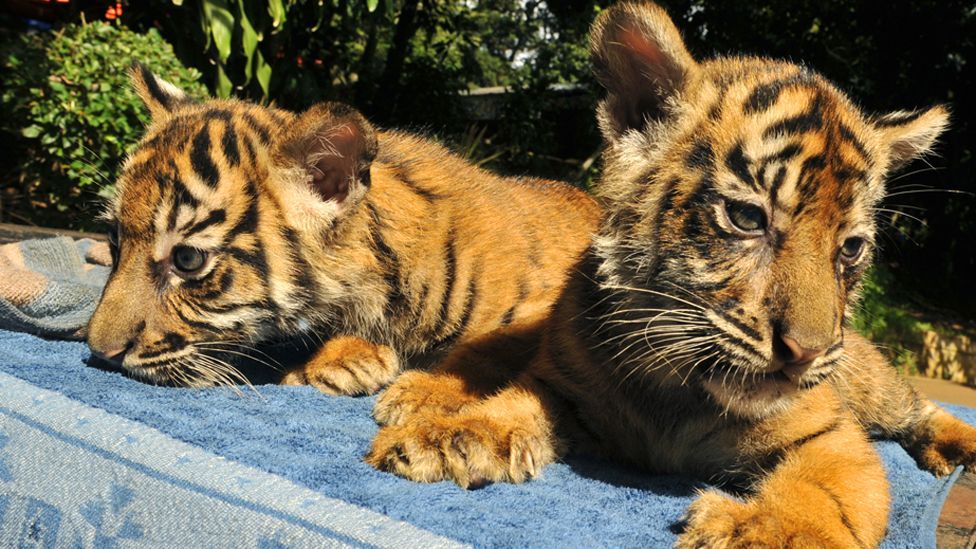 The Indonesian government is trying to save endangered tigers from extinction by allowing people to adopt captive-born animals for $100,000 a pair. (Copyright: Getty Images)

The Indonesian government is trying to save endangered tigers from extinction by allowing people to adopt captive-born animals for $100,000 a pair. (Copyright: Getty Images) 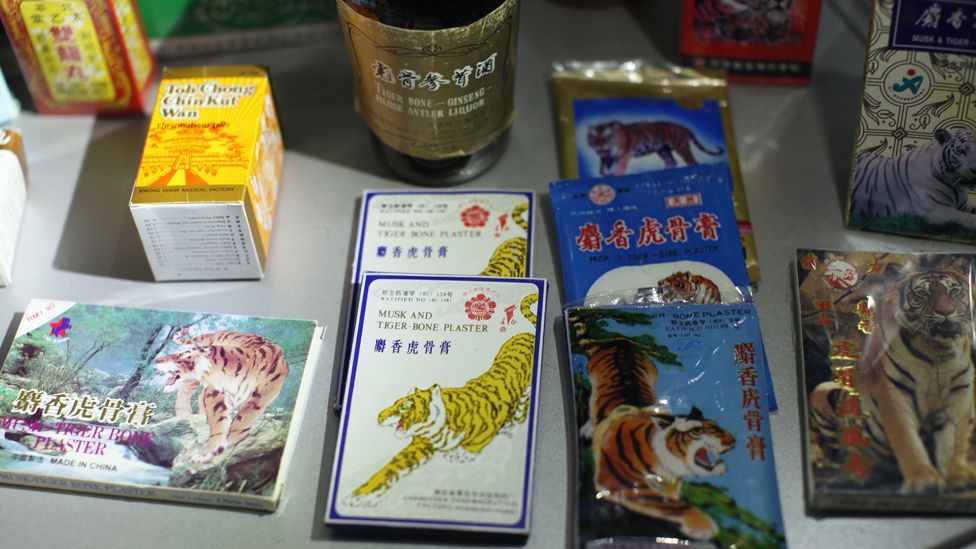 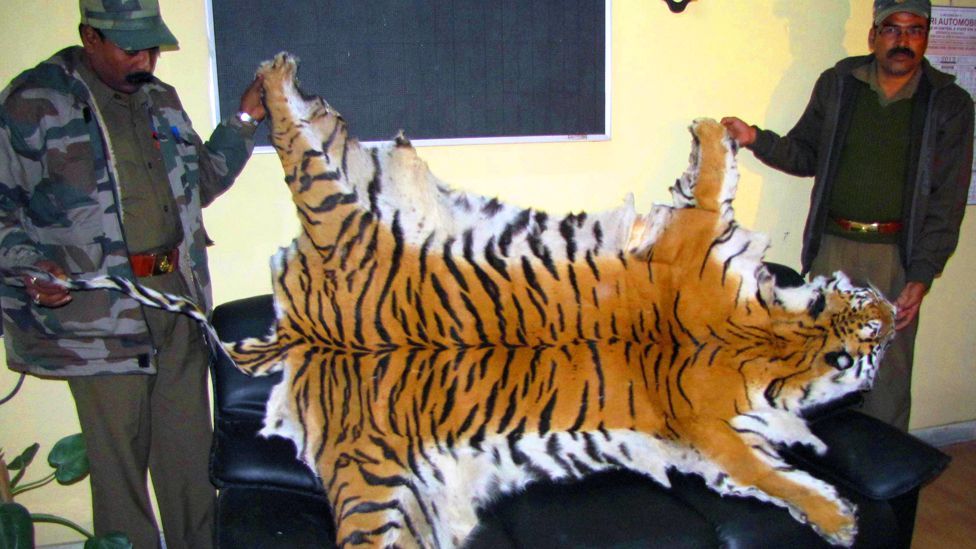 Tigers are being hunted to extinction for their skins, bones and claws. Indian customs officials hold a Bengal tiger skin seized in January this year. (Copyright: Getty Images) 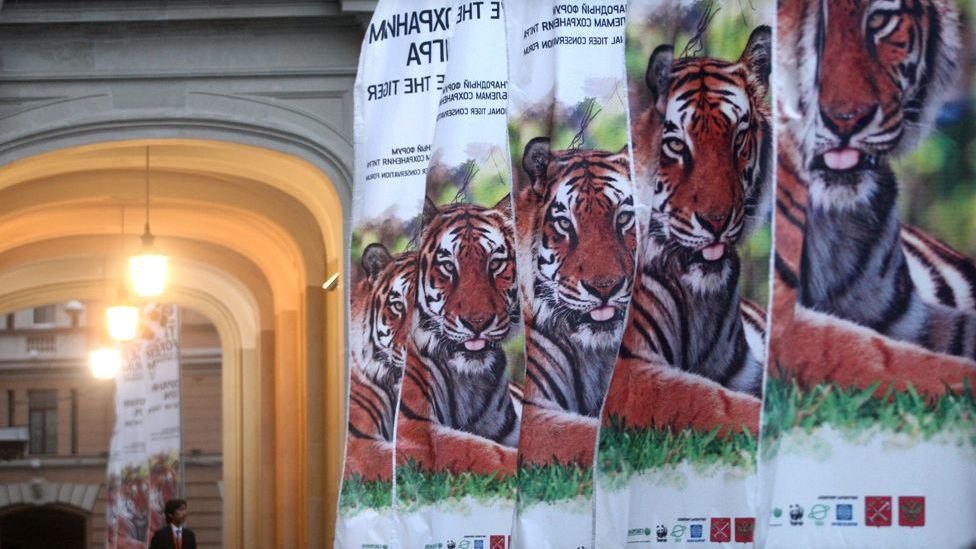 In a desperate effort to save the tiger from extinction, world leaders met in 2010 to raise the millions of dollars they hope will double numbers by 2022. (Copyright: Getty Images)

In a desperate effort to save the tiger from extinction, world leaders met in 2010 to raise the millions of dollars they hope will double numbers by 2022. (Copyright: Getty Images)

In Depth
1Can we resurrect extinct species?
2Could Africa save China's tigers?
Around the BBC