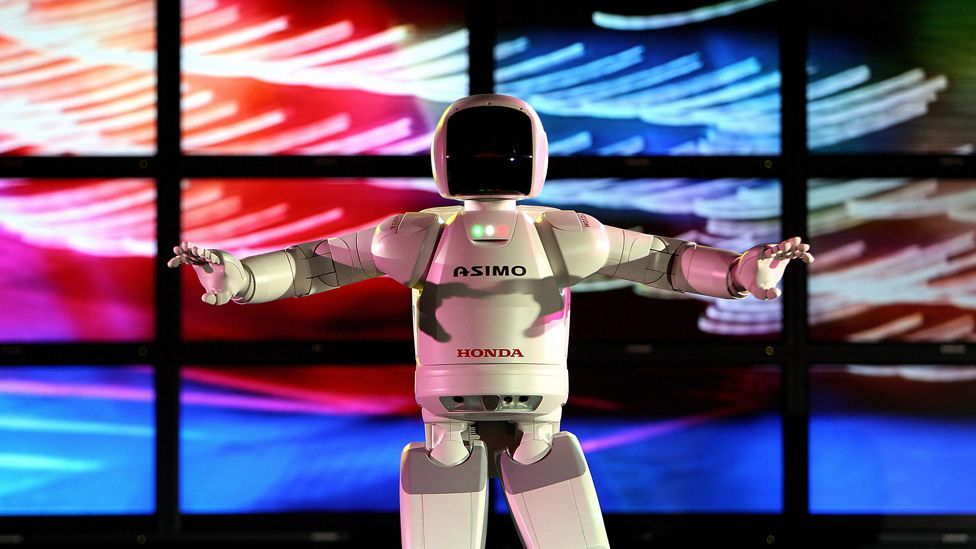 By Quentin Cooper 18th November 2014
Our mental fantasy of what a robot should look like is so clouded by movies that many of us would struggle to identify a real one, writes Quentin Cooper.
G

Gort in the original The Day The Earth Stood Still; Bender from Futurama; the huge Talos in Jason & The Argonauts; Robby in Forbidden Planet; the Gunslinger in Westworld; Huey, Dewey & Louie in Silent Running; ED-209 from Robocop, and the (admittedly obscure) Yo-Yo in 70s TV series Holmes & Yo-Yo. They’re just a few of my favourite film robots, and that’s without bringing in androids, replicants, cyborgs or semi-sentient computers.

The list rushed through my head this week when I read the news that the online bookstore-turned Aladdin’s cave Amazon had bought a robotics firm called Kiva. Could the firm do for robotics what its Kindle has done electronic books? Would we all soon have sophisticated personal robots at our side... or at least to tuck us up in bed with an electronic story? In short, the answer seems to be a disappointing no. Kiva builds “order fulfilment solutions” – hi-tech, and no doubt sophisticated, orange wagons for retrieving orders in warehouses. But orange wagons nonetheless.

Like a lot of people, I find it hard to separate robots that exist from their all pervasive fantasy-world counterparts. In part, that’s because ever since George Melies’ The Clown and the Automaton in 1897 we have been fed a slow drip diet of walking, talking mechanoids. And there’s always something new along to reinforce it: like the recent Simpsons episode where Mr Burns replaces all the power plant workers with Asimo-style robots, all voiced by Brent Spiner, best known as Star Trek’s android Data.

The real ones have walked or, far more often, not walked among us for over half a century.  They are in every part of the world in ever increasing numbers – an estimated 150,000 new ones took up their places last year (according to the International Federation of Robotics).   And yet the mental profile many of us have of them is so inaccurate we would struggle to identify a robot if it appeared in front of us.

Unimate, the first industrial robot began working at a General Motors factory in New Jersey in 1961, lifting and stacking chunks of hot metal straight from a die-stamping machine.  Its inventor, who had the wonderfully futuristic name of George Devol, only died last year. Although Unimate was an impressive bit of design, robots have taken huge strides since then – not literally, that’s The Iron Giant you’re probably thinking of – with major advances in every aspect of how they look and see, react and interact, compute and cogitate.

And nowhere is that more apparent than in Japan – one of the few societies that has embraced robots “in the wild”. There, robots are considered one of the country’s best hopes of meeting the challenge of its ageing population - there are now more than five million people in the country born before the word “robot” was even introduced by Karel Capek in his 1920 play R.U.R.

As a result, Japanese researchers recently unveiled a whole mechanised army developed specifically to tend to the elderly, from the Hospi-Rimo robot to keep them linked to doctors and others, to a 24 fingered hair-washing robot, to a robot bed that morphs into an electric wheelchair.

If that sounds like a seniors version of Transformers, then there’s definite shades of Iron Man to another of their advances - a robotic suit designed to give the infirm extra strength and mobility.  I have visions of Tokyo at the mercy of a new kind of armoured centurion, 100+ year olds stomping around in all all-powerful exo-skeletons like wrinkly Mechagodzillas.

Of course the reality of most robots is that they are designed to do all sorts of repetitive, difficult and dangerous tasks - including, perhaps most famously, the kind of bomb disposal shown in 2009’s The Hurt Locker. The trailer-towing machine in the film’s opening scenes is an HD-1 made by Tennessee company Remotec, and it’s almost unique in cinema history in being a reasonably faithful representation of a robot.  Particularly because the HD-1 isn’t made to look slickly hi-tech: it requires delicate handling and struggles with the conditions.    It features in one of the tensest sequences in a recent best picture Oscar-winner....and yet I doubt anyone would nominate HD-1 – even if they knew its name – as a favourite fictional robot.

The dominance of the real by the imaginary is so great I used to wonder what would happen if you went out on the street with a mime artist dressed in something that looks vaguely futuristic and with their face painted silver, and got them to slowly and “robotically” respond to commands.   I suspected quite a few passers-by would be likely to believe this was the latest robot out of the labs in Japan.   More likely than if you showed them a bed that transformed into a wheelchair or something with 24 fingers that gave you a cut and blow dry.

I say used to wonder, because earlier this week I was talking to one of the UK’s best known roboticists, Noel Sharkey, Professor of Artificial Intelligence and Robotics at Sheffield University, and I told him about my robo-mime idea.  “Already been done”, he told me.  “I know a couple of ‘people robots’ who act it out all the time”.   And is anyone fooled?   “Really fooled”, he laughed, “one of them was pretending to be R2D2 in Dublin and she got kicked down the stairs... by boys who thought she was a machine.   So she was pretty convincing even when she screamed”.   Maybe that’s a job for a real robot instead.

Image of medical droid 21-B courtesy of Boogafrito on Flickr under Creative Commons licence. Image of Robonaut from the Nasa Robonaut Flickr stream. 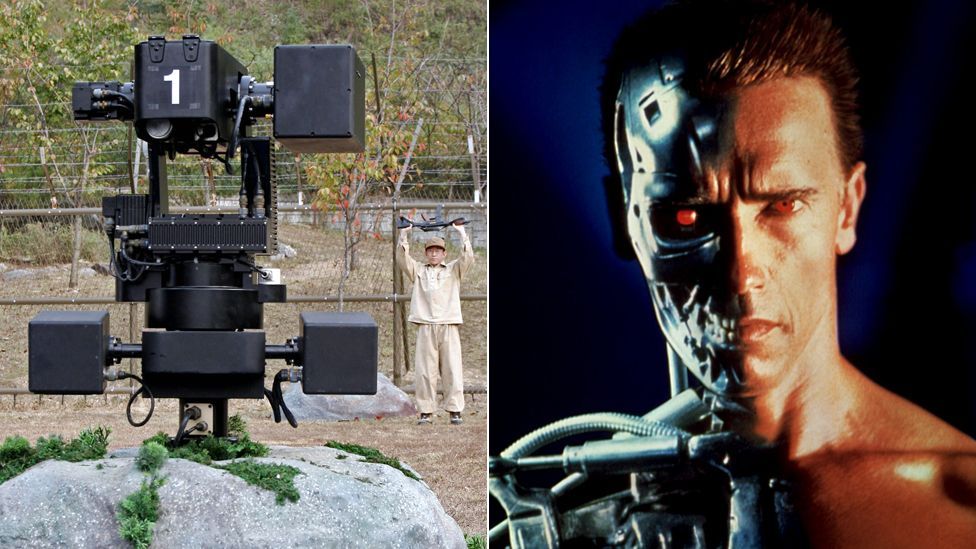 Real robots can fall short of movie fantasies. But a gun-toting sentry on the border of North and South Korea evokes the Terminator films. (Copyright: Getty Images, Rex Images)

Real robots can fall short of movie fantasies. But a gun-toting sentry on the border of North and South Korea evokes the Terminator films. (Copyright: Getty Images, Rex Images) 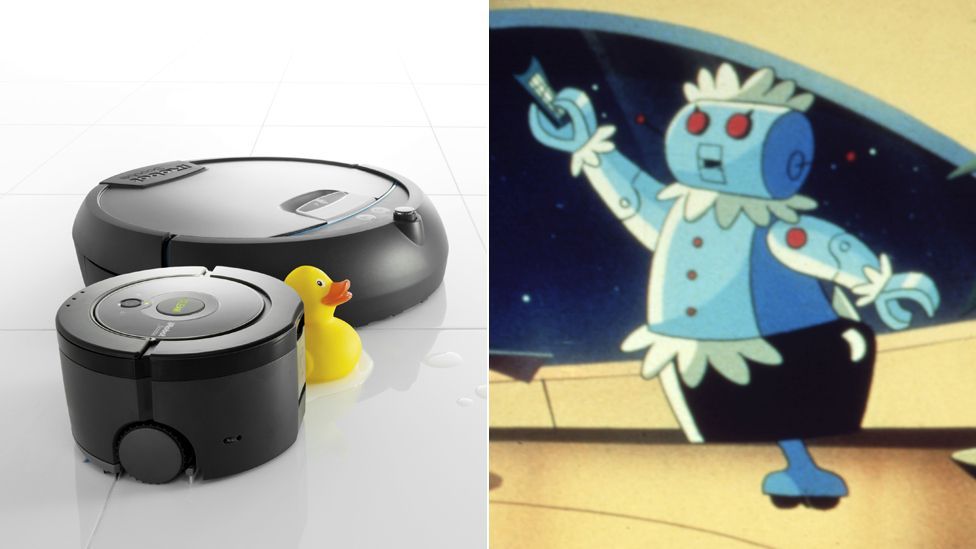 The iRobot Scooba (l) is designed to clean floors but has a long way to go before it catches up with Rosie, the domestic robot in the Jetsons.(Copyright: iRobot, Rex Images)

The iRobot Scooba (l) is designed to clean floors but has a long way to go before it catches up with Rosie, the domestic robot in the Jetsons.(Copyright: iRobot, Rex Images) 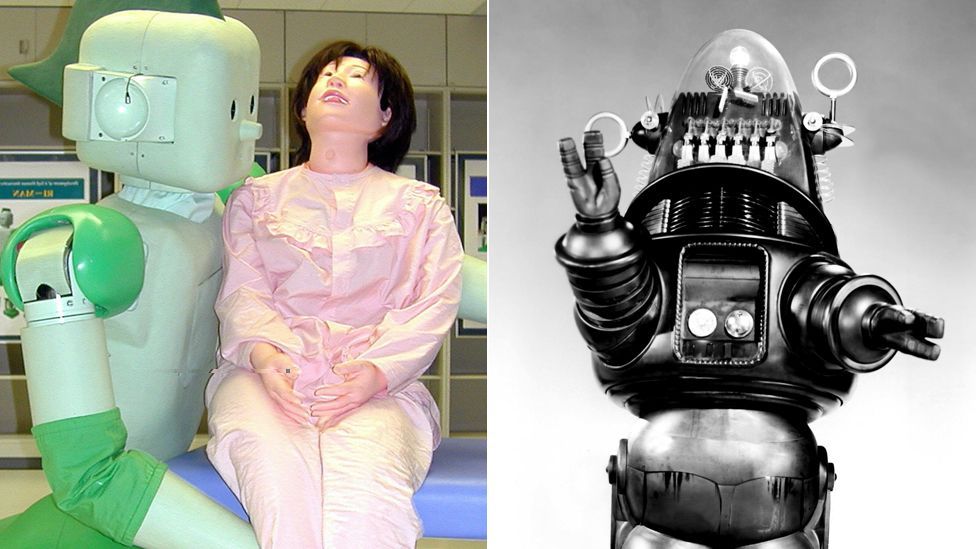 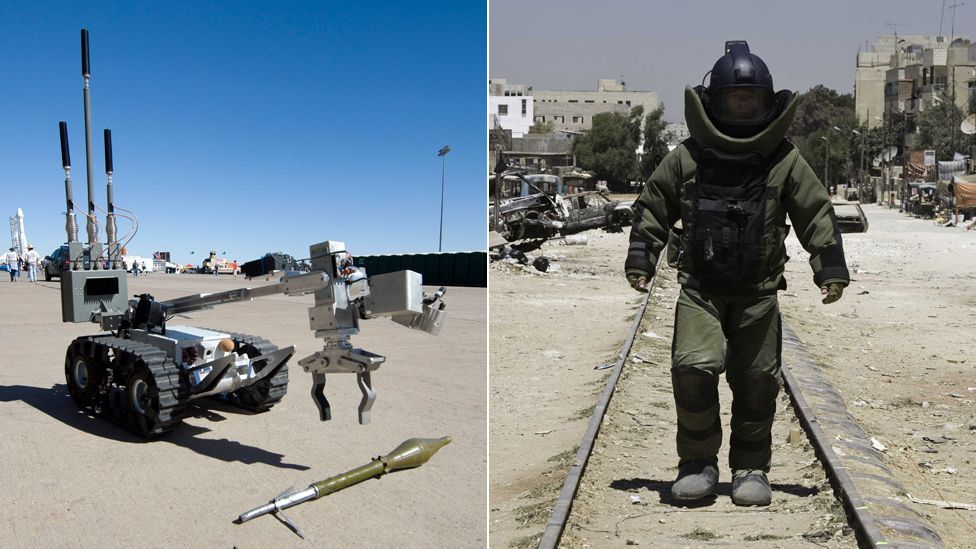 The remotec HD-1 bomb disposal robot (l) seen in the Oscar-winning film The Hurt Locker was one of the few robots that accurately portrays real life. (Copyright: SPL, Rex Images)

The remotec HD-1 bomb disposal robot (l) seen in the Oscar-winning film The Hurt Locker was one of the few robots that accurately portrays real life. (Copyright: SPL, Rex Images) 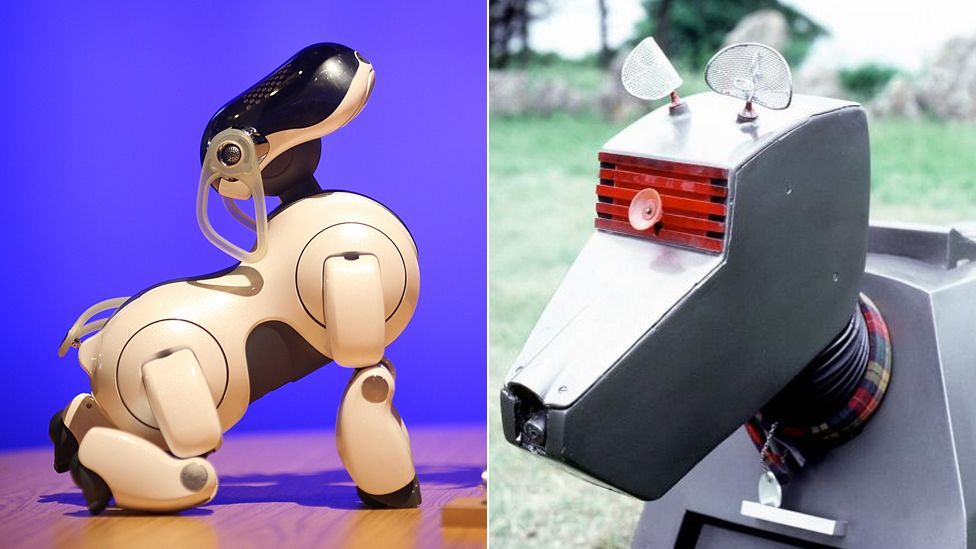 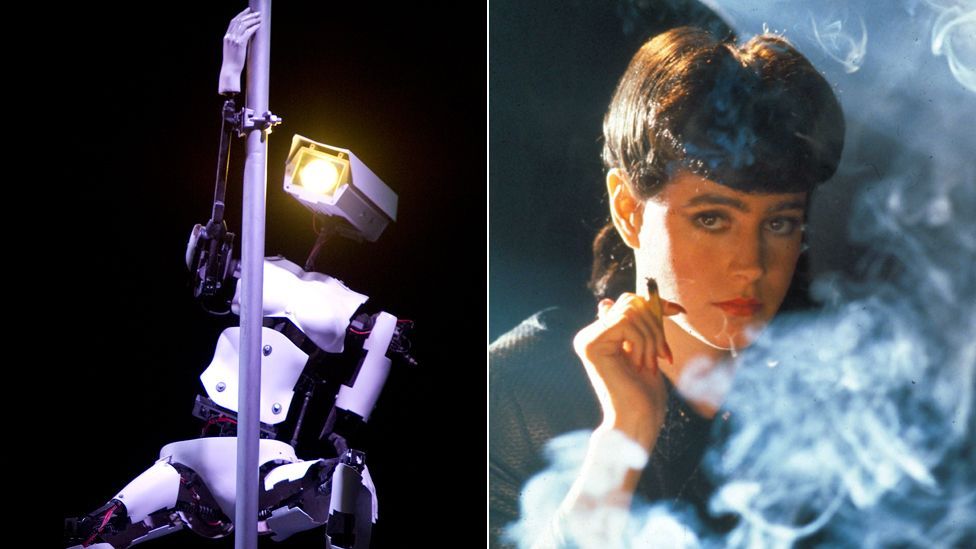 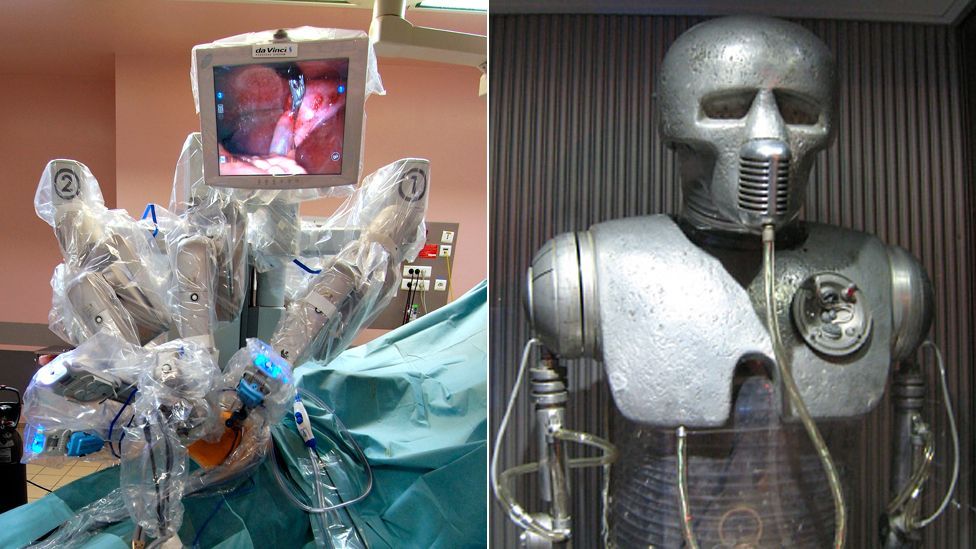 The Da Vinci system (l) allows surgeons to carry out precision work, but has a long way from the medical droids seen in the Star Wars films. (Copyright: SPL, Boogafrito on Flickr)

The Da Vinci system (l) allows surgeons to carry out precision work, but has a long way from the medical droids seen in the Star Wars films (Copyright: SPL, Boogafrito on Flickr) 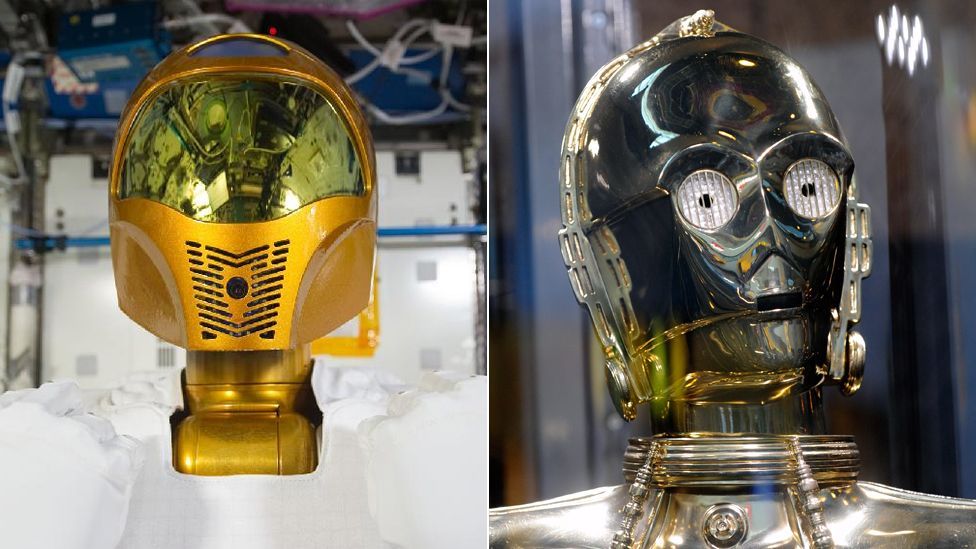