Lurid pictures from the last 100 years show the idea of military drones – and removing humans from the battlefield - has a long history.

Readers of the Fresno Bee may have choked on their ham and eggs when they opened the paper on a Thursday morning in 1934.

Under the headline, “Gigantic robots, controlled by wireless, to fight our battles”, the Californian paper ran a sensational – and terrifying - story about the impending future of warfare.  The article detailed a talk in Paris by French scientist and military engineer Professor [Felix Gaston] Gauthier in which he disclosed that “two pacifistic-minded nations” were “secretly (and supposedly unknown to each other) planning to construct gigantic fighting robots.”

"These mechanical soldiers," declared Professor Gauthier, "will be of unexampled proportions. My informants, whose authentic statements I have never had reason to question before, have conveyed to me the startling news that each of these nations hopes someday to build robots 1,000 feet high!"

The piece went on to describe how these machines “could crush the largest and most powerful war tank ever built by merely stamping on it”. And, in case readers were stills struggling to imagine the size and power of these mechanical beasts, the newspaper ran a clarifying picture of two of them fighting – one raising a mace over its head ready to deliver a final blow to another automaton, which is lying on the ground amidst the wreck of buildings and tanks. The caption reads: “In the event that the two 1,000-foot-tall enemy robots ever come face-to-face they will pound each other with their might, square iron fists, kick with their great steel legs and struggle to destroy each other while skyscrapers all around them fall to the ground”. Quite how these machines were to be built with the technology of the day was a minor detail.

But, whilst it is easy to look back and smirk at articles like this, it should be seen in the context of the day. World War I – and the destruction it wrought - was still fresh in the minds of the “Lost Generation”. More than 9 million soldiers were killed, largely because technological advances such as machine guns, tanks and mustard gas. At the same time, the clouds of war were once again building over Europe. People were clinging on to any hope that the “madness of 1914” could be averted or – if another war was likely – that it could be fought without another terrible loss of life.

The answer, at least to some people’s minds, was the robot. These word “robot” was only invented in 1920 but the concept had started to gather steam in the preceding war years.

Take an October, 1918 issue of Electrical Experimenter - published just a month before the end of WWI. The magazine was the brainchild of It showcased one of Hugo Gernsback, the “father of science fiction”, and it featured one of his most radical and yet most prescient ideas for the future of war: the “Automatic Soldier.”

“As science advances, and as all sorts of infernal machines are thrown into a modern war, the men in the front line trenches become less and less anxious to bear the full brunt of high explosive shells, gas attacks, liquid fire and what not,” the article reads. “No matter how courageous a body of soldiers, their morale is bound to deteriorate considerably under a murderous mustard gas attack, or under a modern barrage.”

Gernsback’s  design was inspired by a Danish engineer who had obtained patents on such an invention. Pictures show a fleet of these red droids proceeding along the trenches laying waste to a fragile – and obviously German – enemy.

Over the years – and with the approach of another war - terrible visions like these increased. For example, the July 28, 1935 San Antonio Light (San Antonio, TX) features illustrations from artist Erik Nitsche. These robots had machine guns for heads, robot scouts with movie camera faces, a twenty-five tube robot military band, and even a robot hospital for the repair of robot soldiers. “When a human soldier gets a bullet in his heart, or in his liver or has himself partly blown to pieces, that is the end of that soldier,” it reads. “Not so with the robot. A new heart can be put in him as easily, almost, as changing a tire.”

The reality, as is often the case, was less sensational. The term “robot” came to life in newspapers to describe the navigation units used by precision bombers that dropped their cargoes on cities across Europe, whilst the German Goliath tracked mine - a remote-controlled demolition vehicle known as the beetle tank to Allies - is regarded as one of the first “robotic” machines on the battlefield. The caterpillar-tracked vehicle was packed with explosives, operated by remote control and designed to drive under – and destroy – tanks. And with that, the robot was no longer an abstraction of the future.

At the same time there was a shift in how the machines of war were portrayed in popular culture.  Prior to the war, the ideas for these fantastic robotic fighting machines often came from amateur inventors and  were depicted in lurid colour in hobby magazines and news papers. These perhaps reflected the public view of warfare but were often a world away from reality.  But, according to Joseph Corn and Brian Horrigan in their 1984 book Yesterday’s Tomorrows, after WWII as the world entered the Cold War era “members of the armed services, in league with scientists and engineers in universities and the defence industry, come to monopolize the crystal ball through which tomorrow’s weapons are glimpsed.

As this view took hold and accelerated, glimpses of the world we live in today become common place, even cropping up in children’s books. “A robot army spearheading an attack could be far more destructive than any human force,” reads a piece in the 1981 kid’s’ book World of Tomorrow: Future War and Weapons. “Its leaders would still be human though. Safely situated far behind the fighting, they would order their robot battalions into action.” The article goes on to detail a future where “small pilotless aircraft packed with sensors and detectors of all kinds to plot enemy positions, measure forces and eavesdrop on their communications.”

Sound familiar? Today, unmanned aerial vehicles (UAVs) commonly fly missions in the ongoing wars in Afghanistan and Iraq. These drones are controlled by human beings in Nevada and for the first time in history the ability to attack an enemy in real time from the other side of the world is a reality.

The robot warriors, envisaged as a response to the horrors of World War I are now a reality. Today, the US military trains more people each year in the operation of unmanned drones than they do fighter pilots. There are currently over 7,000 unmanned aerial drones and over 12,000 robotic ground vehicles on the ground being used by the United State military. A mandate passed by the US Congress in 2002 has even dictated that a third of the US military be comprised of unmanned forces by 2015. It remains to be seen if they’ll meet that goal.

The question, of course, is precisely where the new realities of robot warfare will take us. Just as the first atomic bomb dropped on Hiroshima in 1945 forever changed the reality and scope of war, so too might autonomous robot soldiers shift our understanding of what it means to fight and to wage war.

In some way, it seems my generation - the Millennials - are part of our own lost generation. These technologies mean we have lost any connection to war and the real world destruction that it brings. By wrapping ourselves in pixels and coaxial cable we seem to be insulating ourselves from the horrors of the battlefield. At what cost, only future generations will tell. 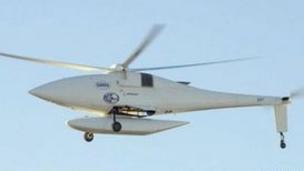 US Army unveils helicopter drone
Around the BBC