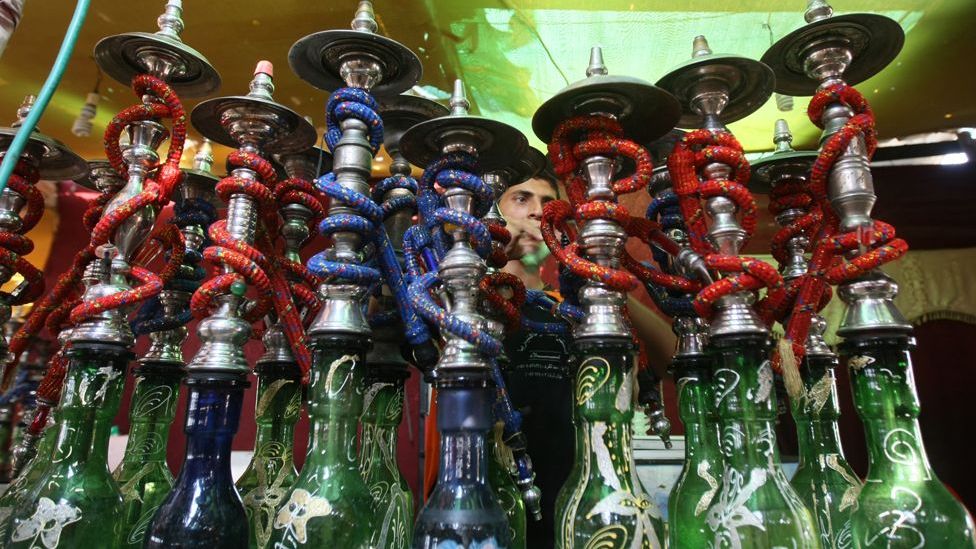 By Claudia Hammond 3rd April 2012
The sweet smelling tobacco is gaining in popularity, but most people who smoke it in cafes are unaware of the potential risks.
Y

You might call it shisha in Egypt and Sudan, nargile in Turkey and Syria or hookah in India. Some are made from clay, others from ornately carved metals or plastics. But the principle is same – these water-pipes allow you to smoke flavoured tobacco as it is bubbled through water. Maybe you know it simply as hubble-bubble.

Sharing a water-pipe is thought to be harmless, relaxing fun. They are now enjoying something of a resurgence in popularity in India and the Middle East, where they are said to have originated. In the Middle East the trend has extended to teenagers and women, many of whom do not smoke cigarettes.

This shisha cafe culture has also extended to Europe, Brazil and the United States. If I run home from my office in London, I pass a street filled with cafes where groups of people sit outside engulfed in clouds of honey-scented smoke. In the United States many hookah cafes have opened in college towns and a recent study found that as many as a fifth of American students have tried it. In many countries these pipes are seen as safe enough to be exempt from legislation on smoking in public places.

But the idea that these pipes are harmless is a myth.

Smoke on the water

One of the main misconceptions is that the risks of tobacco are minimised because it is purified as it passes through the water. But this ignores the complete source of the smoke that enters your mouth.

The tobacco burns in a small dish on top of the main body of the water-pipe. You inhale through a mouthpiece connected by a pipe to a reservoir of water at the bottom. As you breathe in smoke is drawn from the burning tobacco and bubbles through the water and up into your mouth. The tobacco is sweetened with glycerine, which can make it damp, so charcoal is added to keep the tobacco burning.  This means the smoke inhaled derives from charcoal too, and charcoal contains several toxic substances, including carbon monoxide, heavy metals and tar.

Some water-pipes are sold with mouthpieces containing cotton filters or a plastic mesh. This does result in smaller bubbles, but a report by the World Health Organisation says there is no evidence that these mouthpieces reduce the harm.

But surely the water cools the smoke, making it less dangerous than a cigarette?  It is true that this might make an individual puff less harmful, but this does not factor in the quantity of puffs. A typical water-pipe session lasts for at least 20 minutes, often for an hour. So instead of taking 8-12 puffs of a single cigarette a person is inhaling 50-200 puffs in a session. This, in effect, makes it more like chain smoking. In an hour-long session a person can inhale the equivalent of 100 to 200 times the smoke from a single cigarette, which may come as a surprise to most people. A survey carried out this year by the British Heart Foundation found that 84% of respondents thought the amount of smoke inhaled was equivalent to 10 cigarettes or fewer.

In a study in Florida, USA, customers’ carbon monoxide levels were tested as they left bars that allowed the smoking either of cigarettes or hookah pipes. The people leaving the bars that had water-pipes had triple the levels of carbon monoxide in their bodies. Some reported feeling high, which the authors say could have been the early stages of carbon monoxide poisoning.

But what do we know about any long-term consequences? Here, the science is incomplete, as long-term studies of the kind conducted on cigarette tobacco have not been carried out. Researchers admit the evidence is scant, but suggest that smokers of water-pipes could be at long-term risk for nicotine dependence, cardiovascular disease and even cancer.  Professor Hani Najm, Head of Cardiac Surgery at National Guard Health Affairs in Saudi Arabia told me in an interview that he fears that water-pipe smoking could result in an escalation in heart disease in the Gulf States.

So bear in mind one thing. Whether you call it shisha, nargile or hubble bubble, it might smell nice, but it is not as harmless as you might think.

Neurohacks
1Why can smells unlock memories?
2Concerns over shisha health risks
Around the BBC