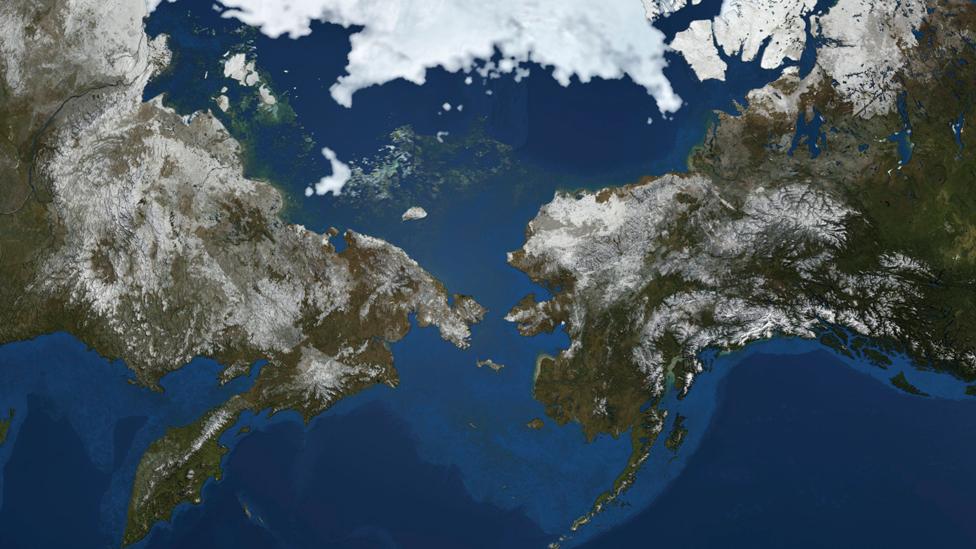 By Philip Ball 13th April 2012
Computer models reveal how small geographic features like the Bering Strait can have a profound impact on the Earth’s climate.
I

It is no surprise that some scientists seeking to develop better computer models that could help us understand and even forecast economic crises are turning to climate modellers for advice and inspiration. Modelling the global climate is as difficult and vexing a problem. You have got to take account of a lot of different factors all at once, not all the relevant processes are well understood, and little things can make a big difference.

Climate scientists have long realised that their computer models cannot be like those commonly used to simulate processes in, say, chemistry: one size doesn’t fit all as it often does (bar minor details) for chemical reactions, and your best bet is to come at the problem from many different angles and pool the findings.

It is for this reason that reporting the results of any climate modelling study is a delicate business. Any one study is typically best viewed not as a prediction of what the Earth’s climate system will definitely do under particular circumstances – without ice caps or the Amazon rainforest, say – but as an example of the range of possibilities. This type of fuzziness does not fit the common perception of science as providing precise answers, and it allows any sceptics who may not properly understand the scientific process to imply that climate models are just ill-informed guesswork.

All this is by way of saying that the striking conclusions of a modelling study of ocean circulation during an ice age should be seen primarily as an indication of how subtle geographic features can have unexpected, far-reaching impacts on climate.

The work suggests that the 50-mile (80-km) -wide Bering Strait between Russia and Alaska acts as a sort of valve that can permit or shut down rapid changes in climate. With the Bering Strait open, as it is at present, say Aixue Hu of the National Center for Atmospheric Research in Boulder, Colorado, and his colleagues, it is less likely that we will experience the kind of rapid fluctuations between cold and warmer global climate seen during the last ice age.

In other words, the idea that the climate could suddenly swing back and forth in just a few decades seems to be one thing we do not need to worry so much about in a world overheated by greenhouse gases.

The discovery of such abrupt jumps in climate, called Dansgaard-Oeschger cycles, shocked climate scientists when they saw their chemical signature in columns of ice drilled from the Greenland ice sheets. These ice columns, which provide records of climate going back a few hundred thousand years, revealed that at least 25 of these episodes of sudden warming and cooling occurred during the last ice age, sometimes with regional average temperatures changing by as much as 8C (14F) in 40 years. That sort of leap in today’s world would be catastrophic.

It is still not clear what caused these sudden changes, but palaeoclimatologists (who study ancient climate) generally agree that it has something to do with the way water circulates in the North Atlantic Ocean. This circulation is like a gigantic conveyor belt that carries warm water polewards in an upper-ocean current, where it cools and becomes denser, sinking to the deep ocean and flowing back towards the equator. These currents shift huge amounts of heat across the planet, and so strongly affect climate.

The water density also depends on how salty it is. One popular idea is that the Dansgaard-Oeschger cycles happen when an ice age starts to wane, causing massive amounts of ice to break off from the polar ice sheets and melt. This injects fresh water into the North Atlantic, and the less salty water is less apt to sink at the turning point of the conveyor belt. So the circulation gets much weaker, or perhaps even switches off. As warm water then no longer flows towards the pole, temperatures there drop abruptly and the glacial climate recovers its grip.

Water entering from the North Pacific through the Bering Strait also affects the North Atlantic circulation, since this water contains relatively less salt. The Bering Strait seems to have opened up between seven and four million years ago. But it is quite shallow, and when sea levels dropped profoundly during the last ice age because so much water was locked up in the great ice sheets, the strait became a land bridge again between America and Asia.

Noting that the existence of this land bridge coincides with the period of Dansgaard-Oeschger cycles, Hu and colleagues ran a climate model to see whether the two are connected. They found that the weaker circulation in the North Atlantic while the strait is open does not have the on/off modes that are probably responsible for sudden climate change. The potential for switches only occurs when the Bering Strait is closed by a fall in sea level. The details are complicated, but in essence an injection of fresh water into the North Atlantic by ice-sheet break-up cannot then flow (in part) into the Pacific, and so the circulation is more liable just to get switched off.

This is not the first suggestion that the Bering Strait represents a climate switch. Two years ago Hu’s team simulations showed that the same factor – turning on and off the influx of fresh North Pacific water through the strait – can affect the growth and decline of the great ice sheet covering much of North America during an ice age, with consequent changes in sea level. But only now do they make the link to abrupt climate change. Quite aside from offering a shred of comfort in the face of global warming – there is enough to worry about already – the work offers a reminder of how much climate can depend in subtle ways on the very lie of the land.