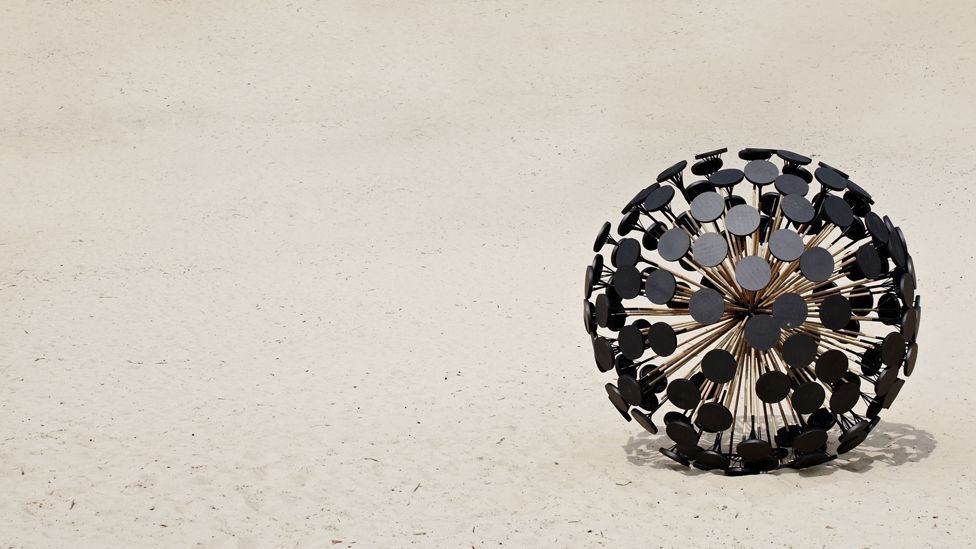 By Clark Boyd 18th November 2014
A simple device that is designed to clear some of the millions of landmines scattered around the world offers a lesson in thoughtful design and adaptation.
T

The global statistics on land mines and their effects make sobering reading. According to the United Nations, up to 110 million mines have been laid across more than 70 countries since the 1960s and that between 15,000 and 20,000 people die each year because of them.

Many of the victims are civilians - children, women and the elderly - not soldiers. Thousands more are maimed. Moreover, mines are cheap. The UN estimates that some cost as little as $3 to make and lay in the ground. Yet, removing them can cost more than 50 times that amount. And the removal is not without human cost either. The UN says that one mine clearance specialist is killed, and two injured, for every 5,000 mines cleared.

One of the worst affected countries is Afghanistan, with an estimated 10 million land mines contaminating more than 200 square miles of land. It is something that Massoud Hassani, who grew up in the northern part of Kabul, knows that all too well. "We lived out by the airport, and there's a big desert out there where all different militaries trained," Hassani tells me. "It was a real war zone. They left a lot of explosives, including land mines."

"But, it was our playground," Hassani continues. "When we were kids, we used to make these wind-powered toys, and play with them on this desert full of explosives, and they'd get stuck out there."

Hassani's family left Afghanistan in 1993, moving around different countries before eventually settling in The Netherlands. Hassani tried studying different subjects, but nothing grabbed him. And then, one day, a colleague at a security company noticed him drawing. "I was doing a job just sitting all day long in a building, and I was sketching because I was really bored. And my colleague suggested that I do something creative."

He eventually ended up at the Design Academy in Eindhoven, where his experience of Afghanistan’s mine fields would serve as inspiration for a unique device. Whilst looking for ideas for his final project, one of his professors suggested he look to his Afghan roots for inspiration. Hassani says he thought back to that desert north of Kabul filled with land mines, and those small, wind-powered toys that used to skip across it. "My teachers told me to make a link between them," Hassani says. And that is how the Mine Kafon was born.

Hassani has designed and built, by hand, a wind-powered ball that is heavy enough to trip mines as it rolls across the ground. Each $50 device looks like an artwork inspired by a starburst. In the middle of the Kafon is a 17kg (37lb) iron casing surrounded by dozens of radiating bamboo legs that each have a round plastic "foot" at their tip. Inside the ball is a GPS unit to map where it has been – and in theory cleared of mines. Around the iron ball is a suspension mechanism, which allows the entire Kafon to roll over bumps, holes and so forth. In all, it weighs a little more than 80kg (175lb). The idea is that it is light enough to be pushed by the wind, but heavy enough to trip mines. Hassani thinks that humanitarian organizations could take Kafons with them into areas suspected of being mined, and then let the wind do the dangerous work.

"Nowadays people search for mines by hand, and it takes a lot of time," Hassani says. "People walk along, sticking things into the ground. Many are not trained to do it, and there are a lot of accidents." He believes that the mine Kafon could be a safer, and cheaper, alternative. He has spent the last year and a half improving his invention, has also teamed up with the Dutch military and the country's Explosive Ordnance Disposal (EOD) unit to test it.

"When we work for the UN we have to prove that an area is 98% clear of mines and fragments," says Henk van der Slik, head of the Dutch EOD unit, who has 23 years of experience in de-mining.
"Normally, we use dogs and mine-detectors. Even if a mine has less than one gram of metal, we can find it."

But, he says, that takes a lot of time and costs a lot of money “because you have to dig out every metal part you detect”.

“You don't know whether it is actually a mine or not until you excavate it," he says.

As a result, you would think that devices like the Kafon, which in theory can speed up this process or take some of the danger out of the equation, would be seen as a quick and easy win. Unfortunately, the tests did not draw the same conclusion.

"It's not suitable for de-mining activities," was van der Slik’s stark analysis. In other words, if the idea is that the Kafon can hit a mine, survive the blast, and then continue to roll on and detonate other mines and eventually clear an area, then van der Slik says it will not work. As it stands, he says, 100g of explosive (the average for antipersonnel mines) stops the Kafon dead it in its tracks right in the middle of a probable mine field, which would make retrieval and repair very dangerous. There are also a couple of other obvious drawbacks. First, you have to have a wind blowing for the Kafon to move. And second, it will only work on fairly flat and open terrain, like a desert. It isn't designed to move in jungles and the like.

Also, van der Slik notes, "when the Kafon is rolling, it would activate trip wires (on fragmentation mines)." If the mine explodes into fragments, he says, it causes “bigger problems”, because in subsequent sweeps “every fragment will be detected as a potential mine." In other words, more metal pieces mean more work for the human de-miners who have to prove 98% clearance.

So not a resounding success, for what seemed like a good idea on paper. But van der Slik says not all is not lost; Hassani's mine Kafon could have other uses.

"The aim is maybe when you have an area of potential risk, you don't know if there are mines, and people are afraid to go in, then you can work with this design and when you have a detonation, you know there are mines, because mines are never alone," he says. "Then you can mark the area as a dangerous area. It's a more humanitarian aim, for marking a potential area."

It’s an idea that resonates with Hassani who, rather than being disappointed that the tests undermined the original idea for the Kafon, is excited about improving the design so that it can be used in the way van der Slik describes. For example, he tells me, it's clear that he needs to find a way to strengthen the device so that it won't lose as many legs when it explodes. "That's why you do the tests," Hassani says, "to see how it gets damaged."

The Kafon was recently selected as a finalist for the 2012 Design of the Year award at the Design Museum in London. And he says he's working to improve the design of the bamboo-legged device, and is talking with engineers to improve both the form and function of it. He also says he's also working on another, more cylindrical version that could potentially detonate more mines at a time.

Right now, Hassani says, further development of the mine kafon idea is his full-time job. He's actively looking to partner with like-minded organizations, and get enough money to move the project out of the prototype phase and into real field tests.

"If that works," Hassani says, "then we can really ramp up the project." 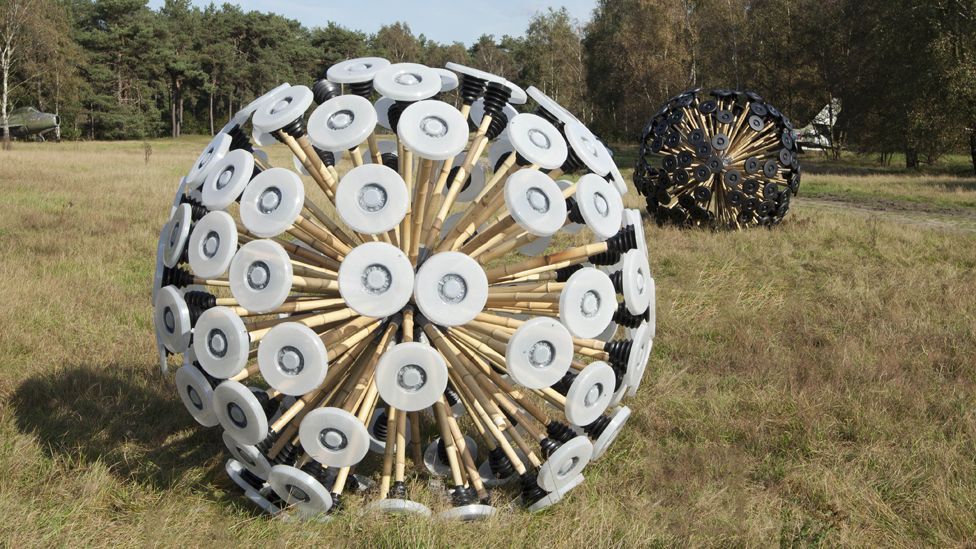 The Mine Kafon is a cheap, wind-blown mine clearance device made primarily from bamboo, plastic and iron. (Copyright: Massoud Hassani)

The Mine Kafon is a cheap, wind-blown mine clearance device made primarily from bamboo, plastic and iron. (Copyright: Massoud Hassani) 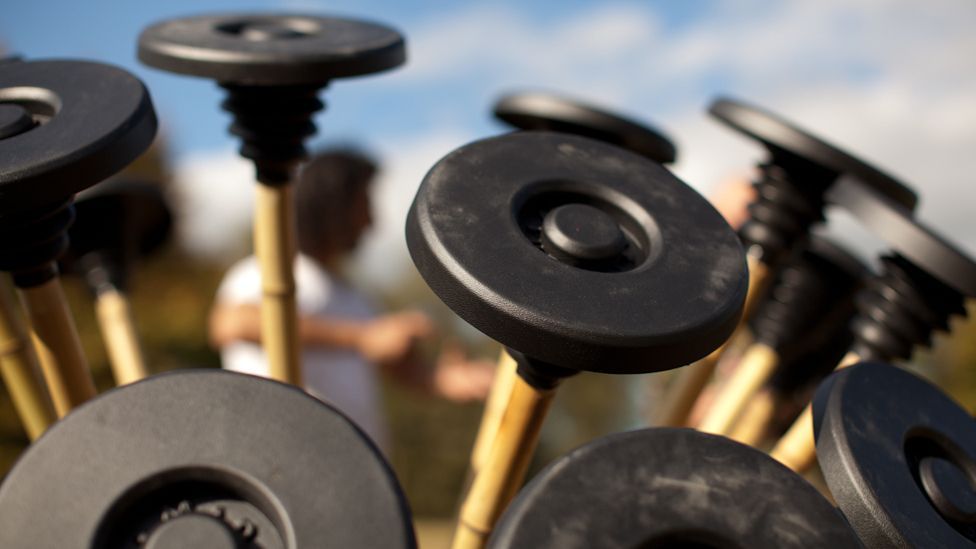 It is the brainchild of Massoud Hassani, an Afghan designer based in the Netherlands, and is inspired by toys he made in his childhood. (Copyright: Massoud Hassani)

It is the brainchild of Massoud Hassani, an Afghan designer based in the Netherlands, and is inspired by toys he made in his childhood. (Copyright: Massoud Hassani) 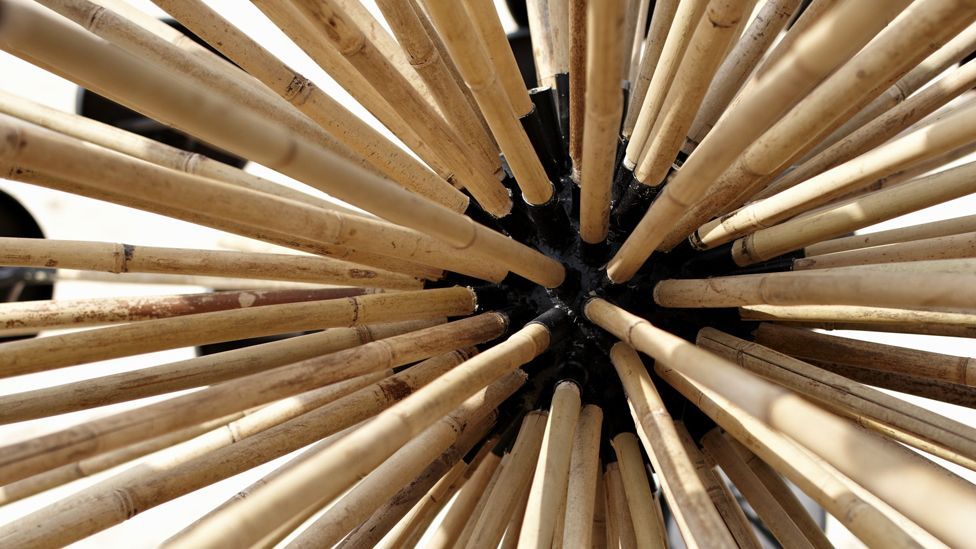 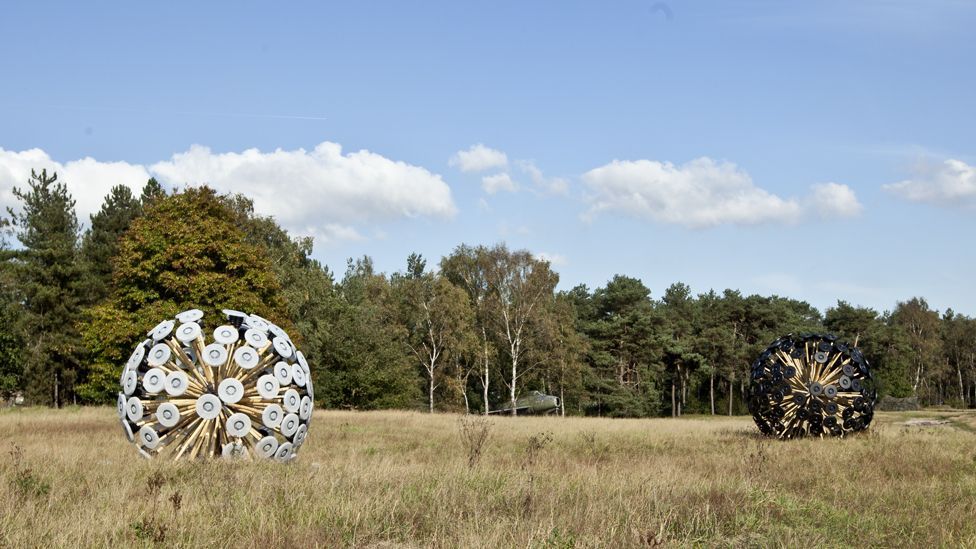 It is designed to be light enough to be pushed by the wind, but heavy enough to trip mines as it rolls over them. (Copyright: Massoud Hassani)

It is designed to be light enough to be pushed by the wind, but heavy enough to trip mines as it rolls over them. (Copyright: Massoud Hassani) 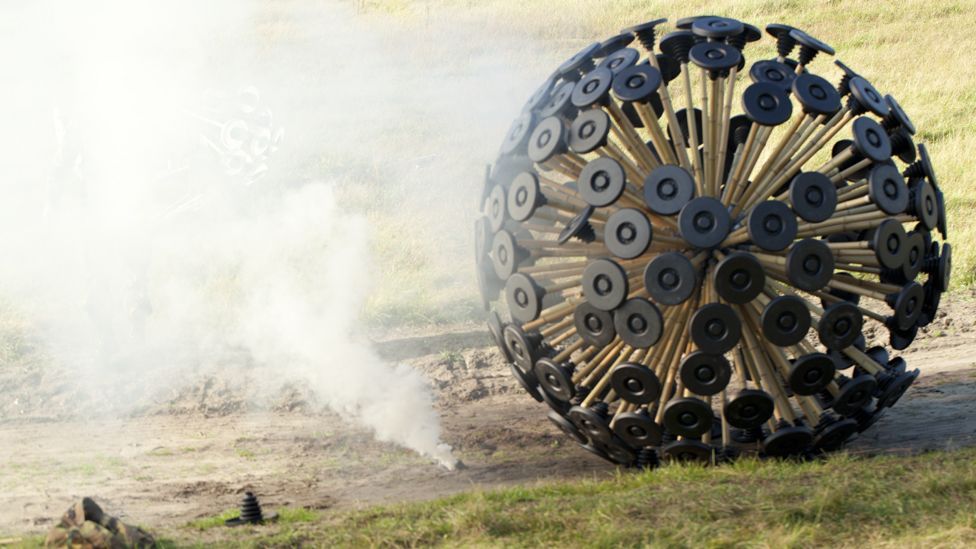 The device has been tested by the Dutch military to see if it can help clear some of the millions of mines scattered around the globe. (Copyright: Massoud Hassani)

The device has been tested by the Dutch military to see if it can help clear some of the millions of mines scattered around the globe. (Copyright: Massoud Hassani) 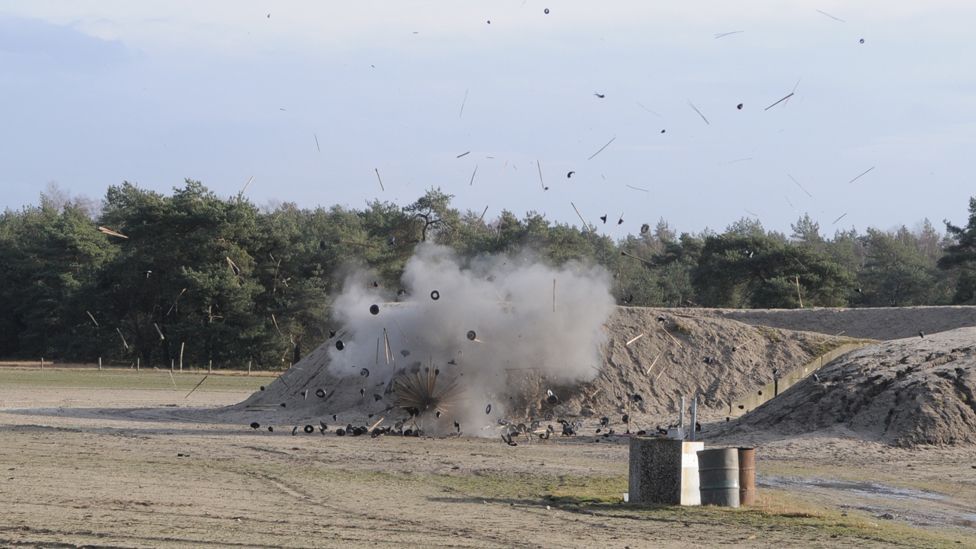 The Kafon, which costs just $50, is designed to destroy itself and the landmine; a problem when trying to clear large areas with multiple mines. (Copyright: Massoud Hassani)

The Kafon, which costs just $50, is designed to destroy itself and the landmine; a problem when trying to clear large areas with multiple mines. (Copyright: Massoud Hassani) 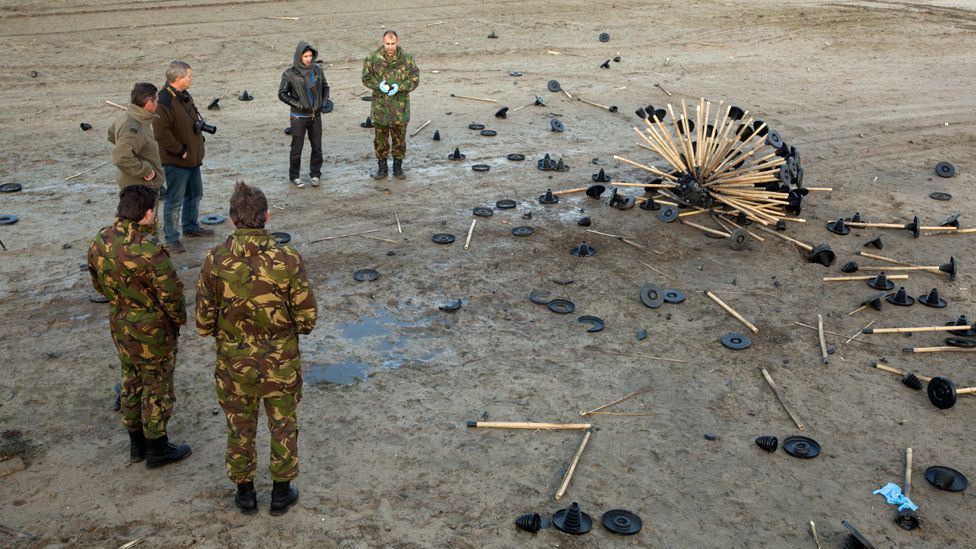 The tests concluded it was not suitable for clearance, but could be used as a cheap and safe way to identify dangerous areas that need demining. (Copyright: Massoud Hassani)

The tests concluded it was not suitable for clearance, but could be used as a cheap and safe way to identify dangerous areas that need demining. (Copyright: Massoud Hassani) 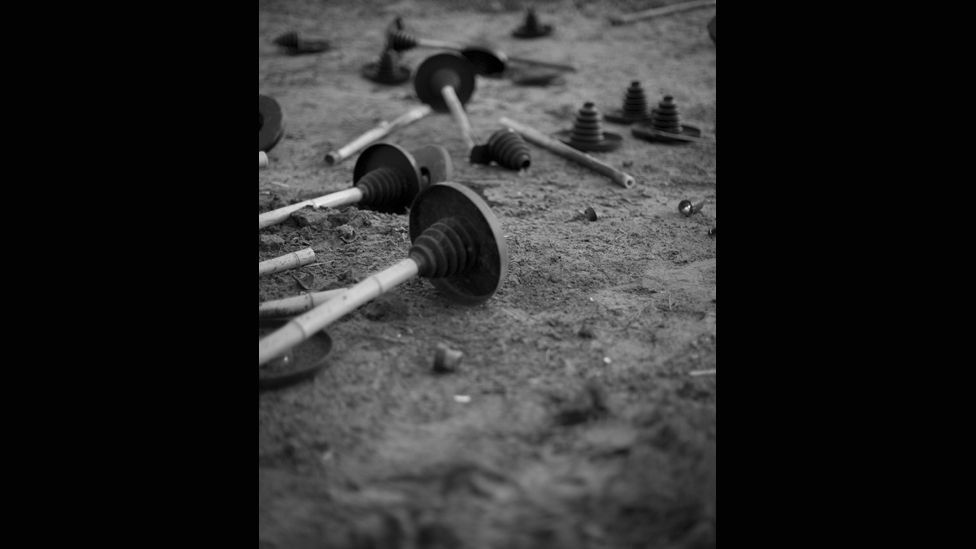