Loading
HyperDrive | Engineering
Maglevs: The floating future of trains?
Share using EmailShare on TwitterShare on FacebookShare on LinkedinShare on Whatsapp 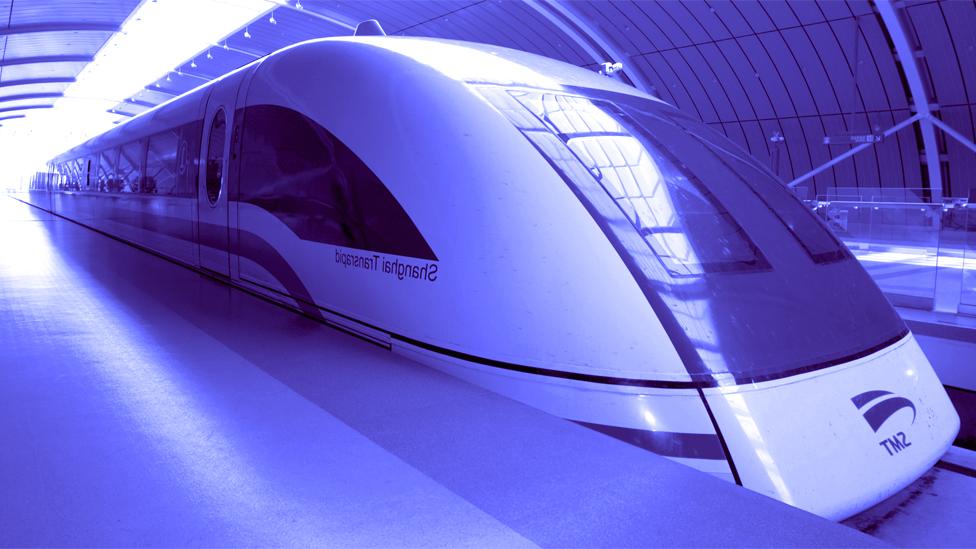 By Jon Stewart 18th November 2014
They have been promised for decades, but is it now finally the time for magnetic levitation (maglev) trains to hit the mainstream?
S
Sorry, this video is no longer available

As a vision of the future it is a little underwhelming. A battered shipping container sits on top of a black platform that straddles a 130m (400ft) raised track. As I climb into the metal box, I note there are no seats and very little to hold on to.

I am still excited though, as I am about to ride the only magnetic levitation, or Maglev, train in the United States, owned and operated by General Atomic.

A red light flashes, there is a jolt and then a sense that we are floating...because we are. The platform beneath the cargo container I am in is being buoyed up and moved along by powerful electromagnets, allowing the train to move with low friction and no moving parts. As we move off, there is hardly any sound. A gentle whine is the only indication of the current flowing through the track below, and the main noise we can hear is trucks on the nearby freeway. As the shipping container gathers speed, the wind blows through the open doors and the ride is smooth and effortless. Just 20 seconds later we are at a standstill, but it is enough to help me understand why proponents believe Maglev systems are the future of trains and high-speed, long-distance travel.

Maglevs are not a new idea. Patents for high speed transportation systems were granted as early as 1907, but it was not until 1984 that the first commercial maglev system was opened at Birmingham international airport in the UK. The 600m (2,000ft) track ferried passengers at 40 km/h (25 mph) for 11 years before it was closed because of maintenance problems. Since then, higher speed prototypes have also been shown-off, with a train in Japan (JR-Maglev) setting a world speed record of 581km/h (361mph) in 2003. But high start-up costs and the dominance of cheap and reliable trains, planes and cars means there are just two commercial systems operating today, one in China and one in Japan.

All Maglevs operate on a similar – and simple – principle. If you have ever played with bar magnets you will probably remember that opposites attract, but if you flip one of the magnets around, then “like” poles repel. That is what keep the mass of a train – or shipping container - floating several millimeters in the air, cutting down on friction and allowing it to travel much quicker than traditional engines. That same magnetic force can also be used to move it forwards.

“All of the propulsion forces come from electromagnetics, as well as the levitation and guidance forces. The trains are entirely magnetically levitated, driven, and guided” says Dr Sam Gurol, director of transportation programs at General Atomics in the US.

But, whilst all systems are based on the same principle, there are lots of different approaches to getting the train to float and move.

Electromagnetic Suspension (EMS) is the most common form of maglev and is the type used in the Chinese system that zips passengers at more than 400km/h (250mph) between Shanghai and Pudong airport. In most cases, C-shaped arms underneath the train wrap around a guideway. Electromagnets mounted on these arms lift it above a steel track when they are energised.  This type of train has the advantage that they can levitate when stationary. Controls monitor and correct the levitation height to between 10 and 15mm, as tiny differences can have a huge effect on the magnetic force.

A second approach is Electrodynamic Suspension (EDS). The difference here is that both the rail and the train are magnetised. The magnets on the train can be either electromagnets, or strong permanent magnets. The track has an array of electromagnets, and when the train is moving at speed the train and track repel each other. This system is self-correcting. The train always levitates at the optimum gap, without the need for expensive or complicated feedback systems. But the downside of EDS is that the train still needs wheels of some sort. At low speeds not enough repulsive force is generated for the train to levitate.

The system I saw at General Atomics is based on a third way, known as Inductrak, which does away with electromagnets in favour of permanent magnets arranged in a special pattern known as a Halbach array, originally designed for particle accelerators.  These concentrate the magnetic field on one side, while canceling it on the opposite side. Like an EDS system, these still needs support when stationary, but levitate at much slower speeds, making them a more practical alternative for systems with multiple stops. Inductrack also has the distinct advantage that in a power failure, the cars slow down on their own, and the levitation gradually lowers as the train slows. It is also thought that over time, this approach may be more cost effective than electromagnetic systems, something that will not be known until commercial system begin to operate.

General Atomics has spent five years refining the power and control systems, and completing a full test programme overseen by the US Department of Transport.

“That test programme was very successful. We completed everything we can do on a test track of this type” says Dr Gurol, who now needs further funding. “The technology is ready to go to the next step. That is a demonstration system carrying either real passengers or cargo.”

But levitating is only half the equation. The trains must also move forward. The most common propulsion for Maglev trains is a linear motor. Coils of wire, mounted in the track, have a current flowing through them in sequence. They operate in a similar way to conventional rotational electric motors, except instead of being wrapped in a cylinder, they are stretched out horizontally.

The Maglev train at General Atomics, however, uses a linear synchronous motor.

“It operates similar to a wave coming towards the shore” says Dr Gurol.  “That wave is not water, but electromagnetic. The surfer rides the wave.”

But in the case of the maglev, the surfer is the train, riding the electromagnetic wave.

This kind of system has several advantages over existing train technology, says Dr Gurol.  “They’re better in bad weather conditions because they’re not driven by friction, and electrical contact doesn’t become an issue.”

“If you look at a typical train… they use electric motors. They need a third rail for picking up power from a guide way. They transfer that power to rotating electric motors on the vehicle, which provide the propulsive forces. That involves gearboxes, all kinds of power equipment on board, and so forth.”

As maglev trains don’t need many of these moving parts, they are subject to less wear and tear and therefore cost less to maintain, their proponents argue. But not everyone agrees, pointing out that there are too few installations to know the true cost.

Those arguments could soon be settled, however, with new systems coming online in Beijing, China and Seoul, Korea, in the coming months. And others systems are planned in Puerto Rico, Venezuela, Europe and Australia, for everything from low-speed urban transporters to high-speed transcontinental routes that could challenge plane travel. Some have even speculated that a Trans-Atlantic tunnel could use the technology. If and when that happens, I would recommend something more comfortable than a shipping container to ferry the passengers.