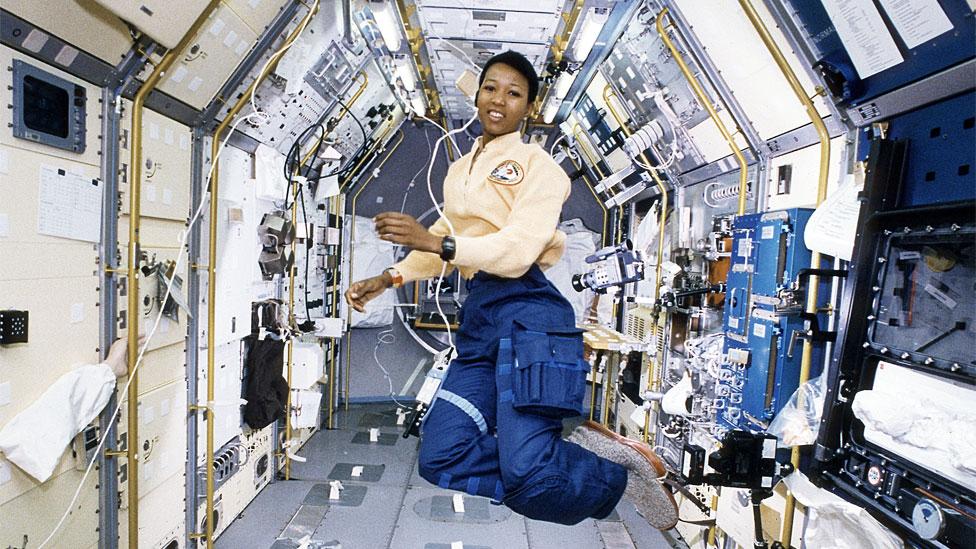 By Sharon Weinberger 18th November 2014
Mae Jemison fulfilled a childhood dream to travel to space. Now she wants to take humanity to the stars.
T

Today, Mae Jemison may be best known as the first black female astronaut to travel to space, but someday she could be known for something much more monumental. That’s because she is now at the helm of what could well be the most audacious project ever imagined: a Pentagon-funded effort meant to lead within 100 years to a spaceship that will take humans to the stars.

The 100-Year Starship, funded by the Defense Advanced Research Projects Agency (Darpa), isn’t about building the Starship Enterprise, at least not yet. Rather, it’s about creating a nonprofit organization that can sustain efforts over the next century to enable interstellar travel. The Dorothy Jemison Foundation, headed by Mae Jemison, was selected earlier this year to lead the 100-Year Starship.

This week the foundation announced its plans for shooting for the stars. First on the agenda is a gathering of scientists and the public in Houston, Texas, to discuss ways to advance interstellar travel.

Jemison spoke exclusively with BBC Future to talk about how she plans to lead humanity on an interstellar journey.

Q: You have signed up for an ambitious project. Are you sure that in 100 years, we’ll be ready to launch a starship?

Let me put it this way: It should happen within the 100 years. But if we can figure out how to do it faster, in 20 to 30 years, I’m good, because that way I get to go. Why do I think the technology arc is sufficient? If you think about it, HG Wells wrote First Men in the Moon in 1901. Imagine how incredulous, fantastical that idea was in 1901. We didn’t have rockets, we didn’t have the materials, and we weren’t really flying. It was incredible. Less than 100 years later, we were on the moon. I know we will have the technological knowledge if we choose to pursue it.

Q: To get to the stars, you need to push technology forward. What do you think needs to be a priority?

We’re in the process of developing the research issues. The first one is energy. Even if you say, I’ll take a 1,000 years to get there, you still have to figure how to generate enough energy to power a vehicle for [that length of time]. You can’t do that necessarily with solar energy. If you say I want to do it in a human lifetime, then enormous amounts of energy also have to be created.

Q: Your first step towards the stars will happen in Houston this September. Can you tell us what to expect?

What we really want to do with the symposium is provide a place where folks who are deep into [interstellar travel], whether from the social sciences or plasma physics, can have technical discussions, as well as being able to engage the public writ large in advocacy, participation, and in understanding what’s going on.

Q: What comes after that?

The symposium is a very strong declaration of, “we’re here.” At the same time, we have been actually working on the overall program. What we see with the 100-Year Starship is that it’s really a multidimensional organization. By that I mean, it’s an organization that has at its core a nonprofit foundation. That nonprofit foundation is there to make sure we maintain its purpose. We have the capacity to spinoff for-profit organizations as well: companies, ventures, and partnerships based on things that come around opportunistically.

Part of the nonprofit organization is also a research institute called the The Way, aptly named because it’s going to have us figure out the way to get to the stars. It not something that assumes we’re going to do all the work. It’s an institute to push the technologies, and advocate for radical leaps forward in technology.

We are not saying our organization, is going to be the one that necessarily launches a mission to the stars in a next 100 years. We want to be the little piece that crystalizes out, the effort, the energy, and the capacity to make sure that the capabilities exist within in the next 100 years in case somebody wants to launch a mission.

Q: So, do you think it’ll a public or private organization that actually launches a starship in the next 100 years?

Some of the ideas that came out from this blank slate include how would economies change? How do you develop an economy that is not directly connected back with the United States? We have the example of people talking about asteroid mining, and bringing it back to Earth. What’s the benefit of not bringing it back to Earth? What does that economy look like? This is re-envisioning fundamental things.

Q: Part of the role the foundation will be fundraising for space travel. What will be your message to organizations or people you’re trying to raise money from.

Our proposal was titled: “An Inclusive Audacious Journey Transforms Life Here on Earth & Beyond.” That title goes to the very heart of what we’re doing. The first term is inclusive.  I think we all know that we would have a lunar base right now, 40 years after Apollo 11, if there had been a public commitment. The fact we don’t have a lunar base has nothing to do with the technology. It has to do with public commitment and societal support.

Why did we have this gung ho spirit for a while, but we were not able to sustain it? I think it’s because many people did not see themselves as beneficiaries of it. That doesn’t mean you get money directly from it. It means, could you participate, could your children participate? Not necessarily being on the vehicle, but how does it impact your world? How does it impact your imagination, your aspiration? We want to look at inclusion, not only in terms of who builds the vehicle, or who does the research, but also the gender, ethnicity, and cultural pieces. We also want to look across disciplines. Something like this requires inclusion of the behavioral sciences, economics, art, and entertainment.

Q: You mention there wasn’t support for a lunar base. How will you ensure there’s support for something as ambitious as a 100-Year Starship?

We’re inviting the public to take part. The public didn’t leave space, they were left out. Nasa and many space organizations tried to do things, such as with teachers and education, but it didn’t feel like it was a public program.

I think that people need an adrenalin rush. Folks need something aspirational, they need to do something that is hard. That’s what ignites the imagination.  I grew up during the Apollo-era, in the 1960s. When I was a little girl: I thought when I had an opportunity to go into space, I thought I would at a minimum be working on Mars, or another large planet because we were doing all of these incredible things. But we stagnated, because we didn’t continue that push. We started to get a little bit timid. Timidity does not inspire bold acts.