Loading
Matter of Life & Tech | Developing country
Soccket: the football that can produce electricity
Share using EmailShare on TwitterShare on FacebookShare on LinkedinShare on Whatsapp 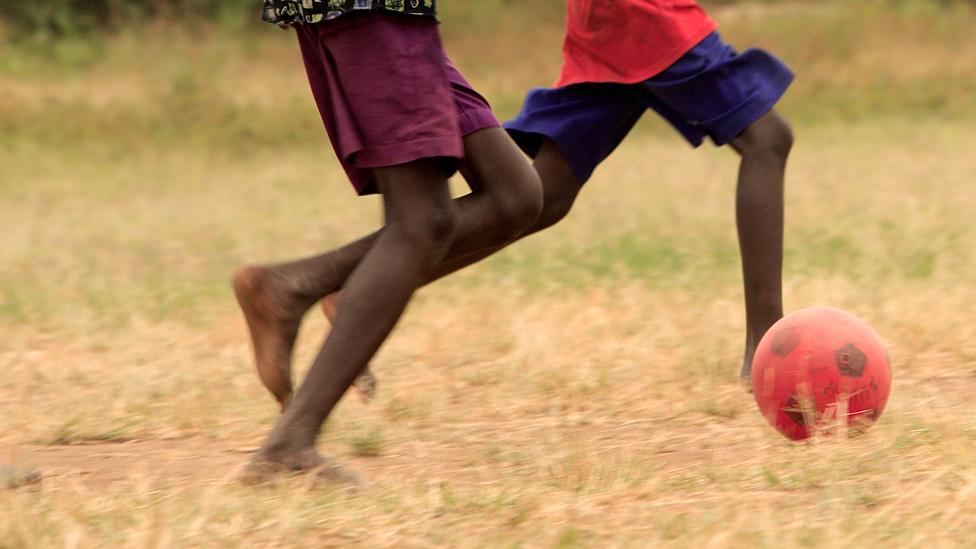 By Clark Boyd 15th June 2012
Millions in the developing world lack access to clean and safe electricity. Now, an innovative new football gives them a way to produce power with every kick.
T

The official ball for the Euro 2012 Football Championship certainly sounds impressive. After all, it’s been developed over a two-year period and tested across eight countries.

Uefa, European football’s governing body, calls the Tango 12 "a modern interpretation of the classic design, including a coloured outline inspired by the flags of the two host nations, Poland and Ukraine”.

Wow. But I'm left with a question. After kicking it around for a couple of hours, can you use it power a lamp or charge a cell phone like the Soccket?

When I first wrote about the Soccket back in the spring of 2010, I loved their pitch; a ball that during normal game play can capture and store energy, which can then later be used to provide a charge for batteries or lights.

Four Harvard undergraduates came up with the idea during a course on innovation they took together in 2008. They wanted to solve a persistent and fundamental problem – millions around the world do not have regular, reliable access to electricity.

"We lose power all the time in Nigeria," says Jessica Matthews, one of those four Harvard students. Matthews, who was born in New York but whose parents are Nigerian, says she thought about her regular visits she to her aunt's house back in Nigeria, where a diesel generator would be cranking away. "I couldn't breathe," she says, "and I couldn't believe that this was normal."

From shared experiences, the Harvard team also knew that many children in the developing world spend their evenings studying under a single streetlight, or worse, next to dangerous, expensive and eco-unfriendly kerosene lamps.

Those same kids, they noted, often spent a great deal of their daylight hours playing football (soccer if you’re an American). They asked: could there be a way to harness some of that energy, and give those kids a more reliable source of power?

The answer, it turned out, was a qualified "yes". They built a prototype inflatable ball in early 2009 which had an induction coil mechanism inside. It stored energy the same way a shake-to-charge flashlight does.

They tested the ball in South Africa in the summer of that year, and found that the energy output was good but not great. The kids, though, really took to the idea, despite the fact the Soccket didn't quite feel or play quite like a regular soccer ball because of the energy-harvesting mechanism inside.

Inspired, Matthews and her classmates decided to keep working on the idea. In 2010, to coincide with the World Cup in South Africa, they released a second prototype. This one didn't need to be inflated. It was built to be harder, and more durable. Inside, Matthews says, the induction coil was replaced by a gyroscopic mechanism. "We realized that the best motion you can capture is the rolling motion of the ball, not the bouncing motion. The ball is always rolling, whether it's on the air or on the ground." She says the new mechanism made the ball three times more energy-efficient per minute of play. Still, the ball had a bit of a wobble.

But the group managed to get the ball out to kids in various countries in Africa and Latin America through local NGOs and sports clubs. They even started a "buy one, give one" style program that allowed people in the developed world to get their own Soccket, while at the same time ensuring that another one would go to a kid in the developing world.

Perhaps most importantly, the project caught the eye of former US President Bill Clinton. It received a relatively small amount of money from the Clinton Global Initiative. And during a panel discussion in April of 2011, Jessica Matthews shared the stage with Clinton, who called it "extraordinary - kick a ball, turn on a light”. He went on to say that the Soccket "gives us a way to bring power, and improve the quality of life, and improve the learning and working capacity of poor families without building an expensive grid.”

That might be a stretch. A few thousand soccer balls, critics can argue, is hardly a replacement for a reliable electricity grid. Others will have visions of broken and unwanted Socckets littering roadsides. There are those who will question whether the "buy one, give one" approach is being driven too much by what people in the developed world think will help, and not by what people in the developing world really need or want.

Matthews would be the first to admit that these are difficult questions, but she seems prepared to meet them head-on. In May of last year, she and Julia Silverman, one of the other original creators, decided to take the project to the next level.

They founded a company called Uncharted Play, and began hiring engineers to not only improve the Soccket, but to also begin work on turning other sporting products into useful tools. For example, if you can make a soccer ball that does this, why not a basketball?

The company has greatly expanded the reach of the Soccket. According to Matthews, the ball is currently being used in South Africa and Tanzania. In Latin America, kids are kicking Socckets in Mexico, El Salvador, Honduras and Costa Rica.

Matthews recently returned from Nigeria, and says her company is "very close" to working out a deal with the government, which would see Socckets distributed to schools throughout the country. The kids, Matthews says, continue to be the "feedback gurus", continually offering up useful ideas for improving the product.

Earlier this week at TedX Rio+20 in Brazil, which fittingly has the theme Human Power, Matthews unveiled the latest Soccket design. Most of the improvements address durability and playability. It's still a few ounces heavier than a regular soccer ball, she told me, but it plays more like the real thing. It's also made from 95% recyclable parts. "If it falls apart, you can almost make a whole new ball out of it," she says.

The internal mechanism has changed again. Matthews said this one uses a design more like a pendulum than a gyroscope. "It's kind of like a self-winding watch," she says. And the energy efficiency? "We've got the ball up to where it can power anything that takes four AA batteries or less," Matthews says, adding that "and it provides a really fun way to produce that power." She says that "30 minutes of normal play with children will be able to power a one-bulb LED lamp for several hours." Charging a cell phone, she says, would require some two hours of play.

Currently, the ball delivers power through a headphone style jack. Matthews says the company's engineers are also working in a version that has a USB connection, which would allow a wider array of electronics to be connected to the ball.

Uncharted Play is also changing the business model. The company is now working with corporate sponsors such as Western Union, which has a stake in many of the places Socckets are being trialled, or might be trialled.

By the autumn, Uncharted Play hopes to have the ball available for retail sale in North America and Europe, replacing the "buy one, give one" model with something Matthews dubs "buy one, give fun”. In other words, if you spend US$60 (47 euros) on a Soccket, you won't just be giving a ball to someone else, but will also be providing funding for educational and sports programming to go with it.

Matthews even foresees the money being used to fund micro-financing efforts. The sales in the developed world, Matthews says, can give others the chance to "buy their own Soccket, instead of having it given to them, and they can have the pride and power in being able to do that.”

Currently, the Soccket is being made in the US, but Uncharted Play wants to eventually move production to local markets. Not only would that keep shipping costs down, but it would also help create local jobs.

Through it all, Matthews says, she wants the company to stay focused on quality, not price.

"You can't just give a Soccket to someone and have it fall apart in a day. I'm not a fan of designing for cheapness for the developing world just because it's the developing world. That's a misnomer. People in Nigeria, for example, place value and pride on the products they use, so it needs to be something worthwhile."

And what could be more worthwhile, the thinking goes, than using the ball you scored the winning goal with to light your room and study for tomorrow's exam?