Loading
Code Red | Weapon
US military heat-ray: Set phasers to… none
Share using EmailShare on TwitterShare on FacebookShare on Linkedin 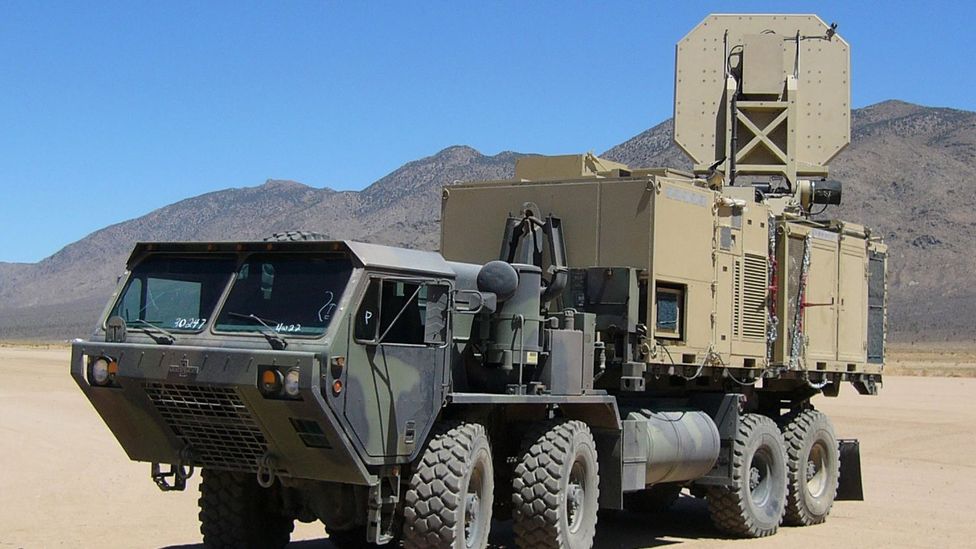 By Sharon Weinberger 18th November 2014
Despite decades of effort and tens of millions of dollars, the US has yet to field a non-lethal “pain” weapon. Here’s why.
I

It was a decision that was bound to attract its fair share of controversy. In 2010, the Los Angeles County Sheriff’s Department held a press conference to announce plans to start using a new nonlethal weapon that shoots an invisible energy beam. The weapon uses extremely short radio waves - called millimeter waves - to heat the top layer of skin, which causes an intense burning sensation.

The device, which was developed over a decade ago as part of a once-classified military project, causes searing pain, but no actual physical damage to its human targets. The police there planned to use it in one of their jails to help control inmates, particularly in case of fights.

“We were interested in that because, it’s almost like, if it worked, it would be the holy grail for police: a device that might provide pain compliance [for prisoners] without hurting them,” says Commander Robert Osborne. “Everything else that causes pain actually hurts them.”

Indeed, it seemed like the perfect weapon: unlike a Taser, which has a limited range and can only be used against one person at a time, this was more like a science fiction phaser, shooting out a beam that could strike and repel multiple people quickly and from relatively great distances.

The press conference attracted a slew of national, and even international interest, as well as a rebuke from the American Civil Liberties Union. “We strongly oppose the view that it is ever appropriate to deploy against the detainees of a county jail - or any other incarcerated population - a military weapon intended to cause intolerable pain and capable of causing severe injury or death,” the organization wrote to the sheriff, citing a case where the military version of the weapon accidentally injured people during testing.

Osborne expected the objections, but he says that he believed that the more people knew about the technology, the more supportive they would be of it. The press conference, recalls Osborne, was a way of blunting potential criticism.

“We didn’t want to begin using a device like that in any kind of a clandestine way,” he says.

In the end, it didn’t matter. Several days after the press conference, the National Institute of Justice, a US government agency that had supplied the weapon, called Osborne and asked him to hold off using it, citing questions from the Federal Communications Commission, which regulates radio frequency devices.

“Basically, it sat in the room where we did our training for close to a year,” says Osborne. Frustrated, he finally called the institute and asked them to pick up the device.

The National Institute of Justice did not respond to queries about what happened with the nonlethal weapon, other than to say it is still evaluating it. Raytheon, which builds and markets the device under the name Silent Guardian, also declined to comment on what happened.  “We've provided our customers with directed energy systems that perform safely as intended,” says David Desilets, a Raytheon spokesman.

But it isn’t just local law enforcement that has had trouble fielding this sort of nonlethal weapon; the technology that was supposed to be used in the California jail was originally developed by the military, which wanted to employ it as a weapon for crowd control, or to repel attackers on a military base. The military version, called the Active Denial System (ADS), can be put on a Humvee or a truck, and has a longer-range than the police version.

But the military weapon, despite making its public debut a decade ago, has also never been used in operations, even though the Pentagon has already spent over $55 million on developing the technology.  In 2010, the ADS was sent to Afghanistan, but it was returned to the United States without ever being used.

“It is still a novel technology,” says Marine Colonel Tracy Tafolla, the head of the Pentagon’s Joint Nonlethal Weapons Program (JNLWP), which is responsible for helping to develop the Active Denial System and other nonlethal weapons.

Col. Tafolla maintains the weapons “do not cause risk of significant injury, and are safe to employ.” Indeed, more than 7,000 volunteers have so far been zapped with the device and in March of this year, the JNLWP sponsored a demonstration of the weapon on reporters.

But Franz Gayl, the Marine Corps science and technology advisor, says the real problem with deploying nonlethal weapons has been bureaucratic politics. The current military version of the system is still too cumbersome to be used on the battlefield, according to Gayl. It takes hours to power up and is expensive to use.

Gayl, who several years ago lobbied to get the smaller version of the ADS to troops in Iraq, says the military scientists have wasted time trying come up with new-fangled versions of the weapon, rather than focusing on what the troops really need, such as a more compact version of the weapon.

The Air Force, for example, has been looking at the putting the weapon on an AC-130 aircraft, even before the ground-based system had ever been deployed.  That really had no practical applications, said Gayl in an interview last year.  “What would you do [with it]?” he said. “You shoot this beam at people and make them hop around?”

Military officials involved in developing the ADS have long acknowledged its limitations, but argue that it has still proved through testing that it could be useful in specific scenarios, such as at a checkpoint or to control crowds. The Pentagon is also working to improve the weapon, by making it cheaper and smaller. “We are investing in shrinking that technology down,” says Col. Tafolla.

Some believe it is concern about public outrage, rather the technology itself, which has stopped the military, and the police, from using these new weapons.

“I blame journalists,” says John Alexander, a retired Army colonel who once headed a nonlethal weapons program at Los Alamos National Laboratory in New Mexico. “When this thing first came out, they called it the ‘pain ray,’ and ‘human cookery,’ that is just totally not true.”

The ultimate question, however, is whether the military will ever deploy the weapon it spent so much time and money developing. In a 2010 report, Government Accountability Office, an investigative arm of the US Congress, points to a disconnect between the nonlethal weapons being developed and the needs on the battlefield.  Today, no military commander is requesting ADS for use on the battlefield, though Col. Tafolla remains optimistic. “There are needs it will fill,” he says.

Back in Los Angeles, Osborne doesn’t blame journalists. He says that those reporters who came to the press conference and saw the device reported fairly on it. He still believes that the key to getting this sort of weapon deployed is educating people about what it does—and does not—do. “The more ignorant of the facts someone was, the greater the likelihood they would respond to it in extremes,” he said.

Rather, Osborne’s frustration is with the government’s lack of resolve.  “I invested two years of my life on that project,” he said. “I never did understand why the project was halted.”