Loading
Medical Myths | Sport
Is stretching before and after exercise necessary?
Share using EmailShare on TwitterShare on FacebookShare on Linkedin 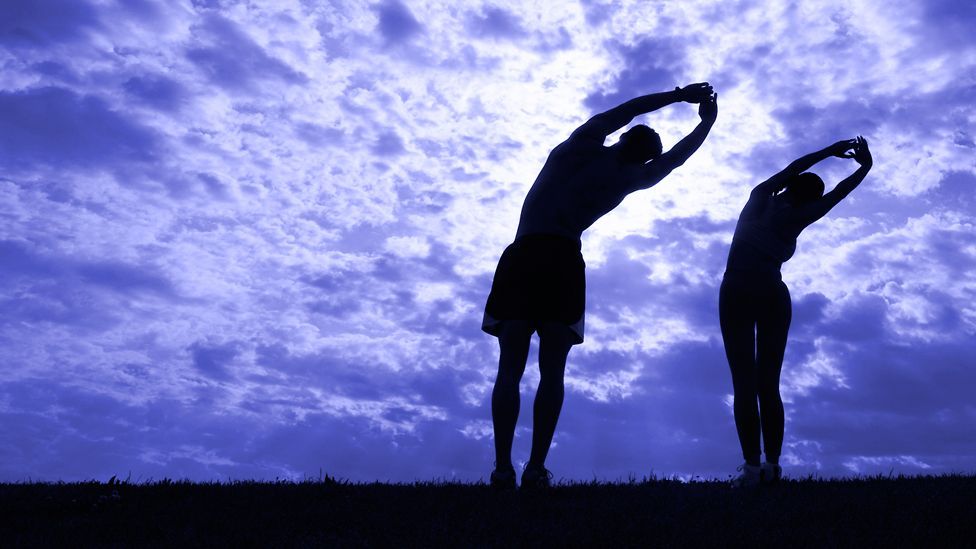 By Claudia Hammond 25th July 2012
We’re all told to limber up to prevent injury and pain. But is there any evidence that it actually works?
E

Earlier this year, I was making a programme about Olympic sprinters, and I was lucky enough to attend a training session in Jamaica where former 100 metres world record holder Asafa Powell and his teammates worked through a lengthy series of meticulous leg and abdomen stretches afterwards. An hour later they finally completed them.

If you’re going to push your body to the limits of what’s humanly possible and run 100m in less than ten seconds I can see why you need you make sure your muscles are well and truly warmed up and cooled down. But these are elite athletes – the world’s best. What if you’re not quite that good and are just going for a leisurely run?

We are often told that stretching muscles is the best way to avoid aching limbs the following day, or to minimise the risk of injury. I’m sure you feel better after stretching your calves or thighs. The problem is that no one seems to agree on the optimum time to do them. In Australia there is an emphasis on stretching before you start exercising. In Norway it’s afterwards. Some people swear by doing both. But what is the evidence that it really makes a difference whether you do it all?

There are two separate issues here. First is soreness, and by that I mean the kind of tenderness that creeps into your muscles a day or two after you’ve exercised. The kind that painfully reminds you of your previous exertions every time you move (followed rapidly by a vow never to do them again).

This is especially likely to happen if you’ve done an activity you’ve not done for a while, such as riding a bike for the first time in months because the weather has finally picked up. This type of delayed discomfort reaches its peak after two days, but the idea that stretching will prevent it stems from outdated theories as to its cause. It used to be thought that exercising for the first time after weeks or months caused the muscles to spasm, reducing the flow of the blood to the muscles, and resulting in pain. The theory went that stretching the muscles would reduce the spasm and restore the blood flow.

But more recently physiologists have established that this isn’t the cause of this form of muscle soreness. Some now believe that the pain results from elongation of sarcomeres, the parts of the muscle that help them to contract. They contain thick and thin filaments, which slide past each other; in principle stretching could still help the filaments to slide smoothly, but the evidence is surprisingly limited.

There are only a small number of randomised controlled studies on stretching and exercise. A recent Cochrane Review found just twelve, and all but one had fewer than 30 participants. For the most part these studies found stretching had little impact on soreness. By far the largest study, carried out in Australia and Norway, with more than two thousand participants, found there was a small reduction in soreness in those in the stretching group. Even then this effect was very small – 24% of the stretchers were bothered by soreness the following week compared with 32% of people who didn’t stretch.

If stretches make no difference, or at best a small difference to soreness, how about injury? I’d always assumed the idea was that if you gently loosened your muscles by stretching, then you wouldn’t suddenly pull a hamstring when you ran for a bus or leapt a puddle. Just six randomised controlled trials have been conducted on the prevention of injuries, some with the general public, others with members of the armed forces undergoing training. Overall there was no difference in the number of leg injuries sustained in those who did or did not stretch.

So what are we to make of these results that conclude stretching has little or no impact, when it’s something we are all encouraged to do? I turned to the author of one of those reviews, Rob Herbert, from the George Institute in Australia, to get his advice. He gave me an answer which, as someone who can’t be bothered to stretch before I go running, I have to confess I like.

He said if you enjoy stretching then it’s fine to carry on and it will do you no harm, but that taking all the evidence into account, it probably won’t help much. I was glad to see he puts his evidence-base results into practice in his own life. When I interviewed him from a studio in Sydney he had just come from playing football. Had he stretched beforehand? No.

Will We Ever?
1Will we ever… run 100m in 9 secs?
2Inactivity threat to health
Around the BBC