The tale of one man's strange journey to build a vehicle that can outrun the wind.

Rick Cavallaro must have thick skin. For more than four years he has been bombarded by naysayers who have ridiculed him and his work.

It all started when the software and hardware developer proposed a design for an unlikely-sounding, wind-powered car that he said would be able to travel faster than the wind blowing directly behind it.

Despite others having proposed similar ideas, skeptics immediately labeled it a hoax, putting it in the same category as perpetual motion machines. It defied physics, they said, and claimed Cavallaro was a charlatan.  Searching through comments on any article that dared mention the design and you will find post after post that is openly hostile. Even respected bloggers and magazines waded in with some branding him a “bozo”.

“They have this problem that their intuition tells them that it’s not possible, because once there’s no wind over the vehicle [when it is travelling at wind speed] it can’t harness any energy from the wind” says Cavallaro. The vehemence of the response was a shock to him.

“The thing that was most surprising to me was how much even professional engineers and scientists will not only rely on their intuition, but accept their intuition over a straightforward rigorous analysis, and real world proof.”

But, Cavallaro remained undeterred, and with the backing of large firms – including Google – he built his machine. The result is Blackbird – a ground-hugging, three-wheeled racing car with what essentially looks like a 5m- (14ft-) high wind turbine stuck on the back.  Over the last two years he has refined the design and in a series of tests has shown that it can not only run downwind faster than the wind, but it can run upwind too.

“The reason I think that most people find it counter-intuitive is that you get to a point going downwind, when you are going at exactly the same speed as the wind” says Cavallaro. To go faster, the machine would have to somehow pull ahead of the wind that’s pushing it. And, as most sailors know, that’s not possible... at least in a boat.

But by using a propeller instead of a conventional sail, Blackbird is able to overcome this limit.  “We didn’t invent or discover any new physics, we just have a clever way of exploiting some basic physics,” he says.

Although the whole thing sounds counterintuitive, the set-up is relatively simple.

So getting going in the first place might seem like a chicken and egg problem. Which comes first, the wheels turning or the prop turning? Cavallaro says that is not an issue.  He has some control over the pitch of the blades, and by flattening them at the start, the car gets the push that it needs.

This can lead to slightly surreal images. As the car begins to accelerate, streamers attached to the vehicle blow over the cockpit with the direction of the wind. As the car approaches the same speed as the gusts, the streamers momentarily drop before suddenly popping out in the opposite direction – trailing behind the car.

The really clever engineering is required to maintain stability. To make sure the torque generated by the turbine does not overturn the car, one of the axles is longer than the other one, balancing the force. In addition Cavallaro put some safeguards in place to make sure only direct wind-power was being used.

“We put ratchets in the system to ensure that we can’t make use of stored energy.  I can’t spool the prop up, and then go race with that stored energy,” he says.

Cavallaro first took on his detractors outside of the bulletin boards using this setup in 2010. At New Jerusalem airport in California he travelled downwind at a speed of 2.86 times greater than the wind, proving his concept worked.

But not content with this feat, Cavallaro has also recently shown that Blackbird can also run against the wind. To do this, he reverses the whole set-up.

“All I did to convert it is remove the propeller and replace the blades with turbine blades” he explains. “A turbine blade is turned by the wind, whereas a propeller is just the opposite.”

When the wind turns the turbine it cranks the chain, which in turn moves the wheels.   Release the brake and the car begins to pick up speed.  The only other difference to the downwind set-up is that the asymmetrical axle is flipped the other way around top provide the right stability.

The most recent tests were done in June this year, when Cavallaro and his team once again descended on New Jerusalem airport. There, they drove the machine into an oncoming wind at a speed two times faster than the windspeed, setting a new record. The North American Land Sailing Association, who confirmed the records, also clocked the craft moving at 22.9 mph (36km/h).

The demonstrations have not silenced everyone, but he seen many people finally accept his idea. One of those includes Richard Jenkins, the designer of Greenbird,  a wind-powered vehicle that broke the land speed record for the fastest wind-powered vehicle in 2009.  Unlike, Cavallaro’s vehicle, Greenbird works more like an ordinary sailing boat, running at an angle across the wind to outpace it.

Initially a skeptic, Jenkins was swayed after going to see Blackbird in action. “It works. It starts from rest, trundles to true wind speed, then powers to a multiple of about three times the true wind speed,” he wrote.

“To all fellow skeptics, start baking that humble pie, or eat your hat. Your choice.” 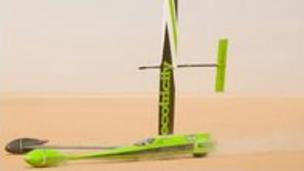