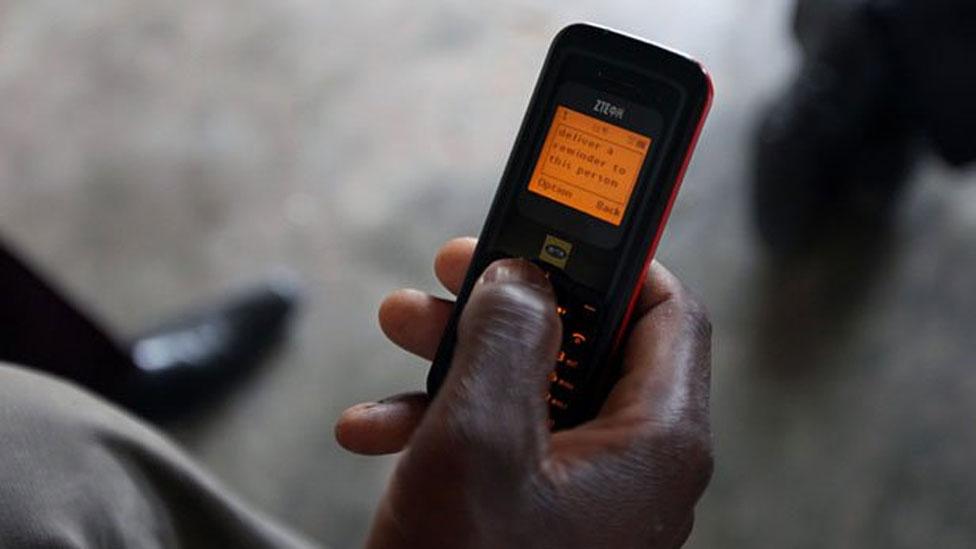 By Clark Boyd 18th November 2014
Mobile phones and simple text messages are being used to tackle everything from food shortages to childhood HIV across Africa.
T

Think of what text messages are used for and your mind might turn to organising nights out, letting someone know you will be late or perhaps taunting your friend that their team has lost a game. But in Malawi, these 140 character messages are also used for something far more compelling: saving lives.

The landlocked east African country, famous for its freshwater lake and tobacco also has another claim to fame - it has one of the highest HIV/Aids rates in the world. The statistics are sobering. More than 11% of Malawi's adults are living with HIV and around 120,000 children are thought to have the disease.

Annually, the United Nations estimates that 25% of new infections in the country are caused by mother-to-child transmission of the virus. That means it's absolutely critical that infants in Malawi get tested for HIV as soon as possible in the weeks following birth, and if they test positive, that treatment begin immediately.

But there are severe breakdowns in the system, says Dr Aye Aye Mon, HIV/Aids chief for the United Nations agency Unicef Malawi. "Less than 25% of children eligible for treatment are receiving it," she says. "Clearly, there is a critical need to scale-up paediatric HIV care and treatment in Malawi."

Dr Mon says there are many problems. There are limited lab facilities in Malawi, and what Dr Mon calls "an unreliable courier system" for delivering the results from the central labs back to health facilities. Results, she tells me, are sometimes lost completely.

Health care workers in rural health centers, she says, often have to wait up to eight months to receive the results of the test. It can then take even longer for those results to reach patients, who live on average about 15km (10 miles) away from the health centres.

"These factors," says Dr Mon, "lead to HIV positive babies being started late on antiretroviral treatment or even dying before treatment has begun."

Dr Mon and the agency decided the situation was unacceptable, and started looking for ways to speed up the time it takes to get test results, reliably, from lab to patients. They found the answer in the palm of their hands. Well, more specifically in the mobile phones that so many people were holding.

Unicef has its own Innovation Unit, responsible for using new technologies to solve big problems. One of the tools it has developed is an open source system called RapidSMS, which harnesses the power of text messaging for data collection and group communication.

"Unicef country officers were looking at how they could get better data in real time," says the agency’s innovation officer Erica Kochi. So, she says that four years ago the unit started by thinking about ways that smart phones and tablets might be used to help with that. But that proved too expensive, and too dependent on data networks that just weren't there yet.

"So we started looking at SMS as a way of transmitting information, and we realized we could do a lot."

Kochi says they did look at some of the tools that were already available, like a similar platform called FrontlineSMS. But ultimately, Kochi says, Unicef decided to build their own because of the organization's desire to track many kinds of data, and to manage higher loads of messages.

They didn't have to wait long for their first test case. At the time Unicef's Innovation Unit was dreaming up RapidSMS, country officers in Ethiopia said they needed help urgently with their food distribution. The entire Sahel region was experiencing drought, and severe food shortages. "We didn't know how much food there was at a given location at a given point in time," says Kochi. "People were filling out paper forms, but those wouldn't get to the supply people in the capital in time. Some places would have too much food, and other places would go without for weeks."

And so the Innovation Unit started working on a simple group SMS messaging system that could tie into the internet and a server. Instead of relying on paper forms, field workers could use text messages and a database to track food supplies. "It took us three to four weeks to build and deploy," Kochi says.

Soon, Kochi says, other country officers were coming and asking to try RapidSMS for various projects. If it could track food stocks, the thinking went, why couldn't it be used to track, say, children's nutrition?

The platform has come a long way in a short time. From the very beginning, Kochi says, she wanted it to be open source, so that anyone could use it, modify it, and then share those modifications more broadly. "We want it to be able to travel, to scale," Kochi says. "We've been able to use things others have developed, and vice versa." Kochi notes that people outside the humanitarian sector are using RapidSMS – for example, there's an entrepreneur in Ghana who uses it to track sales of cookstoves.

Back in Malawi, Dr Mon decided to see if RapidSMS could improve the diagnosis and treatment of children with HIV. She wanted especially to tackle that time lag between lab test and delivering test results to patients. She started a couple of years ago, and dubbed it Project Mwana, after the swahili word for "baby" or "child."

The results, she says, have been promising. Instead of relying on human couriers to deliver test results, simple text messages can be sent to health care workers. Through a series of codes, the results of the HIV test, along with any instructions for treatment, can be sent out quickly. As Dr Mon says: "The delivery speed of lab results was increased significantly, and the number of results lost was also reduced by up to 20 %."

In addition, notes Dr Mon, health care workers in rural centres can use the RapidSMS system to relay the results of ongoing treatments of infants, and their mothers, back to public health officials in the capital. Because the platform stores all the text messages, important health data is kept and can be analysed.

"Every transaction is captured," says Unicef's Erica Kochi. "So it produces data that's useful for management and decision making at a higher level."

Earlier this year, Project Mwana was adopted at the national level in Malawi and RapidSMS has  been rolled out to tackle other problems.

"It's being used for pre-natal and post-natal care, and for immunization, growth monitoring and nutrition promotion," says Piyali Mustafi, who serves as Unicef's Nutrition Manager in Malawi.

I asked both Mustafi and Dr Mon if using a new SMS based system was difficult for health care workers. Both said that workers could be trained to use the system in just a few hours, and that "many appreciate the technology".

There are, as you might imagine, network issues. Dr Mon says that in some places, coverage is spotty and messages take a while to send and receive. Unicef says its working with mobile providers in Malawi to solve some of these issues.

But even a short delay in delivering a critical - and potentially life-saving - diagnosis via text is far preferable to the consequences of never getting those results at all.