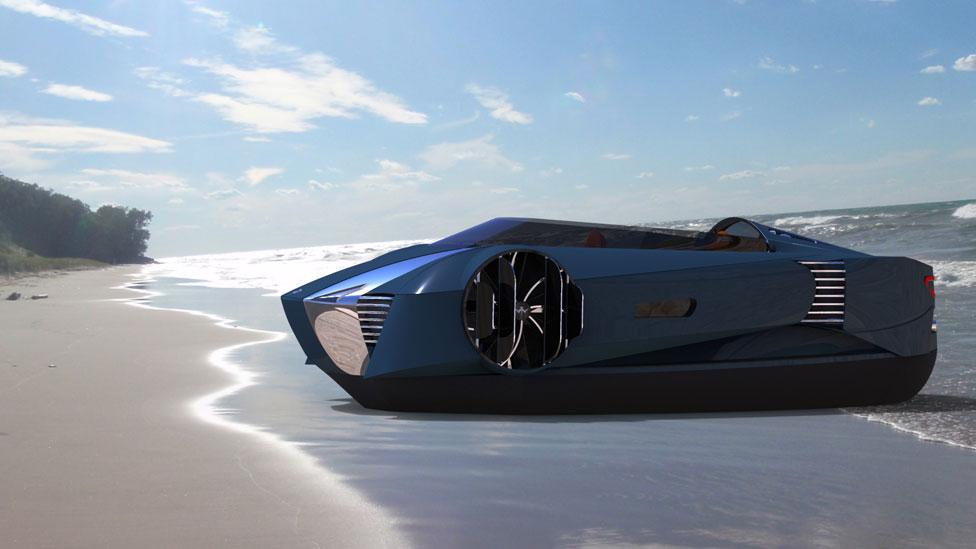 By Jon Stewart 18th November 2014
How one inventor is trying to breathe new life into floating vehicles with designs that take their cues more from concept cars.
E

Sir Christopher Cockerell’s 1950’s experiments using this set up would eventually give rise to the SR.N1, a flying-saucer like vehicle that proved its worth by crossing the channel between France and England. It would be followed by the SR.N4 which could carry more than 250 passengers and 30 cars, introducing a new era of air-cushioned travel.

Fast forward to today and, on paper, the hovercraft still seem like the perfect vehicle for a lot of situations. They are relatively fast. They can glide over land and water.  And they rely on well understood technology.

But, unlike other types of transport, they have never caught on in a big way. The military, coast guards and specialists like the off-shore oil industry use them, but attempts to bring them to the masses have failed to take off. Passenger services in everywhere from the UK to Japan have gradually shut down over the years, leaving few in operation. Today, with the exception of a few small firms building recreational hovercraft, it appears that these levitating vehicles are on the cusp of becoming a 20th century relic.

Now though inventors are trying to breathe new life into the technology by proposing radical designs that aim to bring the hovercraft flying into the 21st century. Late last year, industrial designer Yuhan Zhang proposed a radical concept for a Volkswagen hovercraft called aqua. And now, following in her footsteps is another vehicle that takes its design cues from the automotive industry, with sleek lines, high gloss paint jobs, and futuristic LED lighting.

“I’ve had a fascination with hovercraft for 12 plus years, building, designing them, working on them” says its designer, Michael Mercier, CEO and co-founder of Mercier-Jones. “But hovercraft have been stuck, in design terms. There haven’t been any exciting developments. I think there is a huge potential for a vehicle that can go on water, and land, as well as ice and snow, as an all seasons recreation vehicle.

He has proposed and designed a small, sleek two-seater machine that people could use as recreational vehicles, in the same way they might have a boat or motorbike. The design is futuristic, taking cues from sports cars rather than tin cans.

Certainly his renderings captured a lot of attention online after he appealed for $50,000 to fund the project on the crowd-funding website Indiegogo. In the end, he barely reached 10% of  that goal, proof that crowd-funding does not work for every project, despite the recent rash of enthusiastic coverage of more successful projects.

But the lack of public money has not deterred Mercier.  He says the positive reaction to their designs means that they will go ahead and is now looking for funding from backers and investors.

All hovercraft are supported by a cushion of pressurized air that has been forced under the craft by a fan and contained by a “skirt”. This in turn is driven by an engine. On larger vehicles, a separate engine – or engines - drives other fans that create thrust for the vehicle. Smaller craft tend to be powered by just one engine, with a ducting system to drive air underneath the vehicle and out of the back.

The Mercier-Jones design, which still needs a skirt, will use just one engine. But instead of being directly linked to fans, it will be used as a generator to power separate computer-controlled electric motors for both the lift and thrust systems. This should make it lighter and much quieter than existing craft, whilst still allowing it enough power for high-speed maneuvers. It should also make it greener, as the engine can run at a fixed speed while generating, for maximum efficiency.

A patent-pending control system will also make the vehicle more like a car to drive than existing craft, with simple forward, backwards, and sideways controls.

“We have incorporated two side-thrust ports at the front end of the hovercraft,” says Mercier. “The thrust coming out of those ports is vectored by control surfaces, or vanes, so using simple mechanisms you can pivot those vanes and basically steer the hovercraft like you would with two front wheels.”

Each thruster can also be controlled independently, so you can point one forward and one backwards to make a very sharp turn.

“You go beyond what a car can do, because you have more freedom of motion,” he says. That should make the vehicle much easier to control than existing hovercraft, which can be difficult to maneuver. Braking in current craft, for example, involves doing a 180 degree turn and going full thrust backwards. Mercier’s craft will be able to direct thrust from both forward ports to brake, although it still will not exactly stop on a dime.

He envisages that the body of the vehicle will be built using existing marine and aerospace materials, such as plywood for the core and composites for the body panels. Construction will be similar to a boat, which gives inherent safety over water. The propulsion systems will be held in aluminum framing.

The company hopes it can produce all of this for $20,000. But there is still a long way to go. Although Mercier says he already has running prototypes of the mechanical systems, the sleek high-end bodies that have caused so much excitement are so far just concept designs on a computer. And of course, there is the issue of funding.

“I think this vehicle can really make a go at the mass market, and become a household name, rather than just an image we think of when we see a science fiction movie,” he says.

What do you think? Are hovercrafts going to make a return? If you would like to comment on this article or anything else you have seen on Future, head over to our Facebook page or message us on Twitter.