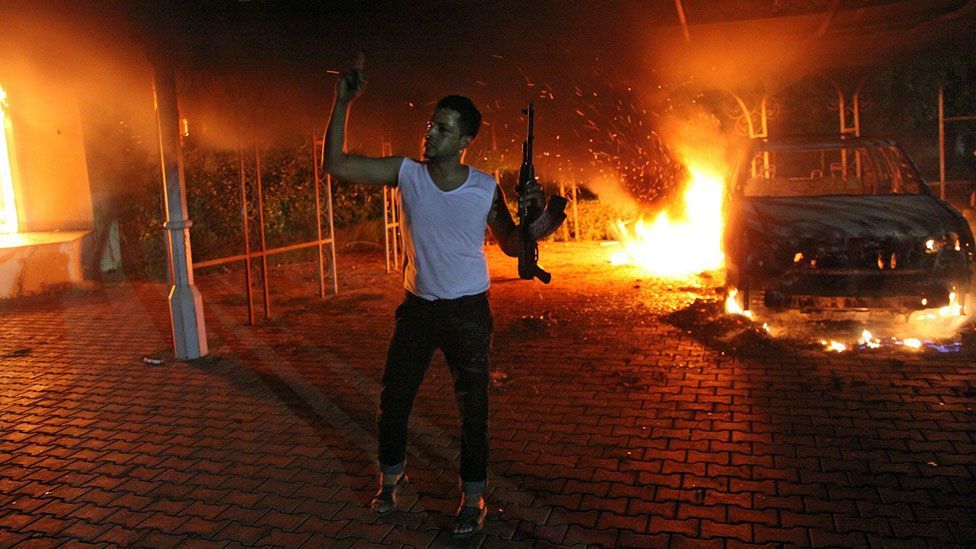 By Sharon Weinberger 18th November 2014
Can science help understand what leads people to commit violent acts... and find ways to stop them?
W

When a crowd attacked the US consulate in Benghazi, Libya, killing several people including the US ambassador, it was initially seen by some as part of a rising tide of religiously-motivated violence. Others now suggest it was part of a planned attack by a militant jihadist group.

While US investigators try to pinpoint exactly what happened, a small group of researchers will be watching closely. They are part of a growing scientific discipline that is trying to identify the neurological and biological mechanisms that lead people to commit such acts with the ultimate goal of finding ways to stop them happening at all. It is a fast growing field that has also attracted the interest of the US national security community, which wants to understand what motivates people to join insurgencies and terrorist groups.

For Pete Hatemi, searching for answers to these questions has led him to study groups as diverse as Buddhist monks and Palestinian militants. He spends much of his time collecting genetic samples from people involved in political violence. “It’s a difficult study to do because you have to find places that were recently engaged in mass political violence, so Gaza, West Bank, Syria, Egypt, and Northern Ireland,” said the Pennsylvania State University professor in an interview before the Libya attacks.

One popular area of research, which Hatemi is involved in, is looking at the so-called “warrior gene”, also called MAO-A. This gene, present in almost everyone, produces an enzyme of the same name that regulates various neurotransmitters in the brain, such as serotonin.  However, people with the warrior variant produce smaller amounts of the regulatory enzyme leading to increased levels of serotonin.  The warrior gene got its name because of studies in mice which showed a correlation with aggressive behavior.  Some human studies have also suggested a correlation, but it remains an area that is hotly disputed.

Hatemi is careful to point out that genetics, like environment, is merely one facet of aggression. “Just because you grew up in an inner-city doesn’t mean you’re going to be violent or a gang member,” he says. “Same thing with genotypes, just because you have a specific genotype just means that there’s an interaction between the [genotype and the environment] that makes it more likely that you’ll respond to violence with violence.”

In fact, Hatemi’s findings often defy expectations: he’s looked at competitors in the Ultimate Fighting Championship, a mixed martial arts sport, and found that none of them had the warrior gene, yet the vast majority of Buddhist monks he genotyped did have the warrior gene. “Clearly [the monks] chose an environment that would then repress any possible interaction with any kind of liability for increased violence, which we thought was fascinating,” he says.

While Hatemi is traveling the globe looking at the effects of real-world violence, Rene Weber is taking a different approach. The professor of communications at the University of California, Santa Barbara, uses video games to simulate violence in the lab. His game of choice is Carmageddon, which is based loosely on the cult movie Death Race 2000, where drivers in a post-apocalyptic America race across the country running down pedestrians along the way. Similarly, in Carmageddon, people scream, blood flies, and particularly gory impacts get a “splatter bonus.”

But, he says, this virtual blood sport may hold a key to understanding the brain’s response to violence, something that has been notoriously difficult to test in the lab. It’s hard, after all, to subject people to simulated violence while taking a brain scan, which requires subjects to remain nearly immobile inside an unwieldy machine creating a magnetic field.

Weber, himself an avid gamer, initially thought the idea of using video games to test people’s reaction to violence was crazy, but then he and his colleagues eventually jury-rigged a way to do it: they placed a screen at the back of the functional MRI scanner, which the subject views through a mirror image reflected in the front, while using a joystick to control their avatar. As the subject hunts for innocent victims to kill off, researchers measure activation of the neural pathways.

“We have a condition with full violence: They drive and run over little animals and pets,” Weber says. “They kill. It’s just terrible.”

Six years ago, Weber and his colleagues demonstrated that violent video games activated the same neural pathways as real violence. What they’re after now is looking at whether these same responses, particularly in those with the warrior gene, can be altered by chemicals, like Quetiapine, an anti-psychotic drug that lowers aggressive tendencies.

In a recent experiment, Weber and his collaborators tested two groups of people playing Carmageddon, and a non-violent control version simulating non-aggressive behavior. In the tests, one group received Quetiapine three successive days prior to the brain imaging experiment, and the other a placebo. The results, he says, demonstrated that Quetiapine did indeed alter the neural pathways responsible for violence, suggesting the drug could modulate a particularly aggressive response to violence. The next step, he says, will be to repeat the study and correlate it with people who have the warrior gene.

Of course, Weber is quick to caution that it’s still early days for this research, and no one is suggesting that violence, let alone political violence, be combatted with drugs.

That’s not to say there aren’t any applications for this work: Hatemi says his ultimate goal is develop methods to combat violence. “We’re looking to find ways to better identify and possibly intervene in situations to reduce the level of political violence,” he says.

But when it comes to situations like that in Libya, Egypt and Yemen, it may already be too late. The idea is to identify people in childhood with a genetic propensity to violence, and change their environment at that point, according to Hatemi.

“Intervention is not going to come in when somebody is a fully grown adult,” Hatemi says. “I think at that stage intervention is possible, but very difficult.”

Which raises the question of why national security agencies are interested in understanding the neurological or biological causes of violence at all. For Weber and his video games, the applications are still unclear.

“I think it’s valuable for the Pentagon and other militaries to look at that and respond to developments in cognitive science,” says Weber, “but to make any concrete operational recommendations, that would be a long shot.”

21 September 2012: This article was updated to clarify that the interview with Peter Hatemi was conducted before the attack in Benghazi.