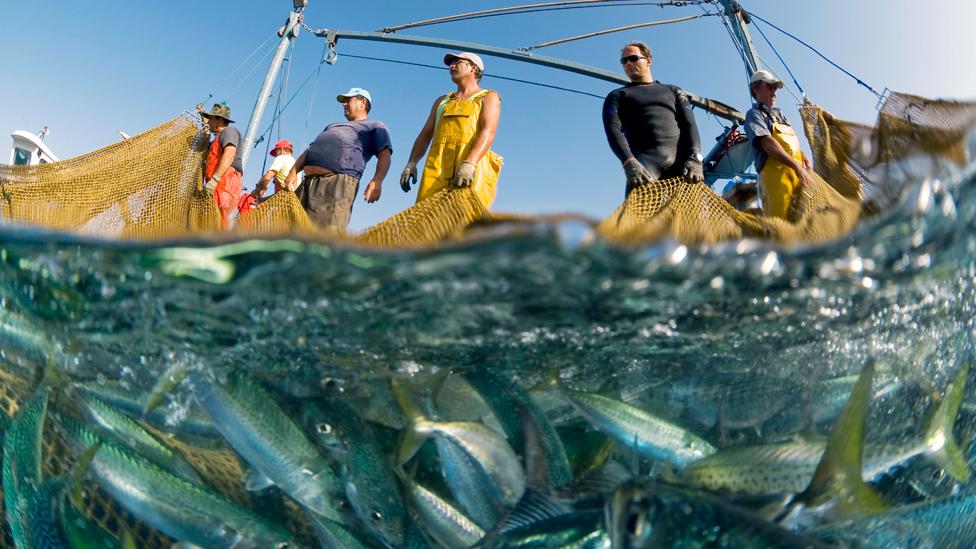 By Gaia Vince 21st September 2012
Global fish stocks are exploited or depleted to such an extent that without urgent measures we may be the last generation to catch food from the oceans.
I

It has been some time since most humans lived as hunter-gatherers – with one important exception. Fish are the last wild animal that we hunt in large numbers. And yet, we may be the last generation to do so.

Entire species of marine life will never be seen in the Anthropocene (the Age of Man), let alone tasted, if we do not curb our insatiable voracity for fish. Last year, global fish consumption hit a record high of 17 kg (37 pounds) per person per year, even though global fish stocks have continued to decline. On average, people eat four times as much fish now than they did in 1950.

Around 85% of global fish stocks are over-exploited, depleted, fully exploited or in recovery from exploitation. Only this week, a report suggested there may be fewer than 100 cod over the age of 13 years in the North Sea between the United Kingdom and Scandinavia. The figure is still under dispute, but it’s a worrying sign that we could be losing fish old enough to create offspring that replenish populations.

Large areas of seabed in the Mediterranean and North Sea now resemble a desert – the seas have been expunged of fish using increasingly efficient methods such as bottom trawling. And now, these heavily subsidised industrial fleets are cleaning up tropical oceans too. One-quarter of the EU catch is now made outside European waters, much of it in previously rich West African seas, where each trawler can scoop up hundreds of thousands of kilos of fish in a day. All West African fisheries are now over-exploited, coastal fisheries have declined 50% in the past 30 years, according to the UN Food and Agriculture Organisation.

Catches in the tropics are expected to decline a further 40% by 2050, and yet some 400 million people in Africa and Southeast Asia rely on fish caught (mainly through artisanal fishing) to provide their protein and minerals. With climate change expected to impact agricultural production, people are going to rely more than ever on fish for their nutritional needs.

The policy of subsidising vast fishing fleets to catch ever-diminishing stocks is unsustainable. In Spain, for example, one in three fish landed is paid for by subsidy. Governments, concerned with keeping jobs alive in the fishing industry in the short-term, are essentially paying people to extinguish their own long-term job prospects – not to mention the effect on the next generation of fishermen. Artisanal fishing catches half the world’s fish, yet it provides 90% of the sector’s jobs.

Clearly, industrialised countries are not about to return to traditional methods. However, the disastrous management of the industry needs to be reformed if we are to restore fisheries to a sustainable level. In the EU alone, restoring stocks would result in greater catches of an estimated 3.5 million tonnes, worth £2.7 billion a year.

Rather than having a system in which the EU members each hustle for the biggest quotas – which are already set far beyond what is sustainable – fisheries experts suggest individual governments should set quotas based on stock levels in their surrounding waters. Fishermen should be given responsibility over the fish they hunt – they have a vested interest in seeing stocks improve, after all – and this could be in the form of individual tradable catch shares of the quotas. Such policies end the tragedy of the commons situation whereby everyone grabs as much as they can from the oceans before their rival nets the last fish, and it’s been used successfully in countries from Iceland to New Zealand to the US. Research shows that managing fisheries in this way means they are twice as likely to avoid collapse as open-access fisheries.

In severely depleted zones, the only way to restore stocks is by introducing protected reserves where all fishing is banned. In other areas, quota compliance needs to be properly monitored – fishing vessels could be licensed and fitted with tracking devices to ensure they don’t stray into illegal areas, spot-checks on fish could be carried out to ensure size and species, and fish could even be tagged, so that the authorities and consumers can ensure its sustainable source.

The other option is to take humanity's usual method of dealing with food shortages, and move from hunter-gathering to farming.

Already, more than half of the fish we eat comes from farms – in China, it’s as high as 80% – but doing this on an industrial scale has its problems. Farms are stocked with wild fish, which must then be fed – larger fish like salmon and tuna eat as much as 20 times their weight in smaller fish like anchovies and herring. This has led to overfishing of these smaller fish, but if farmed fish are fed a vegetarian diet, they lack the prized omega-3 oils that make them nutritious, and they do not look or taste like the wild varieties. Scientists are working to create an artificial version of omega-3 – current synthetic omega-3 versions are derived from fish oils.

Fish farms are also highly polluting. They produce a slurry of toxic run-off – manure – which fertilises algae in the oceans, reducing the oxygen available to other species and creates dead zones. Scotland's salmon-farming industry, for example, produces the same amount of nitrogen waste as the untreated sewage of 3.2 million people – over half the country's population. As a result, there are campaigns to ban aquaculture from coastal areas.

Farmed fish are also breeding grounds for infection and parasites that kill off large proportions of fish – escapees then frequently infect wild populations. Farmers try to control infestations with antibiotics, but usually only succeed in creating a bigger problem of antibiotic resistance.

Humanity is not limiting its impacts to fish most commonly found on menus. Exotic sea creatures from turtles to manta ray to marine mammals are being hunted to extinction. Shark numbers, for example, have declined by 80% worldwide, with one-third of shark species now at risk of extinction. The top marine predator is no longer the shark, it’s us.

A decline in shark numbers has a significant impact on the marine ecosystem: it can lead to an increase in fish numbers further down the food chain, which in turn can cause a crash in the population of very small marine life, such as plankton. Without the smallest creatures, the entire system is threatened.

One of the repercussions, which I have discussed before, is an increase in jellyfish numbers, but overfishing, pollution, climate change and acidification also affect the marine ecosystem. Warmer waters are pushing species into different habitats, causing some to die off and others to adapt by creating entirely new hybrid species. Meanwhile, trawlers are netting bycatch that include marine mammals and even seabirds – as many as 320,000 seabirds are being killed annually when they get caught in fishing lines, pushing populations of albatrosses, petrels and shearwaters to the edge of extinction.

Some solutions are easier than you might think. Seabirds can be protected by using weighted lines and scaring off birds with lines that have flapping streamers attached – these methods alone have reduced seabird deaths by more than 85-99% where they are used.

Strengthening and expanding protected marine reserves would also go a long way to conserving species. Currently, less than 1% of the ocean is protected, although by 2020, the international community has agreed to raise this to 10%. Reserves, when properly patrolled and monitored, do protect marine life, and nation after nation is stepping up to the plate. The tiny Pacific islands have banded together to create a giant protected area of 1.1 million square kilometres, for example. Not to be outdone, Australia has created the world’s biggest protected area, and countries around the world from Britain to New Zealand are joining the effort.

But useful as they are, marine reserves – often around points like coral reefs or rock islands – are only effective if governments have the resources to patrol and protect them. Also, many marine creatures, from whale sharks to whales, are migratory – they don’t stay in the protected areas, making them easy prey for fishermen. What’s needed, many argue, are mobile reserves that follow migratory animals, and those that shift habitat due to currents or climate phenomena like El Nino.

The zones need to be well-targeted and needn’t impact on fishermen’s livelihoods. For example, one study found that designating just 20 sites – 4% of the world’s oceans – as conservation zones could protect 108 species (84%) of the world’s marine mammals.

The rivers in many European cities were so overfished, polluted and dammed up by the mid 20th century that they emptied of fish, and many species went locally extinct. But thanks to clean-ups, riverbank restoration and fishing restrictions, fish are returning to waterways,  even in inner cities. A decade ago, few people would have imagined that salmon would return to my local river, the Thames. If it is possible to bring back fish to 'dead' rivers, there is surely hope for the world's oceans.

Smart Planet
1How can we save coral reefs?
2Disappearing salmon in Alaska
Around the BBC