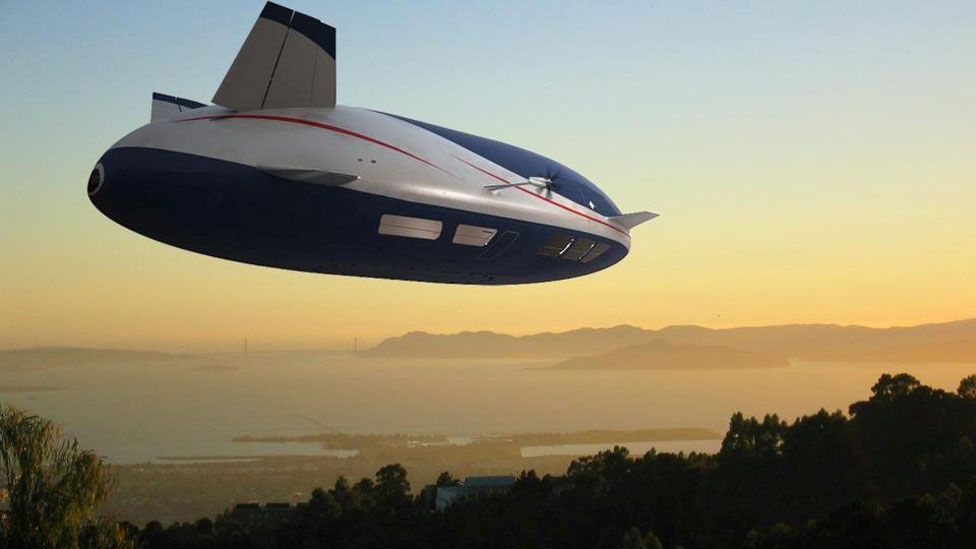 By Jon Stewart 18th November 2014
A behind the scenes look at the project to build a radical new airship that could soon criscross our skies.
S
Sorry, this video is no longer available

If you like the idea of cruising on a ship in laid-back luxury, but prefer the speed and convenience of air travel, there may soon be a solution. Drawing their inspiration from the airships of yesteryear, a new generation of airship-like vehicles could soon be making their way across our skies.

In a hangar outside Tustin in California, engineers are preparing one of the most radical designs for testing.  The Aeroscraft, as it is known, is the brainchild of Igor Pasternak and has been made possible by advances in materials and computer control systems.

“We are resurrecting [the airship] with new composite fabric structures, that are stronger, lighter, more versatile” says Fred Edworthy, of Aeros, the company building the lighter-than-air vehicle.

The airship in the hangar is being built to test various key components of a design that could one day contain a hotel, casino or spa. However, the company believes one of its biggest markets could be transporting freight from hard-to-reach locations or, for example, carrying wind turbine blades. Currently blades are as large as they can be to be transported on a truck.

“It’s a new era for logistics in cargo. Transport is our first aim for these craft,” says Edworthy.  “It’s impossible to get into some of the resource rich areas of the world. Ecologically, you can’t do it. Areas of the far north, or the Amazon are good examples.”

Planes need large runways, and helicopters can only carry limited loads. But the Aeroscraft can take-off and land vertically using turbofans that can swivel to provide lift and move the craft forward.

The whole process of loading and unloading, as well as getting off the ground and keeping the ship aloft is helped by an ingenious system held within the frame of the ship.

“The biggest advancement is our buoyancy management system that allows the vehicle to operate autonomously - without the hundreds of people that you saw grabbing the Zeppelin type airships,” says Edworthy.

The system gets around a major drawback of traditional airships which have difficulty controlling lift, and need ballasts to reach the correct altitude, and ropes and docking stations are needed on the ground to stop a vessel floating off.

Instead, the Aeroscraft uses large bags, or bladders, inside a rigid structure. When the pilot wants to descend, the vehicle needs to be heavier, so the helium in the main body of the craft is compressed and put into storage chambers. That creates a relative vacuum inside the body, which draws air from the outside. Air is heavier than helium, so the vehicle sinks. To rise again, the stored helium is released back into the body of the aircraft, pushing the air out of the bags and replacing the volume it filled with lightweight helium.

“We can control the buoyancy, and allow ourselves to come to the ground and land vertically as well as take off vertically,” says Edworthy.  That is the biggest advancement over the last 100 years.”

The whole process is controlled from a cockpit, which is also designed to be retractable to allow the craft to be as aerodynamic as possible. During flight it can be moved inside the vehicle, and the pilots will have “virtual” views on screens. The whole assembly is lowered below the airship body for landing or when visibility is needed.

The craft is also designed to be as simple to fly as possible. Fibre-optics around the aircraft link touch screens in the cockpit with actuators and controls in the engines or on the control surfaces.

“We moved from the typical aircraft paradigm where we have pedals, to a 6 degree of freedom joystick,” says Munir Jojo-Verge, aerospace control flight engineer for the firm.  “You can control the vehicle with one hand – roll, pitch, yaw. This is a huge step.”

Ease of control will be critical when the firms’ next generation craft, which are twice the size of the test vehicle under construction, are built.

Assuming they pass their flight tests, which will begin later this year, the big question is whether anyone will choose to fly in them. For all of their cutting edge design and elegance, they will still only travel at about quarter of the speed of a passenger jet.

“It will be slower than a 747 [plane] at approximately 110 knots (approx 200km/h) cruising speed,” admits Edworthy. “But it would be the event of ‘getting there’ rather than how quickly you get there.”