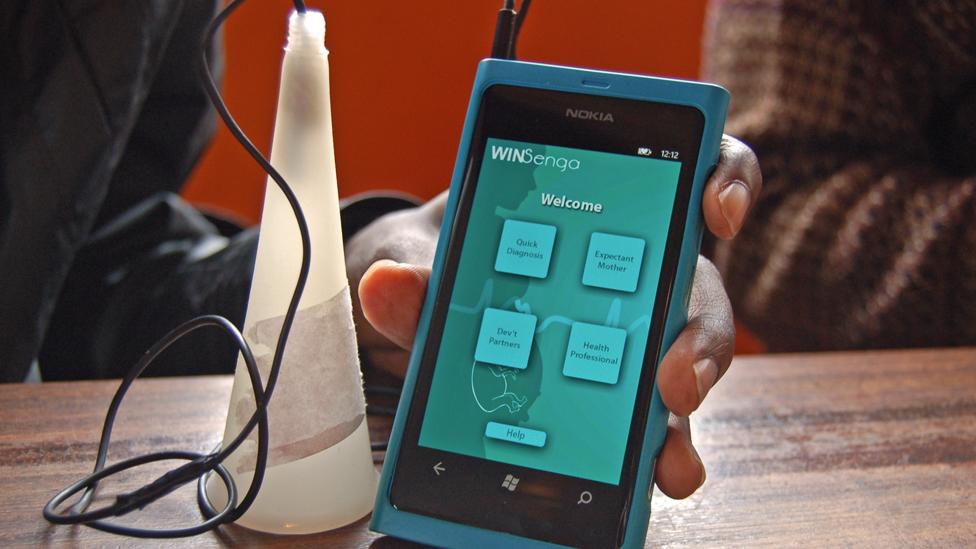 By Clark Boyd 27th September 2012
A new smartphone app aims to provide a cheaper alternative to ultrasound in Africa by bringing an old technique into the 21st century.

"We couldn't hear anything,” says Aaron Tushabe, recounting a trip with two friends to the maternity ward of the main hospital in the Ugandan capital, Kampala. The student had been handed an ear-trumpet-like device called a Pinard horn, used to listen for the vital signs of a baby in a mother’s abdomen. Despite straining to hear against the murmur of the ward, Tushabe couldn’t hear any signs.

Luckily, the problem was not with the baby, but the combination of what he calls a “rather primitive device”, and his lack of training. In fact, the Pinard horn, named after the French doctor who invented it back in the 19th Century, can be very effective in the right hands. It can determine the age, position and heart rate of the foetus, along with an indication of its overall health. But to do this consistently can take many years of practice.

Meanwhile, in developing countries, “a woman dies from complications in childbirth every minute”, according to the UN, while every year “eight million babies die before or during delivery or in the first week of life”. The key to saving those lives, the UN says, is “access to skilled care during pregnancy, childbirth and the first month after delivery”.

These kinds of statistics, along with their experience of using the Pinard horn, got the three computer science students thinking about whether they could improve the design. “We saw that technology gap and started thinking about how we might bridge it.”

In developed countries, ultrasound is the answer. But these machines – responsible for those fuzzy black and white pictures that are liberally posted on Facebook, brought out at parties, and waived at co-workers when someone becomes pregnant – are expensive. Even if a hospital could afford one, few expectant mothers can afford the $10 scan in countries where many live below the poverty line.

And so, a new project called WinSenga was born to build what Joshua Okello, one of the other students who visited the hospital, calls "an enhancement" to the Pinard horn. The new device still consists of a plastic trumpet, but with a highly sensitive microphone inside. The souped-up device, which is placed on a women's abdomen just like a regular horn, connects to a Windows-based phone running an app that, as Okello says, "plays the part of the midwife's ear." The system picks up the foetal heart rate, transmits it to the phone, and then the phone runs an analysis. The app, developed in conjunction with medics for the UN agency Unicef then recommends a course of action, if any, for the mother and her unborn child.

"When I first heard the idea, I thought it was brilliant," says Davis Musinguzi, a medic and Unicef advisor. "But being software developers, they needed guidance on the medical component of the application." The doctor says he advised on the medical parameters, procedures and standards that needed to be part of the software. He also says he tried to ensure that the new device wouldn't disrupt the normal workflow of an antenatal visit, but rather help eliminate the bottlenecks.

The value of going mobile is pretty clear, allowing carers to visit mothers wherever they are. "We envision a midwife being able to travel to rural areas on specific days, and then mothers could gather in, for example, a local church,” Tushabe says. “Then, the midwife could administer the antenatal diagnosis to all the mothers."


Okello, Tushabe and their partner Josiah Kuvuma presented their idea earlier this year at an event sponsored by Microsoft called the Imagine Cup, which aims to solve pressing problems, particularly in the developing world. The event partly inspired the name. The “Win” part comes from the software giant’s own products, Okello tells me, while "Senga" refers to the local name for the aunt who used to help village mothers-to-be with their antenatal care and their births.

The team went on to win the regional competition before losing out in the finals held at Sydney. However, the loss has not held them back. The team says they have since been approached for potential partnerships and are currently looking for funding to launch a six-month field trial of their system. If that's successful, then WinSenga could launch as a product. The team says its too early to talk about pricing, but they are heartened by the fact that the cost of smartphone handsets is rapidly dropping across Africa, making their system much more attractive to potential clients.

While they wait for funding, the WinSenga team is far from idle. Despite the fact that all three team members still have busy university schedules, they have already launched an expanded version of the software designed to assist healthcare workers and mothers during labour. The group's website also promises a version called "WinSenga Plus", which would assist with postnatal care as well. And as if that isn't enough, WinSenga say they are almost ready to launch an Android version of their application, and will then start work on a version for iOS.

The apps are all part of a new movement, says Dr Musinguzi, which is gathering momentum.

"The use of mobile technology is a relatively new intervention to improving health services," he says. WinSenga and other devices and apps that are coming on to the market, he says, will have to prove themselves to healthcare professionals by "reducing the burden of doing what they have always done."

It will take training and investment, he says, but it "will pay off in the long run”.

It is a sentiment that Okello agrees with. "Communities that have healthy mothers are generally much more productive. It's all tied in."