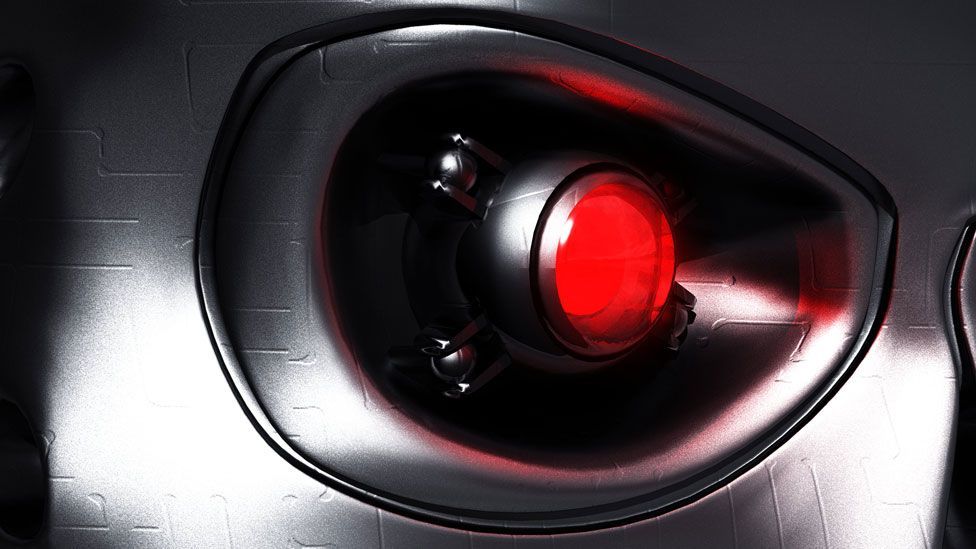 By Sharon Weinberger 18th November 2014
A number of robots in development for the military are being given increasing amounts of autonomy. The question is now how they will be used.
T

Think of advanced robotics, and it is easy to let your mind wander to the sentient beings depicted in Blade Runner, or the soulless, autonomous assassins in the Terminator franchise.

But, despite widespread press about armed drones hunting down terrorists and insurgents in Afghanistan and Pakistan and the increasing use of ground robots to fight roadside bombs, the truth is that most military robots are still pretty dumb. In fact, almost all unmanned systems involve humans in almost every aspect of their operations—it’s just that instead of sitting in a cockpit or behind the wheel of a vehicle, humans are operating the systems from a joystick or computer often at a remote base far from the action.

Now that is slowly beginning to change.

Next week, one of the Pentagon’s most commonly used robots will finally make baby steps toward greater autonomy. The PackBot, a tracked robot used by US troops to help clear bombs in Afghanistan, will get a number of upgrades that will allows it to operate autonomously in some situations, according to Tim Trainer, a vice president for product management at iRobot, which makes the pint-sized bots.

Still, the autonomous capabilities will actually be fairly limited. In cases where the PackBot loses contact with its human operator, it will retrace its steps back to where it was when it last had communications.  While seemingly simple, this small step toward autonomy is a critical improvement: in the past, if the robot lost communications while on its way to defuse a bomb, an explosive ordnance disposal technician would have go and retrieve it, potentially exposing the person to risk.

The upgrade includes other basic elements of autonomy, such as the ability to right itself if it falls over—a big problem in Afghanistan’s rough terrain—and the ability to navigate between specific waypoints, using satellite navigation and overlaid imagery, without constant communications with an operator. “Those are first steps to autonomy,” says Trainer.

The idea is to take these slow steps toward autonomous robot operations so that the military’s confidence grows, explains Trainer. Eventually, he says, the PackBot will be able to perform more complex tasks without human intervention, such as clearing an entire building of potential threats.

While these improvements are a far cry from the notion of robotic foot soldiers, it represents the reality of where military technology is today. “I don’t think you’ll see autonomy as the breakthrough leap,” says Trainer. “It’s not like we’ll have the one autonomous solution.”

Indeed, the Pentagon’s progress toward fielding autonomous robotic systems has been agonizingly slow, concluded a recently released report by the Defense Science Board, a panel of defence experts that advises senior Pentagon leaders. They placed a large part of the blame for a lack of autonomous robots on misperceptions about what autonomy means.

“Unfortunately, the word ‘autonomy’ often conjures images in the press and the minds of some military leaders of computers making independent decisions and taking uncontrolled action,” the report notes. And even though the reality is often much more prosaic—such as having a robot flip over on its own—those concerns have still served to limit the military’s willingness to embrace autonomy.

“It should be made clear,” the panel says, “that all autonomous systems are supervised by human operators at some level, and autonomous systems’ software embodies the designed limits on the actions and decisions delegated to the computer.”

Of course, statements like this do not reassure everyone. Some forward-looking robotic expert have already called for more debate about the subject of autonomy. They point towards developments such as the SGR-A1, a gun-toting sentry robot, developed five years ago by Samsung Techwin Co for the South Korean government as a way to patrol the border between North and South Korea. The fixed robot uses pattern recognition software to spot humans and a machine gun if needed. Although the robot is designed to operate with human intervention, it is its autonomous mode that has caught ethicists’ attention as a possible precursor of future developments.

While some defense officials may downplay concerns about autonomy, Jonathan Moreno, a professor of medical ethics and health policy at the University of Pennsylvania, is urging policymakers to think now about the implications of unmanned systems, which is already having profound implications. “From a geostrategic standpoint, it widens the scope of the battlefield - now it extends from the United States to Afghanistan and Pakistan,” he says. “That is really new. “

But for the majority of those working in the field, “killer robots” are not on their radar. Instead, they say, military robots are likely to be used initially for jobs that are dangerous, but not involved in actually fighting enemy forces.

Already under development, for example, is a military humanoid robot that will fight fires on ships. The innocuously named Shipboard Autonomous Firefighting Robot, or Saffir, actually looks suspiciously much like a skinless version of the Terminator, though its mission is much more peaceful.

Saffir, which is being developed by university researchers in cooperation with US navy scientists, is designed to fight fires on naval ships.  But even these firefighting robots are being developed specifically to work with human counterparts, so a major focus of the work is on getting the robots to respond to human gestures and speech.

Another robot being designed to help human soldiers is the Bear (Battlefield Extraction-Assist Robot), a humanoid robot with tracked legs. The Bear, built by Vecna Technologies, was initially funded by the US Army and designed to scoop up injured soldiers from the battlefield, transporting them to a safe area where they could receive medical assistance. The idea was that in the middle of a firefight it would be better to send in a robot to rescue a person, rather than another soldier who might get injured.

But Vecna Technologies's chief technology officer, Daniel Theobald says that the company now is focusing on other missions for its robotics work. “We quickly realized if we could build a robot that could rescue a wounded soldier, it would also be capable of a lot of other high value activities,” he says.

One of the missions the company has focused in on is logistics, or the idea of having robots move things from one place to another, or loading and unloading supplies. While not as glamorous perhaps as battlefield rescues, this sort of work is still critical to keeping human soldiers out of danger.

“A lot of time when soldiers get wounded, it’s because they are doing some other activity, and couldn’t keep their hands on their weapons,” says Theobald.

Moving supplies is also a mission envisaged for Boston Dynamic’s Big Dog, which has captured public attention for its eerily mammal-like movements.  But like other robotic efforts, Big Dog’s road to autonomy is slow - its designers would like it to be able to sense objects or barriers on its own, for example, but it would ultimately be supervised by a human.

Indeed, in Afghanistan, for example, just moving things around has become a dangerous job, because it exposes troops on the ground to roadside bombs, which continues to be the leading cause of battlefield deaths there. Put robots in the place of the humans, and, at least in theory, lives would be saved.

Theobald says that when it comes to the battlefield, the first autonomous robots are likely going to be essentially deliverymen.  “Let the soldiers do the fighting,” he says. “Moving things around, that’s something that the robots can do.” 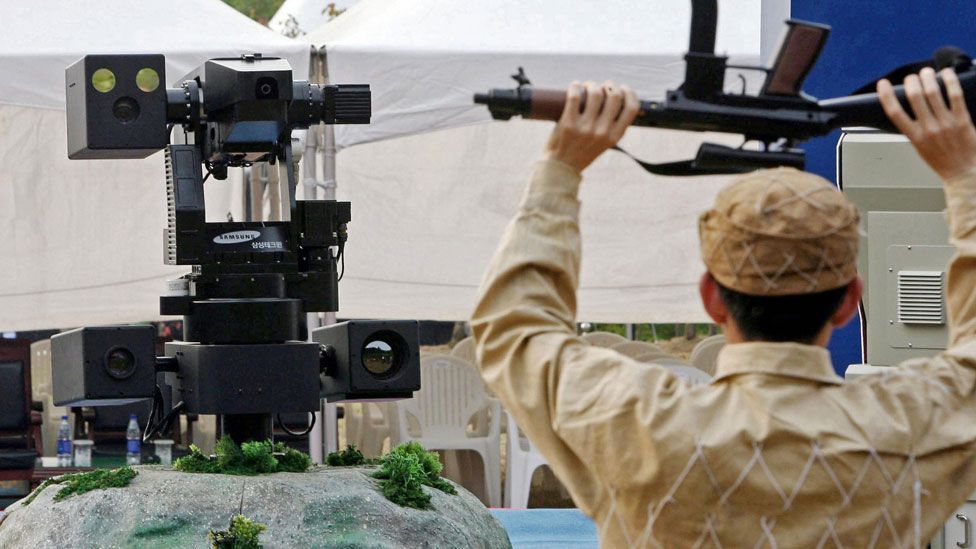 The SGR-A1, developed for the North/South Korea border, can in theory fire a gun without human intervention, raising concerns about autonomous robots. (Copyright: Getty Images)

The SGR-A1, developed for the North/South Korea border, can in theory fire a gun without human intervention, raising concerns about autonomous robots. (Copyright: Getty Images) 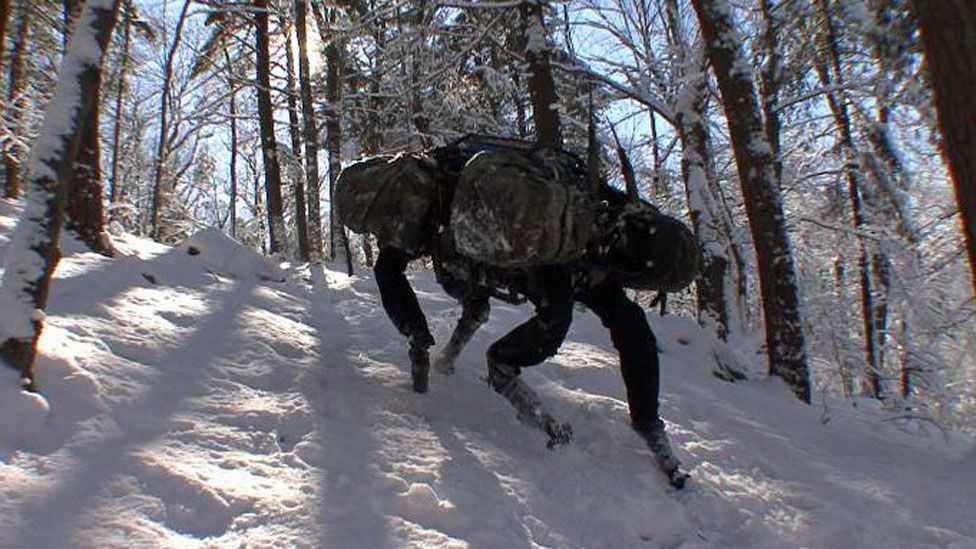 The reality is that most robots still depend on humans and most are being developed for more more mundane jobs, such as carrying supplies for troops. (Copyright: Boston Dynamics)

The reality is that most robots still depend on humans and most are being developed for more more mundane jobs, such as carrying supplies for troops. (Copyright: Boston Dynamics) 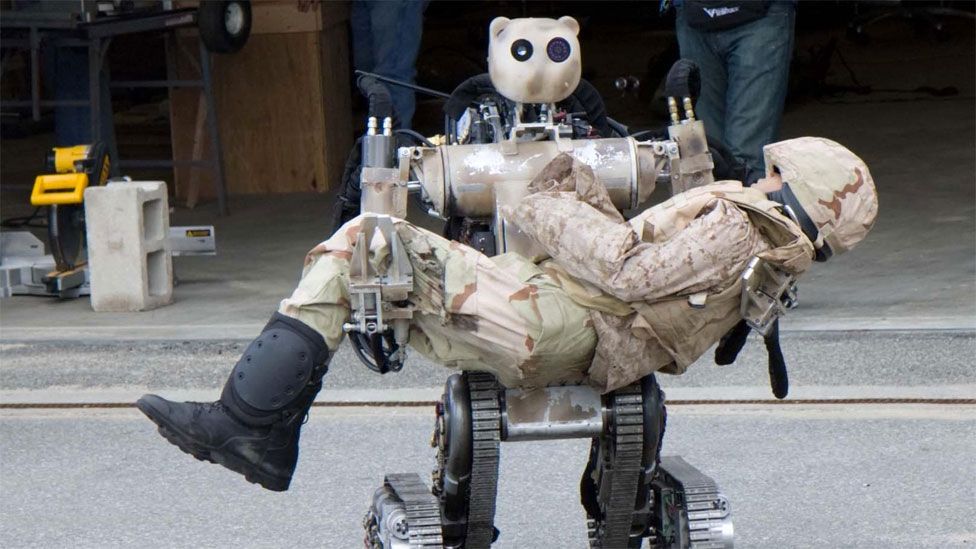 Robots like the Bear could also be used for dangerous tasks such as retrieving injured soldiers from the battlefield and transporting them to safety. (Copyright: US Army)

Robots like the Bear could also be used for dangerous tasks such as retrieving injured soldiers from the battlefield and transporting them to safety. (Copyright: US Army) 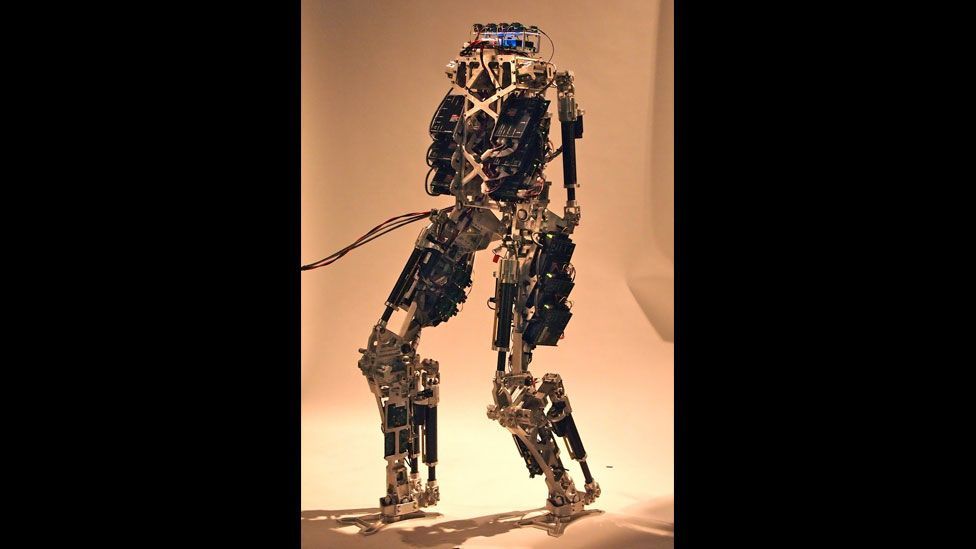 Others, such as the advanced humanoid robot Saffir, have been built as a possible way to tackle fires onboard ships run by the US Navy. (Copyright: RoMeLa)

Others, such as the advanced humanoid robot Saffir, have been built as a possible way to tackle fires onboard ships run by the US Navy. (Copyright: RoMeLa) 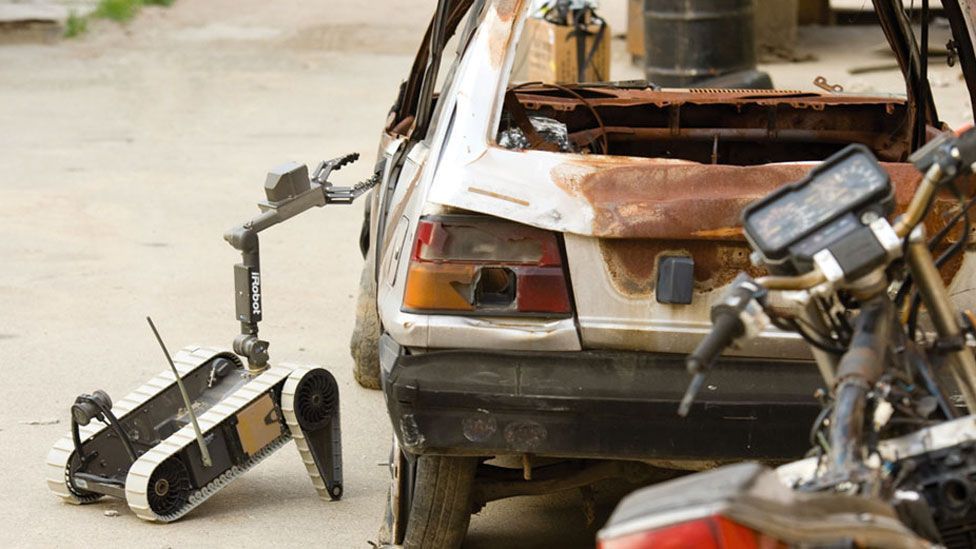 Currently, one of the main tasks for military robots like iRobots SUGV is looking for and disposing of explosive devices. (Copyright: iRobot)

Currently, one of the main tasks for military robots like iRobots SUGV is looking for and disposing of explosive devices. (Copyright: iRobot)