Einstein said it is impossible, but as Jennifer Ouellette explains some scientists are still trying to break the cosmic speed limit – even if it means bending the laws of physics.

"It is impossible to travel faster than light, and certainly not desirable, as one's hat keeps blowing off."
Woody Allen, Side Effects

Last summer, a small neutrino experiment in Europe called OPERA (Oscillation Project with Emulsion tRacking Apparatus) stunned the world with a preliminary announcement that it had clocked neutrinos travelling just a few fractions of a second faster than the speed of light. The news even briefly overshadowed the far more recognizable Large Hadron Collider’s ongoing hunt for the Higgs boson.

Despite careful hedging by scientists, the popular imagination jumped right from neutrinos to a viable spacecraft for fast interstellar travel. After all, the prospect of faster-than-light (FTL) travel has been a science fiction staple for decades, from wormholes and Star Trek’s original warp drive, to the FTL “jumps” used to evade the Cylons in SyFy’s Battlestar Galactica reboot. It takes years, decades, centuries even to cross the vast expanses of space with our current propulsion technology – a realistic depiction of the tedium of space travel in entertainment would likely elicit the viewer equivalent of “Are we there yet?”

So the OPERA announcement was bound to generate excitement, even if the neutrinos in question were only moving nanoseconds faster than light – hardly sufficient to outrun the Cylons, but nevertheless faster than c, the cosmic speed limit set by Albert Einstein back in 1905.

Unfortunately, the euphoria was premature: the OPERA results were incorrect, thanks to a calibration error. The culprit: a faulty cable connection in the GPS system used to time the neutrinos along their journey. That killjoy Einstein wins again.

But if the OPERA saga did tell us anything, it’s that the idea of travelling faster than light continues to capture the imagination. As Hollywood screenwriter Zack Stentz (Thor, a.k.a. “Vikings in Space”) said recently at a Los Angeles panel on the science of superheroes, “Every science fiction writer who wants to get out of the solar system [within a human lifetime] gloms onto that. It’s the leap of faith that lets you tell stories on this bigger canvas.”

“You cannae change the laws of physics”

“Leap of faith” is a particularly relevant phrase to use here. The fact is we’ll never be able to travel beyond the speed of light, at least based on our current understanding of established physics.

As any object with mass accelerates – like a proton in the LHC – it gains energy, always needing just a little bit more energy to accelerate even further. The LHC, the largest and highest-energy particle accelerator we have, boosts protons as close to the speed of light as we can get, but they never quite hit the mark. If a proton did achieve that speed, it would need infinite energy to go any faster, and we don’t have an infinite supply of energy.

Equations don’t tend to lie, especially ones that have been tested and re-tested in countless experiments for over a century. For all practical intents and purposes, the speed of light is an insurmountable threshold.

But physicists would never make any progress at all if they threw in the towel quite that easily, and nobody thinks Einstein will have the final word in perpetuity. Many scientists are happy to consider the possibility of violations of relativistic principles, even if none have yet been experimentally confirmed.

One of the earliest proposed possibilities for FTL travel involved a hypothetical particle called a tachyon, capable of tunnelling past the speed of light barrier. This turned out to be more of a mathematical artifact rather than an actual physical particle.

However, another reason for all the OPERA-tic excitement was that back in 1985, physicists proposed that some high-energy neutrinos might really be tachyons, capable of interacting with an as-yet-known field, giving them just enough of an energy boost to break through the barrier. Such tachyon-like neutrinos would supersede photons as the fastest particles in the universe.

OPERA’s calibration error dashed those hopes, but there are still plenty of potential loopholes to be explored, such as the Star Trek-inspired warp drive mechanism first proposed by Mexican physicist Miguel Alcubierre in 1994. In general relativity, spacetime is dynamic, not static, warping and bending in response to the presence of mass or energy. Alcubierre suggested that it might be possible to encase a spaceship within a “warp bubble”, whereby space contracted in front of the craft and expanded behind it, enabling it to travel faster than light. But within that bubble, spacetime would remain essentially flat and the craft would technically “obey” the cosmic speed limit.

Alas, once again we face an energy problem: achieving that degree of curvature would require enormous amounts of energy – and negative energy at that – equivalent to the mass of Jupiter. To propel a spacecraft across the Milky Way galaxy may require more energy than can be found in the mass of the entire universe. A more energy-efficient ring-shaped design for such a warp drive was described recently at a symposium on interstellar space flight, offering a meager shred of hope to diehard space acolytes that for future generations, warp drive will be a reality.

However, given what we know about general relativity and quantum field theory, “It almost certainly can’t be done,” says Ken Olum, a cosmologist at Tufts. “Of course, if we are talking about quantum gravity, it’s hard to know, because we don’t really know what that is.”

Former Nasa scientist Kevin Grazier, who was the technical consultant for Battlestar Galactica, says that a version of the Alcubierre warp drive inspired the “jump drive” used in that series. It was based on the assumption that, in this fictional world, the Colonials had merged theories of electromagnetism and gravity, such that if you could create a very intense electromagnetic field, it would be functionally equivalent to an intense gravitational field capable of warping spacetime. Turning that ingenious fiction into a viable reality is another matter altogether.

If we really want to get speculative, Olum suggests FTL travel would be possible if exotic concepts, like those that emerge from superstring theory, prove to be correct.

We inhabit four-dimensional spacetime, but various permutations of superstring theory suggest our universe is just one of many, co-existing within a bubble of five-dimensional spacetime called the “bulk.” Within that bulk, our universe lines up in parallel with all the others, just like the pages in a book. Olum explains that, hypothetically, one could take a shortcut through the bulk, thereby arriving at your destination sooner than if you had travelled along your four-dimensional surface, or brane (short for membrane) as it is known.

Even then, there is a catch. “In brane theories, only gravitons can travel through the bulk,” says Olum. So one would need to invent a machine that could scan an object and transmit the information in the form of gravitons to a second machine on the other end which would then reconstruct that object – shades of teleportation, only with gravitons.

Considering we have yet to observe gravitons in our most powerful accelerators, and the current record for teleporting small clouds of atoms is the relatively non-Cylon-troubling distance of 143 kilometres (88 miles), this scenario must also remain firmly in the realm of science fiction, at least for now. Science advances, but it does so slowly, at a pace nowhere near the speed of light. 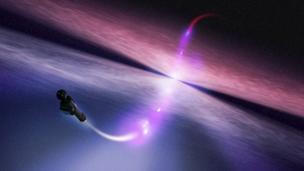 Searching for a starship 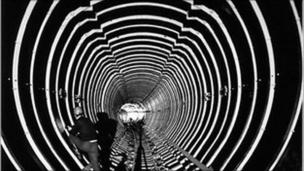 Light speed: Flying into fantasy
Around The BBC