Loading
Uniquely Human | Animal
Is language unique to humans?
Share using EmailShare on TwitterShare on FacebookShare on LinkedinShare on Whatsapp 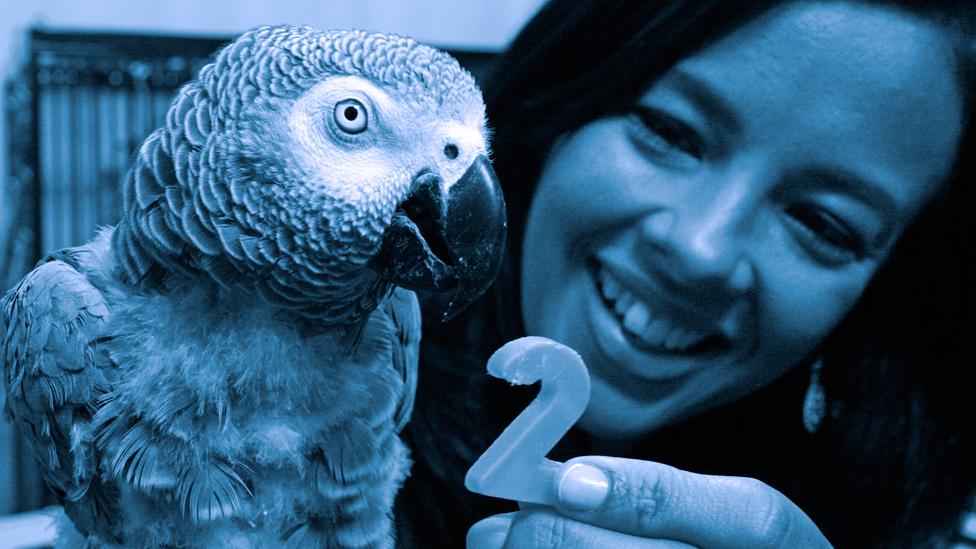 By Jason G Goldman 17th October 2012
Animals communicate with each other, and sometimes with us. But that’s where the similarity between animals and us ends, as Jason Goldman explains.
W

When Alex unexpectedly passed away after only thirty-one years of life, his last words to his dearest friend were, "You be good. See you tomorrow. I love you." A touching sentiment indeed, but all the more impressive because Alex was an African Grey Parrot. Over the course of thirty years of work between psychologist Irene Pepperberg and Alex, purchased from a Chicago pet store at one year of age, the parrot amassed a vocabulary of some 150 words. According to one report, he was able to recognize fifty different objects, could count quantities up to six, and could distinguish among seven colours and five shapes. He also understood the ideas of "bigger" and "smaller", and "same" and "different".

Alex isn’t the only non-human to display such talents. Kanzi is a 31-year-old male bonobo who lives in a small social group with others of his species at the Great Ape Trust in Des Moines, Iowa. Bonobos, together with chimpanzees, are our closest living relatives. After years of working with primatologist Sue Savage-Rumbaugh, Kanzi can now understand several thousand words, and can communicate using a kind of keyboard that contains around 400 visual symbols called lexigrams.

Then there's Rico, a border collie who knows the labels of around 200 different items, and can retrieve them on command. Compared to Alex and Kanzi, this might not seem particularly impressive or interesting. However, Rico can learn the label of an item that he's never seen before after only hearing the word once. If there are 20 items in front of him, 19 of which he already knows the labels for, and he is instructed to retrieve an item using a word he had never heard before, Rico can infer that the unfamiliar item matches with the unfamiliar word. Weeks later, he still remembers the pairing. This process of word-learning, called fast-mapping, is identical to the process through which young children learn new words.

Not to be outdone by the feathered or furry, there’s the female Atlantic bottlenose dolphins Akeakamai and Phoenix who lived at the Kewalo Basin Marine Mammal Laboratory in Honolulu, Hawaii. A famous paper by marine biologist Louis Herman and colleagues in 1984 described Akeakamai and Phoenix's abilities to understand sentences in visual or acoustic artificial languages.

The researchers gave the dolphins instructions constructed entirely of familiar words, but in various combinations that would only be understood by knowing the grammar of the sentences, not just the vocabulary. For example, "Phoenix Akeakamai Over" was an instruction for Phoenix to swim to Akeakamai and jump over her, while "Akeakamai Surfboard Fetch Speaker" instructed Akeakamai to get the surfboard and bring it to the speaker. In each case the dolphin had to interpret the verb "over" or "fetch" according to the noun: did "fetch" apply to the surfboard or to the speaker, for instance?

Primates, birds, cetaceans, dogs and other species have proven able, through extensive training, to understand human words and simple sentences. And as Ed Yong explained, in some exceptional cases, such as Kanzi and Alex, they've even been able to engage in two-way communication with humans.

However, language is more than a process through which meaning is attached to words or short sentences. Language might be described as the ability to take a finite set of elements (such as words), and using a set of rules (grammar and syntax) to create infinite combinations, each of which is comprehensible. Given this definition, it is perhaps not surprising then that cognitive psychologists sometimes speak of a "grammar of action".

Like sentences, the catalogue of human actions is infinite. We stretch, bend, and kick. We build bridges and prepare meals. We perform an endless variety of dance routines. We make paper airplanes. A complex action, like hammering a nail, can be broken down into its constituent actions – grasping, striking, reaching – just as a sentence can be broken into its units – nouns, verbs, adjectives. In 1951, cognitive psychologist Karl Lashley proposed a link between language and action. "Not only speech,” he wrote, “but all skilled acts seem to involve the same problems of serial ordering, even down to the temporal coordination of muscular contractions in such a movement as reaching and grasping." Just as a stream of speech does not contain explicit pauses between words, fluid actions like nail hammering do not contain breaks between their components. Yet humans effortlessly parse speech streams and action sequences into their parts.

What is language, then, if it can describe the way we process actions as well as the way we manipulate words? Understand from this perspective, language is not a method of communication, per se, but a rather method of computation. Other animals clearly communicate with one another, sometimes in fairly elaborate ways. Whale sing, monkeys howl, birds chirp. Lizards bob their heads up and down to communicate, and some squid do it by regulating the colouration of their skin cells. But none of these processes can be explained by language.

What makes human language unique is not that it allows us to communicate with each other, but that it allows us to do so with infinite variety. A monkey can scream to warn its troopmates of an approaching predator, or alert them to a cache of tasty food, but it can't communicate something like "doesn't that hawk have a funny looking beak?" or "with a little salt, this fig would taste divine". It certainly can't create nonsensical yet understandable sentences like “Colourless green ideas sleep furiously”.

No, only humans can utter that sort of grammatical nonsense.

Will We Ever?
1Will we ever... talk to animals?
2Chimps use 'human-like gestures'
Around the BBC