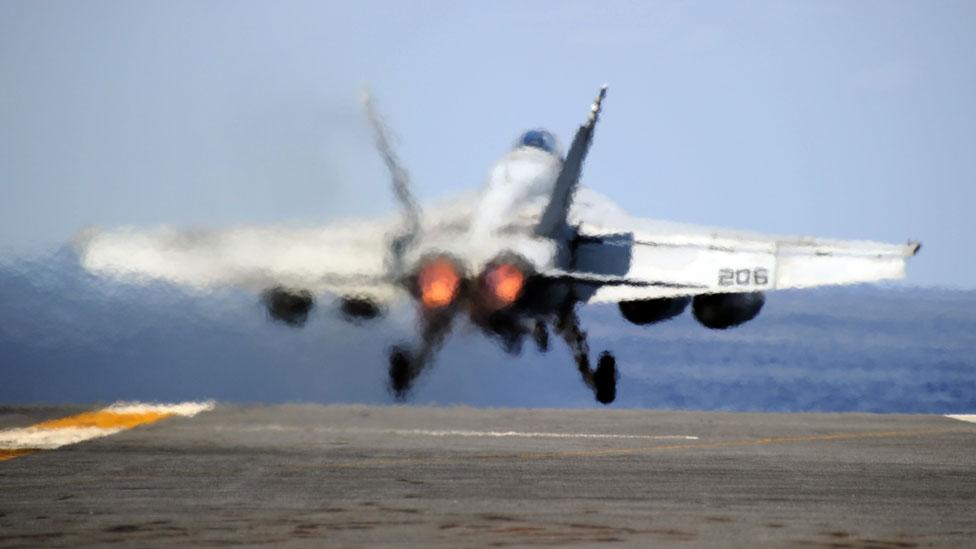 By Jon Stewart 18th November 2014
The US Navy is working on turning seawater into fuel for its planes. But will the idea ever fly?
T

The US Navy has a problem. Its ships often stay at sea for months on end far away from home. To keep its fleet of ships, boats and aircraft running, a fleet of 15 oil tankers roams the globe acting like floating gas stations. According to the Naval Research Laboratory (NRL) nearly 600 million gallons (2,700 million litres) of fuel were delivered to Navy vessels in 2011.

Moving those tanks of oil is an expensive business and that is even before the cost of the oil itself is factored in. Over recent years, the price of oil has fluctuated wildly, but has generally been on an upward trend. Throw in the fact that many of the large oil-producing nations are generally situated in volatile regions of the world, and you begin to understand why the Navy is interested in cutting its dependence on oil.

One of the most interesting lines it is pursuing is a plan to generate jet fuel from a source that is abundance wherever the fleet is: seawater.

Jet fuel, along with all other common fuels, is a hydrocarbon. As the name suggests, these are chains of hydrogen and carbon atoms. In theory if you can combine those two elements in the correct way you can produce a fuel.  It turns out that seawater is a good source of both ingredients – it contains hydrogen in the H20, and a lot of dissolved carbon dioxide (CO2). It also has the advantage of occurring in abundance - and for the Navy - close to the action.

“The ocean contains about 100mg per litre of CO2,” explains the NRL’s Dr Heather Willauer. “It’s about 140 times more concentrated in sea water than it is in the air.”

Dr Willauer has developed a machine to grab those raw ingredients directly from sea. “We have an electrochemical unit. We feed it seawater, we acidify the seawater, and what comes out of the cell is oxygen, CO2, and hydrogen,” she says.

The oxygen is released, and the other two gasses are combined to make a liquid fuel.

“You take those components (CO2 and hydrogen), and use a catalytic process, for a gas to liquid type reaction,” she adds. The basics are similar to the descriptions of a process for converting water and air into petrol, that grabbed headlines last week.

If both sound too good to be true, then you would be right. There is a catch. According to the first law of thermodynamics, nothing comes for free. To get useful energy out, you need to put useful energy in to the system. It is like combustion in reverse. Energy is needed to break the water and the carbon dioxide down into constituent parts and then more energy – and time – is needed to form the hydrocarbon.

“We do have to have a power source to supply the electricity for the electrochemical process,” admits Dr Willauer. That could come from solar or – more likely - the nuclear reactors already onboard many ships.

The system would also only have marginal environmental benefits. It would reduce the burden of moving fuel around, but that may be offset by the production process. And, in the end, it would still produce traditional fuel with its associated emissions when burnt.  For the Navy, this is more about convenience.

At the moment a 1.5mx1.5m (5ftx5ft) prototype is installed onshore at an NRL engineering facility in Key West, Florida. It has been using seawater from the Gulf of Mexico to test the conversion process and is now focused on optimising the technology and scaling it up. They are also beginning to think about the engineering challenges of putting a system to sea.

“Because we are developing technologies to potentially be used by the Navy, that goes into the technology when we develop it,” says Dr Willauer. “We want to make sure it has as small a footprint, and a small a size as possible, and keep those constraints in mind.”

The team is also willing to stick its neck out and predict a cost for jet fuel produced by the process of $3 to $6 per gallon.

If they were able to keep to that cost – and there are plenty of people who think that the real cost would be much higher – it would give it the edge over another fuel the Navy is currently experimenting with.

Earlier this summer, the Navy ran its first large-scale exercise fuelled by a $12m blend of biofuels produced from everything from chicken bones to algae. The Pacific demonstration was part of a project known as Great Green Fleet. During the manoeuvres, F/A-18 Super Hornets and other aircraft screamed off the flight deck of the USS Nimitz over the Pacific Ocean powered by conventional jet fuel mixed with the biofuels. Two destroyers and a cruiser also ploughed the oceans fuelled by a similar mix.

All went well with the exercise, until the costs came in. The biofuel mix cost around $26 per gallon ($6 per litre), significantly more than the $3.50 per gallon ($1 per litre) paid for regular fuel. Critics pointed out that the Navy’s job was defending the US, not helping the emerging biofuel industry bring down its costs, a point that has been compounded by looming defence cuts. For now, the Navy is continuing with its vision and has reiterated its commitment to have half of its fleet powered by alternative energy sources by 2020.

But don’t expect that fleet to be accompanied by refueling ships, sucking in seawater. That research is far behind the biofuel work. It will take six to eight years for the NRL to fully develop the seawater idea, depending on funding. And then it will take many more years to build working systems. By then, the Great Green Fleet may have already sailed.

HyperDrive
1Will solar planes ever take off?
2Do we need aircraft carriers?
Around the BBC