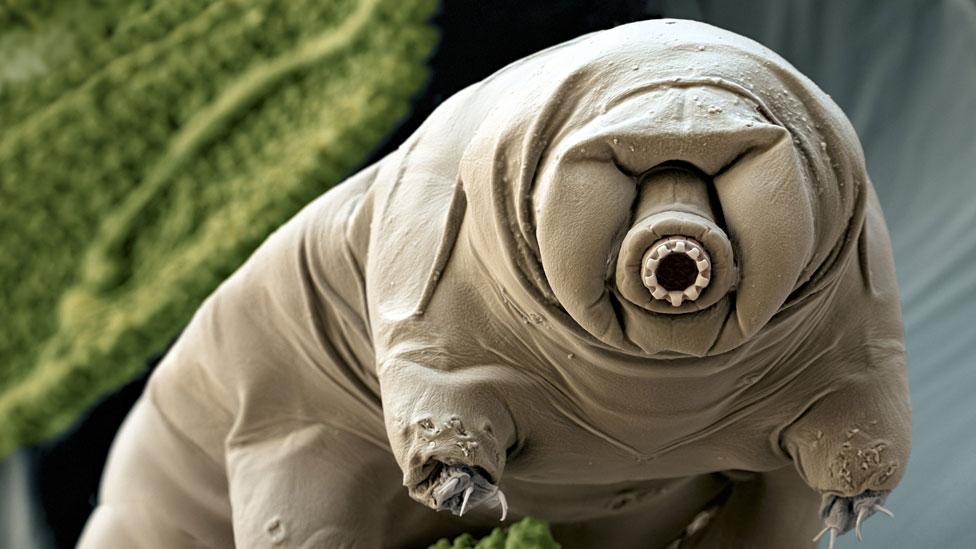 By Emily Anthes 18th November 2014
A strange creature has a trick that could change the delivery of vaccines – and other medical supplies – forever.
W

Water is crucial for life. Or so we are told.

Some organisms, it turns out, have a remarkable ability to survive near complete dehydration - a feat known as anhydrobiosis or “life without water.” There is the resurrection plant, brine shrimps, nematode worms and baker’s yeast.

Or take a class of microscopic animals known as tardigrades - commonly known as water bears - which live in thin films of water present in soil, mosses, leaves, and more. “They live in water and when where they live dries up, they dry up,” says John Crowe, a biologist at the University of California, Davis, who has been studying anhydrobiosis for four decades. But they don’t die - instead, they can remain in a state of suspended animation for decades, and when they’re rehydrated, they spring right back to life.

While these remarkable resurrections are interesting curiosities in their own right, they have also inspired a wave of potentially life-saving applications. Now, scientists and start-ups are beginning to copy these creatures’ tricks to preserve critical lifesaving compounds, such as vaccines, DNA and stem cells. They hope to extend the shelf life of these substances from mere days to months or even years, transforming medicine everywhere from rural Africa to the battlefield.

Early in his career, Crowe was inspired by water bears—and their remarkable capacity for dehydration. “I started this whole business with a curiosity - how do they do this?” Crowe says. “Humans can’t do this.” Indeed, when our cells dry out, they shrink and shrivel. The proteins inside them clump together and the membranes fuse, causing irreversible damage. Upon rehydration, the cells often completely disintegrate.

In the 1970s, Crowe discovered that the secret to the survival of many anhydrobiotic organisms is a simple sugar known as trehalose. As these critters dry out, they manufacture this sugar. The sugar, in turn, essentially behaves just like water inside the cell. As the water molecules disappear, molecules of trehalose slip into the spaces that the water once occupied; the proteins in the cellular membrane that were once bonded to water bond to the sugar instead. In this way, the sugar stabilizes the cell, holding its membrane in place and preventing the cell from shriveling and its contents from moving around or fusing together. With trehalose inside the cell, Crowe says, “the proteins remain right where they were in the membrane, as if it were fully hydrated.”

As Crowe developed this “water replacement theory” of trehalose, he began to wonder: If trehalose could stabilize the cells of anhydrobiotic organisms, could it also be used to protect human cells from damage when they were dried? He began to realize that the biomedical implications could be huge. For instance, freeze drying - the process used to dehydrate and preserve all sorts of perishable items, especially food - could extend the shelf life of platelets, cellular fragments that circulate in the blood stream, clumping together to form clots that stop bleeding and secreting substances that promote wound healing. Transfusions of platelets can be life saving for patients suffering from massive blood loss, as well as those undergoing chemotherapy or certain surgical procedures.

But platelets are tricky to use therapeutically. Refrigeration renders them useless, so they must be stored at room temperature. That drastically limits their shelf life; blood banks discard human platelets after just three to five days, and even then, the cell fragments occasionally get contaminated with fungi, bacteria, or viruses, causing potentially fatal complications in patients who receive transfusions. It also means there’s a chronic shortage of platelets.

If scientists could figure out how to dehydrate the platelets without destroying them, it would be a game changer.

The trick is getting the trehalose into the platelets, a task that Crowe discovered to be surprisingly easy. All he had to do was gently heat the platelets and then let them sit in a bath of trehalose solution for several hours; the platelets slowly took the sugar up into their structure. Once the platelets were loaded with trehalose, Crowe freeze-dried them, turning the platelets into a dried powder.

Then, using nothing more than water, Crowe and his colleagues rehydrated them. To their delight, they discovered that more than 90% of the platelets were intact and viable. They did observe some slight abnormalities in the rehydrated platelets, but found that they largely acted like fresh platelets, forming clots just like their non-freeze-dried counterparts. “They’re not fully functional platelets, but they’re close enough,” Crowe says. “You just add water and they’re ready to go.” (For comparison, Crowe and his colleagues also freeze-dried platelets that had not been loaded up with trehalose. Most of these platelets completely disintegrated when the researchers tried to rehydrate them, and the few that didn’t had all fused together into a useless clump.)

Crowe’s freeze-dried platelets can be stored safely at room temperature for two years - a drastic improvement from five days. The freeze-dried platelets are currently under study in clinical trials, which Crowe expects to be complete within the next two years. If the platelets pass this test, they’ll be ready to be used clinically. The US Defense Advanced Research Projects Agency (Darpa), part of the Department of Defense, funded much of Crowe’s research and is particularly eager to get its hands on the platelets, which are usually unavailable to soldiers on the front lines.It would also like to see the work extended to other potentially life-saving substances. Darpa’s hope, Crowe says, “is that everyone going into combat will have in their backpacks a little packet of their own platelets and stem cells and blood cells”.

Crowe recently retired from active research, but there are now a host of scientists and start-up companies that are building upon his work. Some scientists are even taking a genetic engineering approach - rather than loading cells with trehalose from the outside, they’re trying to engineer cells with the genetic machinery to produce the sugar on their own.

Meanwhile, others are using trehalose to preserve DNA in a dry state or create dry vaccines that do not need to be refrigerated. Shelf-stable and easy to transport, such vaccines could be shipped to even the most remote corners of the globe, expanding access to a crucial tool of public health. If trehalose keeps inspiring innovations like these, it could be serious diseases that find themselves all dried up.

The Real Risk
1Vaccines: The numbers
Will We Ever?
2Will we ever… have HIV vaccines?
3Laser less painful than needles
Around the BBC