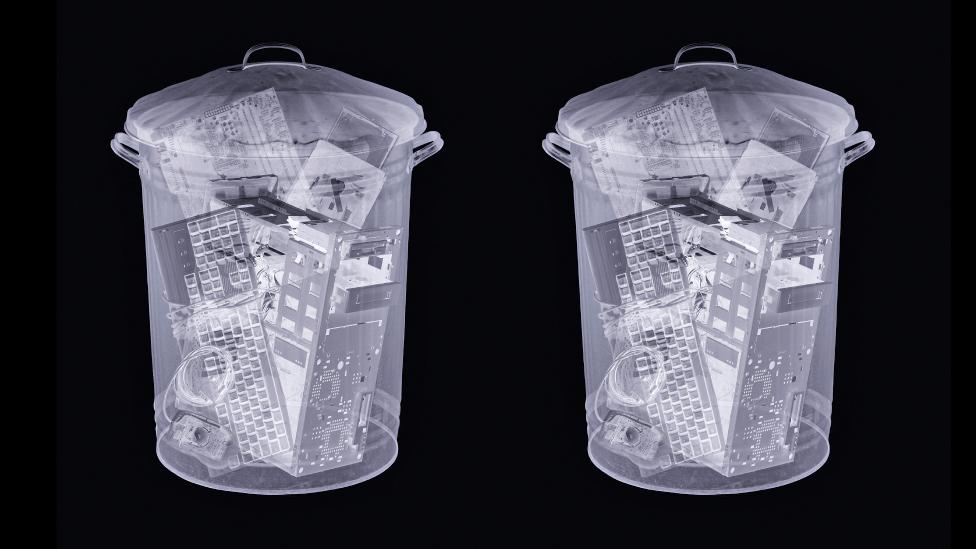 By Gaia Vince 29th November 2012
In the second of a two-part series, Gaia Vince explains how our consumer appetite is draining the planet of its resources, and why it is time to act more responsibly.
A

As I said in my previous column, we are the biggest force in moving the planet’s rocks and sediments around. Our global extractions are environmentally damaging and depleting some resources to the extent that they are in danger of running out.

Many of those resources find their way into the goods, gadgets and machines that we find indispensable in our everyday lives. But do we really need so much stuff, or are we simply addicted to the new? There's no doubt that our consumption of resources from food to gadgets has risen dramatically over the past 60 years, and much of the world seems to be in the grip of a shopping epidemic. But is there a conscious effort driving it?

There have been many times during my travels when I've needed something repaired, from rips in my backpack, to holes in my clothes, zippers that have broken or memory cards that have lost data. From India to Ethiopia, I have had no trouble in finding someone who can sort the problem out, repair what is broken or find an ingenious way of side-stepping the issue. In rich countries, such items often would be thrown away and replaced with new ones without a second thought. But the developing world is still full of menders, make-doers and inspired users of others’ scrap. I’ve seen a bicycle in Nairobi made from bits of car, a colander and a leather belt; aerials made from all manner of implements; and houses constructed out of old boat sails, rice sacks and plastic drinks bottles.

But then there are those items that seemingly can’t be repaired. My camera shutter, battered by the dust and grime of travel, no longer works. I'm told I should throw away my camera, even though it works fine, apart from the shutter mechanism. Like the majority of consumer electronics, my camera has not been designed to be easily reparable. Thirty years ago, I could have found service manuals and spare parts for all camera models, as well as a thriving repair industry. But things have changed. Camera models have got far more numerous and complicated, and manufacturers no longer release repair manuals.

Since the mobile phone handset market reached saturation in Europe and the United States about a decade ago, we have chosen not to wait for our devices to fail. Almost all new phones purchased are “upgrades”, replacing functioning phones simply for reasons of fashion or for technological additions that many of us rarely use, and which could otherwise easily be achieved through software upgrades to existing handsets. Indeed, most phone companies compete for business by automatically upgrading customers’ phones every year. And these smart phones use mined resources from some of the most ecologically sensitive areas of the world, as a recent Friends of the Earth campaign points out.

The idea that something that works fine should be replaced is now so ingrained in our culture that few people question it. But it is a fairly recent concept, brought about by a revolution in the advertising and manufacturing industries, which thrived on various 20th century changes, including the mass movement of large populations to cities, the development of mass production, globalisation, improved transport, international trade and public broadcast media.

The earliest example of manufacturers convincing people to frequently replace a product may be the so-called “lightbulb conspiracy”, in which a group of companies is supposed to have orchestrated the Phoebus Cartel to prevent companies from selling lightbulbs with a longer than 1,000-hour lifespan (most settled on 750 hours), even though bulbs lasting more than 100,000 hours existed. The cartel said its intent was to develop international standards, but the net result was that households needed to replace their bulbs regularly, providing a far larger consumer market.

This way of selling more products by designing products that deliberately fail, cannot be repaired, or have a set lifespan imposed in some other way is known as planned obsolescence. However, it is not just a cynical plot dreamed up by manufacturers to boost profits, many politicians and economists believe it to be a societal necessity. The idea was born in the US during the 1930s depression as a way to get the economy moving again by compelling people to buy more stuff. There were plenty of factories and masses of unemployed looking for gainful work, the trouble was the people who could afford to buy things already had them. What was needed, strategists proposed, was a reason for shoppers to buy things they already had, or didn’t know they “needed”.

By the 1950s, planned obsolescence had become the dominant paradigm in mass production with things no longer built to last. A sophisticated advertising industry persuaded people to shop. Mechanisms flourished to make this easier, from department stores to credit. Consumerism was born. Some industries, such as fashion are predicated on planned obsolescence, with items being made to last a single season or less. Other industries are following fashion’s high-turnover model and bringing out products that have cosmetic gimmicks or seasonal appeal but which will soon appear dated.

Many people wonder whether electronic products are being designed to fail, from television sets, which have heat-sensitive condensers deliberately fitted onto the circuit board next to a heat sink connected to the transistors, to washing machines with ball-bearings fitted inaccessibly into the drums so they cannot be replaced. Specific lifespans are programmed by the manufacturers into chips in some equipment, so that printers will stop working after a preset number of pages (sending a message: “internal error”), coffee makers will cease functioning after a preset quota of brews, and memory cards will stop uploading after a preset number of photo uploads. The user is then forced to buy a replacement. Some computers are difficult to upgrade – new versions of software are upwardly compatible so files won’t work on older models or, as in the new Apple MacBook Pro, the RAM is soldered to the motherboard, making it difficult or costly to upgrade or replace the hard drive and battery. As a result, users can find themselves buying a new computer every couple of years.

Another trick is to make parts and accessories incompatible between brands or even models of the same brand. Thus, not only do consumers need to buy a different memory card or battery or charger for each device or brand of electronic equipment they buy, from phones to laptops to toothbrushes, but they must also buy a new charger or adaptor when they upgrade from an iPhone 4 to the iPhone 5, for example.

Some consumers are starting to hit back, though, advising people on the internet how to find and remove the printer chip or over-write the memory card software. But this is technically challenging and time-consuming, and most people aren’t even aware of the reason for their device no longer working.

Californian Kyle Wiens is the type of sophisticated electronics tinkerer that emperors of the IT industry like Microsoft and Apple dream of employing. But Kyle is a guerilla geek – he slipped through their net and crossed over to the consumer side. Instead of dreaming up intricate ways of fitting more and more components into ever-slimmer gadgets, Kyle is taking them apart.

It started a decade ago, when he was a student and his iBook stopped working, Kyle explains. “I couldn’t get find a service manual for it, so as my friend [fellow student Luke Soules] and I took it apart to fix it, we created our own manual.”

Kyle and Luke began taking apart computers and other equipment, getting around the copyright protection by creating their own service manuals from scratch, and posting them online for free. The pair called their site iFixit.com and over the past decade, they have expanded to hundreds more manuals, encouraging home hackers to create their own manuals for the site – “we’re a Wikipedia of service manuals” – and they also sell the tools and spare parts users need to fix their own electrical devices.

They are contributing to a cultural shift in perception, Kyle says. “When someone has repaired their broken iPad or whatever, it’s a life-changing experience. That person will become a different consumer. They will choose new products based on how long-lasting they are and how easy they are to take apart and repair.”

At the moment, there is little onus on manufacturers to improve, and indeed things may be getting worse. As Apple’s beautiful-looking and increasingly thin gadgets take an ever-larger share of the market, other manufacturers are following suit. Motorola and Nokia, both of which were known for their durable phones with easily replaced long-lasting batteries, have now both released thin phones with glued-in batteries.

But some companies have been bucking the trend. HP and Dell release service manuals and make computers that are easily upgradable and repairable – iFixit.com recently gave HPs Z1 model a score of 10 out of 10 for repairability.

And other companies are joining the move towards a circular economy, in which economic growth is uncoupled from finite-resource-use. Instead of the linear manufacturing route: mining materials, fabricating, selling, throwing them away; a circular economy is based around making products that are more easily disassembled, so that the resources can be recovered and used to make new products, keeping them in circulation. British yachtswoman Ellen MacArthur is a strong advocate of the concept and commissioned a report into the idea, which found that the benefits to Europe’s economy alone could be $630 billion, based on cycling just 15% of materials in 48% of manufacturing and just being recycled once.

The high-end outdoors clothing company Patagonia, for example, issues a guarantee that it will repair any of its products for free over their lifetime, and employs a team of seamstresses to do just that. And in 2011, it actually ran an advertising campaign asking consumers to buy less of the stuff they don’t need, to curb waste and environmental damage.

As mines become depleted, it could soon force the market to change its recent ways. During the course of the 20th century there was a steady fall in the price of commodities, but that price has been climbing since 2000. “We’re moving towards a resource-limited economy, which means manufacturers are going to have to move their business model towards remanufacturing and repairs, as the cost of rare earth metals and other resources slash profits,” Kyle says. Perhaps, then, planned obsolescence will begin to reach its own expiration date.

Matter of Life & Tech
1Cycle to recycle old gadgets
Smart Planet
2Beating our consumption habit
3Why keep an ancient appliance?
Around the BBC