Loading
Will We Ever? | Brain
Will we ever… have cyborg brains?
Share using EmailShare on TwitterShare on FacebookShare on LinkedinShare on Whatsapp 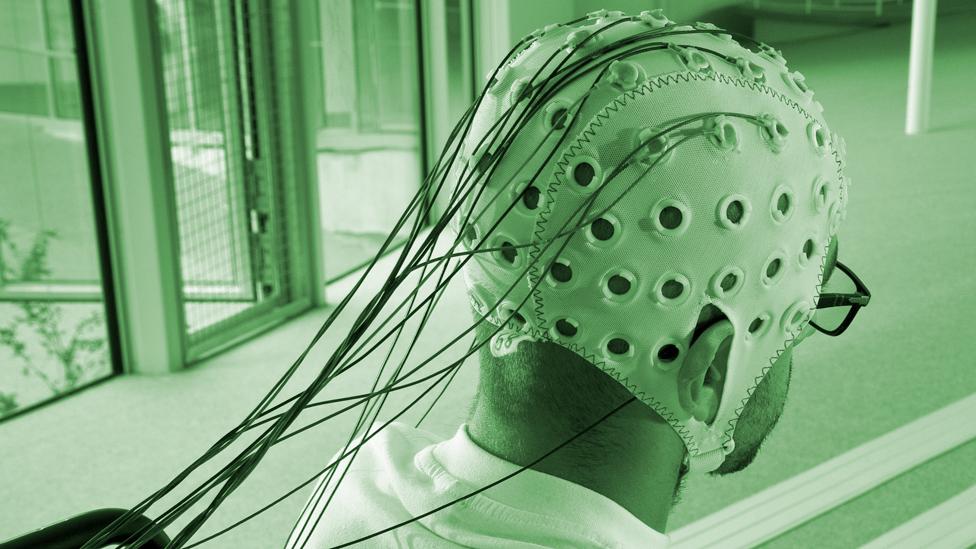 By Martin W Angler 18th December 2012
After recent triumphs showing that implants could repair lost brain function, Martin W. Angler explores how soon we can use this technology for creating enhanced humans.
F

For the first time in over 15 years, Cathy Hutchinson brought a coffee to her lips and smiled. Cathy had suffered from the paralysing effects of a stroke, but when neurosurgeons implanted tiny recording devices in her brain, she could use her thought patterns to guide a robot arm that delivered her hot drink. This week, it was reported that Jan Scheuermann, who is paralysed from the neck down, could grasp and move a variety of objects by controlling a robotic arm with her mind.

In both cases the implants convert brain signals into digital commands that a robotic device can follow. It’s a remarkable achievement, one that could transform the lives of people debilitated through illness.

Yet it’s still a far cry from the visions of man fused with machine, or cyborgs, that grace computer games or sci-fi. The dream is to create the type of brain augmentations we see in fiction that provide cyborgs with advantages or superhuman powers. But the ones being made in the lab only aim to restore lost functionality – whether it’s brain implants that restore limb control, or cochlear implants for hearing.

Creating implants that improve cognitive capabilities, such as an enhanced vision “gadget” that can be taken from a shelf and plugged into our brain, or implants that can restore or enhance brain function is understandably a much tougher task. But some research groups are being to make some inroads.

For instance, neuroscientists Matti Mintz from Tel Aviv University and Paul Verschure from Universitat Pompeu Fabra in Barcelona, Spain, are trying to develop an implantable chip that can restore lost movement through the ability to learn new motor functions, rather than regaining limb control. Verschure’s team has developed a mathematical model that mimics the flow of signals in the cerebellum, the region of the brain that plays an important role in movement control. The researchers programmed this model onto a circuit and connected it with electrodes to a rat’s brain. If they tried to teach the rat a conditioned motor reflex – to blink its eye when it sensed an air puff – while its cerebellum was “switched off” by being anaesthetised, it couldn’t respond. But when the team switched the chip on, this recorded the signal from the air puff, processed it, and sent electrical impulses to the rat’s motor neurons. The rat blinked, and the effect lasted even after it woke up.

The media proclaimed this achievement as being an “artificial cerebellum“ and a “cyborg rat“. This isn’t quite true: first, the researchers modelled only one specific circuit in the cerebellum; and second, they also stated that the purpose of the device is not to improve a healthy brain, but to help people who have lost motor functions after a stroke.

In September this year, American scientists said they had created a way of enhancing a monkey’s decision making by about 10%. One of the team leaders, Theodore W. Berger, let monkeys play a picture-matching game and recorded their neurons’ activities from the cerebral cortex, where decision-making takes place. They found that the signal pattern differed for correct and incorrect decisions. The team let the monkeys play the same game again, but before a monkey made a decision, they injected the “correct” signal pattern into the brain by sending a sequence of electrical pulses through implanted microelectrodes – much like Morse code. As a result, the monkeys picked the correct picture.

The technique also works on rats, switching their long-term memory on or off, and one day Berger hopes his neuroprosthesis could restore lost memories from people with Alzheimer’s disease. If this works, this could improve the brain’s ability to push short-term memories into the long-term memory – creating humans who remember more than others.

It will be a long time before scientists successfully convert experimental methods using electrodes to a fully-functioning, implantable chip, but there is an indirect alternative being developed. Transcranial direct-current stimulation (tDCS) is a way of running electrical current through the brain with electrodes attached to the outside of the skull. The US Defence Advanced Research Agency (Darpa) currently uses tDCS to improve the learning speed of snipers, claiming it cuts the learning curve by a factor of 2.5. There are issues, though. "They learn more quickly but they don't have a good intuitive or introspective sense about why,” says Vincent Clark, neuroscientist at the University of New Mexico.

Such devices were initially expensive, but now GoFlow sells a DIY kit for $99, which consists of two electrodes, cables and a 9-volt battery. So, in theory, everybody can try and tune his or her own brain at home. But if it is not applied correctly, anything could happen – from enhancing intelligence (intended), rewiring our brains (who knows?) through to electrocuting ourselves (not intended). Neuroscientist Roi Cohen Kadosh from Oxford University says he wouldn’t buy the DIY kit, because he thinks it is premature to distribute it to non-experts. “People might feel like they should stimulate their brain as much as they want, but just as buying a medicine on the counter, you need to know when to use it, how often, in what conditions and in what cases you should not take it.”

So when will we be ready to plug in brain chips to think faster? "As for the technology, we will be ready very soon," says Verschure. He is convinced that it will take at least 10 years before his artificial cerebellum will actually make it into a human brain. To do so, researchers must also solve technical problems, such as providing low-voltage power supplies for the prostheses. Another, more general, problem is that not all other brain regions are as well characterised, “and this won’t change so soon", says Verschure.

Like any other type of medical implant, neuroprostheses mustn’t cause any unwanted reaction once they are in the body. The spiky microelectrodes are mostly made of platinum, silver and iridium, all of which are quite biocompatible and cause relatively few reactions. However, upon implantation the electrodes can injure the brain’s tissue, which in turn becomes inflamed, scarred and eventually non-responsive to electrical stimulation. As a result, the brain implant can’t work anymore, as a study found.

Another issue that might prevent neuroprostheses from being applied soon, according to Tel Aviv University’s Mintz, is the host of unanswered ethical questions. “How many neurons do we have to replace by machine parts until we consider our brain a machine?” he asks. “A hundred? Millions? Are we still humans then?” Mintz thinks these questions should be discussed at length by ethics and law commissions before products are ready to hit the market. That said, he still believes in the success of neuroprostheses. “I think it will not be possible to stop this technology,” he says.

While researchers address technical and health issues, there’s one issue that hasn’t been explored as much – security. Hackers could pick up and alter electrical signals from neuroprostheses, just like any other signal in the world. “They could manipulate a person and let him or her do what they want,” claimed Jens Clausen, Professor of Bioethics at the University of Tübingen, Germany, in 2006.

Being a computer scientist myself I know how easy it is to pick up wireless signals, manipulate and re-inject them. I cannot imagine a brain implant hitting the market without proper encryption of the transmitted signals. Why would we protect our WiFi networks and not do the same for our thoughts? After all, wireless data transfer technology for neuroprostheses is already underway.

And then there is the question of who is entitled to enhancement technologies. Cochlear implants may have been around for decades, but 75% of all implants have been fitted in people in developed countries, 25% of which are in the US. Is this fair? When it comes to newer technologies like tDCS, Cohen Kadosh says it is, because it depends on the price of neural enhancements. Once new and expensive technologies become as cheap as caffeine, everybody will have the chance to get them.

So, at least for the next decade, brain implants will focus on specific areas. The more brain regions we understand, the more such devices can be built. But scientists also need to think about how to make them reliable, safe and secure. And affordable. If their work succeeds, how smart we can be could depend on one’s financial means. Is this really the kind of world we want to live in?