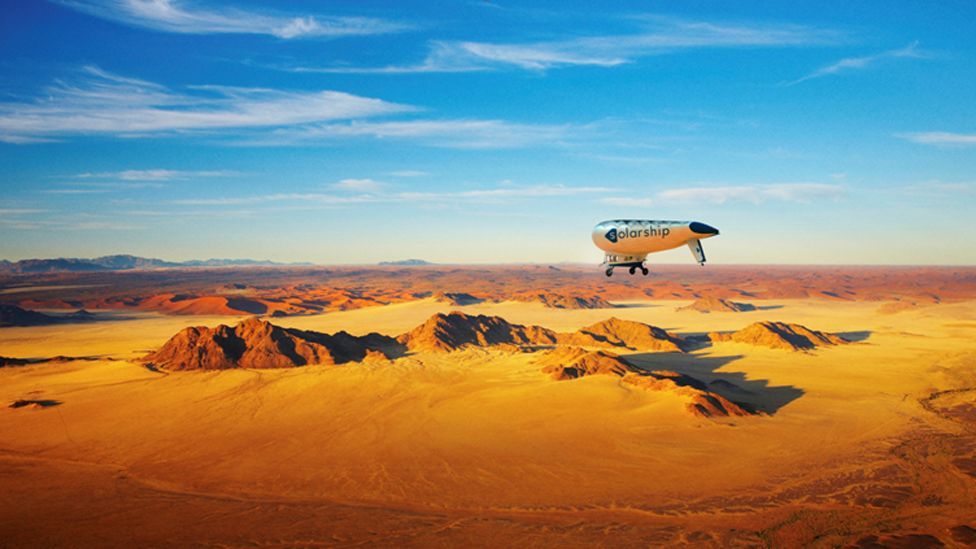 By Jonathan Kalan 18th November 2014
The ambitious plan to use solar-powered 'lighter-than-air' craft to deliver life-saving supplies in Africa.
O

One of the last things you might imagine seeing hovering above the dense jungle canopy of the conflict-riven Democratic Republic of Congo in Central Africa is a futuristic-looking air ship powered only by the sun.

But for the last 30 years, Canadian entrepreneur Jay Godsall has been hoping to do just that. Since high school, he has dreamt of building a solar-powered airship to help deliver critical supplies to remote areas in Africa. Now, finally, his project is beginning to grow some wings.

“Airships are older than radios, older than automobiles,” claims Godsall, Founder of Solar Ship, the Toronto-based company now building the unique aircraft, “but no one has quite had the mission to do something like this with one.”

The solar ship is a hybrid aircraft - part bush plane, part airship - powered by solar panels, lifted by helium, and designed to access some of world’s most hard-to-reach places, where roads don’t exist and planes can’t land.

Solar panels - spread across the topside of the aircraft - power an electric motor, which then turns a propeller and provides the thrust necessary for taking off, flying and landing. The aircraft is suspended by a giant helium-filled balloon, which generates lift statically (exactly like a blimp.) The buoyancy from the helium also helps counterbalance the weight of the solar panels and batteries.

The real secret to the solar ship, however, is its ability to land just about anywhere. Unlike an airplane or airship, it is capable of taking off and landing in an area the size of a soccer field- one piece of infrastructure found virtually everywhere in Africa.

So far, the company has successfully built and piloted three solar ships of different sizes in Canada’s rugged and remote northern territories.  All of these reasons are why Godsall believes the ships are perfectly placed to deliver critical supplies to remote areas in Africa.

One of the greatest challenges to providing emergency relief services — such as medicines, vaccinations, food and essential supplies — is access. Traditionally, small bush planes and fully loaded 4x4’s have been used to serve the more “off-grid” communities, but their reach can be limited.

For example, in a place like the eastern Democratic Republic of Congo, thick jungles and rolling hills make it impossible for even the smallest planes to find enough space to land. Most rural roads are seasonal, and in the rainy season - when you have the highest potential for the spread of deadly diseases like malaria, dengue fever and cholera ­- these roads become nearly impassible.

If a car gets stuck or runs out of fuel, an entire stock of cold vaccines (which need to be kept below a certain temperature) can spoil.

A solar ship could simply drop in to these places without infrastructure, roads, or landing strips, and deliver the essential goods.

Godsall says it’s about solving the “last mile problem”, a phrase more commonly used to describe the difficulties in connecting the final leg of telecommunications networks to remote customers. In the context of international aid word, however, fixing the last mile gap can mean the difference between life and death.

“The project is about delivering medicines, and making sure people don’t die” claims Michel Reugema, Godsall’s former classmate who is from Burundi, in a Solar Ship fundraising video “The idea really hit home when my younger brother went 80 km outside of Bujumbura [in Burundi] and had a medical condition. He needed supplies, couldn’t get them, and died.”

While the humanitarian need is clear, whether a giant solar-powered airship is the solution Africa really needs, or can afford, is perhaps less so.

Dr Amy Lehman, founder of Lake Tanganyika Floating Health Clinic, an organisation that uses small boats to supply medical treatment around the great lake, including eastern Congo, has her reservations. She says a giant hovering aircraft no one has seen before might bewilder some communities.  “The eastern Congo is not a place you can just pull up in your hospital ship.”

Dr Lehman’s organisation uses small boats in its operations, although they would eventually like to build a large ship — of the water going kind. However, she says the organisation has taken its time “because we need to build the right relationships with local communities and partners,” something she believes anybody using a solar ship would also have to do.

However, Solar Ship is not an aid organisation.  They are an aircraft manufacturer with a social agenda, aiming to lease or sell solar ships to organisations and partners as another tool in their transportation arsenal.

Still, they may find it difficult to lift off in the African market.

“It’s priced for large agencies and foundations,” Dr Lehman says, “but they aren’t always the ones reaching the last mile. It’s usually the smaller, grassroots organisations who are on the ground- who know where soccer fields are, so to speak.”

She says other technology focused projects, such as Matternet, a project that aims to use a network of unmanned drones to perform similar deliveries, could also face the same problem.

Then, there’s the issue of helium. The price of helium - normally generated as a byproduct of natural gas mining - has doubled in recent years, from $95 to $200 for a 500-baloon capacity tank. While you can find balloon vendors in almost every African city, creating a supply chain for a fleet of 30m wide balloons won’t be easy, or cheap.

In fact, California-based Airship Ventures, operators of the world’s largest passenger airship, the Zeppelin Eureka, which ferried passengers around Northern California, shut down last year after just four years in operation. The company cited a “world helium shortage” that increased the company’s operating costs and a long-term sponsor “had not materialised”

There may be more financial support for aid delivery than for luxury Zeppelin cruises over California’s wine country, but Solar Ship may still find themselves up against similar challenges.

With less than 20 days to go, they’ve raised barely $6,500. However, Godsall claims that they have investors willing to back the full $1m, if the campaign doesn’t succeed.

“Many people have been trying to bring back the airship,” says Godsall “but then the laws of physics kick in and these projects have a tough time finishing. When you’re defying gravity with something new, everything needs to be checked out and properly tested before you send it up.”

So why should they succeed where others have failed? Persistence, he says. “We build em’, fly em’, build em’ and fly em’, and now, we’ve nailed it.”

Matter of Life & Tech
1I hover dream: An end to roads
HyperDrive
2Will solar planes ever take off?
Code Red
3Battle of the blimps
HyperDrive
4Lighter-than-air craft rises
Around the BBC