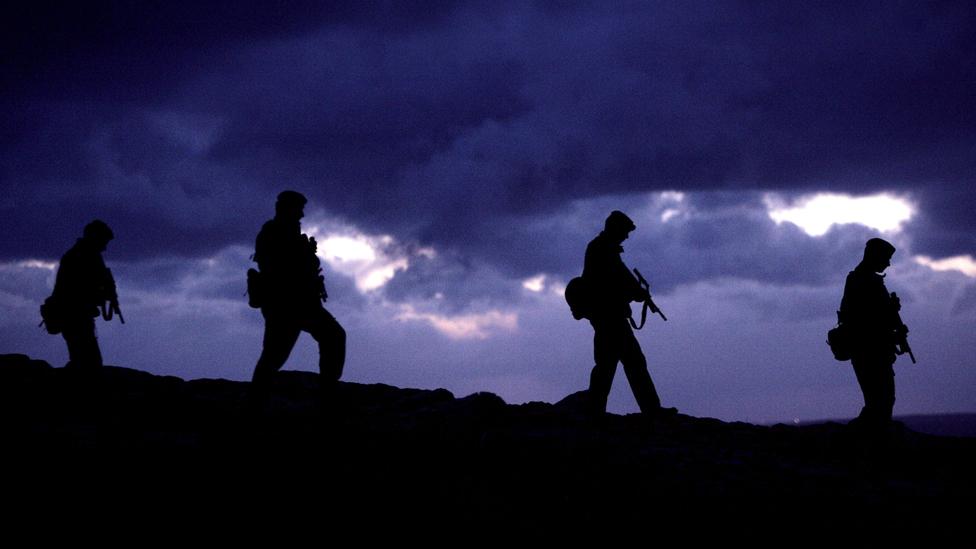 By Sharon Weinberger 21st January 2013
As well as tough exoskeletons that give soldiers super-strength, the US military is also developing lightweight suits that prevent regular injuries from everyday duties.
W

When the first Iron Man movie was released in 2008, defense companies rushed to capitalise on the sudden public interest in exoskeletons – armour-like suits that can provide superhuman powers – similar in theory to what Tony Stark wore.

If exoskeletons evoke images of super soldiers flinging cars, the reality could be equally as dramatic, hoped defence companies. “The exoskeleton is essentially a wearable robot that amplifies its wearer’s strength, endurance and agility,” says Raytheon, a US defence company that makes one version of a military exoskeleton, the XOS 2, that allows the wearer to easily lift 200 pounds (90kg).

While exoskeletons make for great headlines and fanciful hypothetical scenarios, the reality for now is more mundane. Iron Man may fly through the air, but the Raytheon exoskeleton is on a leash. Literally. Even the XOS 2 operates on a tether, which provides the electrical supply needed for the power-hungry system.

Interest in the exotic robotic suits, at least for the cash-strapped US military, may be waning. The Defense Advanced Research Projects Agency (Darpa) completed its exoskeleton program, and Raytheon no longer has government funding for its work. Lockheed Martin also has its own version of the exoskeleton, called the human universal load carrier (HULC), which has been receiving Army funding for research and development, but it’s not clear what the future of that work will be for a military that has little money to actually field exotic new technology.

So developing an expensive and energy-hungry super suit, though a nice idea, might not be the military’s top priority. Augmenting soldiers’ natural strength and protecting them from injuries is another matter: Darpa is now working on a new programme called Warrior Web, which is much closer in inspiration to Batman than Iron Man. Rather than relying on a hard, exterior robotic shell, the Warrior Web suit is described as being a “lightweight, conformal undersuit”, like a diver’s wetsuit.

The undersuit takes a different approach to enhancing soldiers: rather than creating “super soldiers” that can carry much more than a normal human, it focuses on helping troops do what they already do more efficiently and safely: carrying gear and supplies which can reach over 100 pounds (45kg). The idea is that the suit will fit comfortably underneath the uniform and outer protective gear to provide functional and adaptive support. Integrated components and sensors will help to prevent injuries and enhance the user’s natural abilities by supporting joints and reducing the amount of energy a soldier expends. Darpa is also looking at other “novel technologies that prevent, reduce, ambulate, and assist with healing of acute and chronic musculoskeletal injuries.”

This new focus hasn’t stopped other efforts to develop exoskeletons. The US Army’s Natick Soldier Systems Center in Massachusetts is still funding Lockheed’s HULC system and field tests of the armour suit are planned for later this year, according to David Audet, the team leader for the Soldier Mobility and Mission Enhancement Team. Audet sees research on exoskeleton and warrior web suits as being complementary efforts. “The area of personal augmentation is the umbrella effort,” he says. “We’re trying to augment the soldier, augment the marine, to be able to perform tasks that he does everyday, safer, more efficiently, and trying to reduce the energy in those tasks and reduce that number of injuries.”

In September of last year, Natick sponsored a demonstration of a number of such personal augmentation technologies. “We are looking to advance a couple of the technologies demonstrated at the event,” Audet said. “But nothing is firm.”

On the commercial side, Ekso Bionics, the California-based firm that licenses its technology to Lockheed, is already providing its robotic suit to hospitals for rehabilitation of patients suffering from paralysis. “Our goal is to get [the suits] out to the home,” says Russ Angold, the chief technology Officer of Ekso Bionics. “Instead of going to a rehab centre, they can do the rehab in their home.”

Eventually, the company wants patients to be able to use the suits for everyday use, but that requires reducing the size, cost and complexity. “We think of our exoskeletons like the old suitcase cell phone,” says Angold. “As technology progresses, they’ll get smaller, lighter, more capable.”

One advantage that Ekso has is that the suit operates off battery power, so it doesn’t need to be tethered to a power source. Ekso designed its exoskeleton from the start as a low-power device, explains Angold: currently, its battery can power the suit for a couple of hours, but that number could go up if the company can take advantage of advances in the cell phone and laptop industry.

For any type of suit, the power supply is a key issue. The “Warrior Web” suit, according to Darpa, should not require “more than 100 Watts of electric power from the battery source.” For the exoskeleton, the energy challenge is greater. “Ironman got it right with the Arc reactor,” says Angold. “It really comes down to the power supply.” 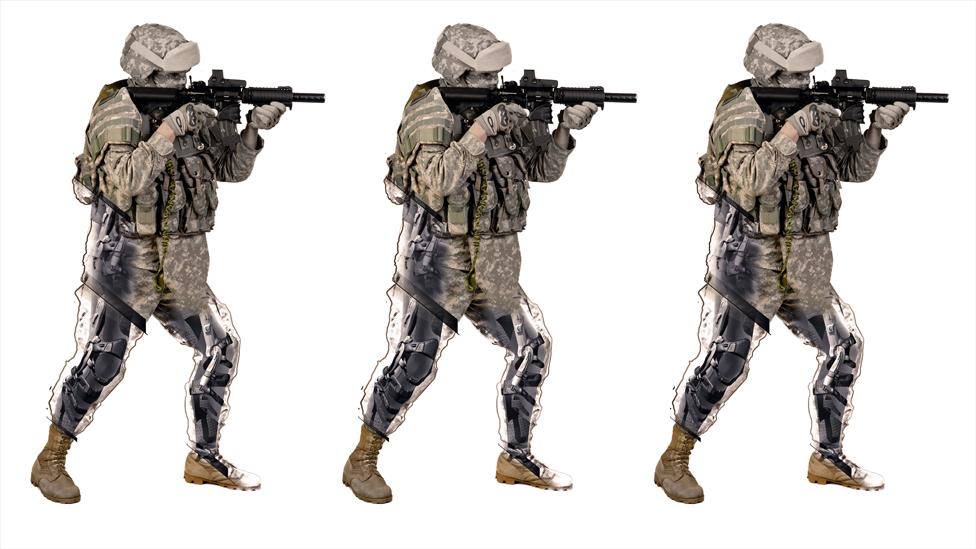 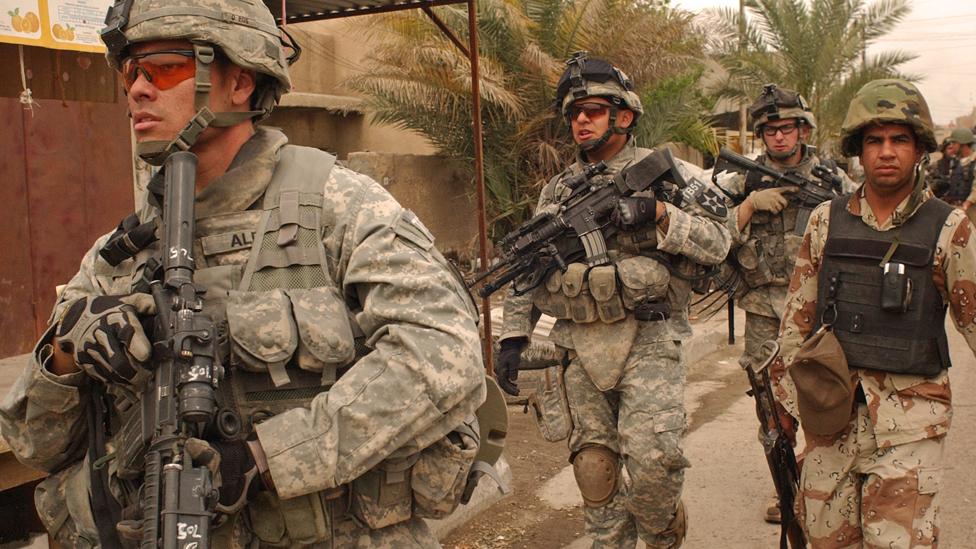 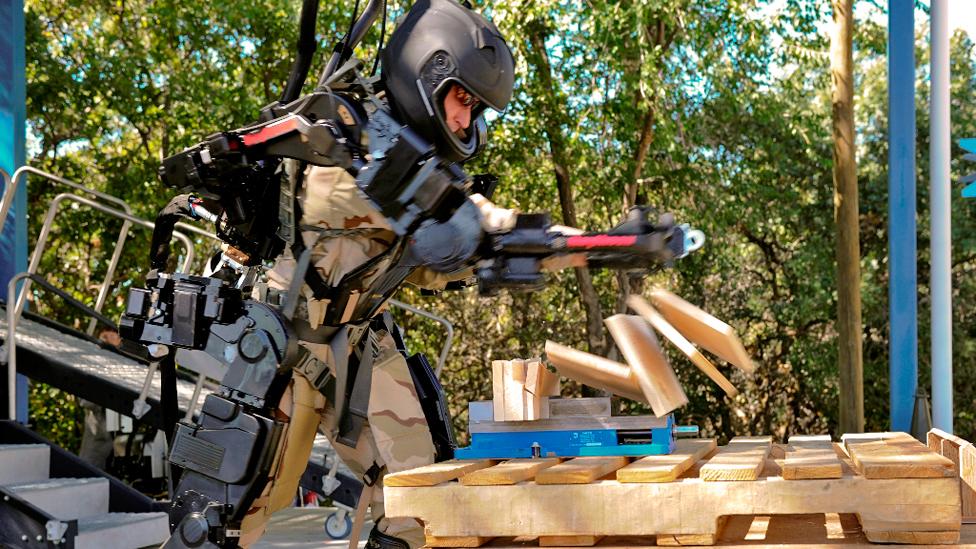 Warrior web is different from the tough exoskeletons being developed, like Raytheon’s XOS 2, which allow soldiers to carry heavy weights. (Copyright: Raytheon)

Warrior web is different from the tough exoskeletons being developed, like Raytheon’s XOS 2, which allow soldiers to carry heavy weights. (Copyright: Raytheon) 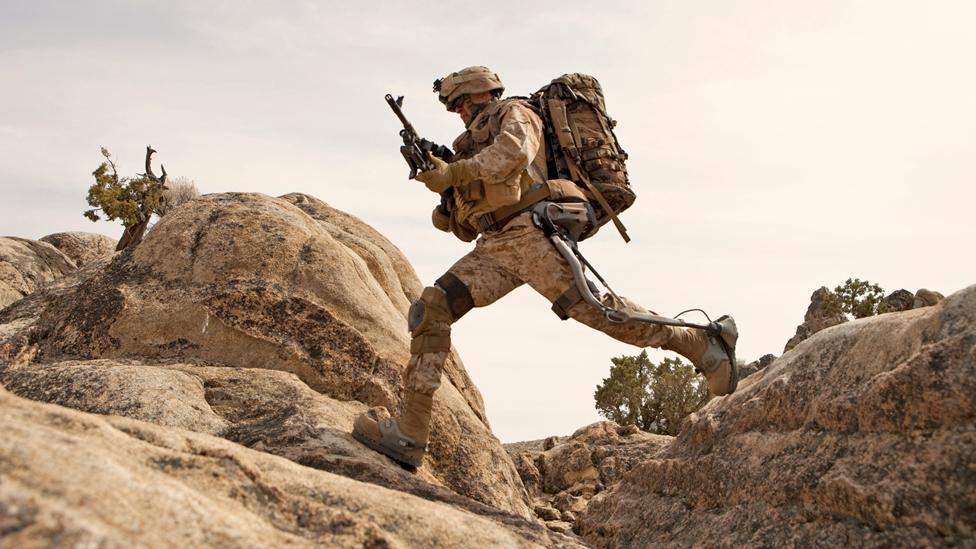 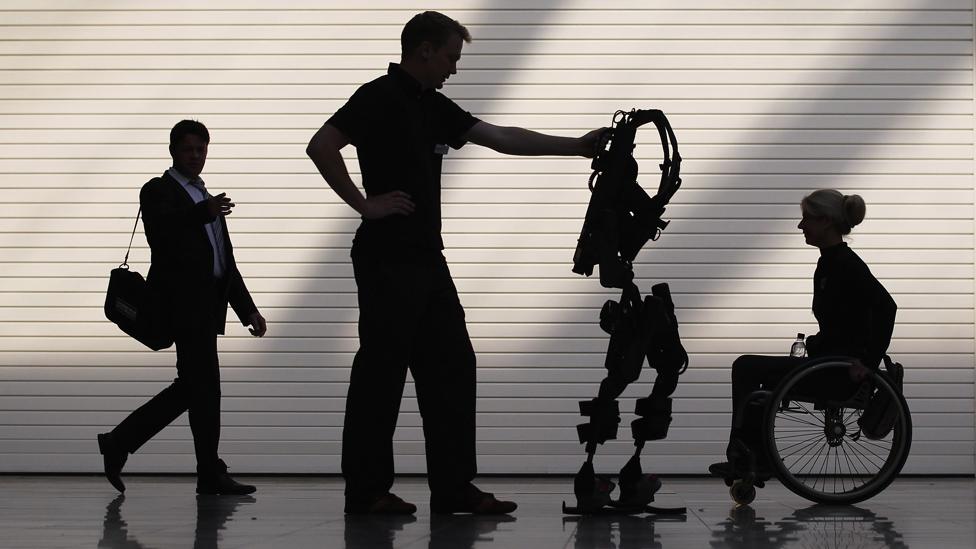 The robotic suit developed by Ekso Bionics is now being used by hospitals to help patients suffering from paralysis. (Copyright: Ekso Bionics)

The robotic suit developed by Ekso Bionics is now being used by hospitals to help patients suffering from paralysis. (Copyright: Ekso Bionics)

Horizons
1Helping the paralysed walk
TED Quotes
2A prosthetic arm that "feels"
Will We Ever?
3Will we ever... restore sight?
Code Red
4Mind control moves into battle
Around the BBC