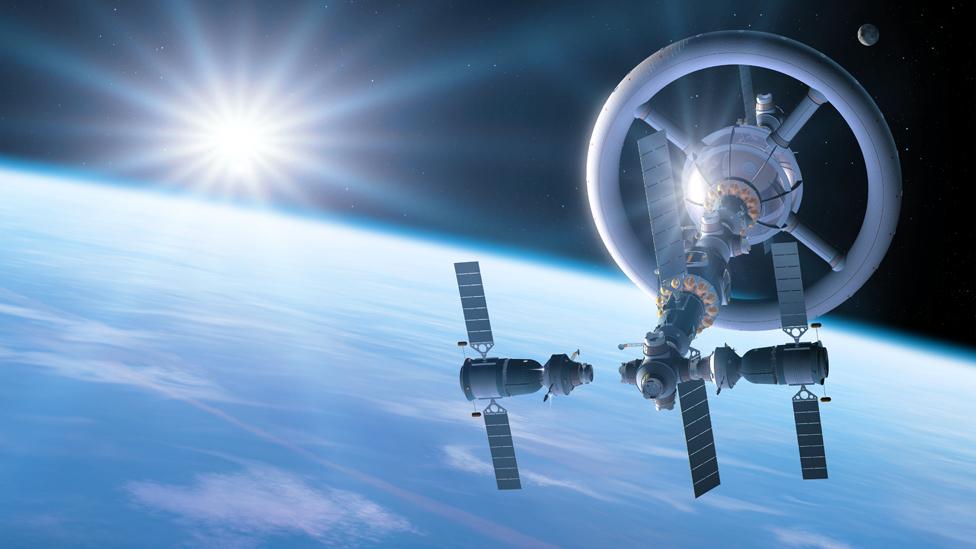 By Richard Hollingham 18th November 2014
Giant, spinning space-stations that generate their own artificial gravity have been envisaged for decades. So, why has no one built one?
L

Living in space is bad for you.

Any astronaut returning to Earth from the International Space Station (ISS) does their best to smile for the cameras but struggles to stand. So, imagine what it will be like for future missions to Mars. After several months cooped up in zero (or micro) gravity, the first astronauts to step onto the Martian surface will barely be able to manage an ungainly stagger, let alone a giant leap.

“There’s a variety of different effects that can happen,” says Nasa biologist Sharmila Bhattacharya. “There’s a reduction in bone density, there’s loss of muscle and vision can be affected.” Her recent studies suggest that spaceflight even compromises the immune system.

Add in difficulties with balance, sleep deprivation, a slowing of the cardiovascular system, not to mention excess flatulence; throw in a bit of space sickness, vertigo and lethargy, and you begin to understand the scale of the problem. Bhattacharya’s experiments, along with countless others carried out over more than fifty years, attribute most of these symptoms to the effects of living without gravity.

It seems humans have not evolved for life in space.

As a result, there are several ongoing initiatives to try to understand - and minimise - the impact of weightlessness. The European Space Agency, for instance, recently ran a series of bed rest studies, examining the effects on volunteers of 21 days of inactivity. And a forthcoming year-long joint Nasa/Russian mission to the International Space Station (ISS), is designed to put the latest theories on combating weightlessness, such as improved exercise and nutritional regimes, to the test.

However, if mankind is to travel to Mars, the moons of Jupiter, Saturn or beyond, we may need more extreme solutions. And one of those includes resurrecting plans all but abandoned by Nasa in the 1970s: spacecraft with their own artificial gravity.

Early designs for space stations all assumed that artificial gravity – generated by enormous spinning wheels - would be the norm in the future. Take an example from the 1949 issue of the Journal of the British Interplanetary Society written by H E Ross, which envisages a “refuelling station” on the way to the Moon. The design consists of three sections, rather quaintly labelled, “a bowl, bun and arm.”

The bowl is effectively a giant mirror, designed to concentrate sunlight that heats water to produce steam for power generation. That’s right, a steam powered space station. The bun – which looks more like a bagel – is located behind the mirror. The arm pokes out on the side of the bun and is linked to a docking port.

With any rotating wheel in space, the artificial gravity, or as Ross more accurately puts it “the pseudo gravitational effect”, works like this: thrusters rotate the bun/bagel around its axis, generating a centripetal force. Anyone inside this hollow wheel experiences a similar effect to gravity, as if they were being pulled towards the outer curved hull (although actually it is the floor of the hull pushing up against them). The amount of artificial gravity generated depends on the size of the wheel and the speed of rotation. The bigger the wheel and the faster it turns, the greater the effect. The result is brilliantly illustrated in the film 2001, where the astronaut jogs around the inside of the spaceship.

Towards the end of the Apollo Moon programme, in the late 1960s, Nasa commissioned studies from industry on future space stations. All the designs specified that artificial gravity would be essential.

“These old space station studies now look completely archaic,” says David Baker, editor of Spaceflight magazine and a former Nasa engineer who worked on the concepts. “The Skylab missions [of the mid 1970s] proved that the whole point of having a space station was to do microgravity research, so we abandoned the artificial gravity idea.”

“Now, though,” he says, “they might be worth revisiting.”

I find Baker’s 1971 reports on the project tucked away on a top shelf of the British Interplanetary Society Library in London. One, the McDonnell-Douglas “space base”, is formed of a series of cylindrical modules. The base includes a separate artificial gravity section, providing crew with around half the gravity they would experience on Earth.

A competing design, from North American Rockwell, is more ambitious and features a central core with four cylinders projecting from it on spokes. Each of these modules contains the living and working areas and, just like Ross’ 1949 concept, would spin around the central axis to generate artificial gravity.

Although both these designs are enormous – housing between 12 and 50 “men” with individual cabins, tables, comfy chairs and even a sickbay – the basic ideas are sound. In fact, they are not dissimilar to a 2011 proposal known as the Nautilus-X, or Multi Mission Space Exploration Vehicle, put forward by a consortium from Nasa, academia and industry.

This $3.7bn spacecraft is designed for six people and looks similar to a flying space station – with large solar arrays and a series of interconnecting tubes. However, the major difference is that surrounding the centre of the ship is a larger hollow wheel. This wheel would be a bit like a bicycle inner tube, made of a series of rigid rings connected by soft-walled inflatable sections. It is similar in structure to a module that Nasa has just ordered from Bigelow aerospace, with the intention of fixing it to the ISS in 2015.

There is a good reason why the ship looks similar to the ISS, according to Mark Holderman, one of the team behind the design. “Nautilus-X was to be assembled in orbit… [using] the skill and lessons learned from assembling the International Space Station.”

The ship’s design emerged in2011 from the Space Shuttle program's Technology Applications & Assessment Team (TAAT), a group formed to look at relatively near-term human space missions that could build upon or extend the use of existing technologies. The team envisaged building a prototype that attached to the ISS to prove the concept, before building a full-sized ship.

“It…would have been the first true spacecraft to provide a crew with artificial gravity,” says Holderman. “The Nautilus-X was also designed to provide the evolutionary basis for the spacecraft that would eventually take a crew of 9 to 12 to Mars.”

Ultimately, the project was cancelled due to changing priorities and a lack of funds at the space agency.

So with budgets only ever getting smaller, space agencies may want to follow a simpler – and cheaper – route. If that is the case, they could copy a method tried out on Nasa’s Gemini missions of the mid 1960s where astronauts stretched a tether between their capsule and an unmanned docking module and allowed the two bodies to spin around each other. The theory is the same as twirling a bucket around on the end of a string where a centripetal force is generated in the bucket.

Or for space agencies on a very tight budget, there may be an even cheaper option. Researchers at MIT, for example, have conducted a series of experiments using a small centrifuge – effectively a spinning table or chair. The idea is to fly something similar on the ISS, with astronauts strapping themselves to the device and spinning themselves round and round to simulate gravity. Although the setup has a habit of giving people motion sickness (particularly when they move their head), the experiments suggest that regular sessions on the wheel can offset some of the deleterious effects of weightlessness.

But a spinning table is hardly a giant wheel in space. Fortunately, for anyone harbouring dreams of that elegant ship in 2001: A Space Odyssey, all is not lost. Baker believes there may be another way to build the first artificial gravity spacecraft. “A hotel in space would definitely need artificial gravity,” he says. “Given that 50% of people get space sickness, if we have hotels in Earth orbit then artificial gravity would be essential.”

With the explosion in commercial space travel, this idea may not be as farfetched as it seemed even a decade ago. Indeed, the firm that is supplying Nasa with its first inflatable space station module is owned by hotel magnate Robert Bigelow, who has talked about his desire to extend his real estate empire into orbit.

So, perhaps one day, we could end up with giant inflatable, wheel-shaped space stations – albeit for millionaire space tourists rather than Martian explorers.

Space Station
1Space elevators: Going up?
Under the Radar
2Written in the stars
Space Station
3Space: A travel guide
In Depth
4Seven steps to another giant leap
Around the BBC