In the first of a five-part series on the future of mobile, Roland Pease explores the invisible problem that could stop the future before it has begun.

In April 1973, Marty Cooper made a phone call that put him straight into the history books. As he strolled down Lexington Avenue, New York, the Motorola executive (CK) whipped out an enormous prototype handset that he had built and placed the first public, mobile phone call.

The brief chat – and the photograph that immortalised the moment – marks the start of the mobile phone era. But Cooper’s legacy extends far beyond just that first conversation.

Along with a host of inventions, the engineer also formulated – and lent his name to – a mathematical law that captures the inexorable progress of our communications. Cooper’s Law, as it is known, shows how our use of the ether has grown since Guglielmo Marconi first transmitted radio waves 2.4 kilometres across the streets of Bologna – eight decades ahead of Cooper’s own historic transmission.

It has been estimated that the technology available when Marconi made his first transatlantic transmission, radio techniques were able to support just 50 simultaneous conversations worldwide. Since then radio capacity has grown by a factor of a trillion – doubling every two-and-a-half years. That’s Cooper’s law.

As well as describing progress, the law also become the mobile industry’s ruthless master: providing an aggressive roadmap for the rise of mobile culture.

The industry met this challenge thanks to advances in technology.

But now the game has changed. Although few in the industry acknowledge it publically, Coopers Law, which has stood for more than a century, is broken. And it is all down to the phone in your pocket.

Bin there, sent that

To understand the scale of the problem, you only need to look at the numbers.

For example, the mobile giant Ericsson has been tracking the growth in mobile traffic for years. But 2009 was a landmark year, according to the firm’s Patrik Cerwall: “That year saw more data traffic than voice traffic over the mobile networks”. And the data traffic has been doubling every year since – far outracing Cooper’s law.

The big accelerator was the smartphone, which suddenly made the data-carrying capacity of 3G networks attractive. “People didn’t really understand the benefit of 3G until the app concept changed everything,” Cerwall elaborates.

Data-hungry video is also driving demand. Networking firm Cisco has just reported video downloads last year crossed the 50% threshold, accounting for half of all data transferred over the mobile networks.

At the moment, there are around 1.1 billion smart phones across the world; by 2018 (the horizon for the Ericsson forecasts) that will treble to 3.3 billion. If you think that in 2012, smartphones represented only 18% of total global handsets, but represented 92% of total global traffic, you begin to see the problem.

And the growth will continue relentlessly, according to the Cisco analysis. In 2012, for example, global mobile data traffic grew 70% from 2011, to 885 petabytes per month – that is 885 million gigabytes of data. And in the next five years, it is expected to increase 13-fold, eventually reaching 11.2 exabytes (11, 200 million gigabytes) per month by 2017, according to Cisco.

These dramatic hikes will in part be driven by more people switching to smartphones, particularly in emerging markets, as well as new features on phones and in apps.

The impact of simple changes in an app was dramatically demonstrated in November 2012 when Facebook released new version of its mobile app for Android and Apple phones. Prior to the release, according to networking firm Alactel, the social network already accounted for 10% of the signalling and 15% of the airtime load on 2G/3G networks, respectively. But, as users around the world updated and started to use this new version, the firm noticed a dramatic increase of almost 60% in the signalling load and 25% in the airtime consumed by new features in the app.

However, data hikes will not just be driven by consumers. Firms also predict a rise in so-called machine-to-machine (M2M) communication, that will connect the mobile networks to an array of inanimate objects – from bins that will signal when they are full to electricity meters that will constantly call in to the utility company.

By the end of this year, Cisco predicts that the number of mobile-connected devices will exceed the number of people on earth, and by 2017 there will be more than 10 billion.

No wonder the chairman of the US Federal Communications Commission recently declared: "The clock is ticking on our mobile future.

The illusion is that the airwaves, like the atmosphere they pass through, are effectively limitless. We can’t see them, they can travel in any direction and link any two points – why should they be limited? Yet, in practice they are as hemmed in as a motorway through a city.

Radio spectrum is a limited resource, strictly farmed out by national and international regulation. At the moment it is all spoken for by the military, mariners, aviation, broadcasters and many more – all the way up to the very extreme of useful frequencies at 300 gigahertz.

No-one can get more bandwidth without someone else losing out. The 4G spectrum auction that recently began in the UK, for example, is the equivalent of adding a new six-lane motorway to the existing wireless infrastructure (itself already running at 10-lanes), built on virtual land vacated by old-fashion TV broadcasts.

It helps, but will only keep the expansion going for a certain time. Which is why mobile operators, and their rivals, are gearing up for major spectrum negotiations at the International Telecommunications Union in 2015. The so-called WRC-2015 conference aims to carve up the available spectrum amongst different competing uses. But an overriding priority is identifying and allocating additional frequencies to mobile services.

Already, the stakeholders are preparing their positions. Ericsson's Afif Osseiran, project coordinator for the European consortium Metis, says the ITU conference “will be a crucial moment for laying out the spectrum needs for the 2020s.”

But industry will not just rely on these delicate negotiations to secure its future. Much of the advance in the past 20 years has not been about how many of these wireless “lanes” we have, but how efficiently we use them.

Like a newly built motorway that’s used by just a few cars, the first generation of phones were incredibly wasteful of the spectrum they used. Capacity was wasted in the same way as the gaps between vehicles represented lost transport opportunities.

In going from 1G to 2G, there was a 1,000-fold increase in capacity, mostly not because of the new radio lanes added in, but because more traffic was squeezed onto those lanes.

And in going from 2G to 3G, capacity rose another factor of 1,000: digital techniques managed to squeeze out yet more of the empty space.

But with the latest generation of tricks being rolled out in 4G (actually described as 3G Long Term Evolution by developers), the industry is running out of ways to improve the efficiency further.

These limits that determine how much information can be transmitted were established in the 1940s by the American engineer Claude Shannon. Although his employers, the Bell Labs of AT&T telephone, were interested primarily about the limitations of telephone wires, Shannon's equations can be used equally for radio transmissions.

And mobile experts generally accept that the limits to data flow revealed by Shannon’s formulae are close to being reached.

So how will the mobile industry meet this challenge and keep satisfy out appetite for data?

The industry is clearly optimistic. It already confidently speaks of 5G – a further generation of technology that will roll out as current ideas have run their course. What exactly they mean by 5G is poorly defined, but a host of tricks are being discussed that it’s hoped will keep past trends going well into the next decade.

Which is just as well, as the lure of being immersed in a seamless flow of data will only become more compelling, says Rich Howard, formerly head of wireless research at Bell Labs and now with Winlab at Rutgers University.

“Mature technology is invisible – and that’s the direction we’re heading,” he says.

Howard looks forward to a day when phones begin to make intelligent decisions by themselves.

“What you want is a digital assistant that, while you’re having a call with somebody, will be busy looking at options for actions relevant to that call and have them available,” he says. So, if you are talking about a train journey, the phone could begin to check your calendar, ticket prices and connections. By the time you hang up, it would be able to present you with a list of available options. “Everytime you start to say something, you turn around and it’s already done, the way you want it done.”

It is a vision that is a world away from Cooper’s first call forty years ago and one that is only going to add the coming data crunch.

How the industry plans to keep up and deliver this future will be explored in the next article in this series. 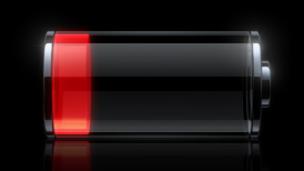 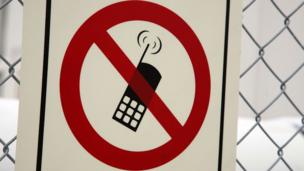 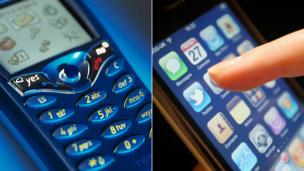 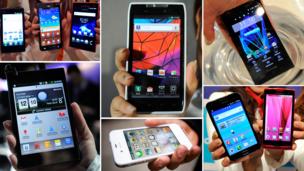 Why do phones all look the same?
Around the BBC