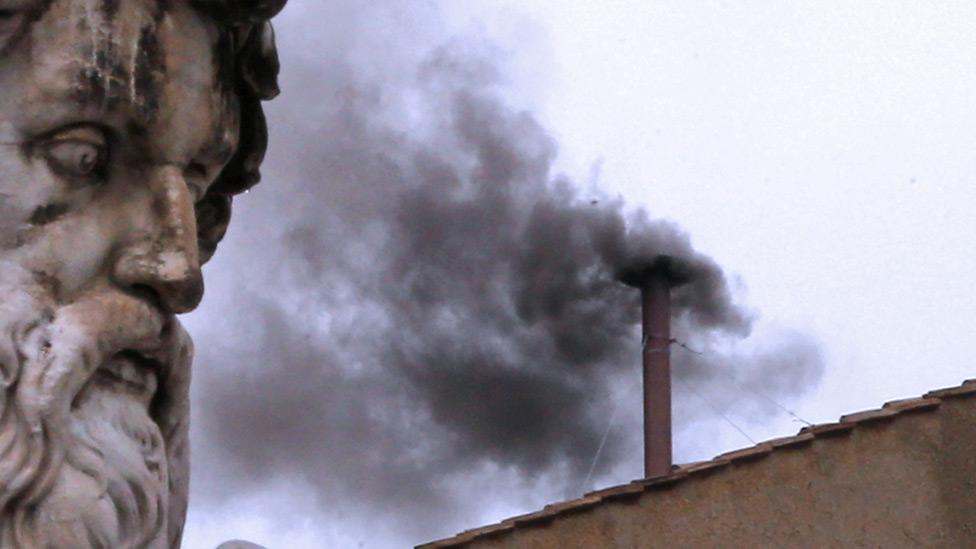 By Philip Ball 13th March 2013
How do they make it black or white? Look at the recipes used to signal the announcement of a new Pope, and you’ll find they are essentially making smoke bombs.
T

There’s something almost poignant in the way the Vatican has had to resort to chemistry to get its archaic method of communicating the papal election results to work properly: science helping to sustain a tradition from a distant age. Before this week, “fumata nera” and “fumata bianca” meant little to most people outside Italy. But now all eyes are on the copper chimney of the Sistine Chapel, from which the release of black smoke signals that the 115 cardinals voting to choose the new pope have not yet reached the two-thirds majority needed to secure a decision. When they do, the smoke will turn white.

The smoke comes partly from the burning of ballot papers in a special stove in the chapel. But to colour it white or black, this smoke is mixed with that from chemical additives burnt in a second stove. Traditionally the Vatican produced the different colours by burning wet straw for white and tarry pitch for black.

Anyone who has ever made a bonfire knows that damp grass will work for the former; the less responsible of you will know that chucking old tyres or roofing felt into the flames will turn the smoke black – and what’s more, noxious, because it is then full of sooty carbon particles that can clog the lungs and are potentially carcinogenic.

It’s not concern for the environment that has led the Vatican to change its ways, however. Rather, the smoke in some previous elections came out an ambiguous grey, prompting the decision for the last conclave in 2005 to use a more reliable method based on chemical ingredients.

The Vatican has now revealed what these are. For black, it uses a mixture of potassium perchlorate, anthracene and sulphur; white comes from potassium chlorate, lactose and the conifer resin called rosin, which is often rubbed on violin bows to increase friction.

We needn’t imagine a team of Vatican chemists labouring like alchemists to devise these magic recipes, because what they really show is that the Vatican is making plain old smoke bombs. A smoke bomb – as well as fireworks designed to be particularly smoky – works by combining an easily burnt, carbon-rich compound such as sugar with a so-called oxidizing agent, which provides the oxygen for the combustion reaction. Potassium perchlorate and chlorate (which differ only in precisely how much oxygen they contain) are the most common oxidizers in these applications. Anthracene, lactose (milk sugar) and rosin are the sources of carbon.

Anthracene, found in coal tar, is particularly good for producing big black sooty particles, although it is no longer used in pyrotechnic displays because it is carcinogenic. Sulphur also burns well, and was a traditional component of gunpowder: indeed, the Vatican’s "fumata nera" mix is basically that, with the traditional oxidizer of saltpetre replaced by potassium perchlorate.

White smoke for pyrotechnics is more commonly – and reliably – made by burning zinc dust with the organic solvent hexachloroethane and zinc oxide added. It is widely used for military training exercises. But the solvent is poisonous, and the smoke itself can cause liver damage and respiratory problems – so it’s no surprise that the Vatican chose a safer recipe.

In any event, the smoke system now leaves little to chance. Electrical heating of the flue, and backup air fans make sure that the smoke will come pumping out, and the process will surely have been tested to ensure that the black smoke doesn’t turn white as its big sooty flakes break up into smaller particles – an effect sometimes seen as bonfire smoke rises.

But perhaps the Vatican is missing a trick by being unimaginatively monotone. Why stop at a mere two-colour signalling system? The lurid rainbow smokes used in aerial displays like those of the Red Arrows are simply tinted with bright pigments and dyes such as indigo and rhodamine. Couldn’t we have beige smoke to denote a coffee break, amber to signal an impending decision, and burgundy to show that they're celebrating it afterwards?

Best of the Web
1Hacking the papal election
Science/Fiction
2Scientists: Band of misfits?
Science/Fiction
3Our endless apocalypse obsession
Will We Ever?
4Can we ever have safe cigarettes?
Around the BBC