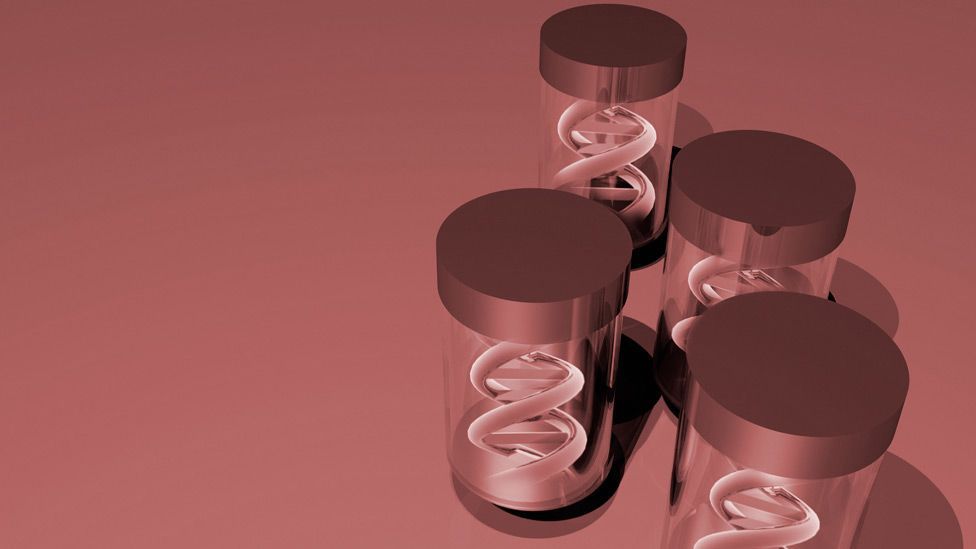 By Philip Ball 1st April 2013
Scientists have figured out how to trap DNA in microscopic shells, which could bring the idea of DNA as the ultimate data-storage medium a step closer to reality.
I

In many ways, DNA could be the ultimate data-storage medium. Ever since James Watson and Francis Crick showed almost 60 years ago to the day how DNA might act as the carrier of genetic information, its status as a molecular data bank has been growing. Once the artificial synthesis of DNA by chemical methods became routine in the 1970s, it became ever more possible to write any message into the double helix, encoded in the sequences of its four-letter alphabet. The prowess of these techniques was demonstrated last year when a team at Harvard Medical School wrote a 53,000-word book (plus 11 images – 5.27 megabits of data in all) into the structure of strands of DNA.

In principle, a gram of DNA could store almost 500 billion GB – as much as 100 billion DVDs. But there’s a drawback. Like most of the molecules in living organisms, DNA is rather delicate. Its chemical structure starts to break up if it encounters acids or bases, or high temperatures, or free radicals, or the DNA-munching enzymes that all organisms carry. You only need to look at fossils to see that: ancient DNA is as corroded as old ironware, its genetic messages often chopped up or scrambled. You wouldn’t want to entrust your family snapshots to this yet.

That chemical instability is a real drag, because of what DNA offers as an information store. There are several different proposals for making DNA computers that could not just hold but also process data, possibly finding solutions to difficult computational problems much faster than current silicon computers, because billions of molecules could conduct many searches for the best solution in parallel. And DNA tags could be used for a kind of barcoding that would be almost impossible to counterfeit, and which could label individual molecules, components of cells in biotechnology and medicine, and even entire organisms (such as valuable livestock). What’s more, single-stranded DNA tags can be attached to particles and structures too small to see so that they will assemble themselves, by pairing into double helices, in pre-ordained ways dictated by their ‘genetic’ sequence – a kind of smart dust, if you will.

All this could make a method of protecting DNA from falling apart extremely useful. And that is what chemists Robert Grass, Daniela Paunescu and Roland Fuhrer at the Swiss Federal Institute of Technology (ETH) in Zurich have devised. They have figured out how to trap double-helical DNA molecules inside what is effectively a tiny glass shell, which shields them from attack from other chemicals and protects them against heat and light.

The researchers first stick their DNA molecules onto the surface of spherical particles of silica (more or less the same as common glass) just 150 millionths of a millimetre (150 nanometres) across. They attach ammonium chemical groups to the surface of the silica particles, which have a positive electrical charge that attracts the negative charges of DNA molecules, making them stick.

Then Grass and colleagues coat these microscopic DNA-decorated beads with a very thin layer of silica again, which they grow by adding a compound called tetraethoxysilane (TEOS) to the solution. Over a period of four days, the TEOS molecules gradually stick together to form a web of silica just 10 nanometres thick, encapsulating the DNA-covered beads.

Once coated with this film, the DNA is safe from chemicals that would otherwise trash it in seconds. Like glass itself, the silica is untouched even by quite strong acids and alkalis, and will resist corrosive agents such as hydrogen peroxide (basically a type of bleach). Most of the protected DNA will also survive being heated to 140C in water, which will degrade nearly all unprotected strands, and is also sheltered from the damaging effects of direct sunlight.

Getting the DNA back out again appears to be rather easy, because the silica “bottle” can be dissolved with hydrofluoric acid – one of the few reagents that will attack silica glass, but won’t harm DNA when relatively dilute. The researchers checked that the DNA released this way not only retained the same information – the same sequence – but could also be copied using the standard laboratory method for DNA amplification, called the polymerase chain reaction (PCR).

The ETH team also showed that their DNA capsules can be mixed with polymers such as PVC to make little plastic disks that could be used to barcode consumer goods. The DNA was identifiable even after the disks were briefly heated to 200C, or were stored in a warm place (at 60C) for two months.

This isn’t the first attempt to protect DNA by encapsulating it in some kind of molecular-sized container – previous efforts have, for example, hidden the DNA in forms of silica laced with tiny pores. But such efforts have previously offered protection only against big, bulky aggressors such as DNA-digesting enzymes, not small molecules such as free radicals, nor against heat. And because this new approach uses only cheap, low-tech chemical methods, it could conceivably become a standard way for giving anything from SIM cards to cars their own unique ‘genetic’ label. The ETH team are already looking for commercial applications in secure labelling for brand protection. They are even considering personalized products – one day you might be able to buy jewellery containing your own DNA, or that of your loved ones encased in pearly glass beads.

Will We Ever?
1Will we ever… crack life’s code?
Under the Radar
2Killer material shrugs off bugs
Nature's Tricks
3Jab hope for 'resurrection' trick
Neurohacks
4Is politics really in our genes?
Around the BBC