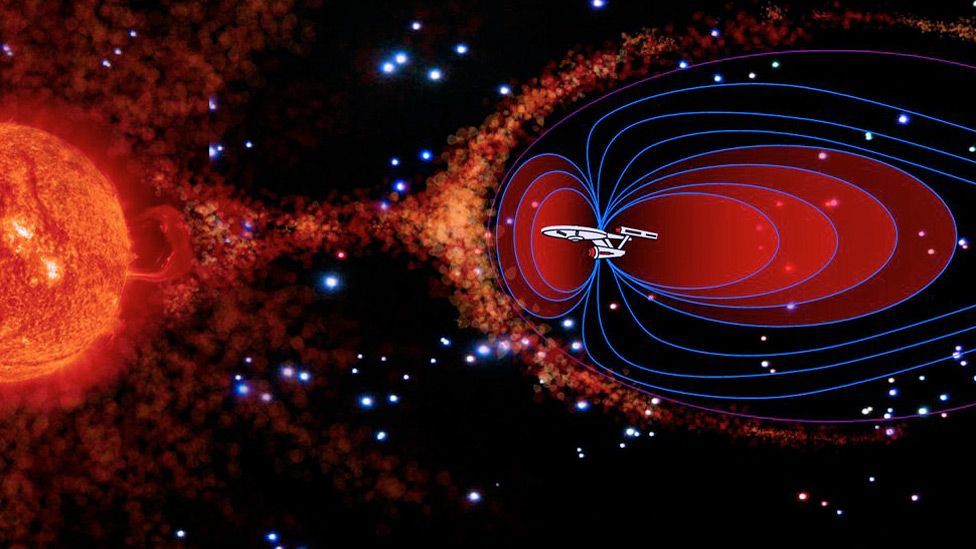 By Katia Moskvitch 24th April 2013
Scientists are trying to create a sci-fi spacecraft staple to protect astronauts from exposure to our Sun’s radiation on long missions. Can a solution be found on the Moon?
A

As any starship captain knows, should Klingons or Romulans ever attack your craft, the first thing you do is to raise the deflector shields. On Earth, scientists are busy trying to recreate this fictional concept, not to protect astronauts from aliens, but from a much more immediate and dangerous threat – streams of charged particles shooting out from our very own Sun.

Dealing with harmful radiation is becoming an ever-more relevant consideration. The renewed interest in human space exploration – with an application process already underway to select two astronauts for an ambitious Mars mission – demands efforts to ensure the safety of astronauts venturing far from Earth’s natural deflector shield, its magnetic field.

Here, below the protective magnetosphere, we are only exposed to UV radiation, which helps us tan, but also can cause skin cancer. On average, humans are hit by around 360 millirems of environmental radiation per year – the equivalent of five chest X-rays. Orbiting 350 kilometres (220 miles) above Earth’s surface the International Space Station (ISS) is still within the magnetosphere, but the planet’s magnetic cocoon is already threadbare, and astronauts are exposed to radiation that amounts to the equivalent of about eight chest X-rays a day. To protect them, crew quarters are lined with high-density polyethylene, several centimetres thick. This material is rich in hydrogen, and hydrogen atoms are great at absorbing and dispersing radiation.

Once you leave the magnetosphere, though, you’ll be in trouble, says Dr Ruth Bamford from the Rutherford Appleton Laboratory (RAL) Space in Oxfordshire, UK. On a several months-long mission to the Red Planet, for instance, the unpredictability of “space weather” poses a problem. If the Sun has a sudden solar flare, or a “coronal mass ejection”, space fills with streams of high-energy protons. For astronauts caught in these streams, it could mean instant death.

“Being in a solar storm is like standing in the beam of a particle accelerator,” says Bamford. “Highly energetic protons can easily penetrate the walls of a spacecraft, and are able to disrupt human DNA and molecular structures inside cells. They damage your cells so much that your organs become unviable, and you have no time to develop cancer, you fall apart in a few days. Vital systems shut down.” Even minor, non-fatal dosages result in short-term vomiting and diarrhoea, “which on a spacecraft are not a joke,” she adds. Polyethylene could offer protection, but only if it’s an extremely thick and heavy layer – and therefore may not be a viable solution for spaceships.

Nasa’s Apollo missions are the only ones that have sent humans beyond the Earth’s magnetic field – and as it turns out they were very lucky. Unlike Earth, the Moon doesn't have a magnetic field, and since its creation nearly 4.5 billion years ago its surface has been bombarded ruthlessly with high-energy particles. The Apollo 12 crew descended on the lunar surface only a few weeks after a major solar flare, which carried with it 100 rem of radiation. Between the Apollo 16 and Apollo 17 moonwalks, there was an even deadlier flare event – astronauts would have been killed, as the solar storm bathed the Moon’s surface in 7,000 rem of radiation.

But, despite the Moon’s lack of a magnetosphere, it may also hint at a protective solution. For decades, scientists were perplexed by bright white patches on the lunar surface, areas that did not seem to be affected much by space weather. These so-called lunar swirls look like spilled milk, and can be tens of kilometres across. Apollo missions and lunar surveys detected that these patches were slightly magnetic. But the magnetism was so weak – much weaker than the Earth’s magnetosphere – that scientists assumed highly charged protons could easily penetrate these shields.

However, Bamford and her team believe that the mini-magnetospheres can protect patches on the Moon’s surface from solar wind and solar flares. When the solar wind hits the weak magnetic bubbles, a much stronger electric field is generated. “Darker material is older, and these patches, which look like spilled milk, are whiter – so the material there is younger, less weathered, because it’s shielded from the solar bombardment,” says Bamford. The shield is not the magnetic field itself, but the resulting electric one.

To confirm the idea, the researchers tried to mimic the conditions on a much smaller scale in a plasma wind tunnel. A magnet the size of a coin was put in the path of a stream of protons. The magnet’s field interacted with the plasma in the tunnel and generated an electric field that made most of the incoming particles swerve around it – similar to raindrops deflected off an umbrella.

The finding was proof the researchers needed that the concept could be applied to a spacecraft. Using magnetic fields to protect spaceships is not a new idea – it was first suggested in the 1960s. The concept was abandoned, though, because scientists believed they would need to create a huge magnetic field, something that’s impossible to do on a rocket. But Bamford says that it is not the size of the magnetic “bubble” that matters, but the steepness of the magnetic rise. The actual shield can be much smaller if the gradient in the magnetic field is steep enough.

Now that the researchers have performed the initial lab tests and done elaborate computer simulations – about to be published in an upcoming paper – their next step will be a test on a much larger scale – around a real spacecraft – in space.

The scientists propose to place superconducting coils on the sides of a spacecraft. Once coils are cooled down to extremely low temperatures using liquid helium, and then charged up with a very high electrical current, they would generate a magnetic bubble-like field around the ship. Just as in the lab test, a solar storm’s plasma is expected to interact with the magnetic field and self-generate an electric field, says Professor Bob Bingham, another physicist at RAL Space. “I know it sounds very complicated, but we now have all the calculations and computer simulations to support our idea,” he adds.

The big question is how practical this system is. “It might work, but such shields have never really been tested [outside the lab], and it’s not a lightweight option,” says Stephen Bennington from Cella Energy, a UK-based spinout of the Rutherford Appleton Laboratory, which is developing an alternative shield using hydrogen-rich material that is lighter than polyethylene. “On a trip to Mars and back, you need to make sure you have enough helium and you can keep that helium cool. So you’ve got the weight of the coils, the weight of the helium, all the thermal insulation – and the bigger the spacecraft, the bigger your kit will have to be.”

The team at Cella Energy believe their hydrogen-rich material could make an effective shield for satellites because it absorbs high-energy radiation, and is less likely than current aluminium shields to emit protons and neutrons after radiation bombardment, which can disrupt electronic equipment. Nasa is currently looking into the idea, with the hope of testing a prototype on board the ISS.

Who knows whether we will achieve the dream of reaching the Moon again, or Mars. But we will still need to raise deflector shields even if human space transport is limited to the relatively more convenient destination of geostationary orbit. If this is the case, then astronauts may well be talking about different type of final frontier: magnetic shields and physical materials covering the walls of their spacecraft.

In Depth
1Space-based solar farms power up
In Depth
2Solar storm warning
In Depth
3Searching for a starship
Science & Environment
4How big is space?
Around the BBC