There’s less and less time to grab a meal nowadays. But is food on the run bad for your digestion? To find out, enter the world of the competitive speed eaters.

It seems there’s less and less time to enjoy lunch nowadays. There’s no such thing as the phrase “lunch hour”, even in France, where the traditional three-course meal is being replaced with sandwiches and fast food. If you are in a rush and you grab something quick, there’s a tendency to think that you must at least sit down to eat it, even if that means sitting on the bus while you go to your next appointment.  Otherwise surely you’ll get indigestion.

But is this true? When you look at the causes of indigestion or functional dyspepsia, as it’s called in the medical literature, eating standing up doesn’t feature on the list. When likely causes such as stomach ulcers and gastritis have been ruled out, the management of dyspepsia can include changes to lifestyle, but this means eating a healthy diet, giving up smoking and reducing alcohol and coffee consumption. It doesn’t mean sitting down when you eat.

In fact doctors even recommend the opposite, if the pain is caused by acid reflux, when acid from the stomach comes back up into the oesophagus. This is where gravity can help; remaining upright during and after eating can keep the acid down in the stomach where it belongs. For the same reason, patients with reflux are advised to tip the head of their bed up, so that they sleep on a slant.

But there could be another problem with standing up to eat. When we’re standing up we do things faster, hence the brief craze amongst “trendy” companies for installing bar-height tables for standing meetings after a study found that sitting meetings lasted 34% longer.  So perhaps the risk of standing to eat is the temptation to gobble your food down - the speed of eating leading to indigestion, rather than the position.

There are very few studies comparing fast and slow eaters, partly because it wouldn’t be easy to randomise people into eating at a particular speed and then to enforce that at every meal. A study from 1994 did include questions about eating speed in a survey of dietary habits. They found the speed at which you believed you ate had no relationship with the frequency of indigestion.  Research conducted in 2010 found the same, but these two studies rely on our ability both to judge our eating speed accurately, and to report it honestly.

This problem was overcome in a South Korean study, which timed how long a group of cadets training at the Armed Forces Nursing Academy actually took to finish their meals. With their regimented life where they all woke, ate and exercised at the same time, they were the ideal group of people to study. The one difference in their daily routines was the speed at which they chose to eat. But yet again, if you examine the study in detail, speed of eating seemed to have little effect on indigestion.

So how about the real masters of fast eating, the competitive speed-eaters? An American known as Furious Pete eats quickly for a living and holds four Guinness World Records, the most recent of which involved devouring a twelve inch pizza in 41.31 seconds.  Another record holder, this time from Japan, Takeru Kobayashi, can eat fifty-eight Bratwurst sausages in ten minutes. Surely that’s fast enough to give anyone indigestion, but apparently not.  Professor Marc Levine, a radiologist at Hospital of the University of Pennsylvania x-rayed the stomach of a speed-eating champion after eating 36 hot dogs in ten minutes. The participant was happy to continue after eating 36, but the decision was made to terminate the study for his own safety. He didn’t have indigestion, while the unlucky man who’d volunteered to act as a control, felt sick after seven hot dogs and had to stop.  The x-ray showed that the speed-eater had trained his stomach to expand to such an extent that he no longer felt full when he’d eaten.

And this brings us to what could be the problem with eating fast – it’s not indigestion, but the disruption of the usual mechanism that makes you feel full. But even here the evidence is inconsistent. Some studies found that eating fast leaves you feeling hungrier, causing you to eat more. Other studies have shown the opposite.

So next time you don’t have time to sit down for lunch, then don’t feel too bad if you think you are wolfing down your meal too fast. As long as it doesn’t make you feel ill at the time, there doesn’t seem to be any harm in it. 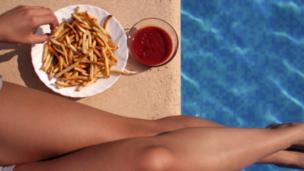 Can you swim just after eating? 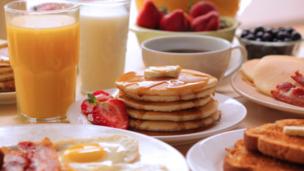 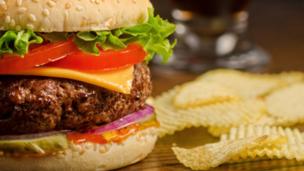 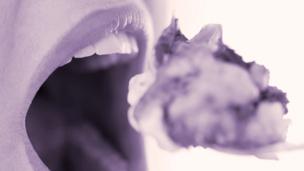 Why we want to feast on food
Around the BBC