Loading
Space Station | Space
What would happen if all satellites stopped working?
Share using EmailShare on TwitterShare on FacebookShare on Linkedin 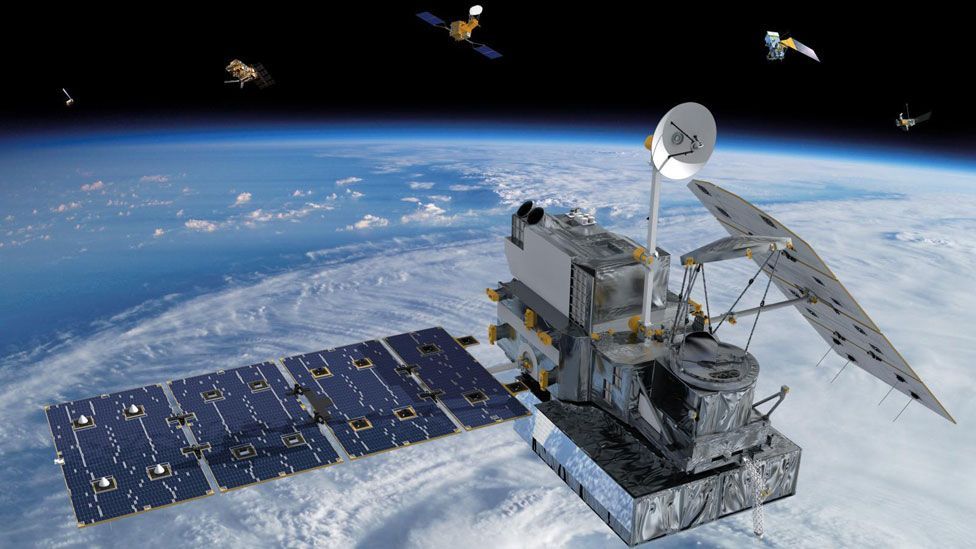 By Richard Hollingham 10th June 2013
We don’t always realise how much we depend on satellites orbiting our planet. Our space correspondent imagines the impact on the planet if we completely lost transmission.
W

We may not always realise it, but we depend on space technology orbiting the Earth. So what would happen if it all stopped working? At a recent international conference on “space hazards”, I listened to a series of speakers outline doomsday scenarios. These included a massive solar storm disrupting satellite communications, a cyber attack partially disabling the GPS system, and debris knocking out Earth-monitoring satellites.

Threats to this space infrastructure are real, and governments around the world are beginning to think seriously about improving the resilience of the systems we rely on. To focus their thoughts, and with a nod to that pioneer of threats from space, Orson Welles, here is what might happen if we suddenly encountered a day without satellites…

There was nothing sudden. Planes did not fall out of the sky, the lights didn’t go out or the water supplies fail. At least, not at first.

Some things did stop working straightaway but, for most people, they were more an inconvenience than anything else. The loss of television satellites meant that many families missed the cheery rehearsed smiles of breakfast TV presenters, and were forced to talk to each other over their cereal instead. There were no foreign correspondents on the radio, no results of the latest international sports fixtures.

But outside, the loss of global satellite communications was putting the world in danger. At a bunker somewhere in the United States, a pilot squadron lost contact with the armed drones they were flying over the Middle East. The failure of secure satellite communications systems left soldiers, ships and aircraft cut off from their commanders and vulnerable to attack. Without satellites, world leaders struggled to talk to each other to diffuse mounting global tensions.

Meanwhile, over the Atlantic, thousands of passengers watched movies, oblivious to the difficulties on the flight deck as pilots struggled to talk to air traffic control. Without satellite phones, container ships in the Arctic, fishermen in the China Sea and aid workers in the Sahara found themselves isolated from the rest of the world.

As people started work in their offices in Tokyo, Shanghai, Moscow, London and New York, they found it difficult to talk to colleagues in other countries. Email worked and the internet seemed okay, but many international phone calls failed. The rapid communications systems that tied the world together were unravelling. Rather than shrinking, it seemed as if the Earth was getting larger.

As presidents and prime ministers gathered their crisis teams, a new threat to global stability began to emerge: the loss of the Global Positioning System (GPS). As far as most of us were concerned, GPS helped us travel from A to B without getting hopelessly lost along the way. It had transformed the lives of delivery companies, helped emergency services reach incidents much quicker, allowed planes to land on isolated runways and enabled trucks, trains, ships and cars to be tracked and traced. But GPS turned out to be much more pervasive in our lives than many of us could possibly have realised.

GPS satellites are little more than highly accurate atomic clocks in space, transmitting a time signal back to Earth. Receivers on the ground – in your car or smartphone for instance – pick up these time signals from three or more satellites. By comparing the time signal from space with the time in the receiver – the receiver can calculate how far away the satellite is.

But there are plenty of other uses for these accurate time signals from space. Uses that, it emerged, our society had become increasingly reliant on. Our infrastructure is held together by time – from time stamps on complex financial transactions to the protocols that hold the internet together. When the packets of data passing between computers get out of sync, the system starts to break down. Without accurate time, every network controlled by computers is at risk. Which means almost everything.

When the GPS signals stopped, back-up systems (employing accurate clocks on the ground) kicked in. But, within a few hours, time had started to slip. A fraction of a second in Europe, compared to the US; a tiny difference between India and Australia. The cloud began to fail, web searches became slower, the internet started to grind to a halt. The first power cuts came later in the evening, as transmission networks struggled to balance demand. At computerised water treatment works, engineers switched to manual back-up systems. In major cities, traffic lights and railway signals defaulted to red, bringing transport to a standstill. Mobile phone services, already patchy, finally failed in the late afternoon.

By this time, aviation authorities reluctantly decided to ground commercial aircraft. The loss of satellite communications and GPS had already seen a majority of flights cancelled, but it was a more mundane failure that proved to be the final straw: the weather.

Although meteorological balloons, ground and ship observations were still important, forecasting had become increasingly reliable and reliant on satellites. Retailers used weather data to order the right foods – no point in stocking up on meats for the barbeque if the outlook was gloomy. Farmers relied on forecasts for planting, spraying and harvesting. The aviation industry needed forecasts to make decisions that would affect the lives of passengers.

Aircraft are fitted with radar to detect bad weather or other sources of turbulence, but they take note of constant updates from the ground. These “nowcasts” allow them to keep track of weather patterns developing and act accordingly. These are particularly important over the oceans, where observations from ships are sparse.

If passengers on trans-Atlantic flights had known this, then they would have thought twice before boarding. Without weather satellite data, a storm system developing rapidly over the ocean was missed and the aircraft flew straight into it. The severe turbulence experienced by passengers left several injured and the remainder badly traumatised by the experience. But at least they got to complete their journey. Around the world, other travellers were stranded thousands of miles from home.

By now, the full impact of what would become known as “the day without satellites” had become apparent. Communications, transport, power and computer systems had been severely disrupted. Global business had ground to a halt and governments were struggling to cope. Politicians were warned that food supply chains would soon break down. With fears of a breakdown in public order, governments introduced emergency measures.

If the disruption continued then each day would bring new challenges. There would be no more satellite data showing the health of crops, illegal logging in the Amazon or Arctic ice cover. Satellites used to produce images and maps for rescue workers responding to disasters would be missed, as would the satellites producing long-term records of climate. It was a tribute to the space industry that we could take all this for granted, but it was only when the satellites were lost that anyone noticed…

So, could all this happen? Only if everything failed at once, and that is unlikely. What is certain is that the infrastructure we all rely on has become increasingly dependent on space technology. And that without satellites, the world would be a very different place.

In Depth
1Danger: Space junk alert
Space Station
2Your personal satellite awaits
In Depth
3The greatest show on Earth
Technology
4Are phones safe to use on planes?
Around the BBC