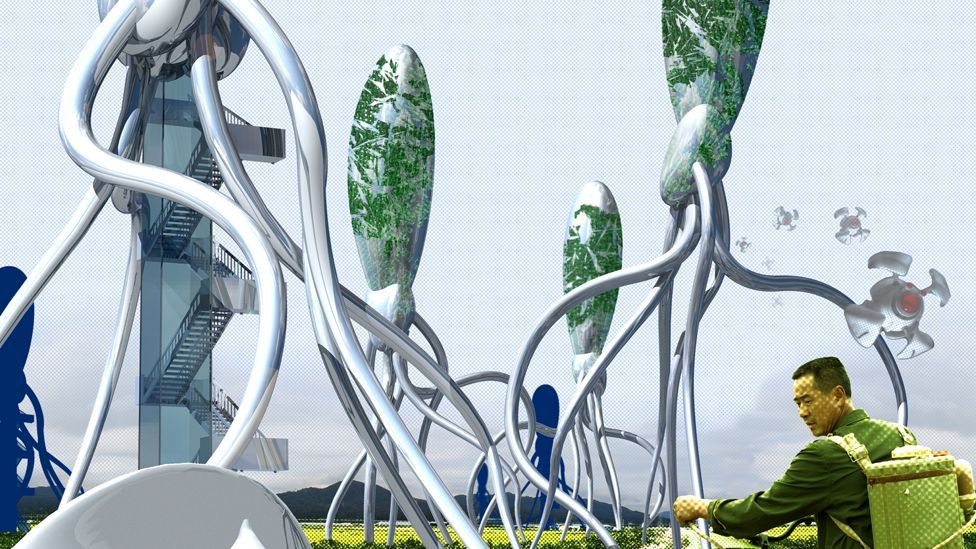 Our cities of smooth stone and steel may become more like floating forests – with buildings that can think and breathe and cool themselves, says architect Philip Beesley.
M

Mankind is rethinking how we build the structures we live and work in – and that, in turn, is changing the way our cities look and feel.

Using striking technical breakthroughs in complex computation and highly sensitive manufacturing, designers are moving closer to making lightweight buildings that can move, and perhaps even think and feel. Instead of hard, polished building faces, emerging prototypes from some of the world’s research centres suggest future cities might begin to resemble artificial floating forests.

Rather than a civic plaza made from polished stone, new public gathering spaces could be softly layered, their resilient woven fabrics arranged in multiple hovering skins. Instead of clear skies and open air, our atmosphere could be filled with lacy meshwork that filters air and renews the environment.

Technical crafts made possible by new research in thermodynamics are now presenting remarkable new opportunities for architectural designers to work with air, gas and fluids as building materials. Yale mechanical engineer Michelle Addington has vividly documented control systems for dynamic plumes of heating and cooling air that enclose building surfaces, and has demonstrated that similar convection patterns occur around human bodies. Addington’s vision implies that tangible air currents and gaseous concentrations of carbon dioxide and oxygen around the buildings we live and work in could become practical building materials for tomorrow’s architecture.

Similarly, new clothing by Amsterdam couture designer Iris Van Herpen elevates beyond the surface of the body and extends into surrounding space, extending tendrils and plumes and interacting with the layers of the air that surrounds us. Making these invisible currents visible, thermal cameras such as those first used by the Quebec filmmaker Philippe Baylaucq will soon be available to designers. Baylaucq’s cinematography suggests that the energy concentrating and dispersing around our bodies might become a tangible part of future public urban space.

In the hands of new researchers, these kinds of subtle energy exchanges might develop even further to become part of new artificial living systems. Exploring new chemical reactions within dynamic gaseous and fluid environments, British and Danish artificial life researchers such as Rachel Armstrong and Martin Hanczyc are designing "protocells" – a mix of chemicals which behave in a similar way to regular cells. They oscillate, move, and generate skins of delicate material that could one day be used to clothe a building that grows and renews its own coverings.

The emerging qualities in this experimental work could guide the practical design of new architecture. An expanded range of screens and canopies built with minutely balanced filtering layers could work with convective air and currents of heating and cooling air encircling a new urban architecture. Within this kind of city "fabric", the thermal plumes emitted by each human occupant offer a new form of energy to be captured and used to operate entirely ductless buildings.

Some of these technologies are already being implemented in emerging cities. Alexander Rieck is one of a group of visionary designers who have contributed to Masdar Eco City, a desert-surrounded oasis in Abu Dhabi where garden-filled laneways and rooftops have been designed to make the world’s first carbon-neutral city. A vast central cluster of opening and closing solar powered "sunflower" umbrellas capture the sun’s rays during the day and fold at night releasing stored heat in a continual cycle. By following the projection of the sun, continuous shade is provided to the main plaza of the city.

The American designer Mitchell Joachim of Terreform is working to engineer living tissues into viable buildings. Terreform’s plans for a vast site covering Brooklyn’s Navy Yard shows a densely interwoven fertile fabric of elevated walkways, plazas and buildings made from hybrid composite materials that include engineered animal tissues, living trees, and lightweight manufactured screens, all manicured like a fantastic topiary.

My own work on Near-Living Architecture group at Waterloo, Canada, has integrated densely massed microprocessor-controlled filters containing protocells within suspended canopy and wall surfaces. The structures contain circulation systems that work like lymph and blood in a building enclosure that could one day "breathe". In a prototype building system recently shown at London’s Building Centre Gallery, a floating canopy of laser-cut aluminum meshwork is fitted with dense masses of interconnected glass and polymer filters. The glasswork houses a carbon-capture system that works in much the same way that limestone is deposited by living marine environments. Within each cell of the suspended filter array, valves draw humid air through chemical chambers where chalk-like precipitate forms, an incremental process of carbon fixing.

When we think of designing complex forms of cities, how might particular shapes make a difference? If architects continue to follow the historic traditions that have guided North American and European building designs, we will continue to see trim, clean, stripped surfaces and dense, crystalline forms - pure cubes and rectangles adorned by an occasional sphere or dome as special centrepieces. These shapes evoke a language similar to that of ancient philosopher Plato, who described the world as coming from an inner core of pure geometric forms.

However, there are good reasons to pursue the opposite of these kinds of stripped forms. The shapes that are common within life-giving forests and jungles are the opposite of abstract cubes and spheres. The densely layered forms of a jungle are often made of diffusive, deeply interwoven material that expand and interact with their surroundings. A new city capable of handling unstable conditions – where it could shed heat, cool itself, and then rapidly warm up and gain heat again – might look like a forest. Each building could be made from dense layers of ivy-like filters and multiple overlapping layers of openings.

The experimental buildings illustrated here often tend to be characterised by delicacy. They increasingly move from older forms of a static, rigid world into the dynamic and sensitive qualities of a living metabolism. 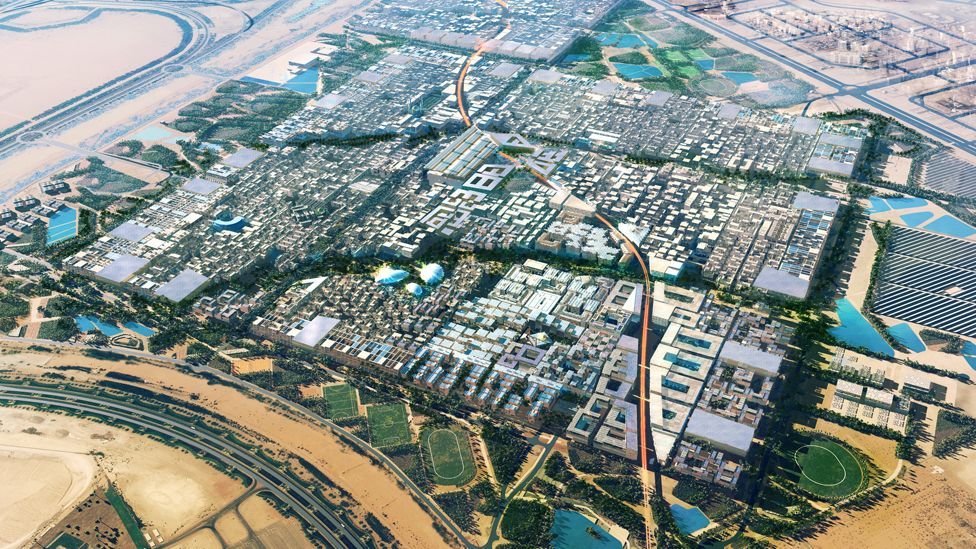 The ambitious Masdar City is intended to be energy-sufficient. The Abu Dhabi city will use solar energy and other renewables , and will be car-free. (Copyright: Masdar City)

The ambitious Masdar City is intended to be energy-sufficient. The Abu Dhabi city will use solar energy and other renewables , and will be car-free. (Copyright: Masdar City) 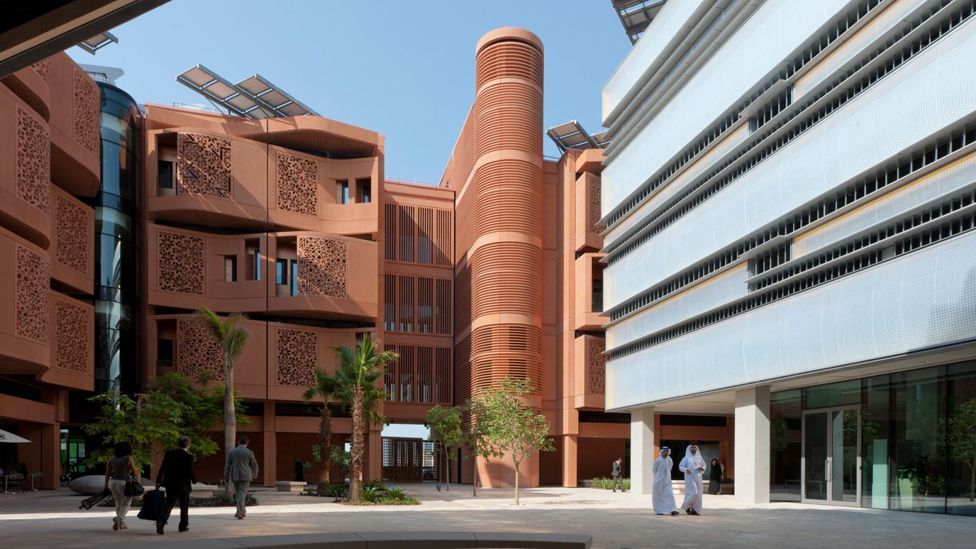 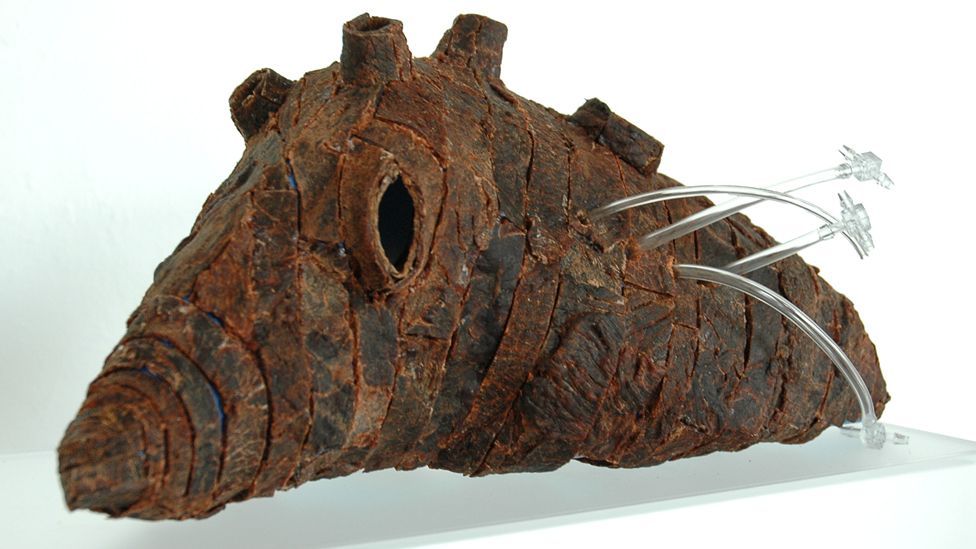 Terreform’s concept for a shelter is built from a range of materials – including lab-grown pig skin cells. The skin is merged with gums and plastics. (Copyright: Terreform)

Terreform’s concept for a shelter is built from a range of materials – including lab-grown pig skin cells. The skin is merged with gums and plastics. (Copyright: Terreform)

Vertical towers full of energy-creating algae, set up in public land, are another idea from New York’s Terreform. (Copyright: Terreform)

Vertical towers full of energy-creating algae, set up in public land, are another idea from New York’s Terreform. (Copyright: Terreform) 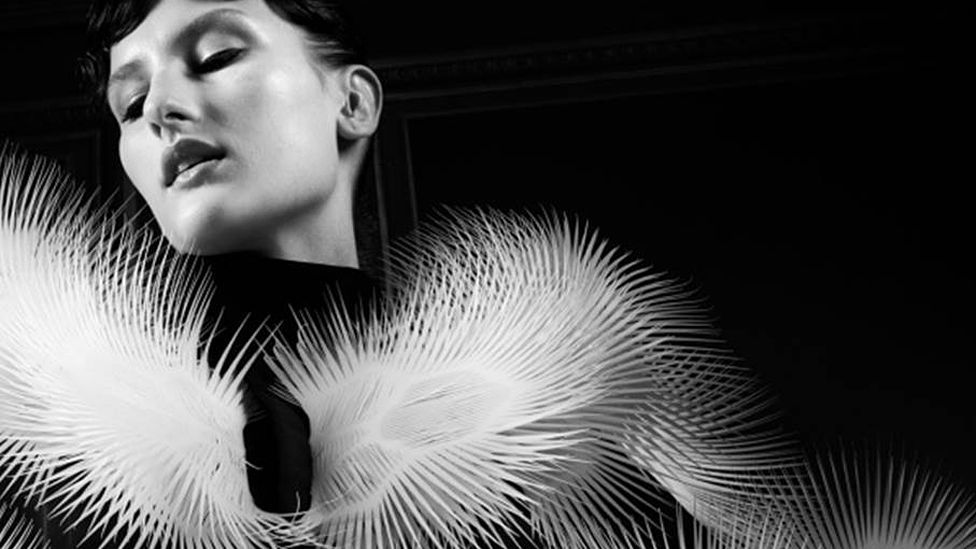 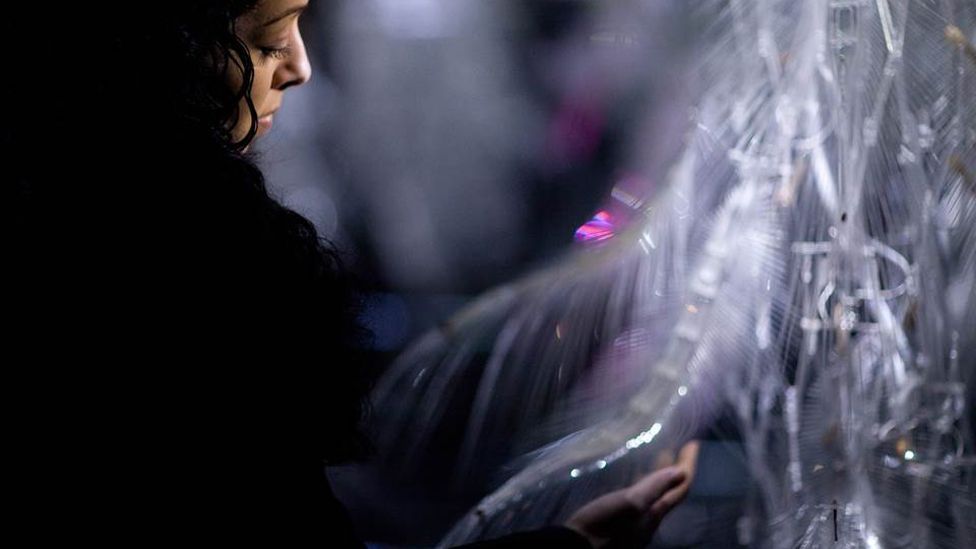 Another of Beesley’s projects is Hylozoic Series: Sybil, where LED lighting, sensors and shape-memorising alloys react to the humans moving around it. (Copyright: Philip Beesley)

Another of Beesley’s projects is Hylozoic Series: Sybil, where LED lighting, sensors and shape-memorising alloys react to the humans moving around it. (Copyright: Philip Beesley)