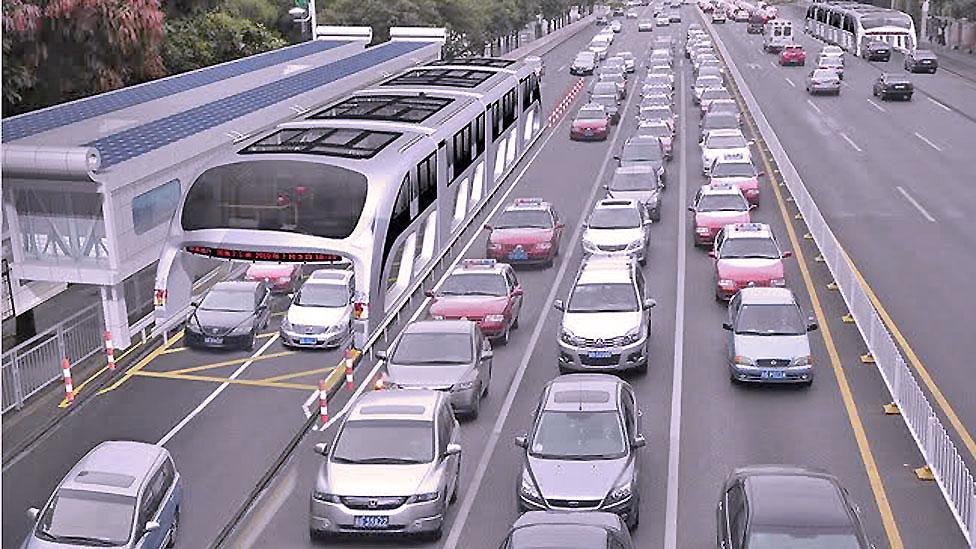 By Ryan Chin 18th June 2013
With global cities swelling and car use soaring, how will our existing transport systems cope? Ryan Chin at the MIT Media Lab looks at sustainable alternatives that we could see on the streets by 2050.
W

What is the future of urban mobility? By 2050 there could be 2.5bn cars roaming the planet and most of them will be concentrated in cities, the OECD has reported. Saudi Arabia, one of the world's top oil exporters, expects domestic consumption to exceed exports by that year purely to feed its internal needs for automotive fuel. Meanwhile, if Chinese levels of automobile ownership reach US levels (840 cars per 1,000 people), demand for oil in China alone will surpass present-day global oil production, management consultants McKinsey have reported. And climate scientists predict irreversible environmental damage with continued carbon emissions if we follow this "business as usual" attitude. But, we no longer need to rely on predictions to understand the magnitude of this future, we can simply need to visit Beijing to realise that, as science fiction author William Gibson said, "the future is already here – it's just not very evenly distributed".

Beijing, a city with more than 20 million people, typifies the type of rapid urban densification the world is experiencing, particularly in the developing world. Plans by the Chinese government, reported by the New York Times, call for the movement of 250 million rural farmers into cities over the next 12-15 years. This shift from an agrarian society to an urbanised one has caused the cities to swell to the point where daily commutes are up to two hours for every resident. In January of this year, the particulate matter (PM) levels in Beijing, a measure of air pollution, exceeded 2.5 million, similar to one of the US's worst wildfires. Nearly a quarter of these toxic fumes can be directly attributed to carbon emissions from transportation. Yet, despite these unbearable conditions the allure of the private automobile is still captivating, aspirational, and a symbol of status.

There are four remedies to combat this polluting chaos. One approach is the electrification of the automobile. Another is vehicle sharing. Third is the creation of self-drive vehicles. And the fourth is increased usage of low-energy transportation options like walking, bicycling, and use of mass transit. Each approach adopts different strategies for solving the problem.

Electric vehicles (EVs) are primarily an auto-centric, engineering approach to the problem, whereby automakers have substituted the internal combustion engine with battery powered electric motors. This dramatically increases the fuel economy of the vehicle and eliminates tailpipe emissions. The rise of Tesla Motors and their commitment to create luxury electric sports cars has created positive momentum for EVs. Now nearly every major automaker in the world has an EV in the production pipeline. The development of new Lithium-ion battery technologies with much higher energy and power density has also made EVs more competitive. Eventually, EVs will be designed specifically around new electric drivetrains such as in-wheel electric hub motors, which eliminate the need for transmissions and gearboxes, further improving both driving and environmental performance.

The world's largest car sharing program, Zipcar, based in Cambridge, near Boston, has taken a business-model approach, allowing users to rent vehicles by the hour. Users have the benefit of access to mobility whenever they need it, without the burdens of car ownership such as car depreciation, parking, insurance, tolls, and maintenance. This is only the start. In 2012, the Transportation Sustainability Research Center at UC Berkeley reported an estimated 1.7 million car-sharing members existed in 27 countries. Car sharing has obvious benefits to the city. Zipcar estimates every shared vehicle replaces up to 20 private automobiles, thus reducing total vehicle miles and land devoted to parking. Even carmakers – such as BMW, Daimler and Ford - are getting into the action with their own programmes.

Autonomous automobiles are no longer science fiction, thanks to the initial funding efforts by the US government's Defense Advanced Research Projects Agency (Darpa). Tests have shown that the concept will work on real-life roads. The Urban Challenge in 2007 shifted the focus of this research to the complexities of city driving. Six teams out of 11 semifinalists finished that race, therefore validating the technology. Since then, automakers such as GM, Audi, Toyota, and others have invested the concept. The Google Driverless Car has already logged 300,000 miles on California roads without a human driver. After lobbying by Google, the states of California, Nevada, and Florida now allow driverless cars.

The development of autonomous vehicles has other benefits too. Every year some 1.25 million people around the world die every year from automobile accidents. Autonomous vehicles can use car-to-car communication to avoid accidents and will always follow the road rules. Cars could be made out of lighter materials for collision-free environment to make them much more energy efficient. Autonomous vehicles can also closely follow each other, in platoon fashion, improving synchronisation with traffic signals to avoid stop and start delays. Estimates by some leading experts state that traffic flow could improve by as much as 40-50% just by using driverless technology. That means less idling at the traffic lights, and less pollution.

The increased use of low-energy transportation options such as bicycle sharing, bus rapid transit and traditional subways are providing city dwellers with more flexible, cheaper, and less polluting options. For instance, China will be building over 87 new mass transit rail lines of nearly 2,500km (1,550 miles) of length in the next five years alone. If construction continues on this pace, then China’s cities will have half of the world’s metro tracks by 2050. Some novel mass transit concepts have also emerged, such as on-demand buses developed by the University of Tokyo, which replace fixed-route bus lines, by dynamically routing pick-ups and drop-offs based on user demand. These systems improve operational efficiency and reduce carbon emissions by eliminating unnecessary stops. Another new concept that has yet-to-be-proven is the 3D Express Coach, an elevated bus, which straddles over two lanes and hovers over automobile traffic.

But simply replacing a fossil fuel-burning car with an electric one – even one that can safely and efficiently drive itself and collaborate with other vehicles – will not be enough unless we adopt new use and ownership models and fundamentally change urban settlement. Rapid transit offers a partial solution, but they also have limitations. Public transit systems like subways and buses are extremely effective in moving masses of people from fixed point to fixed point. But they do not solve the first and last mile problem. Users may live too far away from transit points to walk. This problem is compounded if users have much to carry, have a physical disability, or it is simply too hot, cold, or wet. The creation of an Autonomous Mobility-on-Demand (A-MoD) network may solve this problem. Modelled after bicycle-share programmes, users will have access to a network of Lightweight Electronic Vehicles (LEVs) distributed at charging stations throughout the city. The swipe of a smart phone allows them to pick-up an electric vehicle at a charging station and drop it off at any other station.

Users can combine modes by taking a shared-autonomous LEV for short distances then transferring to any mass transit mode, finishing their trip by cycling or walking a short distance. The A-MoD network would consist of a fleet of electric bicycles, scooters, and a range of electric vehicles. This essentially forms a new mobility network for short-distance, low-speed trips that enable users to customise every single trip by selecting the appropriate vehicle for each trip segment – whether that's to work or the local grocery store. More importantly, these intermodal systems are complementary to mass transit, therefore dramatically increasing involvement in low-pollution transport schemes.

Unlike bicycle share programmes that suffer from redistribution problems (such as too many bikes in some locations and none in others), the A-MoD system could simply deliver a vehicle to a user. Once the user is dropped off, the shared LEV will drive on its own to pick-up another user, or to park itself for recharging. A-MoD systems essentially act as driverless electric taxis. Experiments conducted by scientists at the Massachusetts Institute of Technology (MIT) at the campus of National University of Singapore, prove that autonomous pick-up and drop-off works, and the technology is economically scaleable.

A-MoD systems builds upon research conducted by the City Science Initiative at the MIT Media Lab on the CityCar, a foldable, electric, and shareable two-passenger vehicles designed for on-demand use. Again, this is not fantasy; the CityCar is on the verge of being commercially available in Europe by MIT industrial sponsors this year. The technologies to create smart sustainable cities have existed for a long time. Ferdinand Porsche developed the first hybrid vehicle to use electric motors in 1898. But in the end, technology and progressive public policy cannot do it alone, nor can new business models. It requires that we fundamentally re-think the urban structure of our cities, so that we don’t separate our living and working to the point that we need motorised transportation in the first place. It requires walkable, high-density, mixed-use neighbourhoods where the needs of every resident are met with less than a 20-minute walk.

If we don’t act quickly, all we need to do is visit China’s megacities to glimpse our future.

.In China, road users may share the tarmac with a bus which travels around them on special tracks, carrying passengers in a cabin above road traffic. (Copyright: Shenzen Hashi) 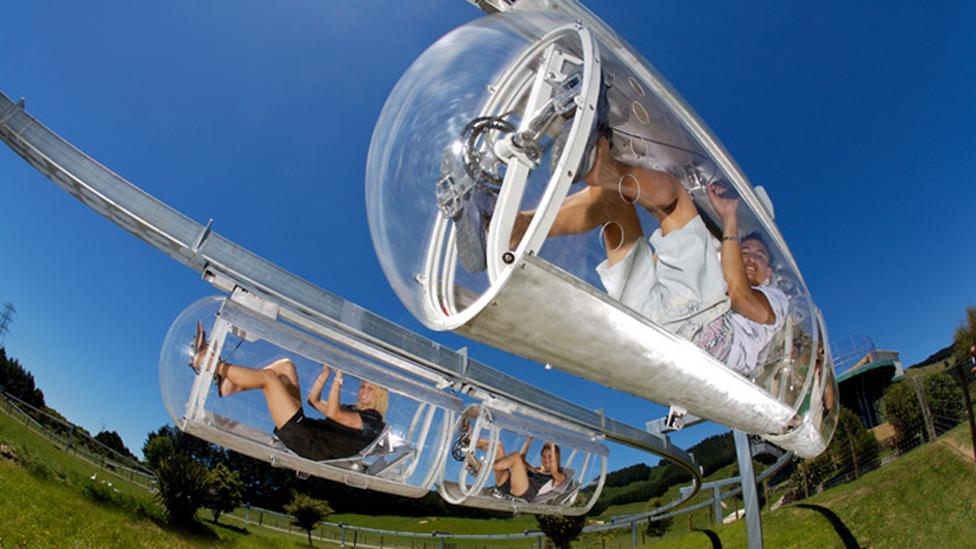 The Schweeb is a pedal-powered monorail being trialled at a New Zealand adventure park. The all-weather pods require little effort to get moving. (Copyright: Schweeb)

The Schweeb is a pedal-powered monorail being trialled at a New Zealand adventure park. The all-weather pods require little effort to get moving. (Copyright: Schweeb) 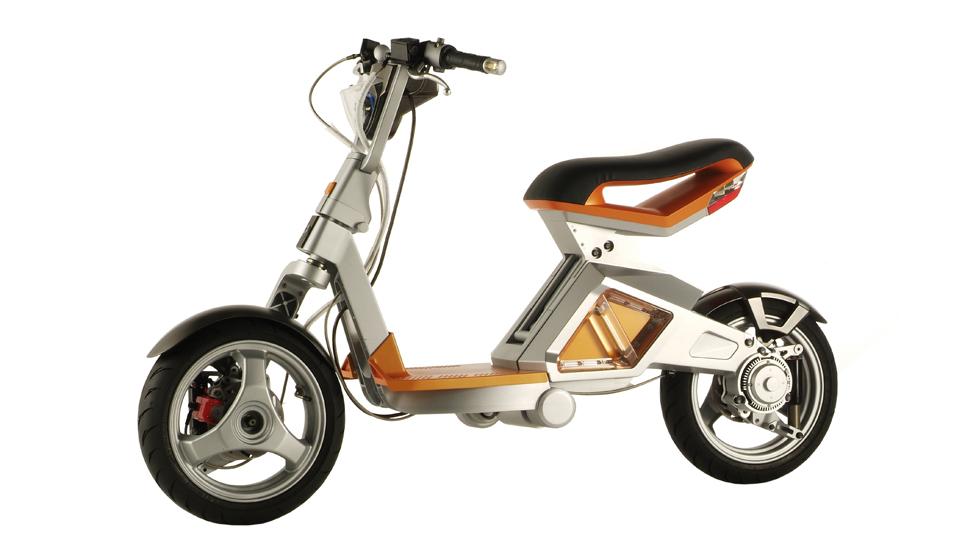 The Massachusetts Institute of Technology (MIT) has designed an electric scooter prototype which could replace petrol-burning scooters in cities of the future. (Copyright: MIT)

The Massachusetts Institute of Technology (MIT) has designed an electric scooter prototype which could replace petrol-burning scooters in cities of the future. (Copyright: MIT) 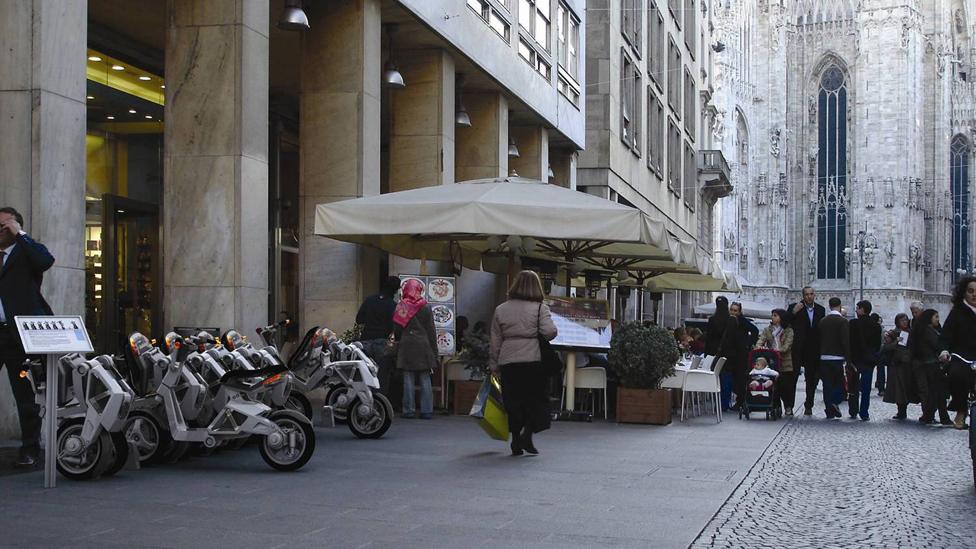 The scooter could be folded to take up less space when it is recharging on the street, an added bonus in dense urban areas where space is limited. (Copyright: MIT)

The scooter could be folded to take up less space when it is recharging on the street, an added bonus in dense urban areas where space is limited. (Copyright: MIT) 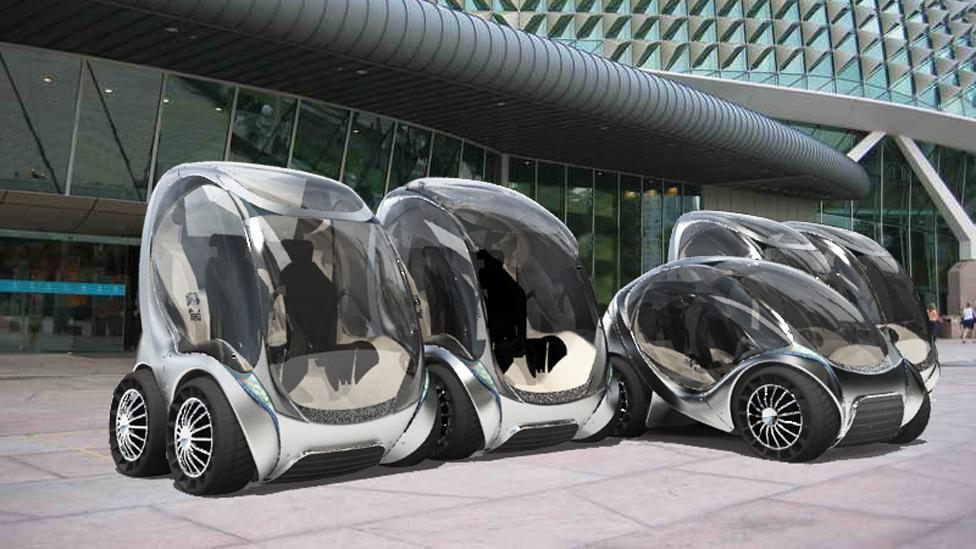 The CityCar is another foldable design from by MIT. The electric-powered car is designed for small streets and folds in on itself when parked. (Copyright: MIT Medialab)

The CityCar is another foldable design from by MIT. The electric-powered car is designed for small streets and folds in on itself when parked. (Copyright: MIT Medialab) 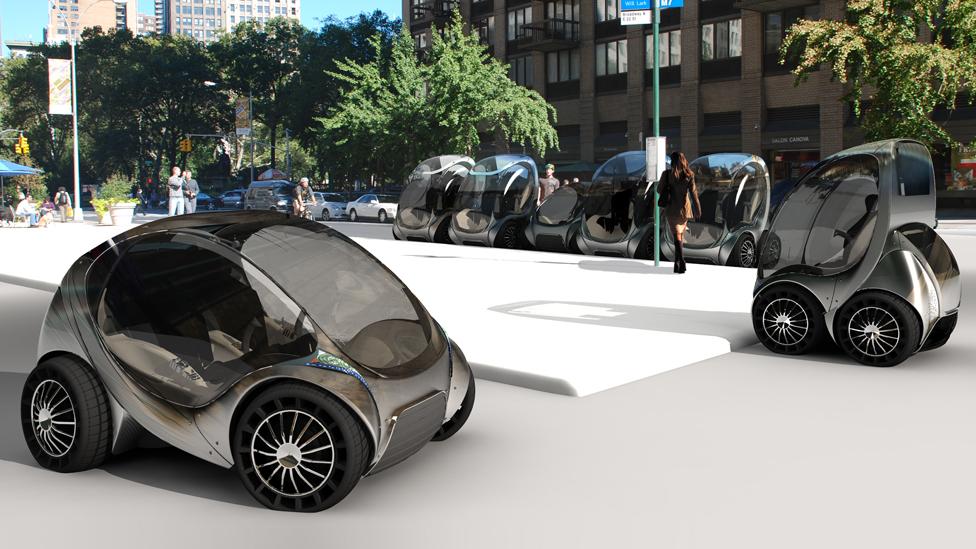 The car – only 60% the size of the Smartcar – has been built by a Spanish firm and will be put to the test in trials in Bilbao, Boston and Malmo. (Copyright: MIT Medialab)

The car – only 60% the size of the Smartcar – has been built by a Spanish firm and will be put to the test in trials in Bilbao, Boston and Malmo. (Copyright: MIT Medialab) 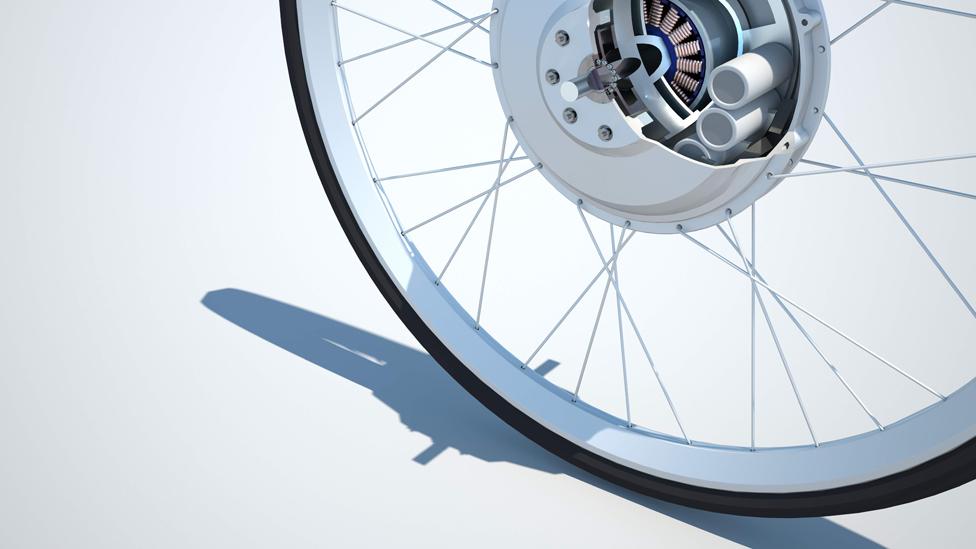 The Greenwheel turns any pedal-powered cycle into an electric one by fitting a special electric motor wheel. The bike is recharged through pedalling or the mains. (Copyright: MIT)

The Greenwheel turns any pedal-powered cycle into an electric one by fitting a special electric motor wheel. The bike is recharged through pedalling or the mains. (Copyright: MIT) 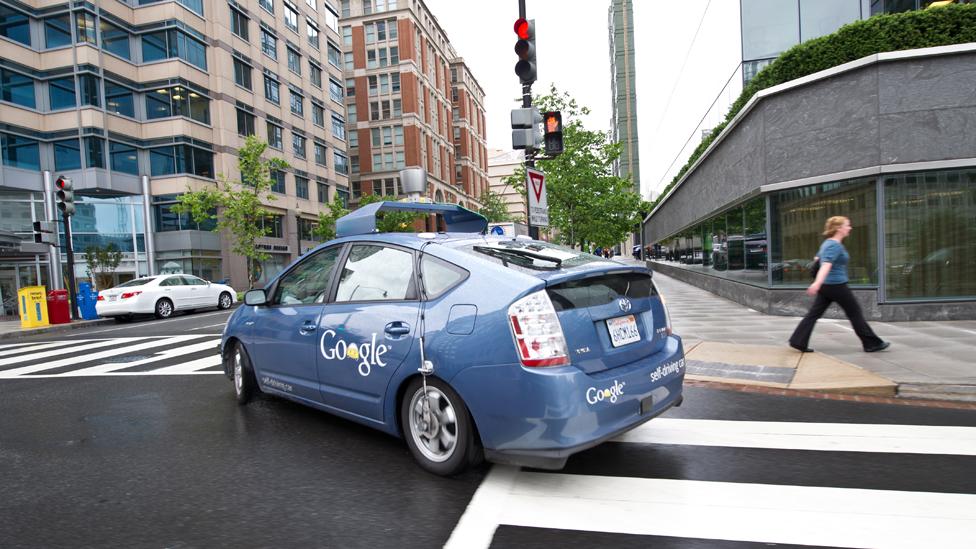 Google’s driverless car is a converted Toyota Prius. In US road-testing, it has driven without incident using on-board sensors to maintain safe distances. (Copyright: Getty Images)

Google’s driverless car is a converted Toyota Prius. In US road-testing, it has driven without incident using on-board sensors to maintain safe distances. (Copyright: Getty Images)