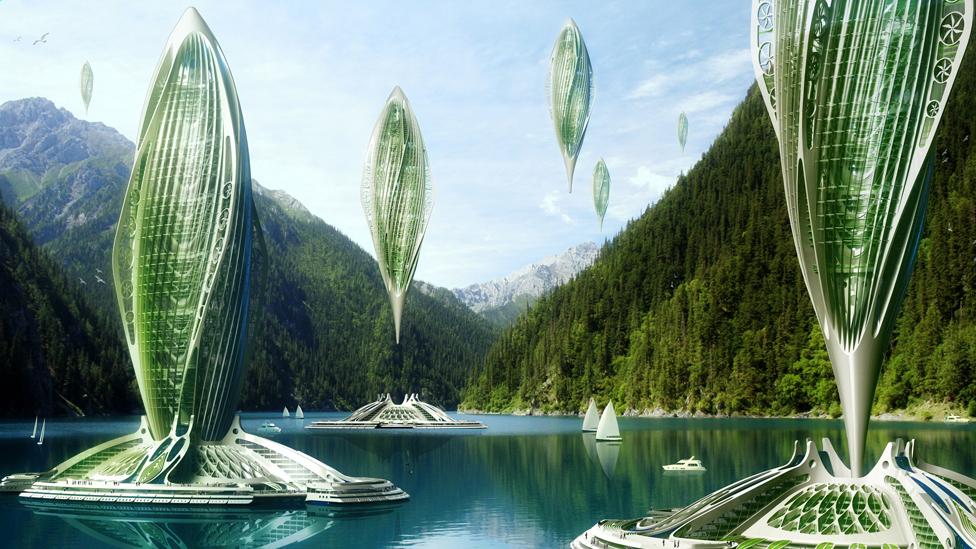 By Neil Spiller 25th June 2013
Urban buildings use up precious materials and cause pollution. We need visionary thinking to create more sustainable designs that respond to their environment, writes architect Neil Spiller.
B

By the middle of this century, our cities are likely to be hotter, experience more dramatic changes in weather, be noisier and have an increasingly tenuous relationship with our natural world.

There’s a problem. Not only are cities responsible for 40% of our total carbon emissions, but they also deal with a limited set of physical conditions, and assume that our weather is going to be constant. Our buildings are designed for dryness and therefore deteriorate in the presence of water. Modern architecture is also designed to just house people, not other life forms, and therefore does not inherently promote biodiversity.

We therefore need to think about architecture very differently. We must search for new models for constructing buildings, as well as searching for improvements to our current industrial processes.

Already, designers and architects are considering more ecological urban design, especially in the way that resources are used. These new fabrics are quintessentially fluid, and can respond to changing urban demands. For example, Paris Habitat, the capitals’ largest owner of social housing is using body heat from the Paris Metro to heat buildings. Bioprocesses are powering buildings such as the BIQ house with a bio reactive facade, which was built as part of this year’s International Building Exhibition (IBA) in Hamburg. And WSP’s plans for seasonal ponds to deal with water storage in Jaypee City in India begin to deal with the changes that happen as the seasons change. Cities are being imagined that challenge the permanence of building materials and their inertness, and we are likely to see a change in our experience of cities thanks to augmented realities – a new way of seeing via our smart phones and Google Glasses.

That said, we need an even greater range of approaches to enable our cities to respond to potential challenges – some of which may be permanent, such as sea-level rises and unpredictable weather patterns.

I founded the Avatar (Advanced Virtual and Technological Architectural Research) group in 2004 to explore how the rapidly changing technologies would affect architecture. These promising possibilities could lead to new building materials, especially by using emerging biotechnologies, and might encourage diversity in the kinds of architectures we produce.

We explore realms as varied as synthetic biology, surreal digital theory, film and animation, interaction design, and mixed and augmented reality to inform architectural, landscape and urban design. Our agenda is best illustrated by Lars Lerup’s concept of the "bull machine", where the Pamplona Running of the Bulls ceremony is described as a loose and evolving set of couplings between technology, animals and humans, and how they interact with each other. Using the idea of the ‘bull machine’ Lerup observes how the city's traditional effects on us may be outmoded. He proposes new building materials that could allow new opportunities through their fluid structure, and says architecture and the role of architects must be rethought. Interactions between these dynamic elements provide a "new" way to think about design, where the purpose of a particular space can be decided by the person using it.

One example is protocells – life-like chemistries that mimic natural processes – which Professor Lee Cronin's group at the University of Glasgow are using to develop into a carbon-fixing paint. Elsewhere, the first permanent algaeponics unit in Britain will be installed on the green roof at the new school of Architecture, Design and Construction in 2014, creating a sustainable oil which can be used as fuel. Simon Park at the University of Surrey is integrating bacterial technology into building facades, and using 3D desktop printers to mix chemistries as a form of wet fabrication, which is a very flexible material.

Everyday architecture is being re-imagined around the world. For instance, there’s the Paik Nam June Media Bridge, a proposed river crossing in the South Korean capital Seoul. This bold design will be much more than a bridge; included in its vast form will be a park, a mall, meeting spaces and a museum. Solar panels on the structure’s top will generate power. Such concepts allow us to see bridges in new ways – not just as a method of crossing natural barriers, but as a new kind of structure for living and working on.

Rather than constructing buildings from inert materials transported across the world, people are exploring technologies that could transform one group of substances into another on a building site. For example, Markus Kayser is transforming sand into glass using a solar sinter, which focuses the sun’s rays to create obsidian. Other transformative processes include Ginger Krieg Dosier’s printed sandstone bricks of bio-manufactured masonry grown using bacteria.

And it’s not just buildings on Earth that we need to be thinking about. Phil Watson, Dr Rachel Armstrong and Elizabeth Anne Williams are working on initial drawings and concepts for Project Persephone, part of Icarus Interstellar initiative that aims to construct a crewed interstellar craft within a hundred years. Persephone aims to build a synthetic biological interior for the spaceship, working with teams from the fields of science, technology, architecture, design, art, humanities and the social sciences. Fundamental design principles may not only help create a viable concept for life in space, but could be translated into models and prototypes to deal with real-world challenges back here on Earth, such as how do we deal with resource shortages in our megacities?

There are many unknowns to the project, but by limiting our thoughts, we limit architecture and its ability to respond to the trials and tribulations of a challenging future. Our 21st Century architecture is developing the theory, toolsets and infrastructure that will enable the next generation of architects to deal with the unknown. By rethinking the nature of the fabrics that a city is made up of, they may be better able to respond to our ever-changing needs, particularly as our population expands. In addition, a flexible approach to architectural design may also help us think about sustainability and biodiversity. Protocells, which are more vigorous in a fluid medium, could help buildings better withstand wet conditions. Using new design models, technologies and materials, it may be possible to escape the bonds of industrial manufacturing processes as the driving force for human development. Nothing is impossible. 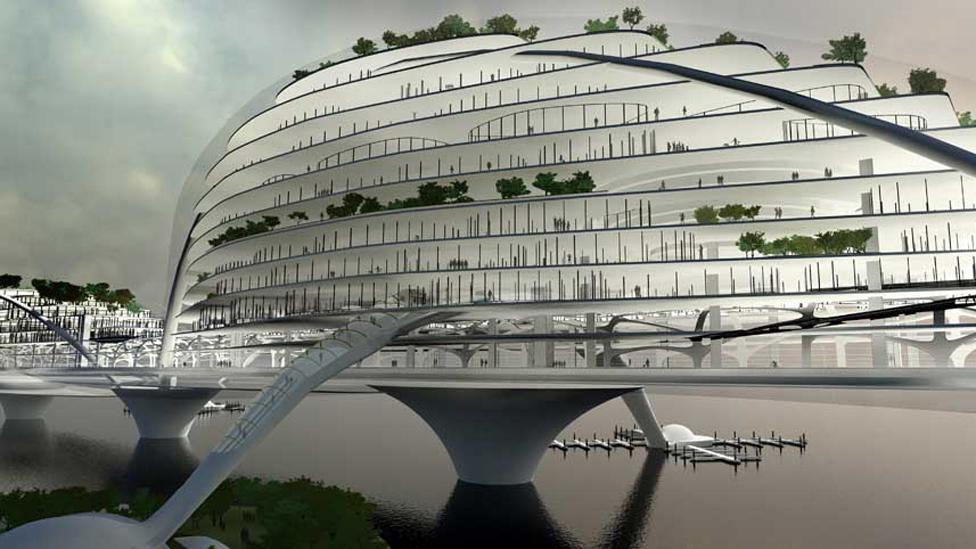 This concept, the Paik Nam June Media Bridge, would house roads, parks, offices and even a museum in a structure crossing the Han River near Seoul. (Copyright: Planning Korea)

This concept, the Paik Nam June Media Bridge, would house roads, parks, offices and even a museum in a structure crossing the Han River near Seoul. (Copyright: Planning Korea) 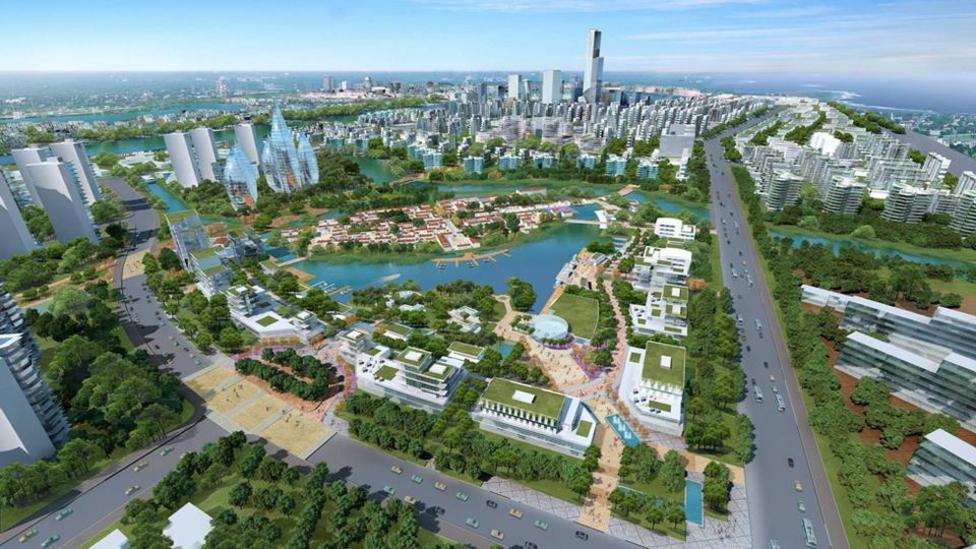 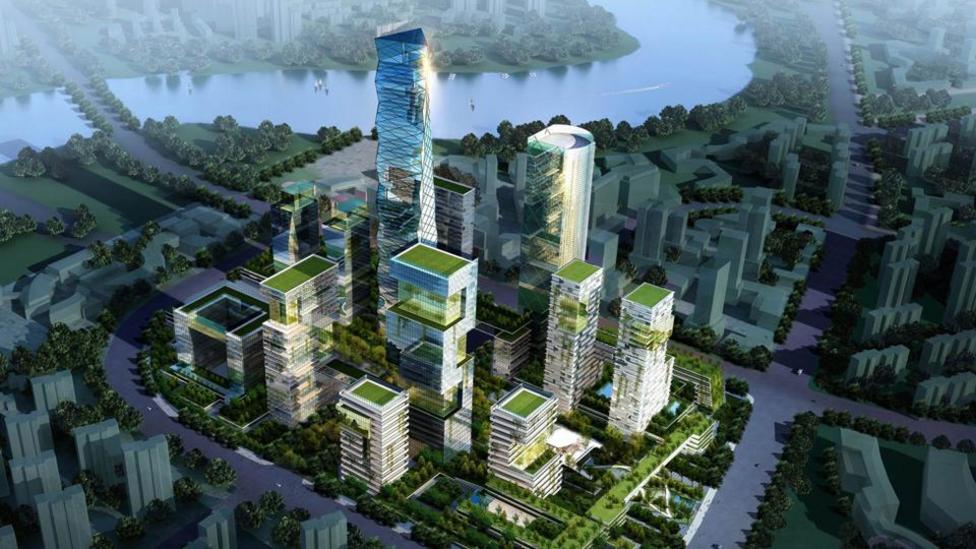 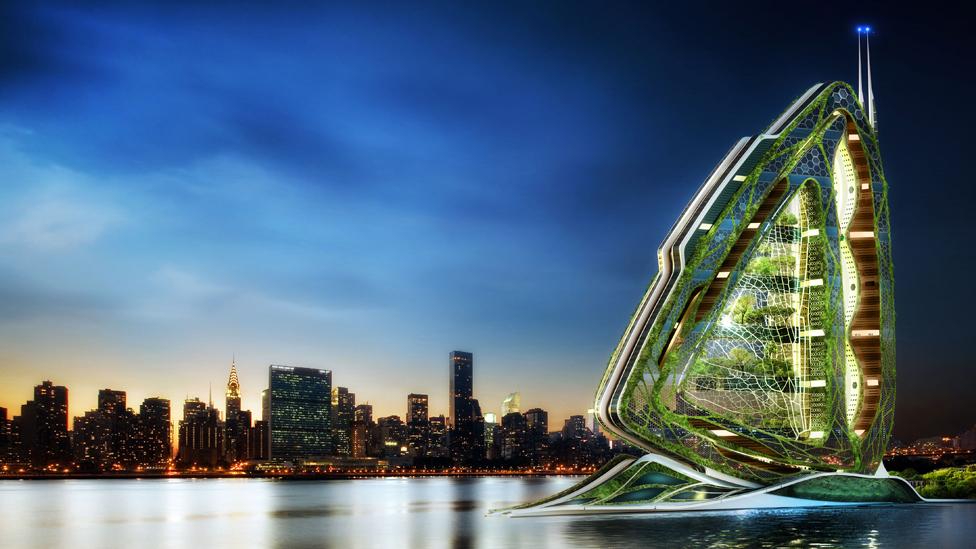 Another of their concepts Is the Dragonfly city farm, which grows crops and feed for animals on multiple levels, and generate power through turbines: (Copyright: Vincent Callebaut)

Another of their concepts Is the Dragonfly city farm, which grows crops and feed for animals on multiple levels, and generate power through turbines: (Copyright: Vincent Callebaut) 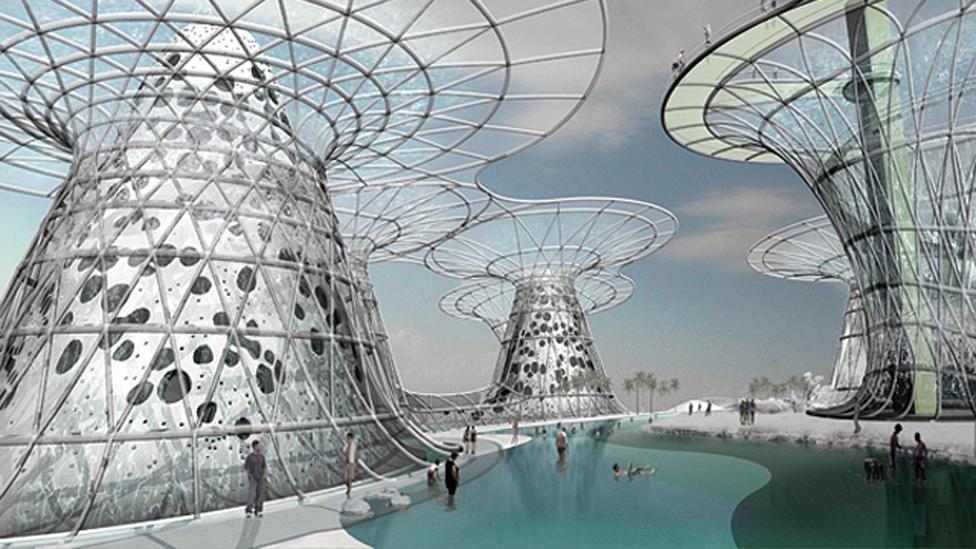 US architect Phu Hoang’s design for the Middle East’s Dead Sea is a series of artificial islands to capture water otherwise be lost by evaporation. (Copyright: MODU)

US architect Phu Hoang’s design for the Middle East’s Dead Sea is a series of artificial islands to capture water otherwise be lost by evaporation. (Copyright: MODU) 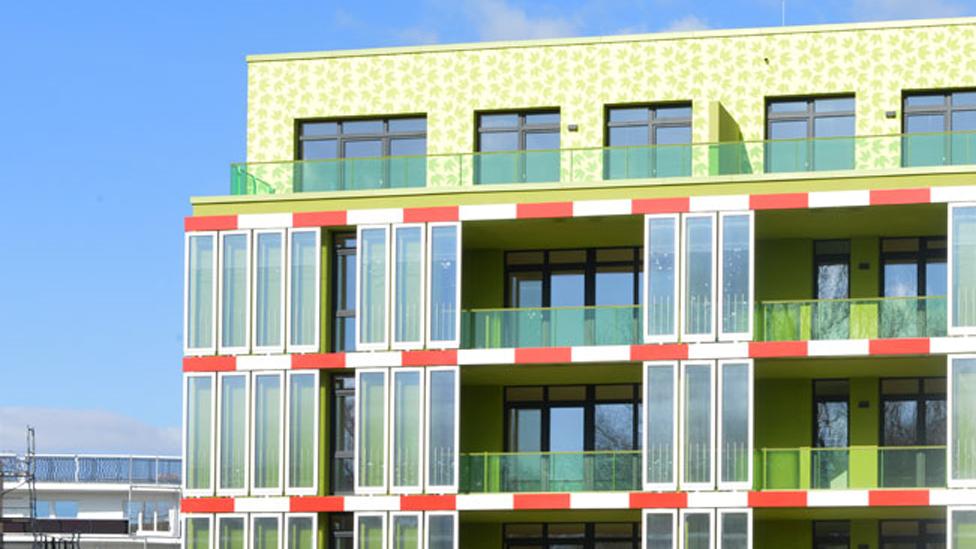 In Germany, this building has become the world’s first to have a “bio-reactor facade” – panels filled with algae which produce energy and can cool the interior. (Copyright: IBA)

In Germany, this building has become the world’s first to have a “bio-reactor facade” – panels filled with algae which produce energy and can cool the interior. (Copyright: IBA)