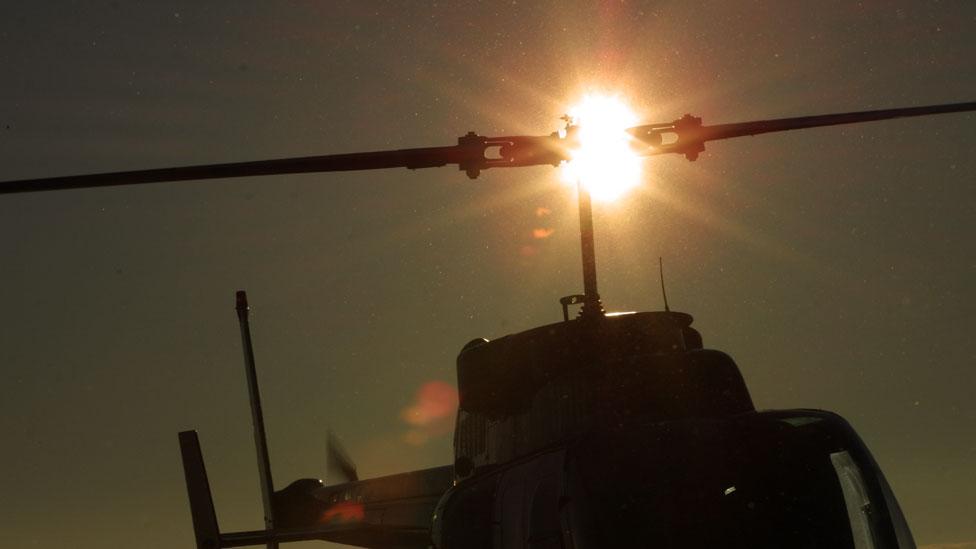 By Jonathan Kalan 25th June 2013
Amateur enthusiasts are creating planes and helicopters out of recycled parts and little training. So why aren’t countries doing more to harness this talent?
I

Its propellers are powered by an engine that once milled animal feed. Aluminium bars, bolts and plastic sheeting bought from a local shop and held together with cheap gum make up the frame. A large crowd applauds enthusiastically as young farmhand Onesmus Mwangi publically unveils the 25-kilogramme (55-lb) helicopter he has built from salvaged scrap in his backyard in the village of Magomano, Kenya. And for good reason.

Mwangi, 20, dropped out of school at the age of 12 and has no formal technical training. His labour of love took up every spare waking moment outside his farm job for over seven months, not to mention his savings of 57,000 Kenyan Shillings ($650) – about a year-and-a-half’s salary for him.

He is, of course, not the first person to build a helicopter. We can’t even be sure his machine actually flies. The engine works and he claims it has flown a few feet, although this cannot be confirmed. Regardless, his raw talent and determination have attracted local, national and even international recognition.

In recent years the media has highlighted a series of similarly inspiring achievements by other African amateur aviation enthusiasts, whose flying machines have been created with scant resources and little training. Some have achieved lift-off, others haven’t. Their stories are different, and yet linked by parallels in the barriers they have faced and overcome, and their motivations for doing so.

For at least as long ago as the Wright Brothers’ first powered flight in 1903, novice tinkerers and expert engineers have engaged in innovative aviation projects, varying in size and scale. Canadian engineer Paul Moller, for example, has put a good part of the last 40 years and at least $100 million into developing the Moller Skycar 400, an affordable personal aircraft that takes off and lands vertically. Then there is Toronto-based Jay Godsall, who is developing an aeroplane-airship hybrid with a helium-filled chamber and solar cells designed to get into remote locations for disaster relief, exploration and research.

Aeronautical innovators in the developing world have fewer resources, but they have similar motivations, says Emeka Okafor, curator of Maker Faire Africa, an annual pan-African event that showcases ingenuity and innovation.

“In any society, there’s always a subset of individuals with an interest in tinkering, fabricating, mimicking, inventing,” says Okafor. “At the very fundamental level, what drives them is curiosity. On top of that, it’s problem solving, or addressing gaps they see in society.”

Social recognition and material rewards matter too. “I built the helicopter to showcase my talent, hoping that people would invest in me and give me an opportunity to build bigger and better things,” says Mwangi.

The rise of the internet and social media in particular has brought greater attention to such efforts over the last decade. Gabriel Nderitu Muturi, another Kenyan, spent three years building a homemade two-seater aircraft running on a 40-litre Toyota engine. In 2010 he was forced to give up on this model, which failed to get off the ground due to “many troubles with weight and engine power”, as he wrote in a report on his efforts. Last year he designed and built a lighter single-seater, and is currently planning remote-controlled tests.

Then there is the Somaliland trio Mohamed Abdi Barkadle, Saed Abdi Jide and Abdi Farah Lidan, who, in 2010, built a helicopter from an old van engine and scrap metal with no financial support, with the aim of using it to fight fires. It is unclear whether their chopper ever made it off the ground. Jide cites a “lack of money and time” as the main challenges.

However, greater exposure is not enough to help them overcome the tremendous barriers they face, which extend far beyond time and money.

First, of course, is the technical challenge. “Building an aircraft is incredibly complicated,” says Jim Gaunt, a bush pilot and mechanic based in Nairobi who’s been flying planes in Kenya for over 30 years. “Everything you put into an aeroplane has to get off the ground." Car and aircraft engines are very similar, however those that power cars are heavier, and made for rapid acceleration and deceleration, while those in aircraft are made lighter, and to run at a more steady speed. And of course while a Toyota or Honda engine can be found in many junkyards, cheap aircraft engines are far harder to come by.

Then, there is the cultural aspect. “What we have in most parts of Africa are lone wolf inventors, fabricators and dreamers, who unfortunately lack the types of support systems that are found in developed countries,” says Okafor.

A relative lack of financial and physical resources, and of education and training environments that foster innovation, in many African countries helps explain why the odds are stacked against these individuals. But it’s also frequently rooted in a failure of governments to recognise the role of innovation in development, which in turn comes from deeper societal attitudes.

In many African countries those who are most revered in history books are nation builders and founders, who, more often than not, were writers, artists, poets and politicos. The equivalents of the likes of Thomas Edison and Henry Ford feature far less prominently. “In Africa, they are invisible,” says Okafor.

Faced with this combination of obstacles, those driven by the passion to innovate face an uphill battle. After Mwangi unveiled his helicopter in April, his employer fired him, claiming the media attention was interfering with his work. Then, the local authorities confiscated his chopper, saying it was a “security risk”. The police have since returned it, but have forbidden Mwangi from flying it.

And yet sometimes these innovators do get the rewards as well as recognition. In 2007, 24-year-old Nigerian physics student Mubarak Muhammed Abdullahi spent nearly a year building a 12-metre (39ft) long helicopter out of spare parts sourced from old cars, motorcycles, and even a crashed Boeing 747, using money he saved from repairing cell phones and computers.

“When I was a kid I loved helicopters,” says Abdullahi. “Whenever I saw one in the movies, I used to ask ‘how does this thing work?”

Years later when he told his college friends of his plan to build one, they laughed. “Only whites can build things like that,” they said. His response was to build a bright yellow helicopter with push-button ignition, an accelerator lever and a joystick for thrust and bearing. It was powered by a 133-horsepower engine salvaged from a Honda Civic.

Unlike the flying machines of many other amateur aviation innovators, Abdullahi’s contraption actually flew, although never above a height of 2.1 metres (7ft). But it did earn him international recognition, a TED Global Fellowship and a scholarship to study aircraft maintenance in the UK.

He now has a well paid job working for an electronics manufacturer in the UK, but dreams of starting his own aircraft company. He reflects that he got little support from the Nigerian government, and says the barriers faced by people like him result in a tremendous “waste of talent” in Africa.

These stories beg an important question: how can Africa better encourage and harness the talents of its aero-innovators?

“That person in Africa building his own chopper is someone who can make things happen, who is willing to take risks,” says Robert Weiss, President of the X Prize Foundation, which creates global competitions with multi-million dollar prizes to fuel innovation. Weiss says he would like to encourage greater participation from amateurs based in developing world countries in future X Prize challenges.

Okafor, however, is not convinced this approach will help. “One of the reasons prizes work in the US and elsewhere is because you already have the basics in place – infrastructure, spaces, labs, etc,” he says. “When you don’t have those basics, even for someone who may want to participate in a prize project, there are a lot of limitations.”

He sees more potential in the establishment of creative community workshops such as the hundreds of “Maker Spaces”, “hackerspaces” and “fab labs” that have sprung up around the world. These open spaces offer access to equipment such as laser cutters and 3D printers, as well as computing facilities and advanced design software. Individuals can realise their ideas, as well as making links so they can collaborate in a supportive environment.

Such spaces do exist in South Africa, Egypt, Togo, Ghana, Kenya and elsewhere in Africa, but Okafor would like to see a great many more. He and others believe that the ultimate success or failure of projects undertaken by the likes of Mwangi, Muturi, Abdullahi and the Somaliland trio is less important than what they learn along the way, and where that takes them and their societies in future.

“We shouldn’t overlook or underestimate what these folks are doing,” Okafor says. “Whether they fly or not is not really important. These individuals have an interest in this form of transport. Can we imagine what they would be able to do if they had enabling environments?” 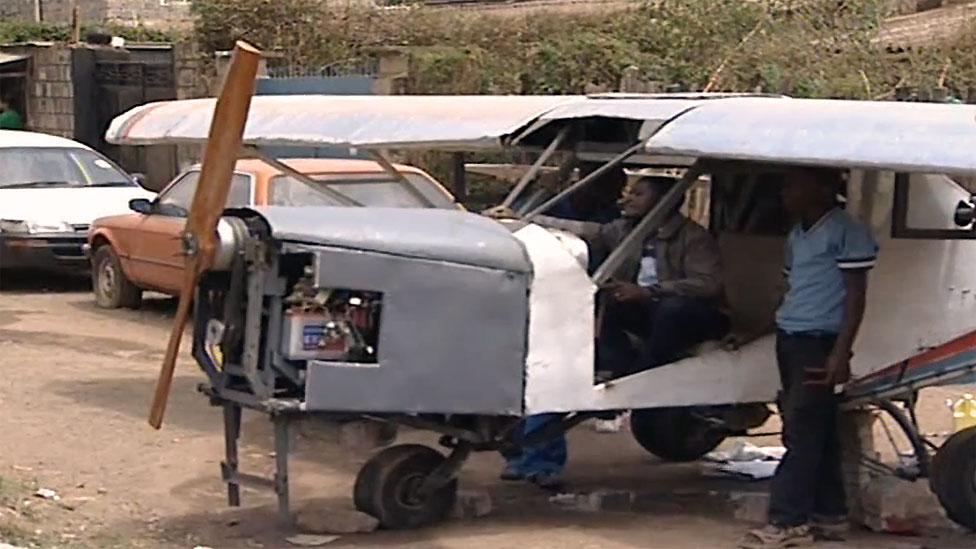 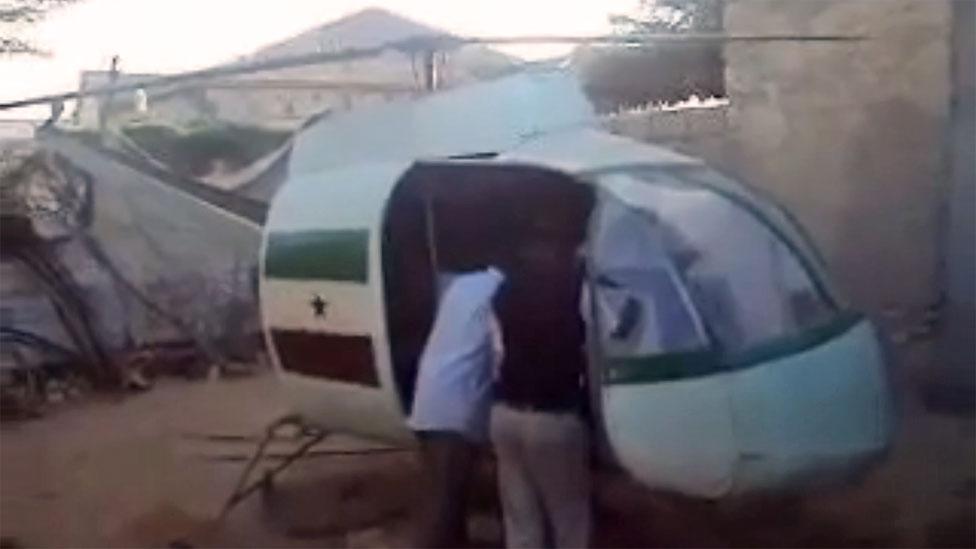 Somalians Mohamed Abdi Barkadle, Saed Abdi Jide and Abdi Farah Lidan tried to build a helicopter with the aim of using it to fight fires.

Somalians Mohamed Abdi Barkadle, Saed Abdi Jide and Abdi Farah Lidan tried to build a helicopter with the aim of using it to fight fires. 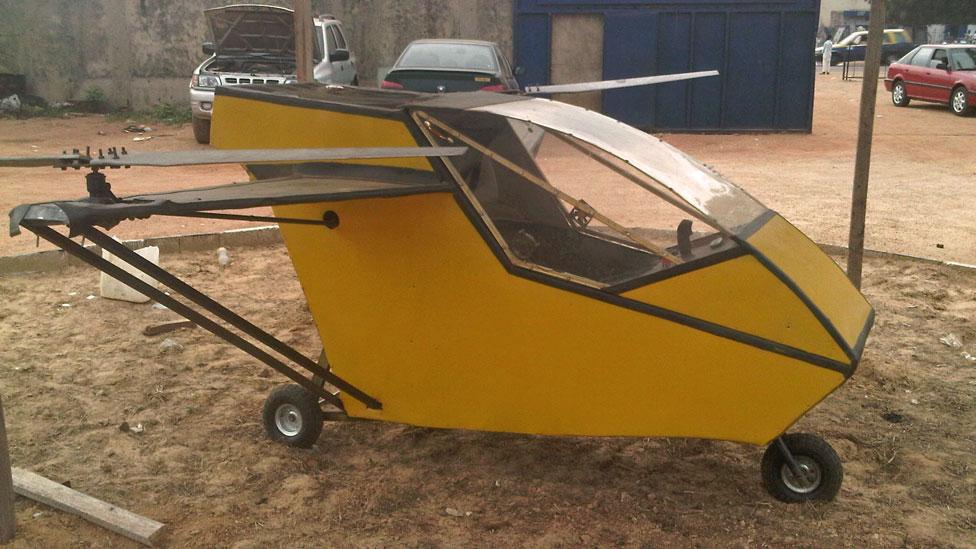 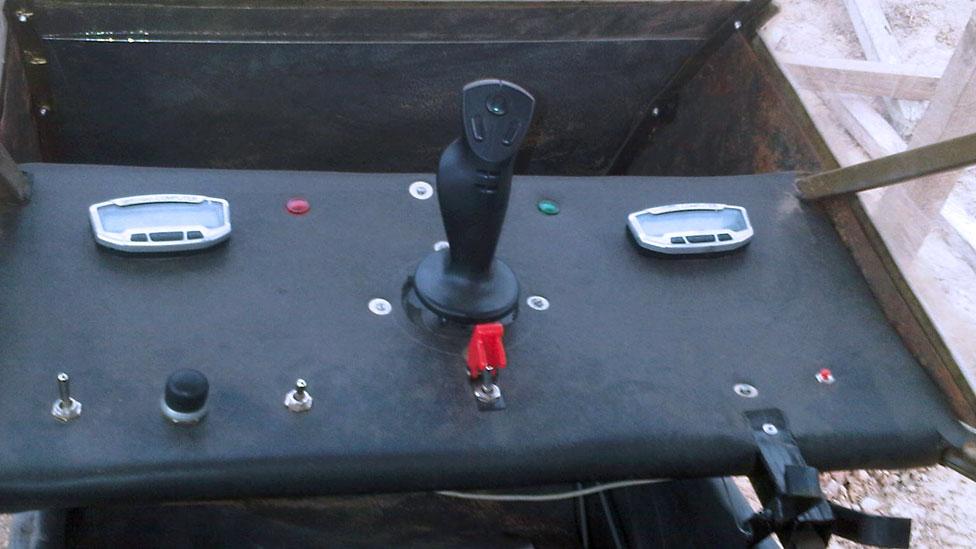 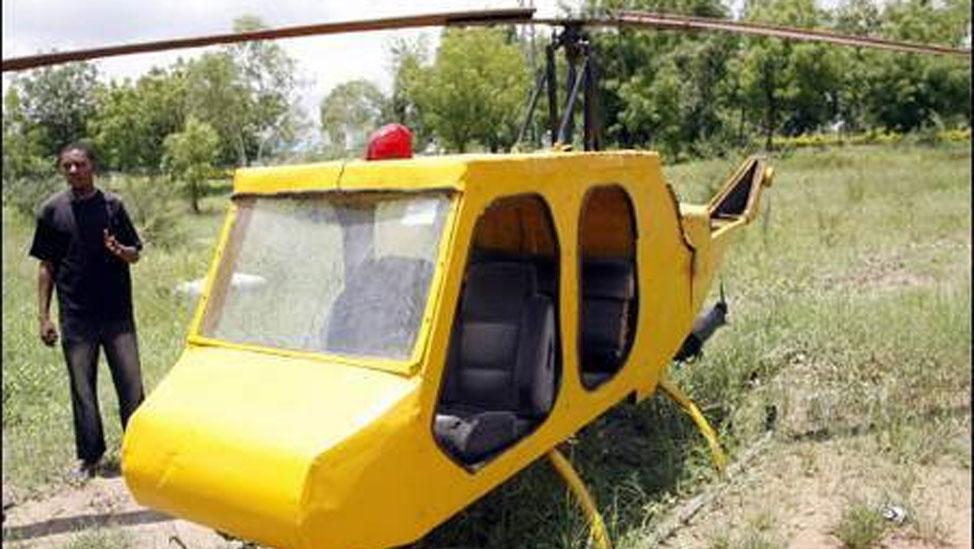 It led to international recognition, a TED Global Fellowship and a scholarship to study aircraft maintenance in the UK. (Copyright: Mubarak Muhammed Abdullahi)

It led to international recognition, a TED Global Fellowship and a scholarship to study aircraft maintenance in the UK. (Copyright: Mubarak Muhammed Abdullahi)