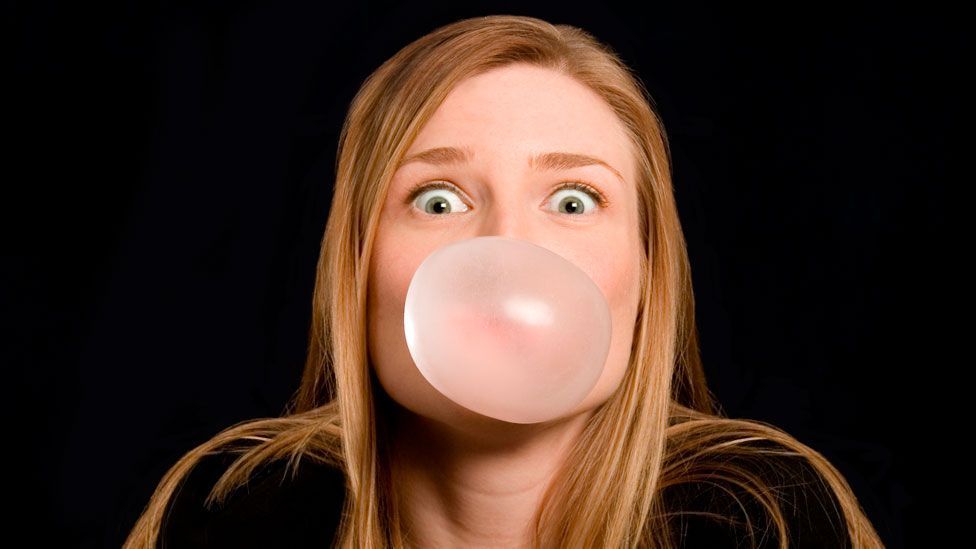 By Claudia Hammond 26th June 2013
As children we’re told not to swallow gum, because it will lie in your stomach for ages. Claudia Hammond chews over the evidence to find out if this is true.
I

Imagine if you swallowed a piece of gum in the summer of 2006. George W Bush was still in the White House. Twitter had yet to be launched. Pirates of the Caribbean 2 was at the top of the movie charts. It feels like a long time ago, but legend has it that if you had swallowed gum then, your body would be completing its digestion about now.

As children we’re told we mustn’t swallow chewing gum because it will take seven years to digest. Until then, we are led to believe, it will lie there in your stomach, oblivious to the usual bodily processes that break down and process foods. It's a statement that is confidently asserted in school playgrounds in many countries, but does it have any basis in medical science?

Chewing gum consists of a gum base, sweetener, flavouring, preservatives and softeners. Sugars and flavouring ingredients such as mint oils break down easily and are soon excreted. Likewise, softeners such as vegetable oil or glycerine don’t present a problem for the digestive system. The ingredient that can withstand both the acid in the stomach and the digestive enzymes in the intestines is the gum base.

Traditionally many manufacturers used chicle, the sap bled from the sapodilla tree, an evergreen native to southern Mexico, Central America and the Caribbean. But after American soldiers took their gum rations overseas during the World War II, its popularity spread and sapodilla trees could no longer keep up with demand.

Today most gum uses other natural or synthetic polymers. The US Food and Drug Administration permits the use of various substances, including butyl rubber, which is used to make inner tubes. Each manufacturer has its own recipe with the aim of getting the perfect degree of elasticity.

But even though the gum base cannot be broken down, that doesn’t mean it stays in your gut for seven years. Nor does it wind itself around your heart, as some also assert. Provided it’s a small piece, it does eventually find its way down the digestive tract. Foreign bodies such as coins can usually pass out of the stomach provided they’re less than 2cm in diameter. Chewing gum has the advantage over a lot of other accidentally-ingested objects in that it’s soft.

The only way that chewing gum could stay for seven years is if there was a vast amount of it, and even then symptoms such as constipation would mean it’s probably discovered soon. A 1998 paper reports outlines alarming case studies of three children who did develop obstructions as a result of the habit.

One was a four-year-old boy who had been suffering from constipation for two years. He found it so hard to go to the toilet that his parents began offering chewing gum as an incentive to try. He ate between five and seven pieces a day and always swallowed them, rather than spitting them out. After four days of fibre supplements, oils and enemas had no effect, doctors sedated him and removed a “taffy-like” mass (referring to its similarity to chewy, toffee-like sweets from the US) from his rectum consisting chiefly of gum. It wasn’t seven years old, but it did cause him serious problems.

Inside the second patient, also aged four, doctors found a multi-coloured mass, which again turned out to be chewing gum. Doctors said the patient was in the habit of swallowing her gum quickly in order to get more.

The third child was just 18-months-old. Doctors found four coins stuck together with a “peculiar sticky wax-like substance” in her stomach. It turned out that she regularly ate chewing gum, and, it appears, small coins. The families of two of the children were aware that they were swallowing their gum and found it “a source of levity”, according to the report's authors.

So regularly swallowing large amounts of gum isn’t a good idea. But if you have eaten the occasional piece, there’s no evidence that you will come to any harm. And, if you were to swallow some today, it will not hang around inside you until finally making its way out in time for the 2020 Olympics.

60 Second Idea
1Chewing gum should self-dissolve
Medical Myths
2Does coffee sober you up?
Will We Ever?
3Can we ever have safe cigarettes?
Medical Myths
4Is eating on the run bad for you?
Around the BBC