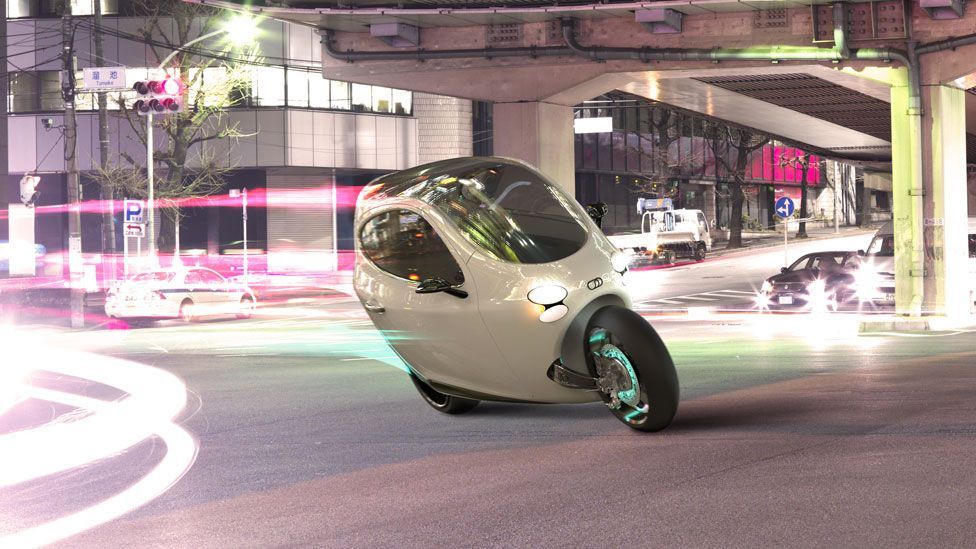 By Jon Stewart 1st July 2013
One company wants to reinvent urban transportation by developing a fully enclosed, two-wheeled electric vehicle that puts less car and more people on the road.
S
Sorry, this video is no longer available

Look around a city at peak traffic time and you’ll probably notice that most gridlocked cars contain only one person, despite having seating for four and space for their luggage. One option is ride-sharing schemes, which aim to have fewer cars and more people on the streets. There is a problem, according to Daniel Kim, Founder and CEO of Lit Motors: “Very few people actually like to carpool.”

His company’s approach is different: shrink the car. Imagine if you could cut the size of a car in half, you could fit twice as many cars onto the streets, and into parking spaces. “We want to put less car on the road, and more people,” he says.

The solution that the San Francisco-based company hopes to roll out looks like a hi-tech, streamlined egg on two wheels. The C-1 is a fully enclosed, all-electric vehicle that is a motorcycle in all but name. It has a top speed of over 100mph (160kph), and should be able to travel up to 200 miles between charges. Acceleration should be respectable at 0-60mph (0-100kph) in less than 6 seconds –more than enough to beat most cars away from the lights.

“What we’re doing is taking the safety and the comfort of a car, but integrating that with the romance, the efficiency, and the thrill, of a bike,” says Kim. “That still preserves the elements of freedom and independence that commuters today demand.”

The real innovation in the vehicle, though, is that it can stay upright, all by itself. The driver does not need to balance it at all. This is achieved with the use of two gyroscopes, underneath the seats. They contain heavy metal discs which spin at over 10,000rpm, and in doing so generate torque.

A spinning disc has a tendency to stay upright, just like a child’s spinning top. If you were ever made to hold a spinning bicycle wheel horizontally at school then you will have experienced the physics at work. Using two flywheels spinning in opposite directions means the team of engineers at Lit Motors can cancel out (or oppose) any force they do not want, and use the torque generated in useful ways, such as keeping the vehicle upright, or leaning it in and out of corners. The gyroscopes are under full computer control; no driver input required. The company says it is confident that the C-1 will stay upright even if it is side-swiped by another vehicle at 30mph (50kph).

The prototype the company showed me was a work in progress, with one seat and a large bank of computer processors taking up most of the internal space, but the final design calls for two seats, one behind the other. “This would all be shrunk and nicely packaged for our production vehicle,” says Kim.

I was told that at 6 foot 2 inches (1.88m) I am at the upper end of the height range that it is designed for, but a small steering wheel meant there was enough room for my knees. Being surrounded by glass helps give the perception of space too, but I am not sure how I would feel pulling alongside a truck or SUV at speed.

Lit Motors doesn’t like to think of the C-1 as a motorbike as that could limit its market. This, the company believes, is a genuine car replacement for many people, but it remains to be seen if that will translate into sales. In the US, pick-up trucks and SUVs are still big sellers. Will their owners be persuaded to down-size to make their commutes easier? The Smart Fortwo micro city car may be a good comparison. It also cuts the amount of car on the roads by halving the length rather than the width, and it was marketed on its ease of parking. Since its introduction 15 years ago it has become a common sight in European cities, though much less so in the US. The market for cars is strongly linked to the price of fuel. If there is a sharp increase in gasoline prices in the future electric, efficient, vehicles like the C-1 could see strong demand.

In the US at least, it will legally qualify as a motorcycle, meaning it can split lanes and park in motorcycle specific spaces. Lit Motors also has big plans for the future, which include new designs specifically for countries where the bike or scooter is already a dominant form of urban transport. I will be looking at that prototype in my next column article.