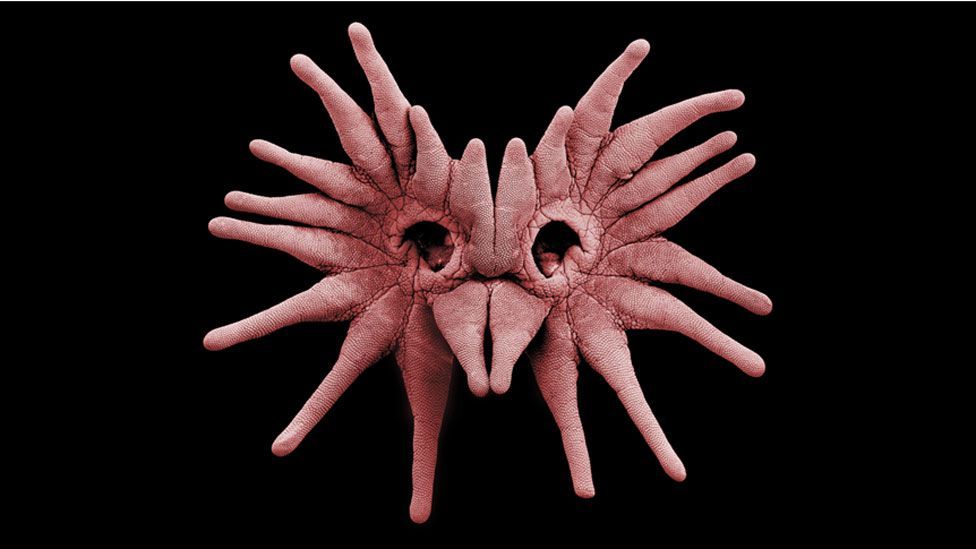 Bemused biologists have found the machinery that helps us identify smells and tastes crops up everywhere – from our kidneys to sperm. After many years they think they might know why, as Veronique Greenwood reports.
S

Sometimes the results of science experiments are just too weird to believe. In 2005 Jennifer Pluznick hypothesised that a gene known to play a role in a common form of kidney disease did so by acting as a master switch for other genes. Lab tests supported her theory; however, when she looked at which genes it acted on, she did a double take. Among them were several that encode scent receptors, the chemical sensors that allow us to identify smells.

At first Pluznick didn't believe her eyes. As far as we know, kidneys filter waste from our blood and get rid of it in urine. They are not sensory organs. "I wasn't sure if we could believe the data," she says. "It seemed really spurious." Thinking there had to be a mistake, Pluznick, then a researcher at Yale School of Medicine, in New Haven, Connecticut, carried out another experiment. She soaked a slice of kidney in a fluid that would make scent-system proteins glow fluorescently under a microscope. When she peered down the eyepiece, it was lit up like a Christmas tree.

Pluznick has spent the last eight years trying to understand why.

The sense of smell is one of our most powerful connections to the physical world. Our noses contain hundreds of different scent receptors that allow us to distinguish between odours. When you smell a rose or a pot of beef stew, the brain is responding to scent molecules that have wafted into your nose and locked on to these receptors. Only certain molecules fit specific receptors, and when they slot together, like a key in a lock, this triggers changes in cells. In the case of scent receptors, specialised neurons send messages to the brain so we know what we have sniffed. The discovery, in 1991, of around 1,000 genes involved in generating scent receptors was rewarded with the Nobel prize in Medicine over a decade later.

What are they doing there? As these findings became public, researchers poured over genomic data and reported that low levels of these receptors occurred in almost every tissue in the body. One possible explanation was that they are evolutionary leftovers whose previous functions were lost in time. However, Pluznick and others have unearthed evidence that, in some tissues at least, they are anything but passive. Their findings suggest that our bodies are “smelling” and “tasting” things deep inside of us, and that these abilities are crucial to our health.

The kidney is made up of miles of minuscule tubes, twisted into an exquisite lacework. Threaded through these is a system of blood vessels, and in places where these and the kidney's tubes are especially intertwined, water, nutrients and other molecules seep through the walls and pass between the two. What the blood doesn't need is passed off to the urine forming in the tubes, and what it does have a use for – keeping blood pressure stable, for instance – goes back. If this process stops working the body will soon shut down, poisoned by its own exhaust fumes.

Peering more closely down the microscope at that slice of kidney, Pluznick saw the fluorescent glow was emanating from the macula densa, a group of cells that play a central role in this chemical back-and-forth, sampling the forming urine as it goes by and sending out alerts to adjust the blood filtration rate. “The macula densa is the only cell type in the kidney that you would think of as being a chemical sensor,” says Pluznick. “It made a hell of a lot of sense, and it made me think it was real.”

The next step was to figure out what would happen if these receptors were absent in this region of the kidney, using engineered mice that lacked one of scent receptors Pluznick identified in the kidney, called Olfr78. Tests revealed these mice had kidney problems involving their blood filtration rate and the production of renin, a hormone which stimulates the constriction of blood vessels to increase blood pressure. Both of these are controlled by the macula densa.

Pluznick now began to devote herself full-time to the puzzle. Identifying which chemical "keys" – known as ligands – were binding to the Olfr78 receptor "locks" would help her understand the bigger picture of what the receptor was responding to. In doing so, her work took her from one weird and wonderful discovery in biology to another: the microbiome.

Our bodies contain trillions of bacteria, fungi, and other microorganisms. Those in the human gut fulfil various important functions, such as breaking down certain foods into energy and useful nutrients, suppressing harmful microbes, preventing allergies and assisting the immune system in a number of other ways. The evidence that the balance of different microbes we have inside us is important to our health has been growing rapidly in recent years. People with irritable bowel syndrome, obesity, Alzheimer's disease, Parkinson's and depression have been shown to have differences in gut bacteria when compared to healthy people.

Pluznick acknowledges the picture is a complex and incomplete one, further work indicates another receptor that also binds to short-chain fatty acids has a greater and opposite effect. However, she believes the work shows the scent receptors she accidentally discovered are a previously unknown means for bacteria to tell the kidney to make blood pressure changes that allow them to best carry out their health-related functions.

As Pluznick was unravelling this mystery, other researchers were investigating taste and scent receptors elsewhere in the body. Yehuda Ben-Shahar, now a professor at Washington University in St. Louis, found cells in the human airway equipped with bitter receptors. These cells are covered in microscopic hair-like protrusions called cilia which flap when dangerous chemicals are breathed in, helping to flush them out of the body. Bitter receptors in the tongue are thought to have evolved to help us identify poisons, and Ben-Shahar wondered whether those in the airway might be protecting us in a similar way.

He and his collaborators found that when receptors in these cells were exposed to certain noxious molecules, it triggered a cascade of events that culminated in the flapping of the cilia. This made Ben-Shahar think that what we know as bitter receptors might better be called danger receptors. “We call them bitter but that's only because when we taste with them that's what we get," he says. "Probably what's uniting them is things that we try not to take in."

In fact, work by Noam Cohen, an ear, nose and throat doctor at University of Pennsylvania Medical School, suggests an intriguing role for bitter receptors recently discovered in the sinuses. He found one particular type can intercept the chemical signals that bacteria send to each other when they are coming together to form biofilms, a manoeuvre that greatly strengthens their defences against immune-system attacks.

When the bitter receptors in the sinuses pick up these signals, they set in motion an attack against the bacteria, causing cells to release toxic gas and cilia to flap. If people have a genetic variant that produces a different form of this bitter receptor, however, they are deaf to this back-channel bacterial chatter, and are more prone to severe sinus infections.

Patients who regularly get serious sinus infections often opt for surgery. However Cohen, who, along with Ben-Shahar, presented some of his findings at April's Association for Chemoreception Sciences meeting in Huntington Beach, California, speculates this may not help those with bitter receptors that can't pick up these signals. Since the bitter receptors in an individual's sinuses are the same as those on their tongue, Cohen suggests a test that tells clinicians which version of the receptor patients have on their tongues could help guide treatment.

Pluznick's research has revealed the existence of Olfr 78 receptors beyond the kidney, in blood vessels in the skin, heart and muscle. Scent receptors may be even more widely distributed, Firestein thinks, in blood vessels right across in the body. There's no better place for a chemical sensor, he points out, as the blood is the highway by which substances move around the body. This could explain why the receptors show up in so many places, since tissues are shot through with blood vessels bringing in nutrients and ferrying away waste.

What's emerging is a picture of these receptors as a kind of general-purpose chemical sensor. Consider a doorbell: the button next to your front door is hooked up to a little machine that can be programmed to play almost any kind of tune, a clock chime, a fire alarm, or "Wild Thing" if so desired. The button doesn't care what is being played – it just relays to the machine the message that a finger is pushing on it. These receptors are like that button, and the finger is anything with the right chemical structure to bind to it. The output might be the perception of a scent, the alerting of the immune system or the beating of cilia. “If you say olfactory receptors in the kidney, it sounds kind of nuts," says Pluznick. "But if you say that chemical sensors are in the kidney, I think it makes a heck of a lot of sense.”

We just happened to come across the receptors in the nose and the mouth first. It's intriguing to think this role may be pre-dated by their chemical-sensing capacities in other organs. Some see it as unlikely given that they are present in much higher numbers in the nose and mouth, but others disagree. “We call these taste receptors, but maybe they aren't taste receptors," says Ben-Shahar. "Maybe they were doing a lot of things before. Recycling is a very strong theme in evolution.” Cohen puts it more strongly. "I'm willing to bet that these bitter receptors were on the airway before they migrated to the tongue, that this is where they really belong."

Pluznick is now a professor at Johns Hopkins School of Medicine, in Baltimore, Maryland. It has been a long time since she studied kidney disease. Her lab is focused on understanding how these receptors work, and how they contribute to kidney function. Pluznick acknowledges there is still a lot to discover about the broader functions of what we still currently call scent and taste receptors, but she and others have made a start. She chuckles as she remembers how she complained to her academic supervisor about the "bad" data from her kidney gene experiments.

"He kind of looked at me for a second, and he was like 'Scent receptors in the kidney. That would be cool though, right?' At that point we both still thought it was one of those crazy, stupid ideas you laugh about later." Crazy perhaps, but very far from stupid.

CORRRECTION (12/07): We stated that the engineered mice used in experiements had come from Stuart Firestein's lab, but this was not the case. This has been corrected.

In Depth
1The beasts inside you
Horizons
2Electronic nose sniffs disease
Will We Ever?
3Will we ever... grow organs?
60 Second Idea
4'Smell machine invokes disgust'
Around the BBC