Loading
Will We Ever? | Physics
Will we ever … have reliable nuclear fusion power?
Share using EmailShare on TwitterShare on FacebookShare on LinkedinShare on Whatsapp 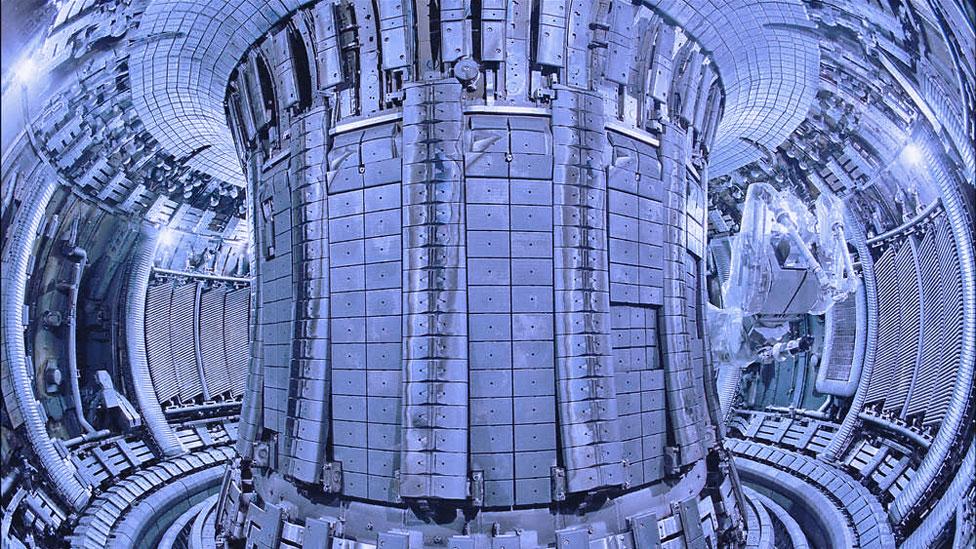 By Matthew Francis 18th November 2014
For decades scientists have tried to generate an untapped source of energy by creating the conditions inside stars. Is the quest realistic or a futuristic joke?
I

In the era of global climate change, and concerns about humanity's long-term reliance on fossil fuels, many think the solution lies in alternative sources of energy, including nuclear power. All our nuclear power plants are based on fission: splitting heavy atoms into lighter components in a controlled fashion. Though fission is safe when all goes well, the fuel is radioactive, waste disposal can be problematic, and as the Fukushima disaster showed there is a high cost to accidents.

Nuclear fusion is in principle cleaner and comes from a cheaper, more abundant fuel source: an isotope of hydrogen called deuterium can be extracted from water and only helium is produced as waste. From The Matrix to SimCity 2000 to political dreamers, fusion has often been seen as an inevitability for society. However, despite decades of work nuclear fusion remains a dream. As the joke goes fusion is the power of the future – and always will be.

That's not because creating a sustained fusion reaction – in which more energy is produced than is required to start and maintain the process – is impossible or even terribly hard to achieve (at least by high-energy particle physics standards). The most infamous example of a fusion reaction is the hydrogen bomb, which sacrificed control and safety for the sake of violence and death. Fusion reactors obviously need to have more stringent requirements.

To see what's needed to create a sustained reaction, let's look to the best-known fusion reactors of all: stars. In the core of a star like the Sun, strong gravitational pressure forces together hydrogen plasma – an equal mixture of protons and electrons. Extreme conditions of 15 million-degree-temperatures and high pressures mean that protons have enough energy to overcome their mutual repulsion for each other, allowing the attractive forces to kick in. When protons fuse together they are converted into neutrons and release a lot of energy.

Bluntly stated, we can't recreate those conditions, even if we wanted to. Stars have a sufficiently large mass to contain the hydrogen plasma by the force of gravity alone, but we don't have that option, so physicists have to confine plasma using electromagnetism instead. Researchers can also start with deuterium or tritium plasma instead of hydrogen to lower the energy required to start fusion. (Tritium is a hydrogen isotope consisting of a proton and two neutrons; unlike normal hydrogen and deuterium, it's unstable and therefore harder to keep around.) However, the temperature and pressure still needs to be high, so it requires a larger energy input than fusion liberates, which defeats the purpose.

Part of the difficulty lies in the nature of plasma. If you put a normal neutral gas, such as oxygen, in a container you can increase both pressure and temperature by compressing it. Plasma, on the other hand, consists of charged particles at sufficiently high temperatures to melt the container walls. Also, without maintaining conditions carefully, the electrons tend to reunite with protons, creating a neutral hydrogen gas that's useless for fusion; it's imperative that the container trapping the plasma contain no gas, for similar reasons.

Some hope lies in using elements other than hydrogen, as these contain more than one proton per nucleus. That increases the electric repulsion and in some cases can make the energy barrier to fusion even higher. While some fusion reactions involving helium, lithium, or boron are areas of active research, a major problem is that these materials are far rarer on Earth than hydrogen.

All is not lost, however. Researchers are pursuing several possible solutions to the fusion problem, mostly based on clever methods for confining or compressing deuterium. The oldest of these is magnetic confinement, in which strong magnetic fields act as the “walls” of a container.

The best-known incarnation of this is the tokamak, first built in the Soviet Union in the 1950s. In a tokamak, deuterium and tritium are injected into a doughnut, or torus-shaped chamber, and heated to the point at which its electrons break free. Magnetic fields running along the centre contain and squeeze the plasma, and the high temperatures within the plasma then facilitate fusion. However, even the best tokamak designs – including the Joint European Torus (JET) in the United Kingdom and the Tokamak Fusion Test Reactor (TFTR) in the United States – haven't broken the barrier of making more energy than is required to keep the plasma hot and trapped. Much hope is being placed on Iter (International Thermonuclear Experimental Reactor), a €15 billion ($22 billion) project designed to build the world’s largest tokamak in the south of France. Iter is expected to commence operation at the end of this decade, with the first proper fusion tests scheduled for 2028. But it has been dogged by logistical issues – last month the US Senate spending panel voted to stop contributions to the project.

Many think another method called inertial confinement provides the best hope for a workable fusion reactor. This uses bombardment by high-energy photons – X-rays – to confine and compress a pellet of hydrogen and its isotopes. Successive X-ray pulses emanate from a large number of lasers completely surrounding the pellet, doing the work of heating, ionising, and compressing the hydrogen to the point where it can fuse. The biggest barrier to a working model lies in the X-ray lasers, which require a lot of energy to operate, but researchers at laboratories such as SLAC in the United States and the European X-ray Free Electron Laser are actively working to solve the problem.

The Z Machine at Sandia National Laboratory in the United States is a hybrid between magnetic and inertial confinement. Though the Z Machine itself is not a fusion reactor (and in fact is partly used for developing models for nuclear weapons), the powerful magnetic fields and X-rays it produces are part of a project in which a pellet of hydrogen is repeatedly bombarded with intense pulses of light to compress it.

There are other methods for confinement and compression, and more will no doubt be developed. Another path is aimed at lowering the energy barrier to deuterium fusion: forming molecules using muons instead of electrons. Muons are the heavier, unstable cousins of electrons. (We all have family members like that, I think.) Their presence in a molecule of two deuterium atoms brings the nuclei much closer together, consequently making fusion much more likely. However, once the energy cost of making muons and creating molecules using them is added in, muon-catalysed fusion no longer becomes cost-effective.

So the question is will we find a way around any of these problems? As with many things, it depends on human scientific ingenuity, and the practical limits placed upon it. Fusion research is relatively expensive, so investing in it is an exercise in hope. More precisely it is hope that once a sustainable fusion reactor is invented, it will repay the investment many times over.

Smart Planet
1The quest to recreate the Sun
Smart Planet
2How to power the urban revolution
In Depth
3Space-based solar farms power up
Will We Ever?
4Will we ever... give up gas?
Around the BBC