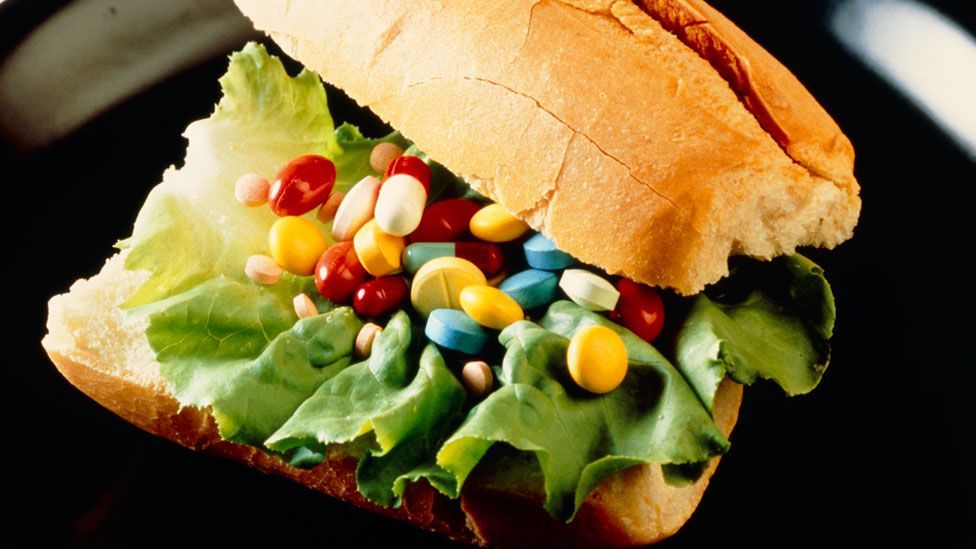 By Quentin Cooper 19th August 2013
After the first lab-grown burger, what else might we be making a meal of decades from now? Science fiction offers some clues – some bland, others grisly.
P

Pass the salt. And the pepper. And while you’re at it, the ketchup too.

They said it politely, but these were among the reactions of the two expert “tasters” who earlier this month got the first taste of a potential food of the future – a burger grown in a laboratory. Funded by Google co-founder Sergey Brin, the five-year project took cells from organic cows, cultured them in a nutrient solution to develop muscle tissue, and then teased them into thin strands of meat.

To make what was barely a quarter-pounder required tens of billions of lab-grown cells and nearly 20,000 of the cultured strands. Plus egg powder, beetroot juice, breadcrumbs, salt and saffron to add texture, flavour and colour to the otherwise white meat. And $330,000.

The result? One taste tester said it was “close to meat, but not that juicy”. Another described it as “like an animal protein cake”.

Commercial cultured meat is at least a decade away, and with the backing of billionaire Brin and others, issues of taste and feel should be solvable. We do not yet know whether it can ever be produced cheaply and in large quantities. However with an estimated billion people are clinically obese, another billion seriously malnourished, and the global population expected to grow by two billion to nine billion by 2050, it is beyond dispute that the status quo is not sustainable. So do we have the appetite for change? And what might we be making a meal of decades or centuries from now?

Perhaps science fiction can offer some clues. There are serious novels like Paolo Bacigalupi’s The Windup Girl and Margaret Atwood’s Oryx & Crake (along with its sort-of sequels The Year of the Flood and the about to be published MaddAddam) which offer chillingly detailed dystopian visions of near futures in which food is either blandly synthetic, badly genetically modified, or both.

My favourite remains Harry Harrison’s 1966 Make Room! Make Room!, set in 1999 in a horribly over-populated and under-fed New York. Only the ultra-rich have access to meat or other fresh produce. The best that most in the apple-free Big Apple can dream of is a soylent steak made of soya and lentils. By the time the story was loosely adapted for the big screen in the 1973 film Soylent Green, [spoiler alert] high-energy wafers secretly made of human corpses were on the menu.

Less intellectually nourishing sci-fi food staples include the entire meal in a pill (or dollop or slab of gunk), as featured in Lost in Space, Silent Running and The Fifth Element, in which Leeloo puts chicken pills into a microwave and a second later pulls out a full roast with all the trimmings. Almost equally common are variations on Star Trek’s replicators which conjure up whatever you hanker after, with varying degrees of success.

Both may seem less credible than edible, but there is some science to each. The idea of all-in-one food pills goes back to the 19th Century and has been the subject of much serious research. And although we’re a long way from a replicator, Nasa recently admitted that as part of a programme “to turn science fiction into fact” they are funding work to develop a 3D food printer. So if we do ever send astronauts to Mars they might be tucking into freshly printed pizza.

Another dish frequently cooked up is a future in which we’ve embraced entirely nouvelle cuisine: something delicious, nutritious and entirely fictitious. I’m rather partial to Slurm, the disturbingly more-ish soda made from the secretions of giant extra-terrestrial slugs in Futurama. But perhaps the best example is spoo (so named because it’s oops backwards) in Babylon 5, which, although made from tiny alien worms, is supposedly as good as 23rd century eating gets.

It may seem bonkers to pin our hopes of feeding all the world’s billions on some entirely new species, but that’s what some experts believe will be inevitable as conventional food sources run out. There may be plenty more fish in the sea, but not the ones we’re used to eating. As a result, less traditional species are expected to increasingly find their way into trawlers, supermarkets and restaurants. A recent report published UN’s Food and Agricultural Organisation concludes that as the climate changes and waters warm there will be a global shift “from a fish to a jellyfish ocean”. Its author Ferdinando Boero, Professor of Zoology at Salento University, Italy, concludes: “If you cannot fight them... eat them”.

So look out for jellyfish cookbooks. And keep the salt, pepper and ketchup handy.