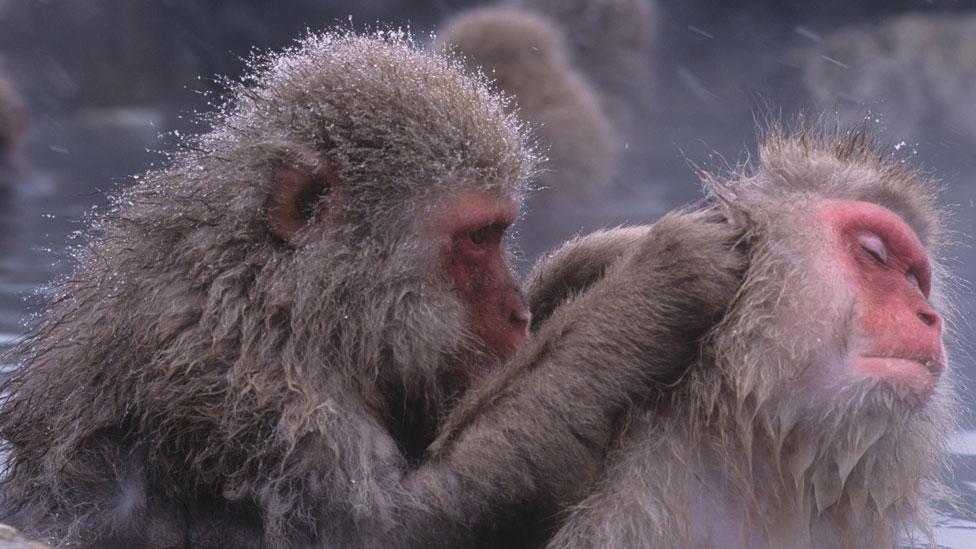 By Jason G Goldman 14th October 2013
From monkeys to humans, grooming is an important way to win favours and earn social standing. For babies, it can also be the difference between life and death.
W

When you run your hands through your lover’s hair, you’re probably not thinking about your place in the social hierarchy. Give your team-mate or colleague a pat on the back after a setback, and the chances are you’re not consciously seeking to change the mix of signalling chemicals in their brain. It may not seem like it, but these socially important rituals and others like them predate the time our species first walked the African savannah.

Human behaviours that involve physical social contact have a lot more in common with social grooming activities we typically associate with other species than we might initially think. When rhesus monkeys or chimpanzees pick through their friends' fur, they're not just helping them remove dirt and parasites from hard to reach spots. There is undoubtedly a hygienic benefit, but this behaviour, which animal behaviour researchers call “allogrooming”, has far greater significance. The gelada baboon, for example, spends 17% of its waking hours doing this when just 1% would be sufficient to achieve good hygiene, according to one estimate. Allogrooming is the currency of what primatologist Frans de Waal calls the "marketplace of services" in chimpanzee life: it defines the social hierarchy, which in turn dictates access to food, sex, and social support.

For example, one chimpanzee is more likely to share food with another that has previously groomed it. Grooming also serves to ease tensions in a chimp troop following an aggressive situation. One of the most complex forms of reconciliation among chimpanzees occurs when two rival males reach a point of stalemate, neither backing down nor escalating the aggressive interaction. Sometimes, a female breaks the deadlock and eases the tension by grooming first one male, and then the other, until the two become relaxed enough to end what amounted to an angry staring contest.

According to anthropologist Robin Dunbar, this works because grooming stimulates the release of endorphins – opiates produced by the brain that trigger feelings of relaxation by lowering the heart rate, reducing overt nervous behaviours like scratching, and even bringing on sleep. Female chimps that use grooming as a peacekeeping strategy may also experience their own rush of endorphins and enjoy many of the same benefits.

Humans, lacking the fur of our more hirsute evolutionary cousins, had to find a replacement for allogrooming. Like grooming, gossip establishes and maintains our place in the social hierarchy. Also like grooming, the social information that makes up gossip is itself a form of currency in human culture. Or, at least, that's the theory put forward by Dunbar. He argued, in his book Grooming, Gossip and the Evolution of Language, that the faculty of language allowed our species to substitute gossip for grooming.

But grooming, and related forms of social physical contact, hasn't gone away entirely. While we humans don't make a habit of picking through our friends' hair for parasites – nurses searching for lice on the first day of summer camp notwithstanding – the truth is that gossip hasn't completely replaced our need for physical touch. Indeed, words don't always make adequate tools for communicating our feelings. Far more can be said by a heartfelt hug or squeeze on the shoulder after a friend suffers the loss of a relative than through words.

In the same way, one's love and desire for a partner can be conveyed with a seductive stroke far more effectively than even the words "I want you" ever could. Indeed, Dunbar writes, "the physical stimulation of touch tells us more about the inner feelings of the 'groomer', and in a more direct way" than words are able. And those forms of touch stimulate within us the same endorphin release that chimpanzees enjoy during social grooming.

Some scientists have even gone as far as calling the skin a "social organ". This makes good intuitive sense: we both crave touch and are repulsed by it when it is unwanted, uninvited, or inappropriate. Even simple, brief touches on a hand or arm can have tremendous effects. India Morrison and colleagues at Goteborg University, in Sweden, have presented a laundry list of such findings. Hand-on-hand touches by librarians and salespersons have, for example, been found to lead to more favourable impressions of libraries and shops. People perceive others as more attractive following even a simple, non-sexual touch, and as a result are more likely to act altruistically by returning change left in a pay phone, giving bigger tips in restaurants, or giving away a cigarette to a stranger.

And yet these effects might be thought of as simple parlour tricks compared to the power that touch has between lovers, or between parents and their children.

In one study, US psychologists investigated social grooming in humans by asking participants to indicate their closest emotional relationship and report behaviours such as running their fingers through the person’s hair, wiping away their tears, scratching their back and non-sexual massage. They found levels of relationship satisfaction and trust were both positively correlated with self-reported grooming frequency among romantic partners. And one finding hinted at a causal relationship: people who were more anxious about their relationships "groomed" their partners more often than those who felt more secure with their partners, suggesting that grooming may serve to reduce relationship-related anxiety and to promote the development of romantic bonds. The pattern was true both for men and women.

Babies also crave touch. It has long been known among animal behaviour researchers that physical contact is critical for proper social and emotional development. When developmental psychologist Harry Harlow deprived infant rhesus monkeys of access to a monkey mother in his 1950s experiments at the University of Wisconsin-Madison, they became withdrawn, depressed, and anxious. They refused food, and entered into what he called a "state of emotional shock." When allowed access to a surrogate mother, the infant monkeys overwhelmingly chose the tactile sensations provided by a doll covered by terry cloth over a wire doll that provided food and water. The young monkeys preferred the comfort of even an inanimate mother's touch to physical sustenance.

More recent research with rats replicates Harlow's early findings. Canadian researchers found that when infant rats were licked and groomed more by their mothers, they grew up to be relatively well adjusted. But their counterparts who were deprived of grooming often grew up, like Harlow's monkeys, to be anxious and fearful. Touch-deprived rats also had weakened immune systems. It appears as if touch helps to maintain not only social and emotional health, but also physical health.

According to the World Health Organization, more than 20 million infants each year are born pre-term, which means that they weigh less than 5lb 8oz (2.5kg) upon birth. These babies have increased risk of death in the first few weeks of life. Caring for low-birth-weight infants in hospitals is expensive and requires highly skilled personnel, however research suggests a therapy called kangaroo care is both cheaper and just as effective. Originally developed in Bogota, Colombia, as a way of keeping preterm infants warm in overcrowded nurseries, the practice is deceptively simple. The mother or father simply has to repeatedly place their baby against their bare chest, ideally for prolonged periods.

A meta-analysis of three randomised control trials (the gold standard in biomedical research), conducted in Colombia, Bangladesh, Ethiopia, Indonesia and Mexico found that babies born weighing 4lb 6oz (2kg) or less given kangaroo care in the first week of life were 51% less likely to die in the first four weeks after birth, compared with infants who received standard care.

Other research has found that kangaroo care helps to stabilise preterm infants' vital signs, maintains adequate oxygen levels in the blood, and helps them to sleep better. It also reduces crying, increases weight gain, and allows preterm infants to spend fewer days in incubators, ultimately allowing them to be discharged from neonatal intensive care units sooner than those who are treated with conventional care.

All primates, from monkey to man, rely on social touch. Among non-human primates, grooming is a tool used to garner favours, earn social standing, and increase access to resources. Gossip may have replaced parasite removal as a mechanism for defining and enhancing one's place in human society, but the desire to be touched is carved so deeply within our primate heritage that it remained even as we shed our fur. For an infant born prematurely, social touch can literally mean the difference between life and death. For the rest of us, being touched simply reminds us that we are loved. 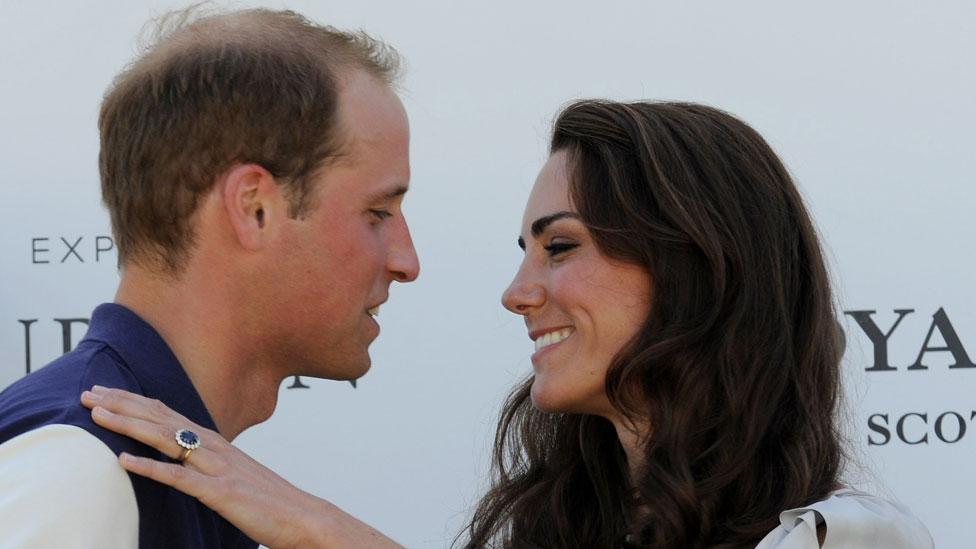 Human physical and social contact has a lot more in common with animal grooming activities than we may think. (Copyright: Getty Images)

Human physical and social contact has a lot more in common with animal grooming activities than we may think. (Copyright: Getty Images) 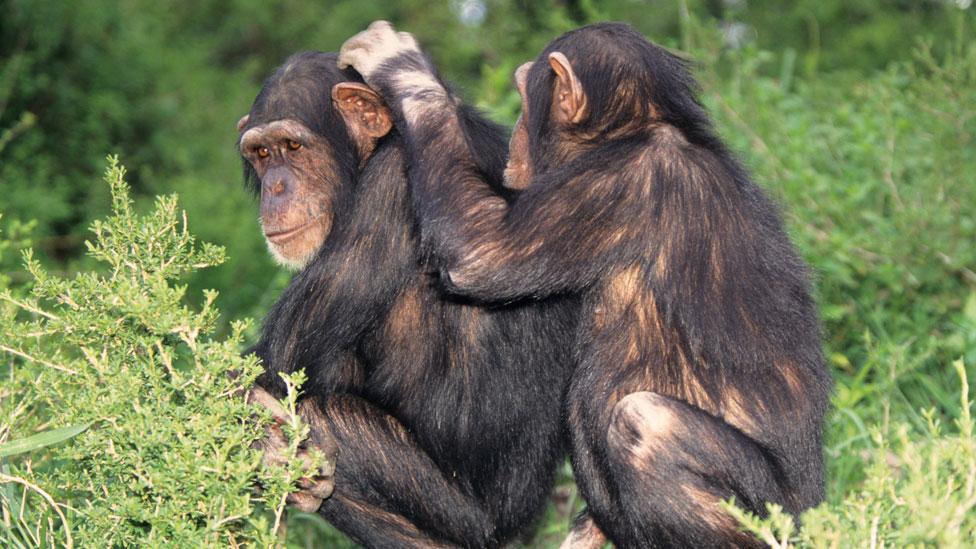 Chimpanzees picking through their friends' fur are not just doing it for hygiene sake, this so-called “allogrooming” has far greater significance. (Copyright: Thinkstock)

Chimpanzees picking through their friends' fur are not just doing it for hygiene sake, this so-called “allogrooming” has far greater significance. (Copyright: Thinkstock) 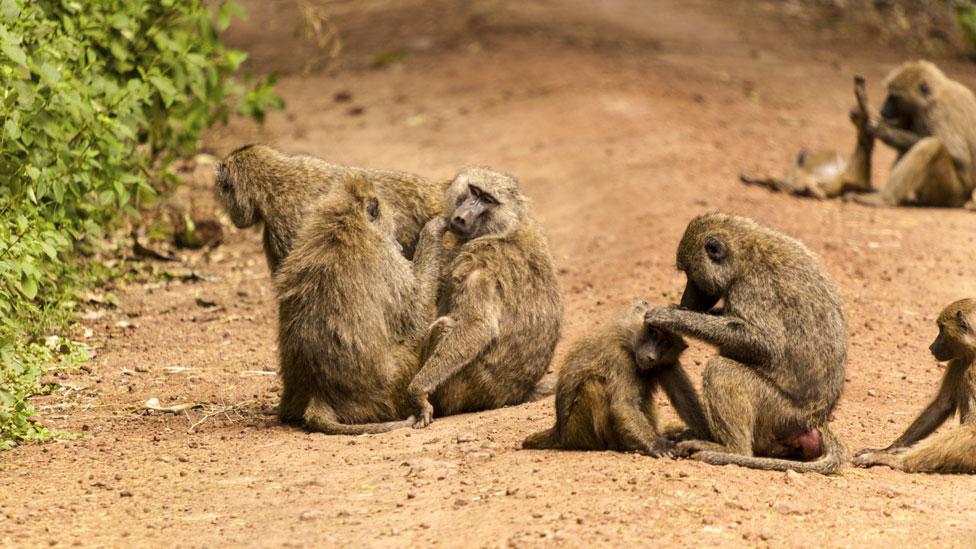 One theory is that grooming stimulates the release of endorphins, which trigger feelings of relaxation. (Copyright: Science Photo Library)

One theory is that grooming stimulates the release of endorphins, which trigger feelings of relaxation. (Copyright: Science Photo Library) 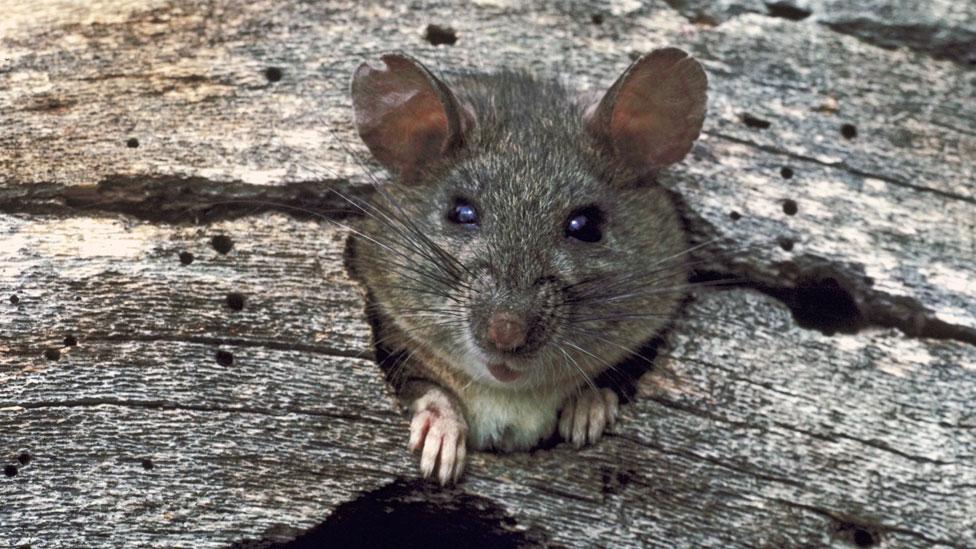 Researchers have found infant rats groomed by their mothers grew up to be more well-adjusted than infants who received less. (Copyright: Thinkstock)

Researchers have found infant rats groomed by their mothers grew up to be more well-adjusted than infants who received less. (Copyright: Thinkstock) 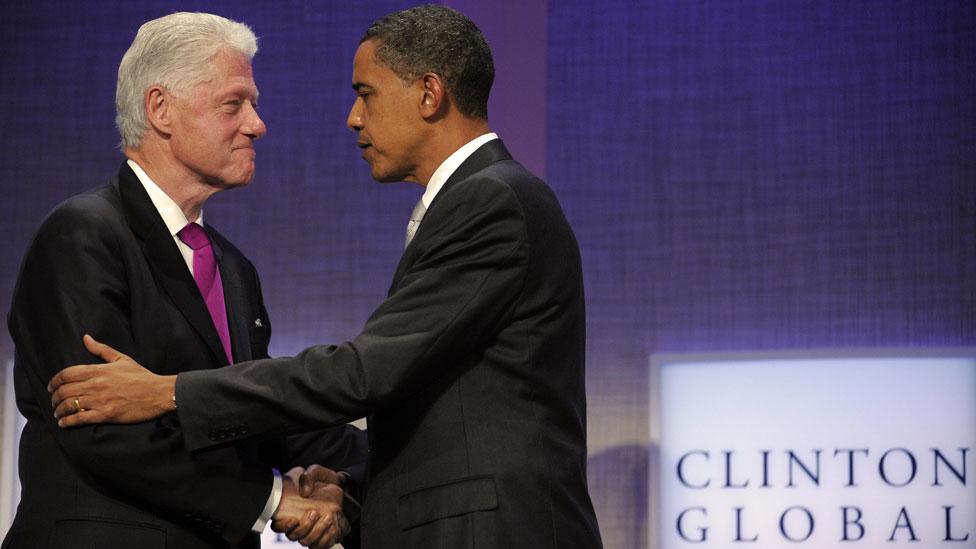 Brief touches on a hand or arm can have noticeable effects on us, leading to more favourable impressions of each other. (Copyright: Getty Images)

Brief touches on a hand or arm can have noticeable effects on us, leading to more favourable impressions of each other. (Copyright: Getty Images) 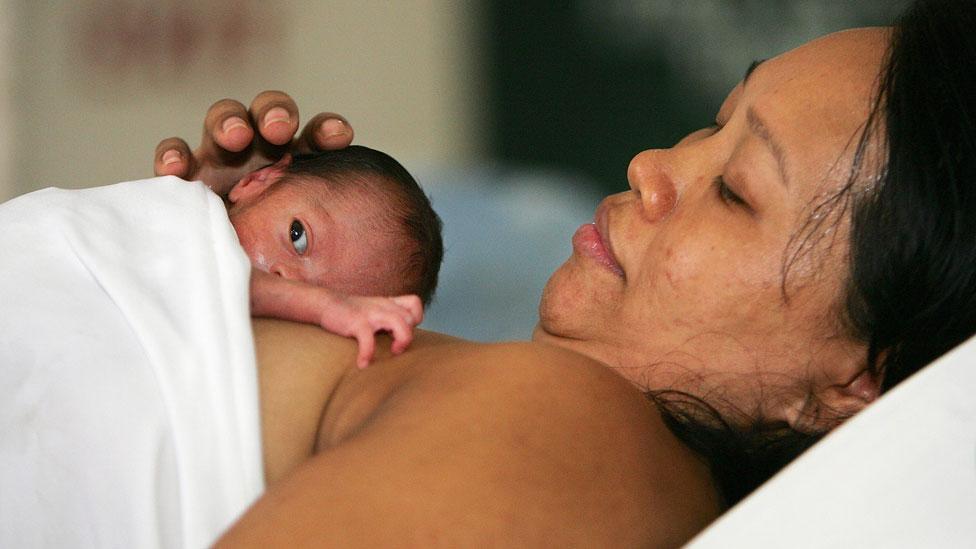 Social touch could also save lives. Kangaroo care, or holding a premature baby on the bare chest has been shown to help survival rates. (Copyright: Getty Images)

Social touch could also save lives. Kangaroo care, or holding a premature baby on the bare chest has been shown to help survival rates. (Copyright: Getty Images)

Science & Environment
1Do all animals need sleep?
Future Thinking
2Decoding the language of dolphins
Uniquely Human
3The wilder side of sex
Uniquely Human
4Can animals imagine?
Around the BBC