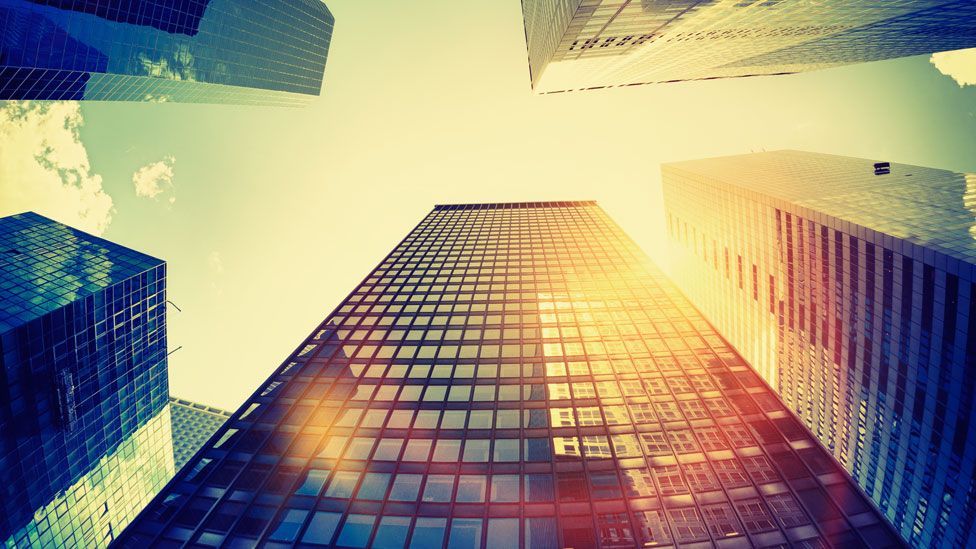 By Frank Swain 2nd December 2013
Hidden in our streets and buildings are "unpleasant designs" that force us to make certain choices, discovers Frank Swain. Once you know what they are, it will transform how you see your city.
W

When Selena Savic walks down a city street, she sees it differently to most people. Whereas other designers might admire the architecture, Savic sees a host of hidden tricks intended to manipulate our behaviour and choices without us realising – from benches that are deliberately uncomfortable to sculptures that keep certain citizens away.

Modern cities are rife with these “unpleasant designs”, says Savic, a PhD student at the Ecole Polytechnique Federerale de Lausanne in Switzerland, who co-authored a book on the subject this year. Once you know these secret tricks are there, it will transform how you see your surroundings. “We call this a silent agent,” says Savic. “These designs are hidden, or not apparent to people they don’t target.” Are you aware of how your city is manipulating you?

While Moses’ politics were objectionable, his methods were undeniably successful, and to this day designers continue to shape the behaviour and the character of urban centres with subtle modifications to the built environment. The method is particularly attractive for combating crime.

In 1999, the UK opened a Design Against Crime research centre, and authorities in Australia and the US have since followed suit. Many of the interventions these groups pioneered are familiar today: such as boundary marks painted around cashpoints to instil an implied privacy zone and prevent “shoulder surfing”.

San Francisco, the birthplace of street skateboarding, was also the first city to design solutions such as “pig’s ears” – metal flanges added to the corner edges of pavements and low walls to deter skateboarders. These periodic bumps along the edge create a barrier that would send a skateboarder tumbling if they tried to jump and slide along.

Indeed, one of the main criticisms of such design is that it aims to exclude already marginalised populations such as youths or the homeless. Unpleasant design, Savic says, “is there to make things pleasant, but for a very particular audience. So in the general case, it’s pleasant for families, but not pleasant for junkies.”

Preventing rough sleeping is a recurring theme. Any space that someone might lie down in, or even sit too long, is likely to see spikes, railings, stones or bollards added. In the Canadian city of Calgary, authorities covered the ground beneath the Louise Bridge with thousands of bowling ball-sized rocks. This unusual landscaping feature wasn’t for the aesthetic benefit of pedestrians walking along the nearby path, but part of a plan to displace the homeless population that took shelter under the bridge.

In recent years, public benches too have been redesigned – you think that’s just an armrest placed right in the middle of the bench? It’s also to stop somebody sleeping there.

The Camden Bench – named after the UK local council that devised it – is a masterpiece in unpleasant design. The amorphous slab of concrete is made from a material that resist posters, stickers and graffiti, it has a ridged peak and sloped surface that prevents sleeping, and its makers even claim the bench deters litterers and drug dealers by not providing any crevices to shove things. Comfort is not one of its top features though – you have to perch on a sloped seat and there’s no backrest.

In other places, adding deliberate discomfort proves a clever design trick to get people to do certain things. A famous (if apocryphal) story circulates in design circles that the plastic chairs in McDonalds are engineered to be comfortable for a maximum of 15 minutes to keep tables free. A more overt move is to remove chairs altogether. London Heathrow’s Terminal 5 has just 700 seats for the estimated 35 million travellers a year passing through its gates. For most of these weary globetrotters, the only place to sit down is in one of the 25 airport restaurants – with obvious benefits to their revenues.

Similarly, escalators in multi-level shopping malls or department stores are often deliberately positioned so that you must walk past more shops to ascend each floor.

One of the problems with these designs, says Savic, is their implacability. “They are non-negotiable. If you have a policeman prohibiting people to sit somewhere, you can still fight with this policeman, or argue with him, you can do things. When you have a bench that has armour, you can’t really as a human do anything about it.”

Anna Minton, author of Fortress Britain, points out that many of these non-negotiable designs are in fact shortgaps to fill in for the disappearance of benign authority figures in public spaces, such as bus conductors and park wardens.

Faced with this hostile architecture, what can city dwellers do to reclaim their streets? A few designers have come up with playful ideas to make their city more comfortable. At first glance their creations are almost silly, but they’re based on the serious point that unpleasant design can create exclusions in a city, and divisions between the rich and poor.

One German artist, Oliver Schau, devised a simple solution to reclaim the unforgiving architecture of Hamburg, by wrapping bright yellow flexible plastic pipe around bicycle racks and bridge struts to create impromptu resting places that would be impossible to sit on otherwise.

Similarly, Sarah Ross in the US came up with the “archisuit”, an all-in-one outfit with tactically-placed cushions to turn even the most unpleasant design into a comfortable resting place. “It’s supposed to be ridiculous and funny, and point to the ridiculousness of aggressive architecture,” says Ross. “These are laughable design solutions to actual real problems that have nothing to do with architecture and everything to do with the social safety net.”

As far as Savic is concerned, any efforts that highlight the invisible unpleasant design features are a good thing. “We want to draw attention to this potentially dangerous approach and make it somehow familiar,” she says.

So next time you’re walking down the street, take a closer look at that bench or bus shelter. It may be trying to change the way you behave. 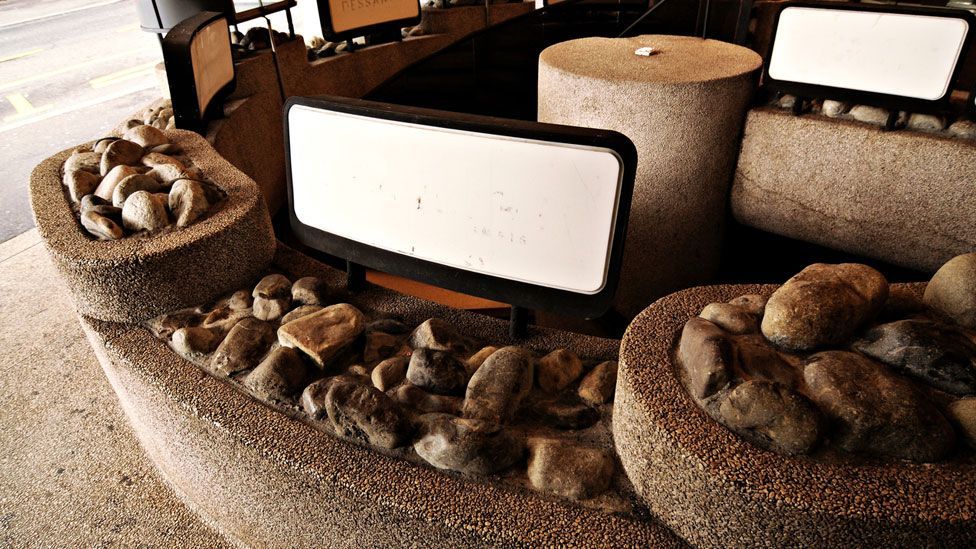 A wall that would be perfect to sit for a rest, if it wasn't for those rocks. (Selena Savic)

A wall that would be perfect to sit for a rest, if it wasn't for those rocks. (Selena Savic) 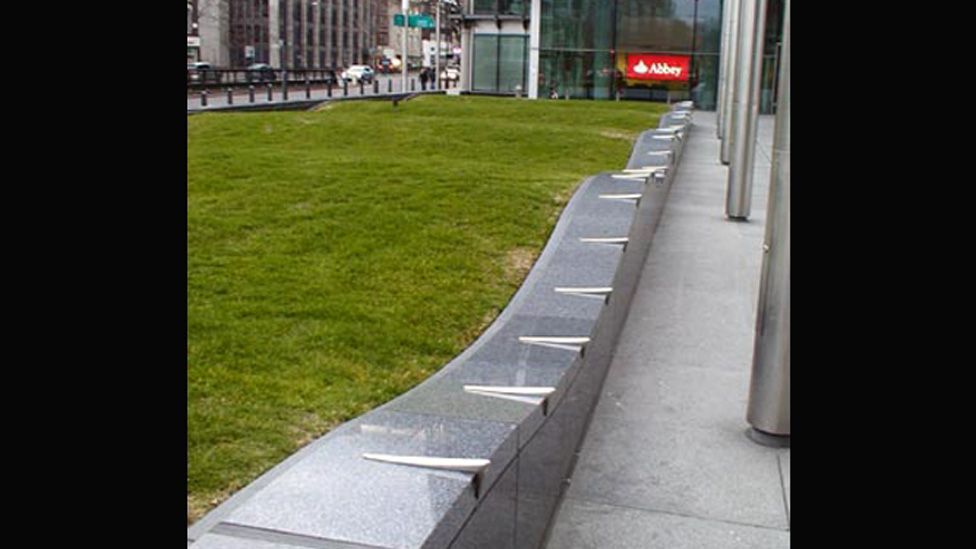 Metal "pig's ears" on a low wall in London were placed there to prevent skateboarders from sliding along the corner edge. (Dan Lockton)

Metal "pig's ears" on a low wall in London were placed there to prevent skateboarders from sliding along the corner edge. (Dan Lockton) 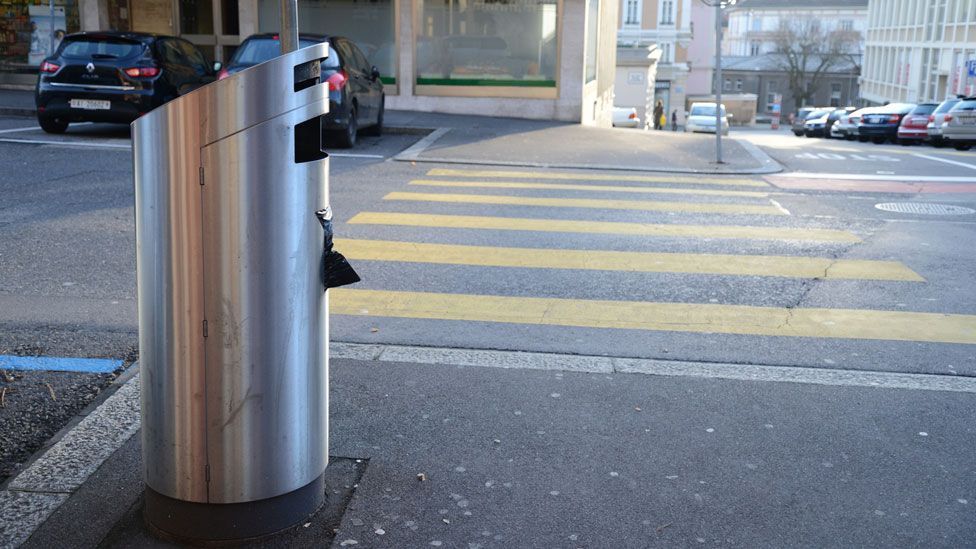 The opening to these bins in Switzerland is deliberately small to discourage large items. (Selena Savic)

The opening to these bins in Switzerland is deliberately small to discourage large items. (Selena Savic) 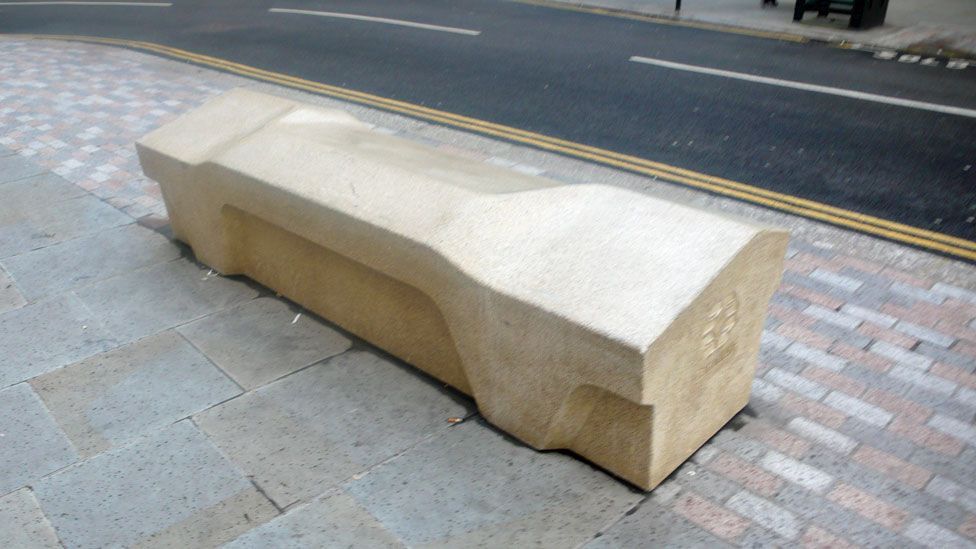 This bench in Camden, London has a ridged top to prevent rough sleeping. It also has no alcoves, which its makers claim discourages the hiding of drugs. (Sam Jacob)

This bench in Camden, London has a ridged top to prevent rough sleeping. It also has no alcoves, which its makers claim discourages the hiding of drugs. (Sam Jacob) 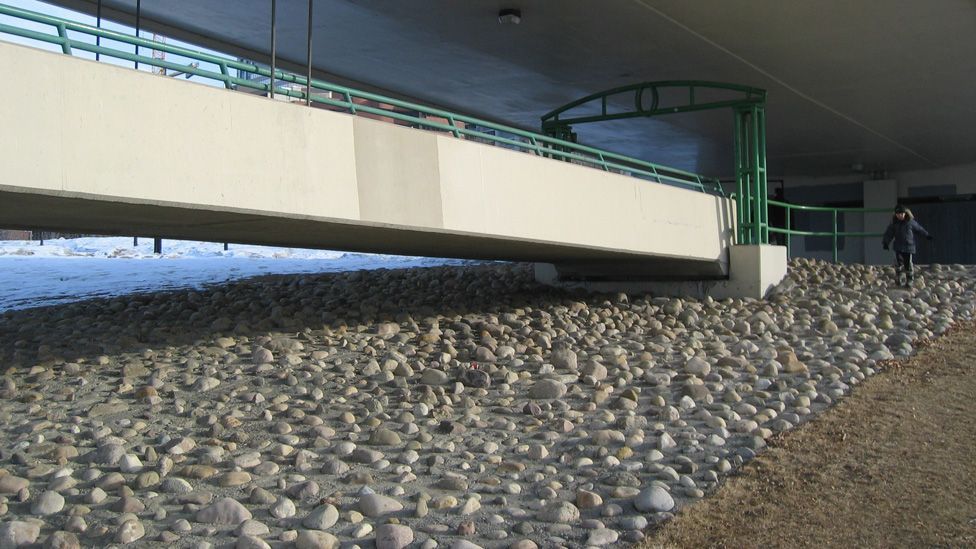 Uneven boulders were added to the space under this bridge in Calgary, Canada to force out the homeless sheltering there. (Marian Doerk)

Uneven boulders were added to the space under this bridge in Calgary, Canada to force out the homeless sheltering there. (Marian Doerk) 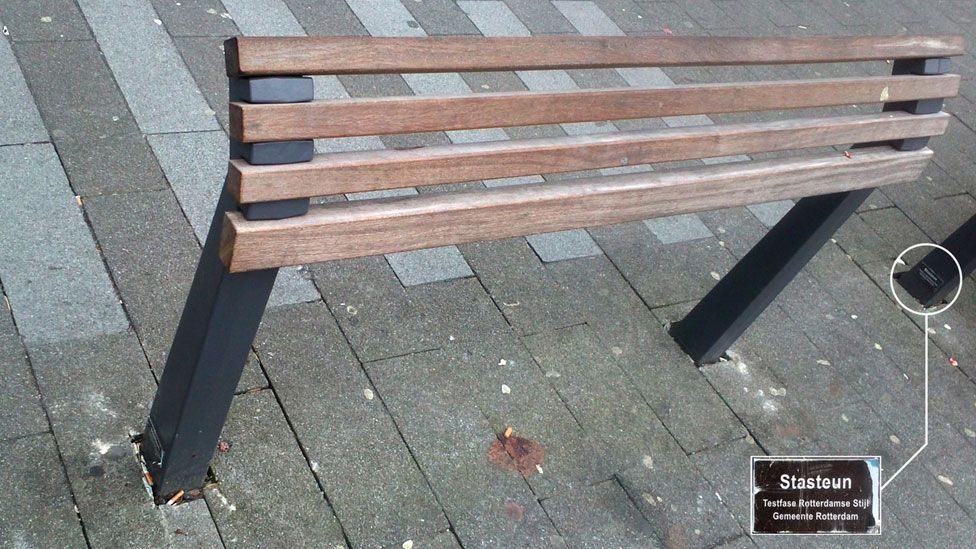 A bench in Rotterdam that discourages citizens staying for too long. (Selena Savic)

A bench in Rotterdam that discourages citizens staying for too long. (Selena Savic) 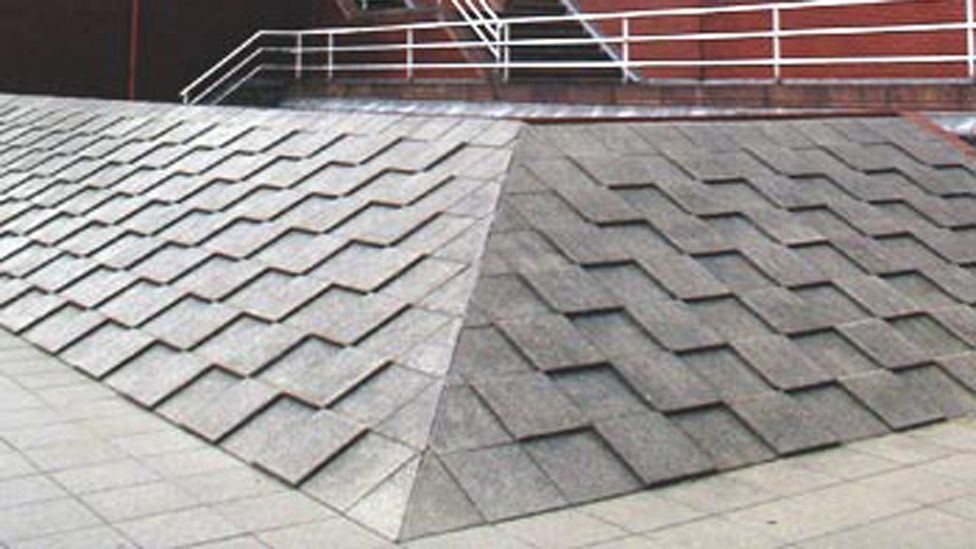 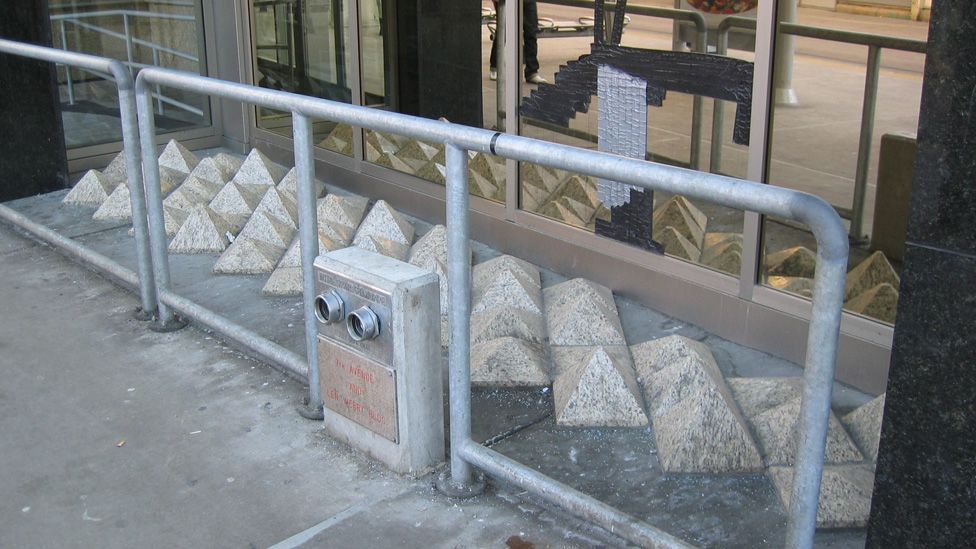 Decorative blocks placed in this window in Canada also prevent people from sitting or sleeping there. (Marian Doerk)

Decorative blocks placed in this window in Canada also prevent people from sitting or sleeping there. (Marian Doerk) 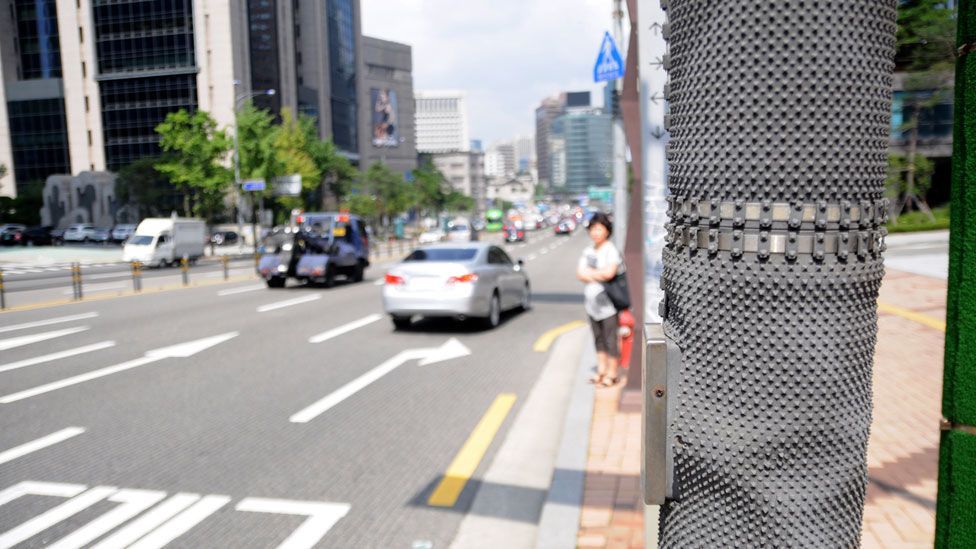 A sheath placed on a post to prevent anybody placing stickers or posters there. (Selena Savic)

A sheath placed on a post to prevent anybody placing stickers or posters there. (Selena Savic)

Technology
1Your local neighbourhood in 2050
Science & Environment
2Green wonder: Your park in 2050
Technology
3Smarter cities, smarter future
Technology
4Birth of the mile-high building
Around the BBC