Loading
Under the Radar | Space
Could we harness power from black holes?
Share using EmailShare on TwitterShare on FacebookShare on LinkedinShare on Whatsapp 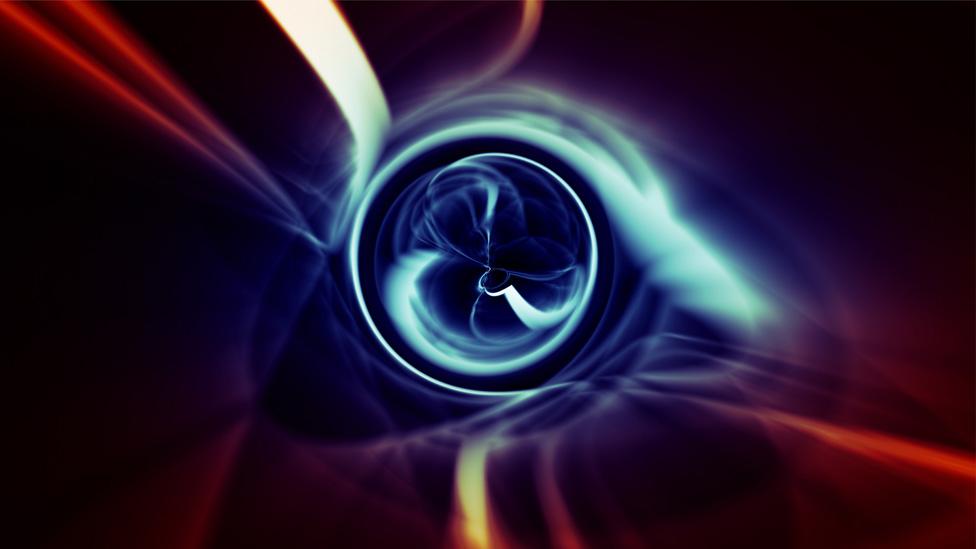 By Philip Ball 3rd December 2013
It might seem like an absurd idea, but physicists have long pondered whether black holes could one day be tapped for energy, says Phil Ball. But how possible is it?
I

Imagine the scene: highly advanced civilisations get enormous amounts of energy from black holes, be it extracting it from collapsed stars or making artificial mini-holes that power spaceships. How feasible might it actually be to tap these cosmic behemoths for power one day? Clearly, it's far, far beyond current technology – but pesky details like physical restrictions haven’t stopped theoretical physicists from exploring the question.

Black holes are stars that have burnt out and collapsed under their own gravity to an infinitesimally small point in space – a singularity. Inside the so-called event horizon, even light is trapped by a huge gravitational pull. So black holes were once thought of as barren plugholes, where nothing could escape – as energy drains rather than energy sources.

But that view evolved once Stephen Hawking and others brought quantum physics into the mix. Hawking showed in the 1970s that black holes should emit energy from their boundaries in the form of radiation produced by quantum fluctuations of empty space itself. Eventually the black hole radiates itself away – it evaporates.

This radiation is emitted very slowly, however. Might it be possible to induce a black hole to release all its Hawking radiation sooner, so that in effect it becomes like a ball of fuel? That’s not idle or quasi-magical speculation, for physicists have believed for at least 30 years that it might be possible.

In 1983 physicists George Unruh and Robert Wald suggested lowering some form of energy-collecting device – we can think of it simply as a “box” for capturing radiation – from a distant point to close to the hole’s event horizon, where it would fill up with Hawking radiation. You could then bring it back up again, just like filling a bucket with water from a well.

Performed repeatedly, this manoeuvre would gradually strip the black hole of its “hot atmosphere” of radiation. Unruh and Wald estimated that in principle more energy can be extracted per second from a single black hole than is radiated from all the ordinary stars in the observable universe. True, you’d need a mighty rope and winding mechanism to prevent the box from being tugged beyond the event horizon and swallowed. But, in theory, physicists said it could be done.

Or can it? The problem, says Adam Brown of the Princeton Center for Theoretical Science in the journal Physical Review Letters, lies with the plain old mechanics of the rope holding the box. Because it would be in a gravitational field, the rope would be subject to the inevitable constraint that it can’t be heavier than its own strength can support.

For an ordinary rope hanging down in the Earth’s gravity, the tension in the rope increases with height, because it is carrying more of its own weight. Weirdly, in a very strong gravitational field, where spacetime itself is highly curved, the tension remains the same all along the length. However, Brown’s calculations show that the rope could only just support its own mass without breaking, and so could not bear the additional mass of a box.

Another constraint on the rope is that it mustn’t simply disintegrate. Close to a black hole, the intense Hawking radiation creates a hot environment. If the rope is lowered too close to the event horizon, where the radiation is most plentiful, there’s a danger that the temperature will exceed that at which all ordinary matter – in other words, atoms themselves – melts into a gloop of constituent quarks. If you make the rope too light, it’s more likely to melt.

There’s another complication too. Brown shows that the box itself would have to be tiny, otherwise it will be pulled awry, causing the rope to break. To collect Hawking radiation of the wavelength of light, for example, the boxes would need to be no bigger than typical bacteria.

So here’s the deal. If you get too close to the black hole, the rope might melt or snap – or, if it’s made too massive to avoid that, it might collapse into itself. But if you try mining at a more cautious distance, there isn’t so much Hawking radiation there to collect. And Brown shows that even the best compromise makes energy extraction much slower than Unruh and Wald suggested.

Yet there is a marginally better way, he says: do away with boxes altogether. In 1994, Albion Lawrence and Emil Martinec of the University of Chicago proposed that one could simply dip “strings” into a black hole and let Hawking radiation run up them like oil up the wick of an oil lamp. This was thought to be a slower process than hauling up boxes full of Hawking radiation. But Brown’s analysis shows that they would in fact both mine the hole at the same slow rate. Since dangling boxes introduce more potential for malfunction, Brown therefore argues that the preferable way to draw the energy from black holes is to puncture the event horizon with lots of radiation-wicking strings, and let them drain it out of existence. The dreams of theoretical physicists may live on.

Under the Radar
1Bored? Hunt for some dark matter
Science & Environment
2The ‘Very Large’ Hadron Collider
Will We Ever?
3What came before the Big Bang?
Will We Ever?
4Will we ever create a black hole?
Around the BBC