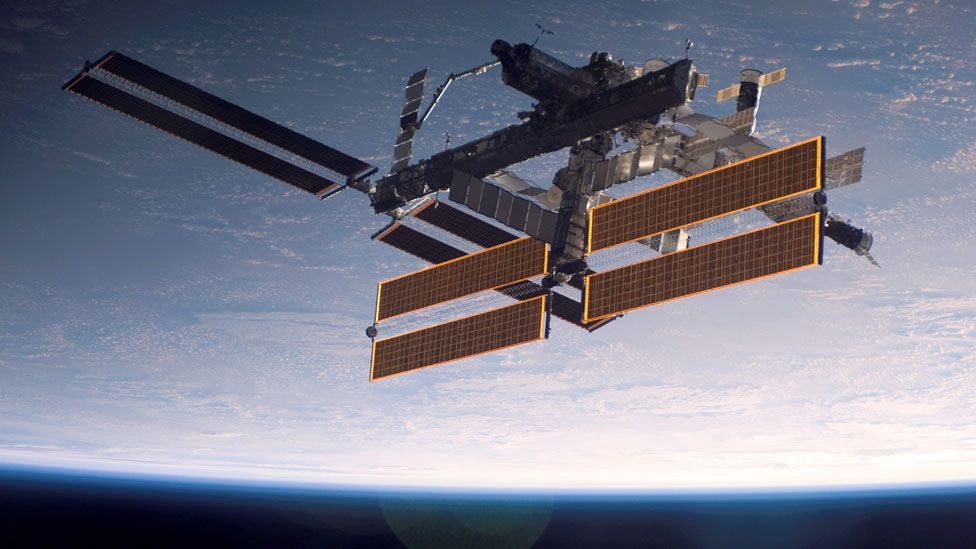 By Richard Hollingham 16th December 2013
Astronauts reveal what festive celebrations are like in orbit, why Velcro is crucial at dinnertime, and why space stations and alcohol do not mix.

25 December 2010. The day Santa Claus surprised not only children around the world, but also astronauts on board the International Space Station (ISS). In the American section of the station, European Space Agency (ESA) Paolo Nespoli was the first to wake. He opened the door of his sleeping compartment to discover a sock attached to the handle, filled with gifts.

“I still remember how startled I was when I opened the door and saw the package there,” Nespoli recalls. “As the others woke and opened their doors, we looked at each other and realised none of us had brought these into orbit.”

This wasn’t the first time that Father Christmas had apparently visited space. The earliest recorded Santa sighting came during the missions of Gemini 6 and 7 in December 1965. Shortly after a rendezvous between the two spacecraft in orbit, Gemini 6 astronaut Thomas Stafford reported seeing “a satellite going from north to south, probably in a polar orbit.”

“Looks like he might be going to re-enter soon,” Stafford informed an increasingly anxious mission control. “Stand by…you might just let me try to pick up that thing.”

Then, over the radio, came the strains of Jingle Bells performed by Stafford and his fellow crewmember, Wally Schirra, on sleigh bells and harmonica – the first musical instruments ever smuggled into space (for more space music firsts see here).

Christmas has always been important to American astronauts, particularly to the many who have been religious. The most overt expression of this came during the Apollo 8 mission, 45 years ago, when the first humans orbited the Moon. On Christmas Eve 1968, after witnessing the blue marble of Earth rise above the desolate lunar landscape, Frank Borman, Jim Lovell and Bill Anders broadcast live to the home planet from lunar orbit. Nasa had not prepared anything for them to say and left it up to the crew. They read – in turn – from the book of Genesis, and Borman concluded the broadcast with: “good night, good luck, a Merry Christmas, and God bless all of you – all of you on the good Earth.”

Even to non-believers, the Bible reading was incredibly powerful, but not without controversy. Nasa was later taken to court by a prominent atheist for introducing religion into a government programme. The case was thrown out by the United States Supreme Court, citing the fact that the government had no jurisdiction over something that happened in lunar orbit.

Today, despite the variety of cultures represented on board the ISS – which might include European, American, Japanese or Russian – 25 December has become a traditional holiday in space. Apart from any essential maintenance, crewmembers have most of the day off and will gather for a festive meal in the social hub of the ISS, the Russian service module. This section even boasts a table, which is covered in Velcro to hold everything down.

Some crews opt for the space-equivalent of an Earth Christmas meal and tuck into sliced turkey, reconstituted potatoes and processed vegetables. But this can be cloyingly bland and Nespoli recalls that he chose tortellini, barbeque steaks, and vegetables instead. They are also allowed extra treats from home such as chocolate, cookies or nuts. Although anything particularly crumbly has a tendency to clog the air conditioning ducts.

After that the crew might play music, watch a movie or call friends and family on the ground. “You’re sad that you can’t be with family and friends but, at the same time, you recognise the uniqueness of the situation,” says Nespoli. “Being able to call people from space and wish them merry Christmas is very special.”

The station is even equipped with Christmas decorations and a two-foot-tall fire-proofed artificial tree to deck the halls. Although it can be a struggle to locate them. “It’s the same as at home, when you know you’ve put them somewhere and you can never find them,” says Nespoli. “When I was looking for some piece of technical equipment, I found a box that said Christmas decorations. I made sure I recorded in our inventory management system exactly where they were.”

For many astronauts, their Christmas in space is the first time they have had the day off for several years. Nespoli attributes this to the uncanny knack his trainers had of identifying national holidays and making sure the astronauts were elsewhere. “On the 4th of July in the States, they send you to Moscow to do training and when it’s the Russian holiday they send you to the United States,” he says. “If you’re not careful you find yourself training in Star City [near Moscow] on Christmas Day.”

With all the festive bling, outfits and presents, how different is it having Christmas in space? For Nespoli, it was the real giant bauble in the window on Christmas Eve that was the true highlight. “On 24th December, we passed north of France and I saw the whole UK and Ireland lit up like a Christmas tree – my Christmas tree from space was the whole UK.”

One of the few things they cannot celebrate with on board the ISS – despite what you might gather from the movie Gravity – is alcohol. Although there have been rumours for years that the Russians have a secret stash of vodka on the ISS, this is extremely unlikely. “I never saw any alcohol on board,” says Nespoli. This is because the water processing system on the ISS, which recycles drinking water from the astronauts’ breath, sweat and urine, would be overwhelmed if any alcohol got into the plumbing.  “If you took up alcohol you would be caught,” says Nespoli. “There is even a limit to the amount of disinfecting towels you can use because of fears of overwhelming the water system.”

So, what about those presents hanging on the doors of the astronaut quarters that Christmas morning? Is there really a cosmic Santa? The secret is revealed by another ISS astronaut, Andre Kuipers, who arrived at the station a year after Nespoli.

“There were also personalised socks waiting for us, filled with presents from our loved ones that had stayed behind on Earth,” Kuipers tells me in an email. “They had put these presents together in April, way before our arrival, to send up with a cargo ship…it was great!” 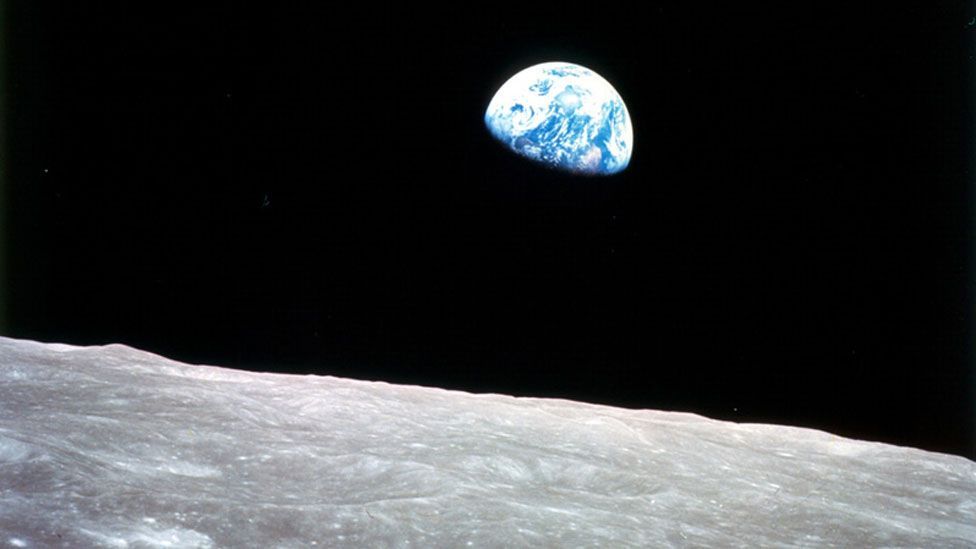 Since the iconic Earthrise at Christmas photo was taken by the Apollo 8 crew in 1968, the festive season has been entwined with space.

Since the iconic Earthrise at Christmas photo was taken by the Apollo 8 crew in 1968, the festive season has been entwined with space. 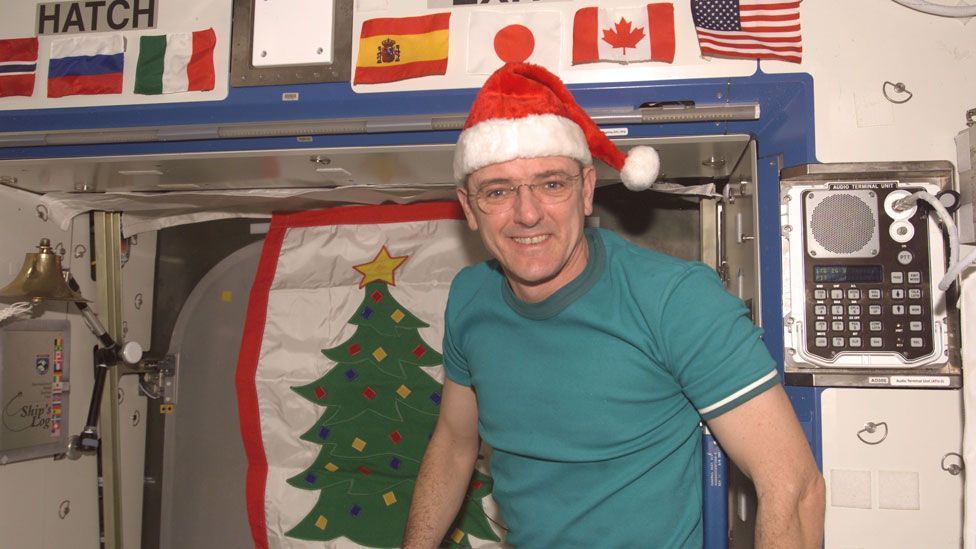 The 25 December has become a traditional holiday on the International Space Station. (Nasa)

The 25 December has become a traditional holiday on the International Space Station. (Nasa) 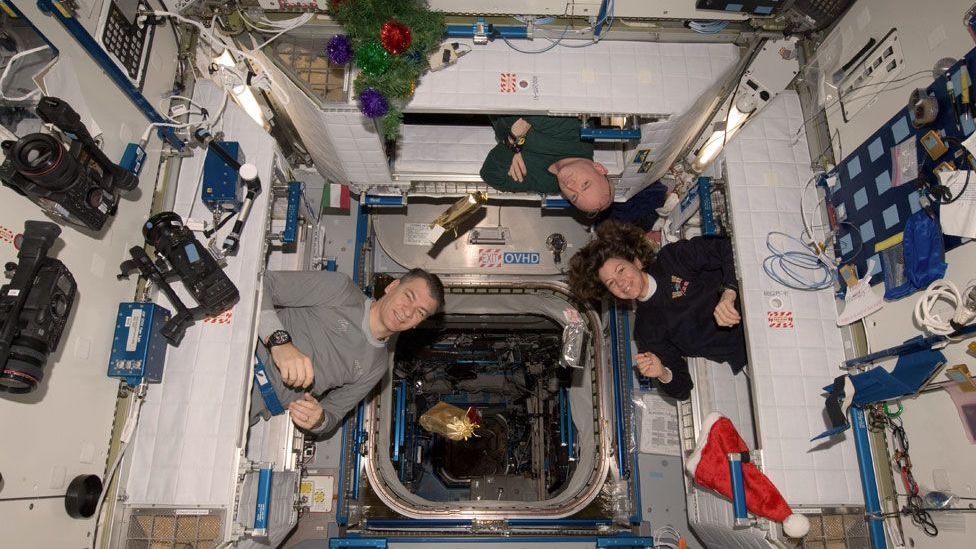 On the Christmas morning Paolo Nespoli (left) was on the ISS, the crew were surprised with presents. (Nasa)

On the Christmas morning Paolo Nespoli (left) was on the ISS, the crew were surprised with presents. (Nasa) 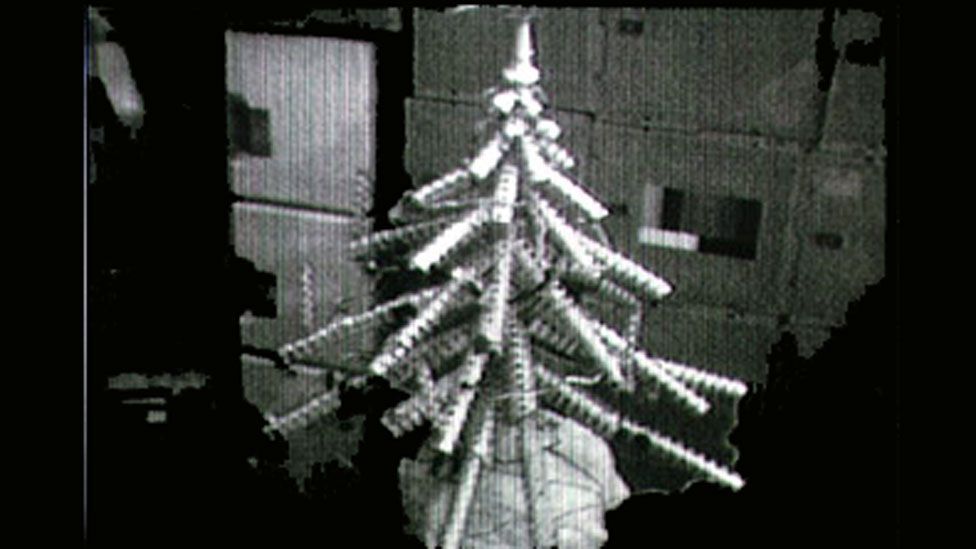 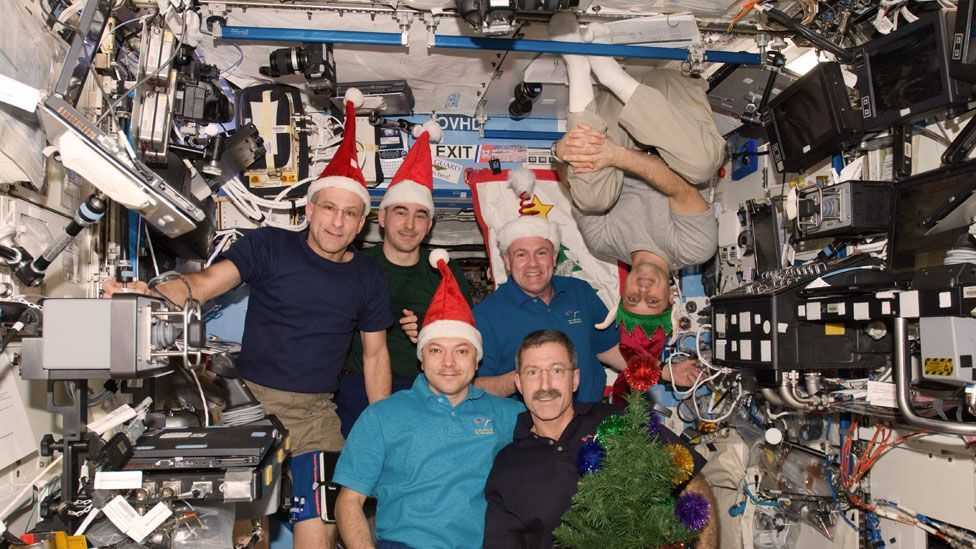 The Expedition 30 crew members indulge in a little Christmas fun for the camera. (Nasa)

The Expedition 30 crew members indulge in a little Christmas fun for the camera. (Nasa) 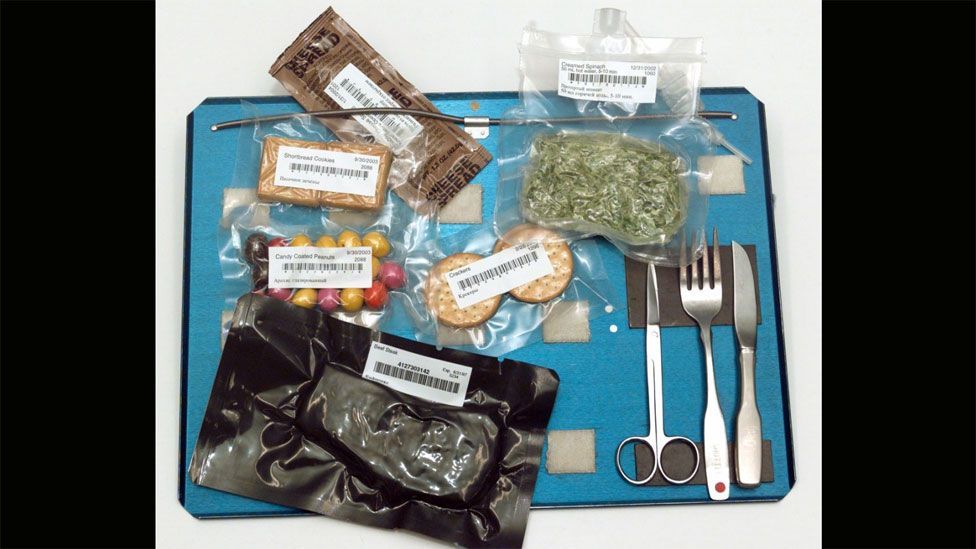 Velcro is vital for the Christmas meal, it keeps the food and utensils on astronauts' trays. (Nasa)

Velcro is vital for the Christmas meal, it keeps the food and utensils on astronauts' trays. (Nasa)