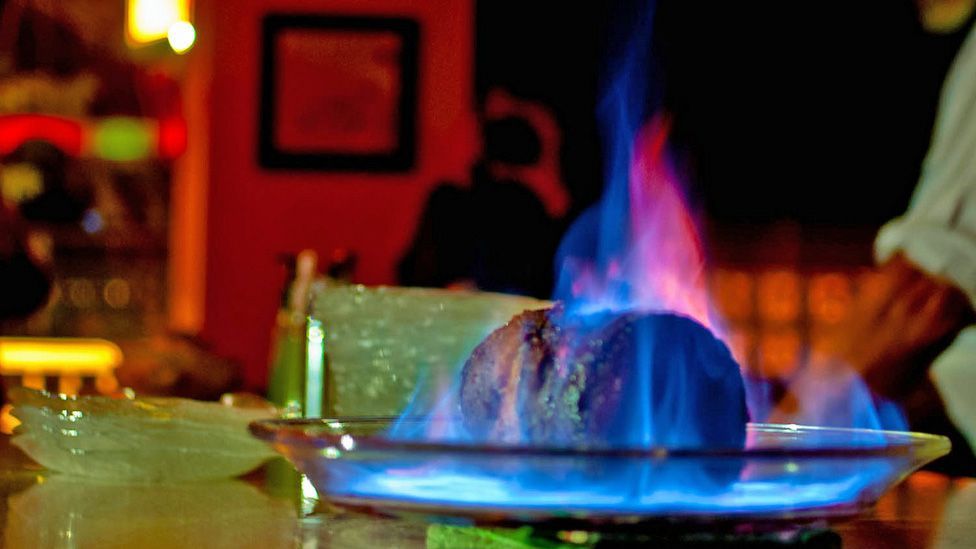 By Tom Stafford 23rd December 2013
Pulling crackers, clinking glasses, or setting puddings on fire – mere traditions or more important? Tom Stafford explains that rituals may date back to early human history, and can even change the flavour of food.
A

All of us carry out rituals in our daily lives, whether it is shaking hands or clinking glasses before we drink. At this time of year, the performance of customs and traditions is widespread – from sharing crackers, to pulling the wishbone on the turkey and lighting the Christmas pudding.

These rituals might seem like light-hearted traditions, but I'm going to try and persuade you that they are echoes of our evolutionary history, something which can tell us about how humans came to relate to each other before we had language. And the story starts by exploring how rituals can make our food much tastier.

In recent years, studies have suggested that performing small rituals can influence people’s enjoyment of what they eat. In one experiment, Kathleen Vohs from the University of Minnesota and colleagues explored how ritual affected people’s experience of eating a chocolate bar. Half of the people in the study were instructed to relax for a moment and then eat the chocolate bar as they normally would. The other half were given a simple ritual to perform, which involved breaking the chocolate bar in half while it was still inside its wrapper, and then unwrapping each half and eating it in turn.

This experiment shows that a small act can significantly increase the value we get from a simple food experience. Vohs and colleagues went on to test the next obvious question – how exactly do rituals work this magic? Repeating the experiment, they asked participants to describe and rate the act of eating the chocolate bar. Was it fun? Boring? Interesting? This seemed to be a critical variable – those participants who were made to perform the ritual rated the experience as more fun, less boring and more interesting. Detailed analysis showed that this was the reason they enjoyed the chocolate more, and were more willing to pay extra.

So, rituals appear to make people pay attention to what they are doing, allowing them to concentrate their minds on the positives of a simple pleasure. But could there be more to rituals? Given that they appear in many realms of life that have nothing to do with food –from religious services to presidential inaugurations – could their performance have deeper roots in our evolutionary history? Attempting to answer the question takes us beyond the research I've been discussing so far and into the complex and controversial debate about the evolution of human nature.

In his book, The Symbolic Species, Terrance Deacon claims that ritual played a special role in human evolution, in particular, at the transition point where we began to acquire the building blocks of language.

Deacon's argument is that the very first “symbols” we used to communicate, the things that became the roots of human language, can't have been anything like the words we use so easily and thoughtlessly today. He argues that these first symbols would have been made up of extended, effortful and complex sequences of behaviours performed in a group – in other words, rituals. These symbols were needed because of the way early humans arranged their family groups and, in particular, shared the products of hunting. Early humans needed a way to tell each other who had what responsibilities and which privileges; who was part of the family, and who could share the food, for instance. These ideas are particularly hard to refer to by pointing. Rituals, says Deacon, were the evolutionary answer to the conundrum of connecting human groups and checking they had a shared understanding of how the group worked.

If you buy this evolutionary story – and plenty don't – it gives you a way to understand why exactly our minds might have a weakness for ritual. A small ritual makes food more enjoyable, but why does it have that effect? Deacon's answer is that our love of rituals evolved with our need to share food. Early humans who enjoyed rituals had more offspring. I speculate that an easy shortcut for evolution to find to make us enjoy rituals is by connecting our minds to that the rituals make the food more enjoyable.

So, for those sitting down with family this holiday, don't skip the traditional rituals – sing the songs, pull the crackers, clink the glasses and listen to your uncle repeat his funny anecdotes for the hundredth time. The rituals will help you enjoy the food more, and carry with them an echo of our long history as a species, and all the feasts the tribe shared before there even was Christmas.