Loading
HyperDrive | Sustainability
Can a city really ban cars from its streets?
Share using EmailShare on TwitterShare on FacebookShare on LinkedinShare on Whatsapp 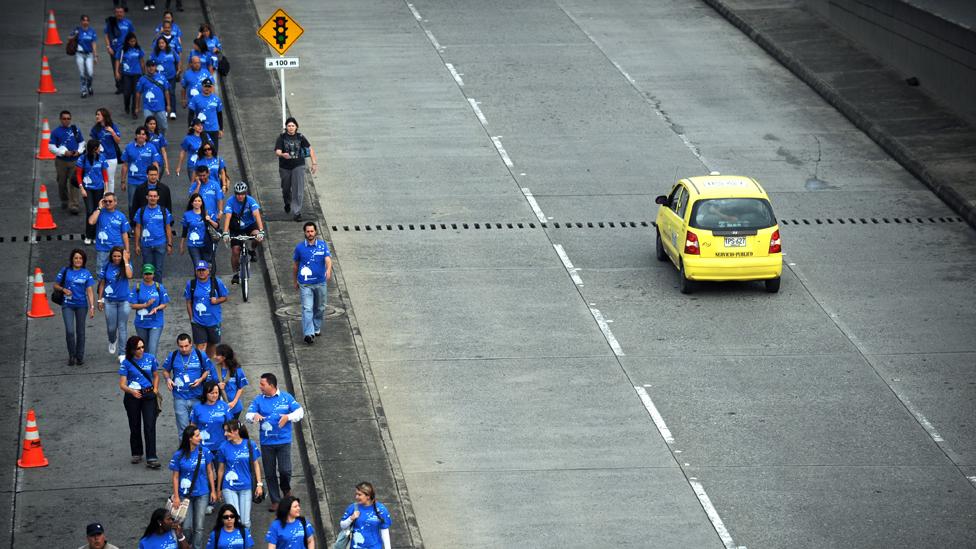 By Jack Stewart 4th February 2014
After decades of car-filled streets, can a modern metropolis really turn its back on the automobile? One city is hoping that it can.
T

The German city of Hamburg has announced plans to become car-free within the next two decades. It is an ambitious idea, but city officials obviously feel that the personal motorcar does not fulfill a function that walking, biking and taking public transport cannot.

The goal of Hamburg’s project is to replace roads with a “gruenes netz” or a green network of interconnected open areas covering 40% of the city. According to the official website, parks, playgrounds, sports fields, allotments and cemeteries will be connected to form a network, which will allow people to navigate through the city without the use of cars.

Banishing the car from urban areas is becoming a common trend in many European cities. London imposes a “congestion charge” on private vehicles entering the city centre during peak hours. The Danish capital Copenhagen is building bicycle superhighways radiating out from the city centre.

These developments combined may make worrying reading for driving enthusiasts. Is the era of the personal car over?

In the century since the Ford Model T was introduced in 1908, global vehicle numbers have swollen to well over a billion. But according to recent research, the growth spurt may have peaked.

Professor Michael Sivak, at the University of Michigan Transportation Research Institute has just published a series of reports looking at car use, and its environmental impact.

His calculations show that “motorisation” in the United States might have reached a peak in 2008, and that the figures have been on the decline since. That holds even when the global economic downturn, and its negative impact on car sales, is taken into account.

Sivak speculates that a number of factors could be contributing to the trend, probably making it more than a passing fad. They include increased telecommuting (or working from home) and the movement of populations back to city centres. In China, Beijing and Shanghai are looking at plans to limit the number of new vehicles being registered to curb growth. It’s a movement more cities are looking towards, particularly in the US. “I think it is fair to use our data to look at similar trends in say, France or England, but I am very careful not to extrapolate this to developing countries,” says Sivak.

However another recent report, from analysts IHS Automotive, states: “Asian and developing market cities will not achieve the levels of car motorisation enjoyed in the West”.

Another way to examine the issue is to look at the number of households without a car. In the United States, the percentage going motor-less is increasing.

“New York, Washington, Boston, Philadelphia, each have more than 30% of households without a light duty vehicle,” says Sivak. In fact, the figures show that 56% of households in New York (which top the list) don’t have a car. “I think that will be surprising to most people. It was surprising to me, and I am in the business.”

Perhaps it is not so surprising in cities like New York, which have extensive public transport networks, and where the costs of parking can far outweigh the cost of a purchase of a subway ticket. But it’s not the full story. In Los Angeles, only 12% of households are car-less, and in affluent San Jose, heart of Silicon Valley, it is only 5.8%.

What impact is this having? In another study by Sivak, he draws a surprising conclusion – flying is actually better than driving, when the amount of energy used is measured. In fact, everything seems better than driving. A long distance train uses 1,668 BTU per person mile. Planes use 2,691, and cars a staggering 4,218. (BTU, or British Thermal Unit, per person mile is a measure of energy used to move a person a mile.)

The balance has shifted since the 1970s, when the energy per person mile was about twice as much for flying than for driving. Now, cramming more people onto planes makes them more efficient per person.

“The load in aircraft, for better or worse, has increased, while the load in cars has decreased,” explains Sivak. “So you are spreading the energy across fewer people in a car.”

To match the emissions levels of flying, the US car fleet needs either to improve from the current 21.5 mpg on average to at least 33.8 mpg, or carry 2.3 people per trip instead of the current 1.38 people says Sivak.

So could Hamburg be a sign of things to come? Sivak offers an analogy.

“I think it’s an interesting target to aim for. I would compare it with a target in the traffic safety domain that was imposed by Sweden about 20 years ago,” he says. “Their goal is to have zero traffic fatalities. Now, nobody expects it zero fatalities on the road any time soon, but it is good to have a target that you are driving towards.”