Living underwater is seen by some as a futuristic utopia, but what’s it actually like? Rose Eveleth asks a man who eats, works and sleeps on the sea floor – the latest in her new series about the people who have already experienced the future.

The first night Deron Burkepile spent underwater was over 10 years ago, but the memory is still fresh in his mind. He remembers getting suited up — a couple of scuba tanks on his back, extra safety gear hanging from his rig—and stepping to the back of the boat.  “You’re used to getting off the boat and coming back in an hour, maybe two at most,” he says. “So you’re thinking, wow, I’m not going to see the sun again for almost two weeks.”

After their dive, rather than going back to the boat, Burkepile and three fellow marine biologists swam on to the Aquarius underwater lab, 63ft below sea level in the Florida Keys Marine Sanctuary. “It’s getting kind of dark,” he remembers, “and the sun is going down, and you’re swimming up to Aquarius which has lights all over the outside. Essentially it’s just silhouetted by these big spotlights. It’s just one of the coolest experiences underwater that I’ve ever had.” 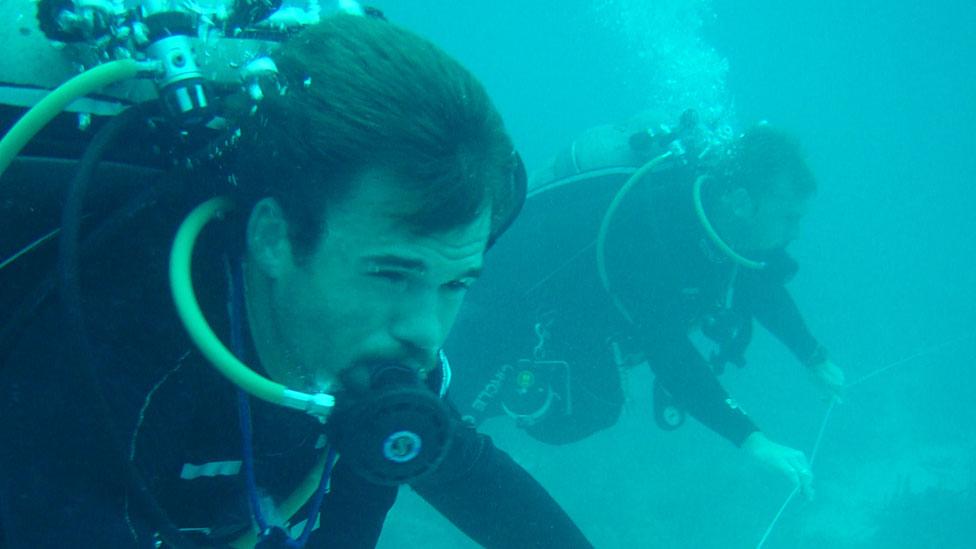 Researchers like Deron Burkepile routinely get wet outside the Aquarius base; the downside, he says, is the nappy rash you get on your skin (Deron Burkepile)

The idea of living underwater is often brought up as a possible future for humanity. Some have proposed submerged settlements as a way to preserve civilisation in the event of a global catastrophe, or to avoid overpopulation. Meanwhile, developers are already planning submerged hotels in locations including the Maldives, Dubai, Singapore and Norway. These developments may one day live up to the romantic notions many have of life beneath the waves, but what’s it like to live underwater today?

More people have been in space than have lived underwater to do science. In the 1960s Jacques Cousteau’s team built the first underwater habitat called Conshelf I, and two men spent a week inside the drum-shaped enclosure 37ft (11m) below the surface. Their next iteration was Conshelf II, which, in 1963, was installed off the coast of Sudan (see video, below). This time, scientists spent 30 days in the star-fish shaped structure.

The biggest challenge early divers and engineers faced in building and living inside these structures was understanding the effect of breathing pressurised gas for long periods of time. Experiments designed to work out the effects of living in hyperbaric chambers, in which the air can be compressed to mimic conditions at depth, began in the 1930s.

A few years after Cousteau proved that people could live underwater inside a chamber for a month at a time, the US Navy built its experimental habitat Sealab I off the coast of Bermuda, 192ft (56m) underwater. Since then, there have been a handful of other underwater labs including the Tektite habitat and Hydrolab, but Aquarius is the only one still running for scientific researchers. Burkepile is one of the few who have worked there.

While the science and technology has certainly improved, there are a lot of things that haven’t changed much since the days of Cousteau’s Conshelf program. Underwater habitats are still very cramped, and the environment is harsh.

Aquarius has only about 400 sq ft (37 sq m) of space inside, but it feels even smaller when you’re sharing it with five other people and a whole laboratory’s worth of equipment (take a tour of Aquarius in the video below). “I tell people it’s the size of a school bus, but that’s actually probably too big because inside there are tables and scientific equipment,” says Burkepile.

Researchers have to eat in shifts, and squeeze by one another through narrow hallways. Hot water is limited, showers are short, and the bathroom is separated from the main compartment by little curtains. Food is mostly freeze dried or peanut butter and jam sandwiches, and nothing can be heated with a flame. Burkepile describes how, on one mission, none of his group was brave enough to eat some mysterious freeze dried eggs from the Russian space programme likely to have been left behind after a Nasa trip to the base.

Researchers at the Aquarius are essentially on their own when it comes to fixing things that break. There’s no underwater hardware shop or lab stock room to visit. Burkepile likens it to the year-long trips explorers once took to the middle of the Amazon. “It’s not that long and it’s not that remote but it definitely can be that challenging.” 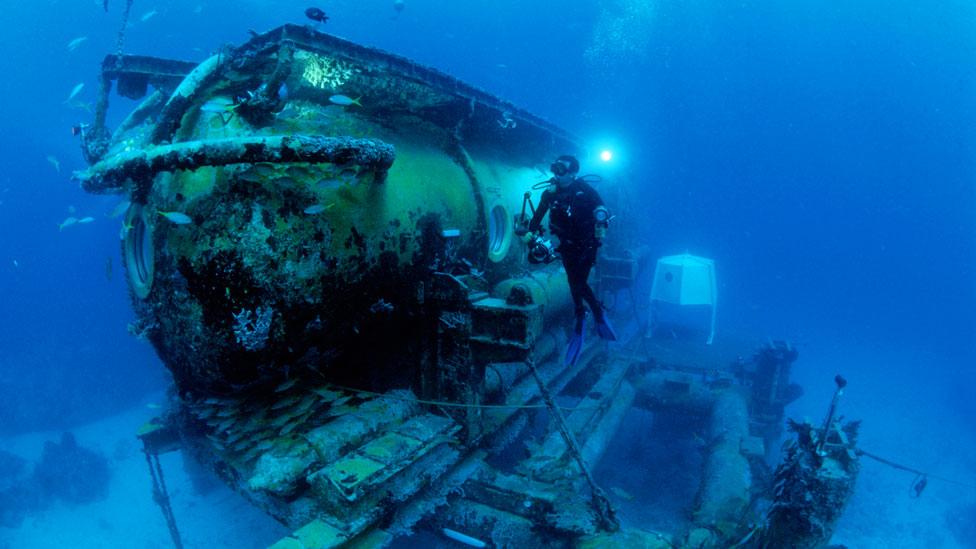 If maintenance is necessary on the Aquarius underwater lab, researchers are more or less on their own (Getty Images)

While underwater, teams come and go from Aquarius without having to resurface, diving with normal scuba gear and tanks, only for much longer periods. “A 10-day mission lets us do about three to four months of work at that depth,” Burkepile says. For his team, that means more time to understand how global changes like overfishing and climate change affect the health of coral reefs. The Aquarius team is thinking about hosting a 30-day stay this summer, a full 16 days longer than their longest trip to date.

But a mission of this length is not to be taken on lightly. “After a couple of days your wetsuit starts rubbing on your elbows and your knees and your joints.” Burkepile says. “You get raw. It gives you diaper rash on your back and chest. By the 8th or 9th day your skin is waterlogged and paper thin, and you get cut easily, and you’re cold. Your body isn’t really meant for that kind of exposure.” By the 10th day, he says, “we were ready to come up.” 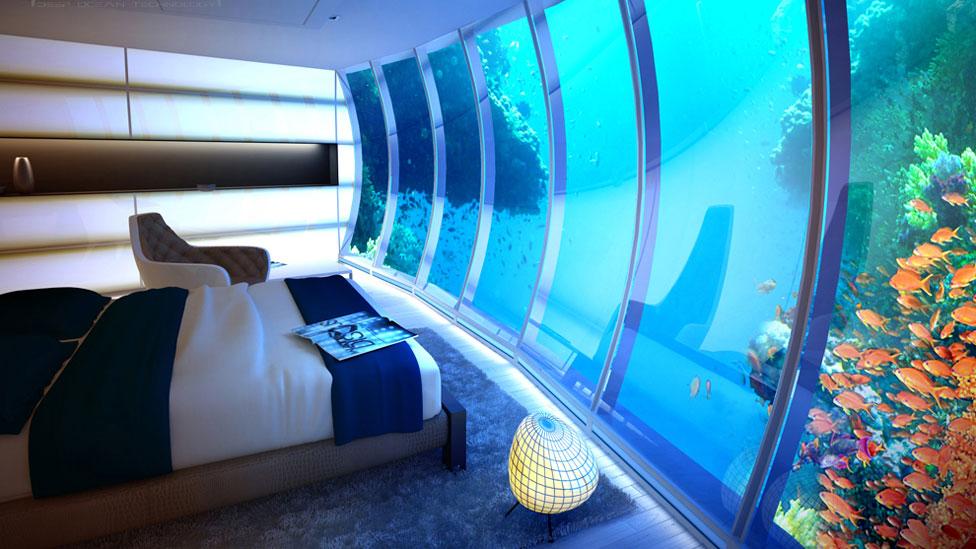 Will it always be this way? Today, there are a handful of companies building underwater resorts. From the Poseidon Undersea Resort in Fiji to the Discus Hotel planned in Dubai, developers are well aware that some people find the allure of living underwater hard to resist. Both of these include elevators to take guests down to the station, larger living quarters, hot showers and a handful of other amenities that, once completed, will probably make life a lot more comfortable than time spent at Aquarius.

Despite the lack of such luxuries, Burkepile would still happily face the harshness of an extended stay at the submerged lab one more time. If offered a 30-day missions he’ll jump at the chance – cramped quarters, skin rashes, cold and all. “The unique perspective of being underwater for that long,” is irresistible, he says. “I couldn’t turn something like that down.” 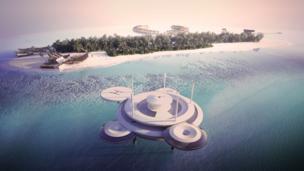 Can we build underwater cities? 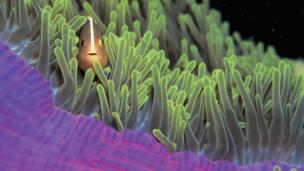 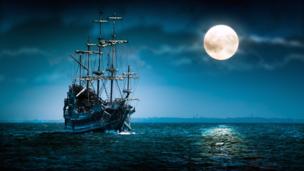 How do you find a ghost ship? 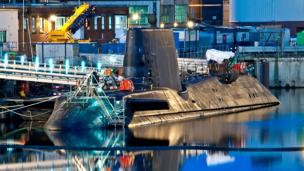 How to build a nuclear submarine